Common has never been an artist to shy away from activism. Cultural moments like the present – when Black Lives Matter has moved from Twitter to city streets to the biggest pop albums of the year – are where the veteran MC shines, and his new album Black America Again shows off his abilities to use personal experience to reflect the greater issues of systemic racism in America.

“These projects from Beyoncé, Solange and Kendrick Lamar have the artists looking at a bigger picture,” the Chicago rapper tells Rolling Stone over the phone. “It feels like it’s bigger than them, too, sometimes. I created this album not thinking I want to be the dopest MC but thinking, ‘Man, I really wanna uplift people. I wanna move people closer to God and activate people towards making a better world.’ That’s a ‘we’ agenda. I just want to use the music and the art to connect me to do more things and to help people.”

What effect has winning an Academy Award [for “Glory” from ﻿Selma﻿] had on your music?
Because I received an Oscar award for something that was dealing with socially conscious issues and the fact that I was talking about God, the people, us moving forward and the struggle of black people, I felt like that’s who I am. The fact that it was received on a big stage like the Oscars encouraged me even more to be who I am and to dig deeper into things that I want to say and things that are meaningful. It let me know that people had a desire for art that is uplifting and conscious and beautiful. It also let me know that people have a taste for art that is high level. And that [conclusion] didn’t come from just my experience, but when I had seen ﻿Hamilton﻿ and reading ﻿Between the World and Me﻿ by Ta-Nehisi Coates and when I went to the Sistine Chapel and seen all these different walks of life there appreciating it, I thought, “People throughout time really appreciate art that has truth in it and that’s done in excellence.” It led me to the direction where my heart is and where I truly feel my voice is used the best at.

Your Oscar win felt almost like the beginning of a new black art renaissance in the mainstream, with albums like Beyoncé’s ﻿Lemonade﻿ and Solange’s ﻿A Seat at the Table ﻿capturing a mixture of black pain and black triumph. Black America Again﻿ fits into a year where tales of the African-American experience are more visible than ever — did some of these other albums have any influence on you as you told your own story?
I think as black people, we’ve experienced so much injustice and pain in this country. And then when you think about it, it’s not like every white person hates black people in this country. It’s only a select amount of people that don’t appreciate diversity or other nationalities or cultures. I think for artists to speak up right now in particular is really critical because we’re at such a critical time in the world. Not putting it in comparison with the Sixties, but it means so much now because everything is being brought to the surface. As much as you have all these people speaking up in certain ways that seem racist, you also have people celebrating black culture and saying things that are empowering to black people across America. That’s inspiring! We need to hear that we are great people and are a part of this country. We do have a voice, and it is OK to wear your hair the way you want to wear your hair.

When you get Beyoncé creating a visual album celebrating black culture and black women, it’s important that young girls of all nationalities see that. Those images are powerful. Then Solange, just by being herself and by expressing her experiences of what it is to be black, it creates an understanding. Then you have artists that don’t only say, “I’m black,” but talk about their experiences in new and fresh ways like Chance the Rapper. He talks about God, and that’s bringing the black experience without saying, “Hey, I’m black.” When you listen to my album, it’s really an expression of who I am as a black person. It’s God, love, fun, joy, jazz, blues and all these different colors of what black America is from my experience and my interpretation. 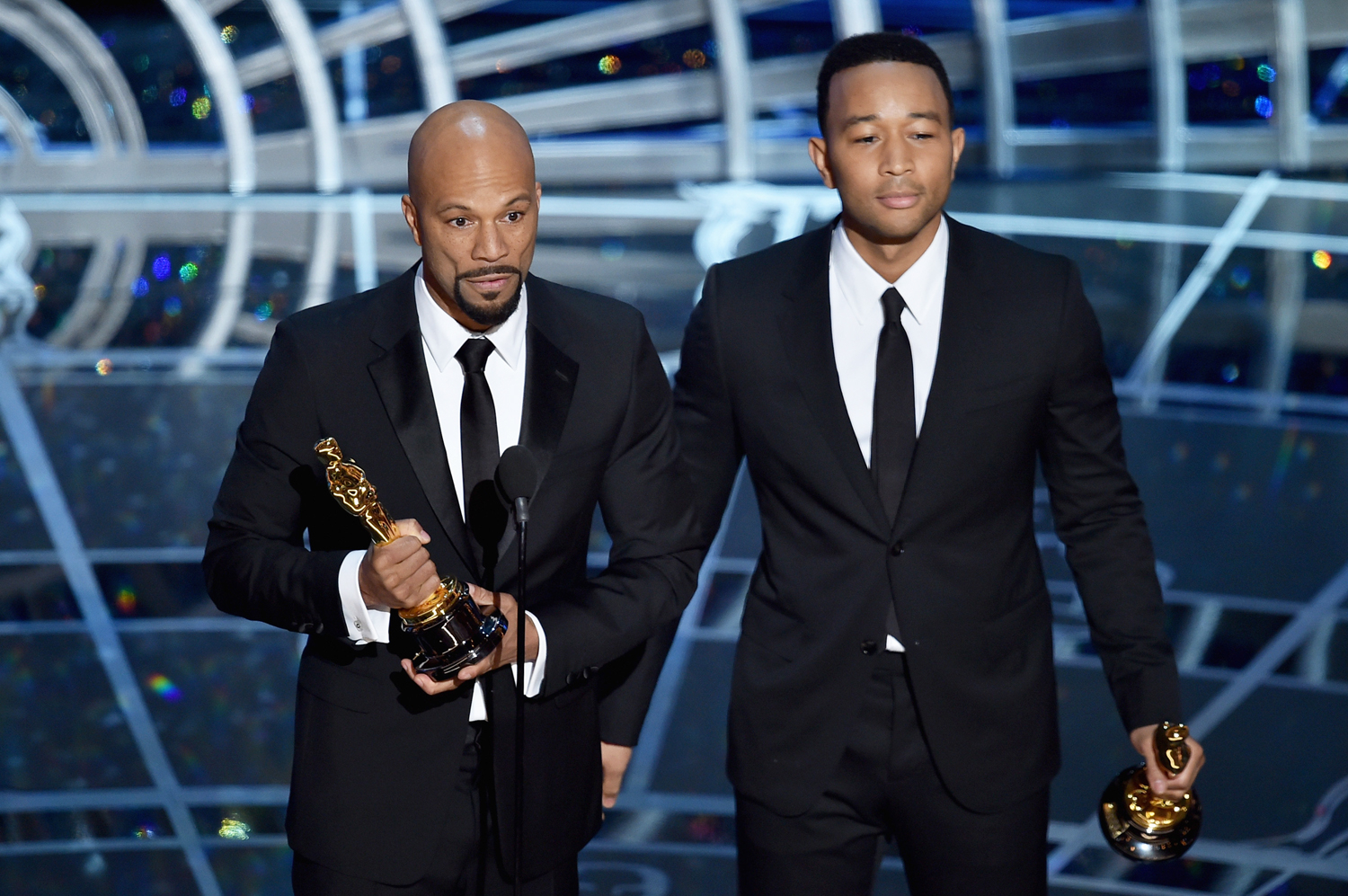 One of the most personal songs on the album is “Little Chicago Boy.” Can you tell me about that touching track?
That is a tribute to my dad. My father was from Chicago and grew up in Chicago, and he played a little basketball. He was a Gemini, so he had all these sides to him. We had a beautiful relationship, but I didn’t grow up with my father and wasn’t around him a whole lot. All our talks meant something to me. All the time I spent with him meant something to me. His words were very powerful. My father passed in September 2014. He died of cancer and had been working doing different natural things as well as working with doctors just trying to cure it, resolve it. It affected me, but I understand that was his transition. I didn’t really talk too much about it because, you know, it’s a process. I was working on a film that Judy Greer was directing called ﻿A Happening of Monumental Proportions﻿, and I was playing this father in the movie and it made me think about my father and our relationship. I usually don’t write when I work on a film, but I started writing on my day off. When I listen to that song, what I love about it is it’s honest and it’s not painting this picture of my father as a perfect human being because he’s not perfect; I’m not perfect. It’s stating the love that we shared and the dynamics of who he was as a person and how his spirit affects me now. I think it’s another way of reflecting the black experience.

What is the significance of the album title, specifically adding the word “again”?
So “again” just means that when you look at some of the injustices that have happened within the past seven months, year, two years, it’s all just part of a cycle of how black life gets treated. It’s been marginalized, dehumanized and devalued. Whether from the beginning when slavery was put on black people to Jim Crow to mass incarceration, it’s always been putting black people in the position of second-class citizenship. That cycle that continues is the “again.” ﻿Black America Again﻿. It happens ﻿again﻿. “Again” also means writing a new story. We acknowledge that these things have happened, but how do we write a new story for ourselves? How did this country write a new story?

The song “Black America Again” is also a call to action. I’m talking about things like “Maria Sharapova makin’ more than Serena.” C’mon … Now that’s changed recently, but is that where we should be? I know we’re talking about millionaires, but it’s still like, “That doesn’t seem fair.” You’ve got the greatest tennis player in the world and someone who hasn’t reached that level making more money. It’s a symbol of the injustice.

I talk about things going on in Hollywood, and while I think things are going in a better direction, at one point it felt like once a movie got one person of color, that was all. It met the quota. I also talk about being stripped of natural religions and names, pulling a quote from Malcolm X that I heard in a Public Enemy song. “Black America Again” is also dealing with how black people do each other. I’m holding us responsible also, not that we are the source of the problem. I don’t think it started with us. All the violence and lack of job opportunities was not created by us. But now that we’re in that situation, we gotta figure out a way to get out without killing each other. It’s more of a call to action than anything for everyone. We all have to stand up for each other.

While the reasons why we rally are disheartening, it’s powerful to see the way people have come together both on social media and in real life to protest and fight against these injustices. How has bearing witness to movements like Black Lives Matter, and even participating in them, inspired your music?
It inspires me and makes me want to do more. It makes me enthused. When I see Black Lives Matter, I think of how in this era, this is the new movement that will change things. I wonder how I can support it and contribute. I want to be active and use my voice while being there and on the ground. I’m really moved and inspired by the movement. I want to learn from it too. Hip-hop, to a certain degree, is our own movement. This is the new thing and organized differently because of course hip-hop is an art form and culture. This is based in protest and organizing. I want to learn from it.

Earlier you mentioned ﻿Hamilton﻿ and ﻿Between the World and Me﻿. What were some other texts or pieces of art that inspired the album?
When I come across really good writing, it reminds me of what I can do as a writer. It gives me something to strive for and achieve. I think ﻿Hamilton﻿ was amazingly written in a dope, fresh way and told a story that I normally wouldn’t be interested in. It directly inspired me to know that I can use my writing abilities to tell different stories. Also, not one time did I feel like they were trying to ease back the level of rap so people can understand. Like, it was complex raps! Everything was clear and good! It reminded me that if you follow your heart in the art and work at the level that you know greatness to be and use your intellect and artistry, then you’re doing what you’re supposed to do. I feel like I’m doing what I’m supposed to do as an artist. ﻿Between the World and Me﻿ reaffirmed who I am as a black man and is just one of those books that I’ll always keep and always go back to. It took me back to reading James Baldwin. That was another inspiration. I didn’t even read the whole James Baldwin novels. I was just reading pages in his book and was like, “Oh, this is how great writing can be.”

You’ve also been hosting college events leading up to the album’s release. How have those conversations been going?
It’s been magnificent because one of the first places we went to was the HBCU Morehouse College. We screened the short film we made for the album, and then the head of their cinema department interviewed me. The students asked questions. I was so touched and moved by their interest and how intelligent and thoughtful their questions were. I was able to listen and see what they were into and share whatever experiences I had. It felt fulfilling. I went home feeling grateful. When I walked in, most of the kids had on these ﻿Black America Again ﻿T-shirts, too!

﻿﻿Is there a future where you’d want to become a professor?
I would do a residency for a little while. I really enjoy speaking to the younger people. I speak in colleges sometimes already, so I would definitely be into it.