“No men, just sugar.” Clementine Creevy is reading the ingredients of a candy bar she keeps on a shelf in her living room. “Crush men, eat candy,” she continues with a grin as she turns it over to read the other side. The treat is a merch item for the Los Angeles wrestler Candy Pain that she’s been holding on to since she got it at an event put on by Future Ladies of Wrestling (F.L.O.W.). “I can’t eat it!” Creevy says, her large brown eyes widening at the idea. “Never!”

It’s a fitting item for this young feminist role model to treasure. As the leader of the L.A. band Cherry Glazerr since she was 16, Creevy — now 22 — has developed a keen ability to command a stage with her alternately sweet and savage punk rock. “Feminism and music are the two things I’m passionate about,” she says, “I try to keep my life anchored in those two things, because that’s when I feel most myself.”

She’s never sounded more like herself than on Cherry Glazerr’s new album, Stuffed ‘n’ Ready, due out February 1st via Secretly Canadian. It’s full of sharp hooks and sharper ideas, from the satirical take on gender roles in the single “Daddi” to the searing attack on social expectations for perfection in “Wasted Nun.” In the video for “Juicy Socks,” Creevy and her bandmates, drummer Tabor Allen and bassist Devin O’Brien, shred their instruments in a mobile strip club while members of F.L.O.W. wrestle around them. 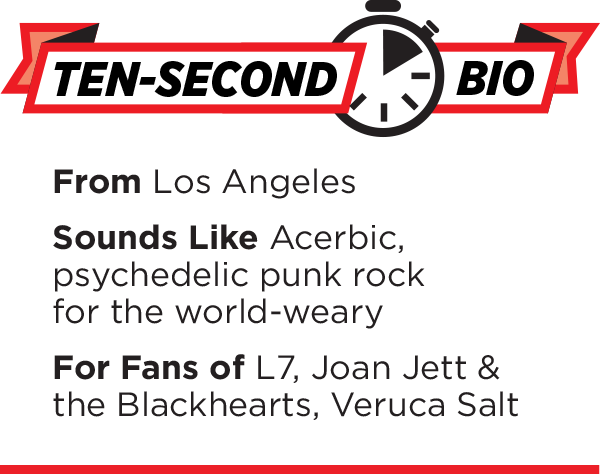 The Candy Pain candy bar is one of several prized possessions on view at Creevy’s cozy Highland Park duplex, along with vibrant artwork by Parker Day and Molly Soda and shelves of records she’s been collecting since she was 14 — Sadé, Butthole Surfers, Captain Beefheart and Cherry Glazerr’s critically acclaimed 2017 album Apocalipstick. “Yeah, they’re all right,” she jokes when she sees it. “The lead singer’s kind of a quack, though.”

When she started Cherry Glazerr in 2013, Creevy and her bandmates were still in high school and making whimsical, noisy garage-pop songs about grilled cheese. They signed with taste-making indie label Burger Records for Cherry Glazerr’s first two albums, 2013’s Papa Cremp and 2014’s Haxel Princess, then moved up to the more established Secretly Canadian to reissue both LPs and release Apocalipstick on Inauguration Day in 2017.

Creevy has always had a sense of humor in her music, but she has also made sure to wield her power in positive ways — writing anthems about female solidarity (“Told You I’d Be With The Guys”), calling out the “outrageous” sexism she and her bandmates have encountered, and discussing the way her body “is commodified in a way that male musicians don’t have to deal with.” She played a musician in the fictional band Glitterish on the award-winning series Transparent, which was lauded as a safe space until lead actor Jeffrey Tambor was fired amid accusations of sexual harassment on-set. “It’s so fucked,” she says, shaking her head. “But it’s such a good thing that we can have these conversations about it not being perfect. I think it’s good that, as a society, we can contend with something having that much dichotomy within it.”

While she’s often stayed away from personal writing with Cherry Glazerr, that’s beginning to change. Where Apocalipstick saw her confidently trying to solve the social and political issues of the world, on Stuffed ‘n’ Ready Creevy lays out all of her insecurities. “At first I was self-conscious about that,” she says. “I was like, ‘Oh no, I’m not being political enough!’ But I think that telling your own story is the most effective thing in affecting a person.”

Stuffed ‘n’ Ready was named on a solo drive home from Joshua Tree, in which she hit upon the idea that “there is never a right time for anything”. Despite that, it is an album for these times, where feelings of frustration, confusion and despair seem to be universal. They bubble up through Creevy’s barbed vocals, which turn from seething to screaming, echoing the barely suppressed rage of L7 or Veruca Salt. O’Brien and Allen’s tightly wound rhythm section adds an underlying tension on which it all rests.

Creevy still struggles to share her innermost feelings publicly. “It’s hard to talk about my insecurities,” she says peering down at the floor. “I didn’t even really know the album was about myself until I finished it and took a step back and looked at it. I was like, ‘OK! All these songs are about my personal experiences and my feelings in life!’”

That doesn’t mean Stuffed is without her trademark comedy. “Daddi” is a blistering, ironic take on the infantilization of women: “Where should I go, Daddi?” she purrs. “What should I say? Where should I go? Is it OK with you? Who should I fuck, Daddi? Is it you?” “Not a lot of people get that it’s a highly satirical song,” Creevy says. “It’s a fully satirical song, a la Zappa. I don’t know what the answers are to make myself feel better about patriarchy. But I know that what I felt was missing was a satirical song about it.”

She adds that she’s found comfort in acknowledging that she’s not in control of either the world or her own emotions. Later on the album, in the song “Stupid Fish,” she taunts herself over explosive guitar riffs: “I don’t wanna try to pretend like I know what’s happening.” “It’s about not pretending like I am not sad and confused and full of existential despair,” she says with a rueful laugh. “Because it’s not going to come across as genuine. I don’t want to be disingenuous. I think that’s a waste of time.”