Maggie Rogers has a lot of memories tied to Sleater-Kinney, from discovering their explosive 2005 album, The Woods, when she was in middle school to driving around listening to them on repeat while on vacation in Iceland.

“I’ve had all these special moments interacting with your work,” she tells Carrie Brownstein, the guitarist-singer of the Portland trio, who’ve been adding nuance and power to their groundbreaking riot-grrrl rock & roll for more than two decades. Rogers comes prepared with questions, which makes sense because she was once an aspiring music journalist, before Pharrell Williams visited her class at NYU and his reaction to her song “Alaska” went viral.

Brownstein, it turns out, is a big fan of Rogers’ debut album, which combines synthy Eighties-style pop with Seventies singer-songwriter introspection. Both Brownstein and Rogers are at pivotal points in their careers; Sleater-Kinney just released their first album in four years, The Center Won’t Hold, produced by St. Vincent. But right before it was released, longtime drummer Janet Weiss left the group due to creative differences. Rogers, meanwhile, is trying to figure out a creative way forward on her second album while touring heavily.

Brownstein isn’t worried about her: “The next thing,” she tells Rogers, “will come around and surprise you.”

BROWNSTEIN I have a lot of “gotcha” questions.

ROGERS I love those! This isn’t a gotcha question, I promise: I was actually at your show at La Cigale [in Paris in 2015]. The show was fucking amazing, and afterward I was just buzzing.

BROWNSTEIN Are you going to tell me that we met five years ago?

ROGERS Sort of! I really wanted to say thank you. I went to speak to you outside and you introduced yourself and asked me what my name was, and you’re the only person who has ever done that in a celebrity context. It has stuck with me in this really powerful way. I want to just say thank you, because it has totally changed the way that I interact with people.

BROWNSTEIN I can’t really operate in a hierarchical dynamic. I don’t want to move through the world as “somebody.” So I just would rather, like, neutralize it as quickly as I can.

ROGERS I don’t even really remember the first time I heard Sleater-Kinney, because it was always a part of my life.

BROWNSTEIN I feel really fortunate you don’t necessarily remember it, because I think a huge privilege of being around for a while is for people to not remember a time without your music. Because that’s how I feel about so many bands.

ROGERS I really powerfully remember reading your book [Hunger Makes Me a Modern Girl]. To read about the experience of a woman doing this in a really hands-on, grounded way was really special to me. And understanding the different kind of road maps this career can take. Because obviously I was never like, “I’m going to get famous off a viral video and then buy a house.”

BROWNSTEIN How could you cook that up in your brain? . . . You’ve been writing for a long time, but this is your first big record. It’s something you think about your whole life, and then you get to put that out there. You should be embracing that because you only get that at the beginning. Later you become aware of precedent, and you start to think, “OK, well, I’ve done that, I did this on this record, so I have to start shifting.”

ROGERS What’s your relationship to precedent? You’ve been making records for 25 years.

BROWNSTEIN I know, it’s obscene. I think the way that people perceived our new record was very troubling for some. A lot of people loved it, and then there were people that had a really hard time with the assertion that we were willing to sort of let go of tools and methodology that people had become very accustomed to within our band. So precedent for me is always something to respect, but to use as something to deviate from. The artists that I love, they always are pushing themselves; they’re not saying by consensus, “Hey, what do you guys want?”

ROGERS Who are those artists for you?

BROWNSTEIN For me, it’s people like David Bowie, PJ Harvey, Nick Cave, Patti Smith. When did you first hear Horses? 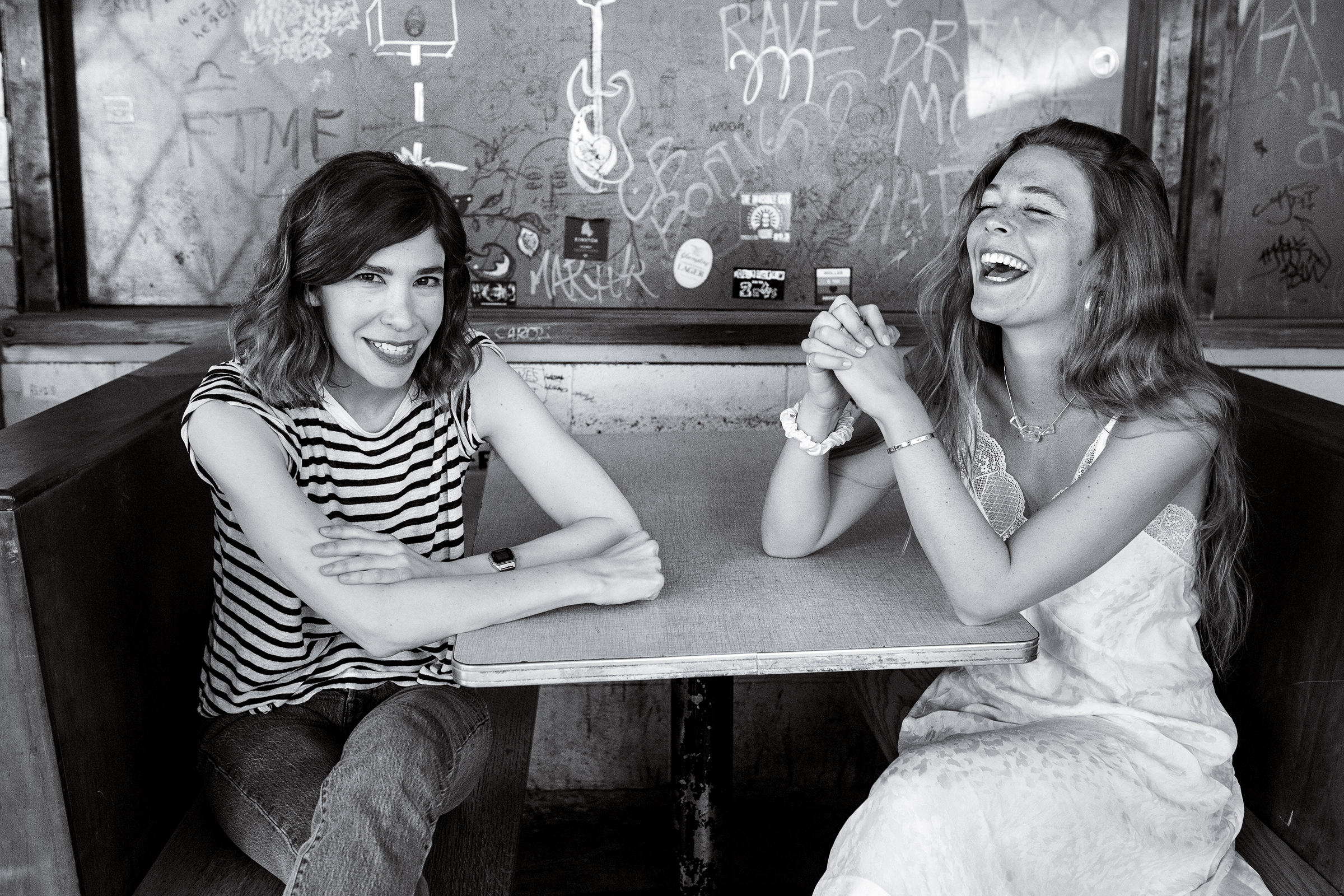 ROGERS I was living on 12th, between A and B, going to NYU. After I heard it, every day I would walk past St. Mark’s Church on my way to school. And I would always think about Patti Smith bringing an electric guitar to that church, at that poetry gathering, and wanting noise to accompany these words that she was writing. There’s so many times in college where I’d be having a weird night and be walking home and I would stop at the church to pay reverence to this creative moment.

BROWNSTEIN You’ve been touring a long time. As ideas start to percolate, where does that energy go? Do they feel urgent?

ROGERS It’s really hard for me to write music on the road, because it’s a really personal process. And it really takes letting my guard down to this level where I can be open. Recently, I realized that when I’m working on a separate creative project before soundcheck, the show is even better because I’m engaged in a different way. Sometimes playing a show feels like I’m only eating one sandwich for a long time. Even though the record came out in January, I’ve been playing the same show for a year and a half.

BROWNSTEIN When I’m working, directing, or writing things that aren’t music, I start to miss music in a way that is very crucial to my relationship to it. There has to be a raw desire for it. Some people aren’t like that.

ROGERS The most inspiring thing I’ve done the past two years was going to motorcycle school.

BROWNSTEIN Me too! How did it help you?

BROWNSTEIN You mean as an outsider? Like being in opposition to a group of people?

ROGERS I think it just made me [remember] that not everyone does rock music. I’ve found [riding a motorcycle] is really helpful when coming home from tour for moderating adrenaline; I don’t just drop off.

BROWNSTEIN Just be careful. I will say just as a PSA, motorcycle riding is very dangerous.

ROGERS I wear helmets. I’m a wide-open-field, back-roads rider. I wanted to ask you, what makes a great creative partner?

BROWNSTEIN Somebody who you can be yourself around, who you can be vulnerable around. Someone that just can call you out on your bullshit. Do you see a door opening where you want to collaborate?

ROGERS That’s what I’m trying to find out right now. I had always done most of my music myself. I had some really incredible co-producers on my record, but there was also this sort of speed-dating texture to it, which was really exhausting and sometimes empowering and sometimes belittling. And it was a very strange emotional dance. I really miss my solo process from high school and college at this point.

BROWNSTEIN The process itself, I think, is really important. It’s not just about what happens at the end, what you put out. You don’t get a medal for the hardest studio experience. . . . From the outside, I think there’s something very powerful in your abilities to sort of do it all. Listening to your album, you are very masterful with synthesizers, your sense of rhythm is really great. Everything to me just feels like, “There’s just a world there.”

ROGERS Do you still have dreams?

BROWNSTEIN Even though it’s been a struggle this summer, with our longtime drummer leaving, it actually has reignited for me just the very basic dream of just being onstage and entertaining people. It’s a reminder that this is really what I want to do. My dream right now is just to be on the road and to remind myself and to remind Corin [Tucker], my bandmate, there’s a reason we’re still here and we’re going to keep going.