Last week, the avant-garde industrial group Laibach became the first-ever Western rock group to perform in North Korea’s capital, Pyongyang. The band, which formed in 1980 in what was then the communist country Yugoslavia and is now Slovenia, performed a short set last Wednesday that was mostly composed of tunes from The Sound of Music and other covers, as well as some Laibach originals at the city’s Ponghwa Theatre and an acoustic set at the Kum Song music school. The shows, dubbed the Liberation Day Tour, marked the 70th anniversary of Korea’s independence from Japan after World War II.

The original idea for the concerts came from a Norwegian artist and activist named Morten Traavik who had previously organized cultural exchanges with North Korea. Laibach asked him to direct a video for their song “The Whistleblowers,” which appeared on their 2014 album Spectre, and when it was completed, he showed it to North Korean authorities who eventually sent the band a formal invitation to perform in the country. The group’s latest video for a song off Spectre, “We Are Millions and Millions Are One,” is streaming at the bottom of this article.

When Rolling Stone asks the group’s Ivo Saliger why the group wanted to do the shows, he asks his own question, speaking for the band: Who wouldn’t want to embark on such an experience? “There is no second chance to play in Pyongyang for the first time,” he says. “Laibach has, since its very foundation, been dealing with totalitarianism in all its manifestations; therefore visiting North Korea was absolutely a must-do.'” Here, he explains all he and his bandmates learned from their trip.

What were your first impressions of North Korea when you arrived?
Our first impression of the country was, “This is just like we expected… but it is somehow completely different.” A few days later, we were thinking about an option to be able to “live and stay there to reach the higher wisdom in ourselves.” The country may be poor and isolated, with a heavily oppressive political system, but the people are fantastic and they seem to possess the precious wisdom that we don’t.

How did the country’s government receive you?
Of the higher-ranking state officials, we only had a direct contact with the Korean vice minister of culture — also a music composer himself — who couldn’t speak English much, so our communication was very formal and polite.

Did you meet with any heads of state or get any communication from Kim Jong-un?
No, there were several party officials and foreign ambassadors at the show, but we were not in touch with them.

Did the government provide handlers or minders to watch over you?
Our group of 30 people was taken care by five Korean “helpers, guides and translators,” who also made sure that we did not act “too freely” and vanish in the night. They were all very helpful and not at all a nuisance.

What were your interactions with them like?
Generally very easy, smooth and kind, even with the people who did not speak any foreign language. There were more problems when we were building the stage set for the show, primarily because of a lack of equipment and cables, but everything was fine in the end.

How did the general citizens of North Korea treat you?
They treated us without exception with utmost respect, kindness and generosity.

What did you like and dislike about the country?
The general people of Korea are definitely the brightest jewel in the country. We couldn’t find any cynicism, sarcasm, irony, vulgarity and other “Western characteristics” in their eyes, on their faces and in their behavior. It was nothing but sincere modesty, kindness, proudness and respect. There was no military parade for the 70th Anniversary of Freedom, only people dancing gracefully instead everywhere on the streets and parks of Pyongyang.

Traffic policewomen are big fun to observe. They perform the most intriguing biomechanical, almost robotic ritual in the middle of the crossroads, probably all day long.

What we didn’t like is the fact that we were not allowed to move around freely, but in a country that is almost hermetically isolated from the outside world and thus from all the media pollution, foreigners are toxic subjects that could potentially spreading their ideological disease to the inhabitants of this communist Utopia, the collective “Truman show.”

“What misconceptions don’t Westerners have about North Korea? It’s a country everybody in the West loves to hate.”

Americans in North Korea are, for instance, not hated at all, but welcomed. And Koreans do not equate the American people with U.S. governmental policy. Entering North Korea is not that difficult at all. As a matter of fact, it is generally easier than entering U.S.

Pyongyang, which was completely bombed and erased during the Korean war — of course by the American warheads — is today a beautiful, clean, well-kept and colorful city with impressive architecture and parks.

North Koreans laugh, smile and joke a lot and people across the country are incredibly well and “dignifying” dressed. They learn foreign languages; children begin to learn English at the age of seven. Koreans are keen to open up to the outside world, but they want to do it slowly, on their own terms, and in a very different way than the Chinese.

What would surprise people about North Korea?
They produce excellent beer. It is actually considered a soft drink and microbreweries there are popular. You can also drink beer freely from an open container outside on the street and smoke inside hotels and bars without a risk of prison. Pyongyang, with the rest of the country, is also probably the safest place in the world to walk around — if they let you walk around, of course. And for those who are into cannabis, North Korea is a very liberal place, where possession of cannabis is in fact essentially legal. 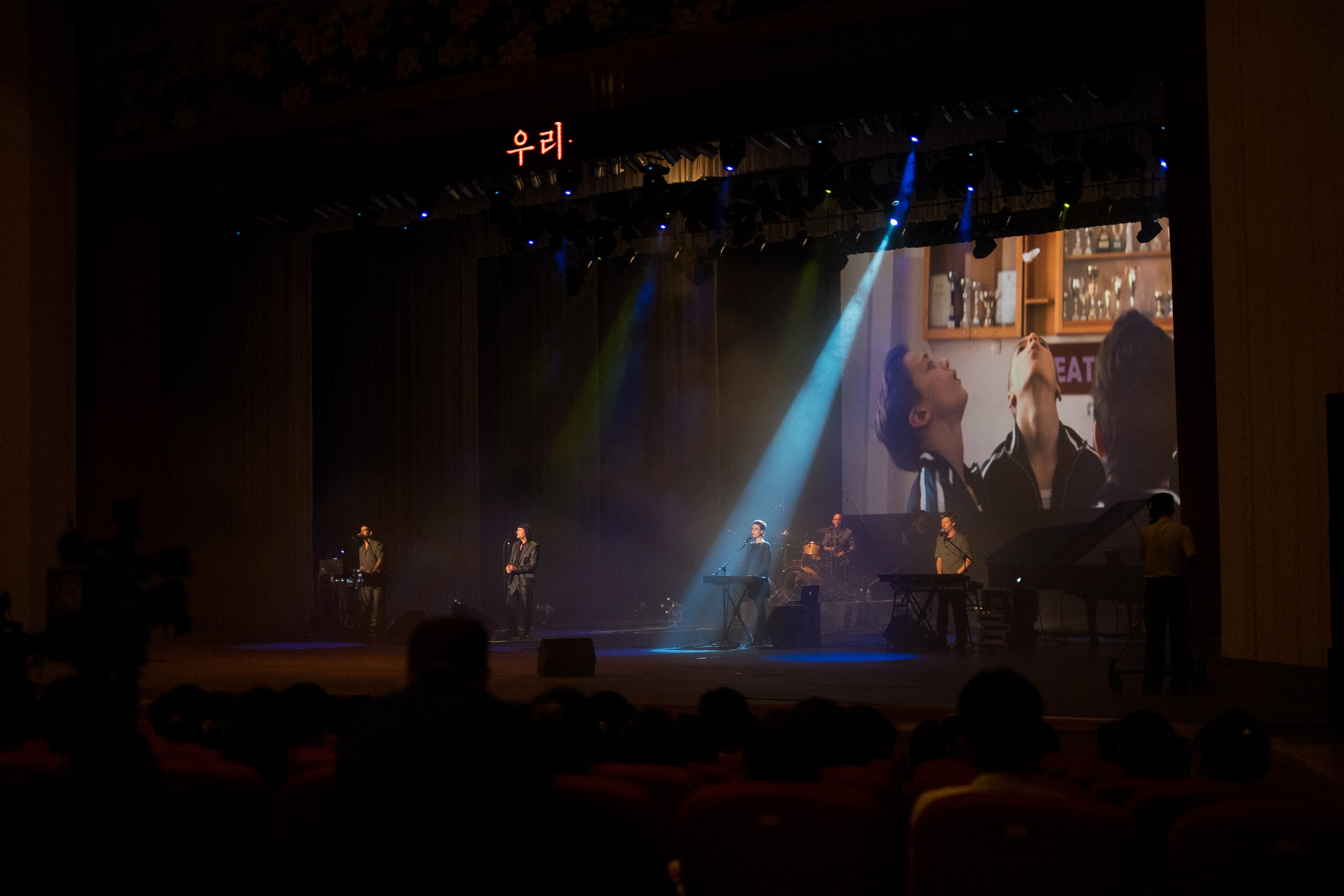 How did the audiences react to the concerts?
Koreans had never heard such music before, so they didn’t really know what to think about it. But again, they reacted politely, applauding after every song, and at the end of the show, they gave us standing ovations. (Maybe they were happy that it was over. The Syrian ambassador certainly didn’t like the show much — he commented that “It was too loud — almost like a torture”).

At the second show, which happened at the Kum Song music school, Laibach members performed two songs acoustically, together with Korean school musicians. The rest of the performance was actually a show-up program by the school itself, which performed in honor of Laibach. The music was incredible, and we’ve heard everything from Seventies Japan sounding lollipop beats to experimental electroacoustic, almost Arca-like style of music, performed on electric guitars and synths, in combination with their traditional instruments. Morten Traavik, who also performed with Laibach, “stage-dived” at the end of the show and — as a sign of gratitude — he brought a gift to the school, a new Moog theremin.

How did you adapt your concert for a North Korean audience?
We wanted to perform something that would make sense to a North Korean audience. The majority of the program was therefore based on our versions of songs from the film The Sound of Music (“Do-Re-Mi,” “Edelweiss,” “Climb Every Mountain” and “Sound of Music”). On top of that, we performed a selection of Laibach classics (“Life Is Life,” “Final Countdown,” “Across the Universe,” “The Whistleblowers”).

Why did you want to play songs from The Sound of Music? Did the audience sing along?
No, they didn’t sing along, but they moved their heads a bit on “Do-Re-Mi.” Doing The Sound of Music was an old idea of ours, and North Korea is just the right context for it, because the population there knows this film well, they learn English with it at high schools and they even did their own Korean versions of certain songs, so they pretty much knew what we were talking about. Sound of Music can have a very powerful message within the context of Korean liberation from Japanese occupation, and it can of course also be understood differently, even in a more “subversive” way. We’d wanted to perform a version of “How Can We Solve the Problem Like Korea,” but we were not sure if they’d understand that they have a problem to be solved at all.

What about the Beatles’ “Across the Universe”?
They loved it, and it actually sounded very subversive (“Jai Guru Deva, om/Nothing’s gonna change my world…”), especially with American rockets launched on the projection at the back.

How did the audience receive your visuals?
The censorship committee had problems with many of them. They don’t like to see any nudity or potentially aggressive images, but we still managed to keep most of projected visuals within the original form. The audience is actually used to Korean rockets and explosions, because that is what Korean popular music and military groups use as a back projections on their concert shows.

“After the concert, an elder Korean citizen told us, ‘I didn’t know that such music existed in the World and now I know.'”

You did a Korean song, too, right?
We wanted to present three important and well-known Korean songs: “Honorable Live and Death,” “Arirang” and “We’ll Go to Mt. Paektu.” In the end, their censors asked us to take out “Honorable” and “Mt. Paektu,” because we had changed them too much from the originals, and they are extremely sensitive about their own culture.

Finally, what did North Korean civilians think of your music after the concerts?
There was this brilliant quote by an elder Korean citizen. After the show, he told us, “I didn’t know that such music existed in the World and now I know.”