Legendary psych-punk sons of anarchy the Butthole Surfers have begun work on their ninth studio LP, their first in more than 15 years.

“It has never been done. No one has put out a decent record 35 [years into their career],” vocalist Gibby Haynes tells Rolling Stone. “Well, except for Johnny Cash. But we’re not Johnny Cash. It’s gonna be a tough road to do a record that’s presentable. It’s really gonna be hard. … But given that, looking forward to it!”

Initial writing and recording has begun in the Austin guest-room-turned-home-studio of guitarist Paul Leary for the album, which they hope to release by next summer.

“It kind of feels the same, which is sort of an empty void of all emotion,” Leary tells Rolling Stone. “I kind of divorced the thought process from all of it because thinking has never served us well. It’s gonna be all over the map once again, there’s gonna be rock songs and there’s gonna be some ambient things and some really stupid things. So, I imagine in that respect it will probably be like a lot of the other Butthole Surfers albums. … A couple of old songs will probably make it to the record from our old albums, except done in a completely ridiculous format. “

40 Greatest Punk Albums of All Time

The new album, their first since 2001’s Weird Revolution, will reunite founding members Leary and Haynes with drummer King Coffey and bassist Jeff Pinkus, four-fifths of the line-up behind 1987’s debut Locust Abortion Technician. That landmark LP has been name-checked as a favorite of Kurt Cobain, John Frusciante and Dean Ween, sampled by Kid Rock and Orbital, and is partially responsible for more than 30 years of the places where punk, noise, psychedelia, Dadaism and juvenile humor intersect.

“There’s some pop stuff, but there’s a lot of songs with no real agenda,” says Coffey of the new material. “It’s like noise with, like, just throbbing beats to it. It’s kind of, in a way, what we’ve always done. We try to scatter ourselves all across the board.”

“We’re not in a position like a lot of other bands. Like, take Metallica. God bless ’em, I love Metallica. But all they gotta do is put out another Metallica record. The same thing with Foo Fighters. That’s all they gotta do is put out another Foo Fighters record. ‘Cause, I mean, they’ve got a sound. Or, they’ve got a song,” says Haynes, laughing. “If it ain’t broke, don’t fix it. But I guess we’re just continually broken and in a struggle to fix it. So, it’s gonna be a wild one.”

Leary says he and Coffey have begun initial recording, with three songs that are “just about finished” and rhythm tracks recorded for about 15 more. Haynes, who lives in Brooklyn, will join them in Austin later this year. The re-energized Surfers have signed to Artist Network Management, which will release the record on their in-house label, Five Music Inc. The label’s first release will be a remastered 30th anniversary 10-inch, featuring four songs from Locust Abortion Technician, due this November. The company says re-releases of the Surfers’ indie-label albums are forthcoming; Leary is hoping for a box set featuring “a bunch of weird stuff that’s never been released before”

The Butthole Surfers spent the 1980s as the American underground’s most notorious live act, a nomadic carnival of terror featuring – at different points – strobe lights, footage of autopsies and surgeries, nudity, fire, fake blood, stuffed animal destruction and a wiffle ball bat that flung urine. In 1991, the band fired shotgun blanks over the heads of audiences at the first Lollapalooza tour. As veterans of the counter-cultural rock music that hit mainstream exposure that year thanks to R.E.M., Nirvana and others, the band signed with Capitol as one the unlikeliest major label deals in history. 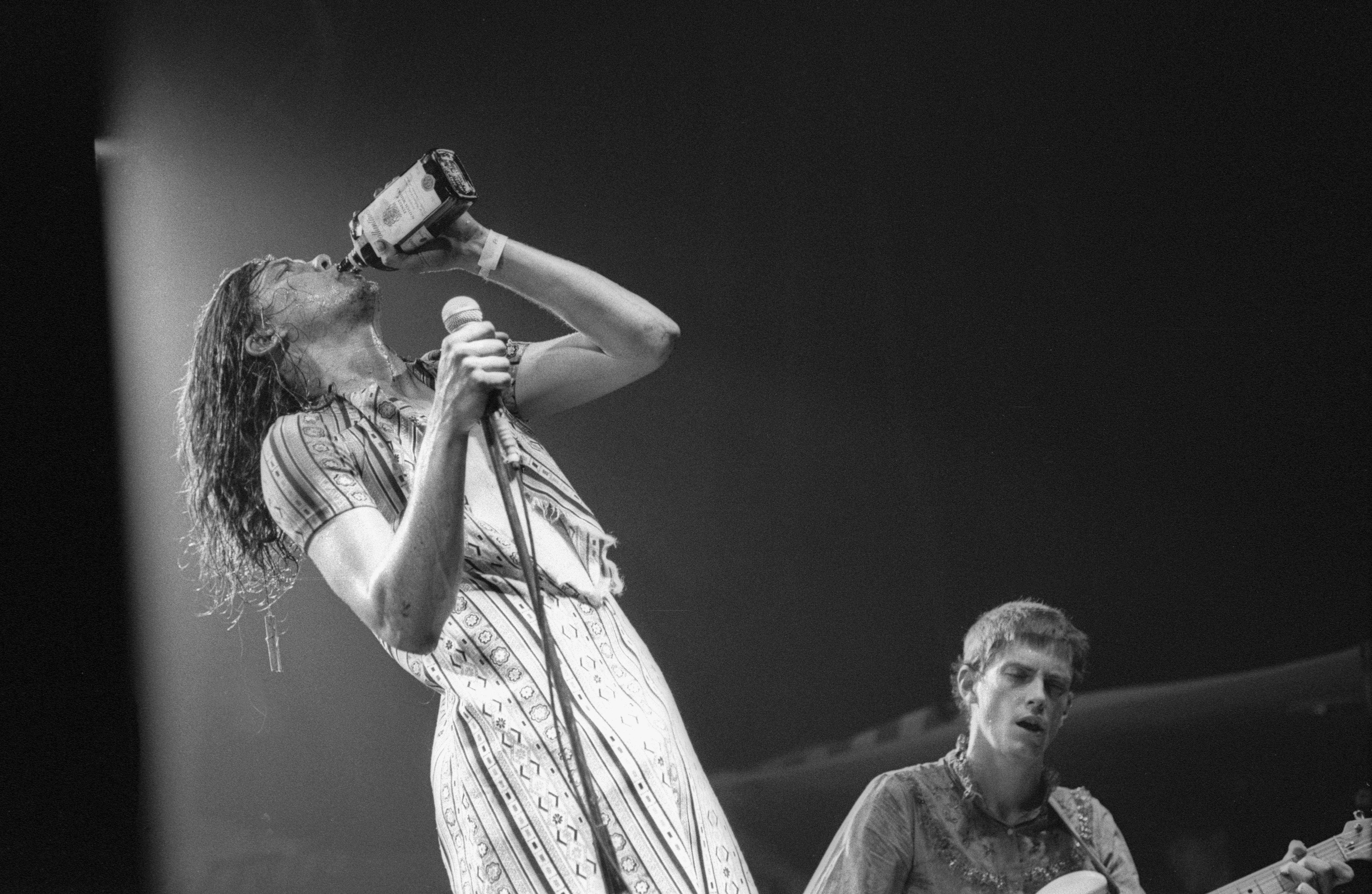 “Have you seen the footage?” asked Haynes of a YouTube clip from that year, “It’s trashing the dressing room at Lollapalooza where it’s just like screaming voices and pieces of a trailer just being torn apart. They charged us $20,000, but it wasn’t our dressing room. It was Nine Inch Nails and they had a mobile home for their backstage. We gutted the place in seconds and then we attempted to drive it into the ocean. But the cool thing about that one is that both River and Joaquin Phoenix were in the dressing room helping us do that.”

In 1996, the Butthole Surfers had a Modern Rock Number One hit with the shimmering rap-rock song “Pepper,” and soon David Letterman was saying “Butthole Surfers” on live national television. Their crossover moment, however, proved short lived. They recorded a follow-up in 1997, but spent years in legal purgatory. The band sued (and then were countersued) for the rights of their catalog on indie label Touch & Go, originally secured in the Eighties via handshake deal. Their relationship with Capitol fell apart, and they were contractually barred from recording elsewhere. They were sued by ex-manager Tom Bunch and countersued. Eventually, Hollywood Records bought the group out of their deal and they re-recorded much of the album; it was released as the electronica-tinged Weird Revolution in 2001 to commercial indifference and critical savaging.

“That was a pretty painful experience, that whole record,” says Leary. “I think it was like getting an albatross off from around our necks. … We were on Capitol and nobody at the label really knew how to handle us. … And we were just kind of weird to them, so they always just left us to do our own thing. And then we this radio hit in ‘Pepper’ and next thing you know, there’s people lined up around the block tellin’ us what to do and how to do it.”

“We were so ground down by the whole process of putting out that record,” says Coffey. “We just wanted to take a break.”

“It was just so nice to go sit home and take a breath and do some other things besides what we’d been doing for the last 10 years,” says Leary.

That break turned into years of near-silence. Leary continued producing other bands, while Haynes released an album in 2004 as Gibby Haynes & His Problem.

Says Haynes, “I think everyone just associated the band with, like, unpleasantries.”

“Our booking agent would always be calling us saying we’ve got offers for shows and my answer was always, ‘No, I just don’t wanna do it,'” says Leary.

Starting in 2008, the band began tip-toeing back into the limelight, doing a handful  of shows with the classic 1987 lineup, including second drummer Teresa Nervosa. (On why Nervosa isn’t currently joining the band for the upcoming album: “It’s easier to record one drummer instead of two,” says Coffey. “It’s just us being lazy, I think. She may join us at some point, but for now we’re just taking the path of least resistance.”) 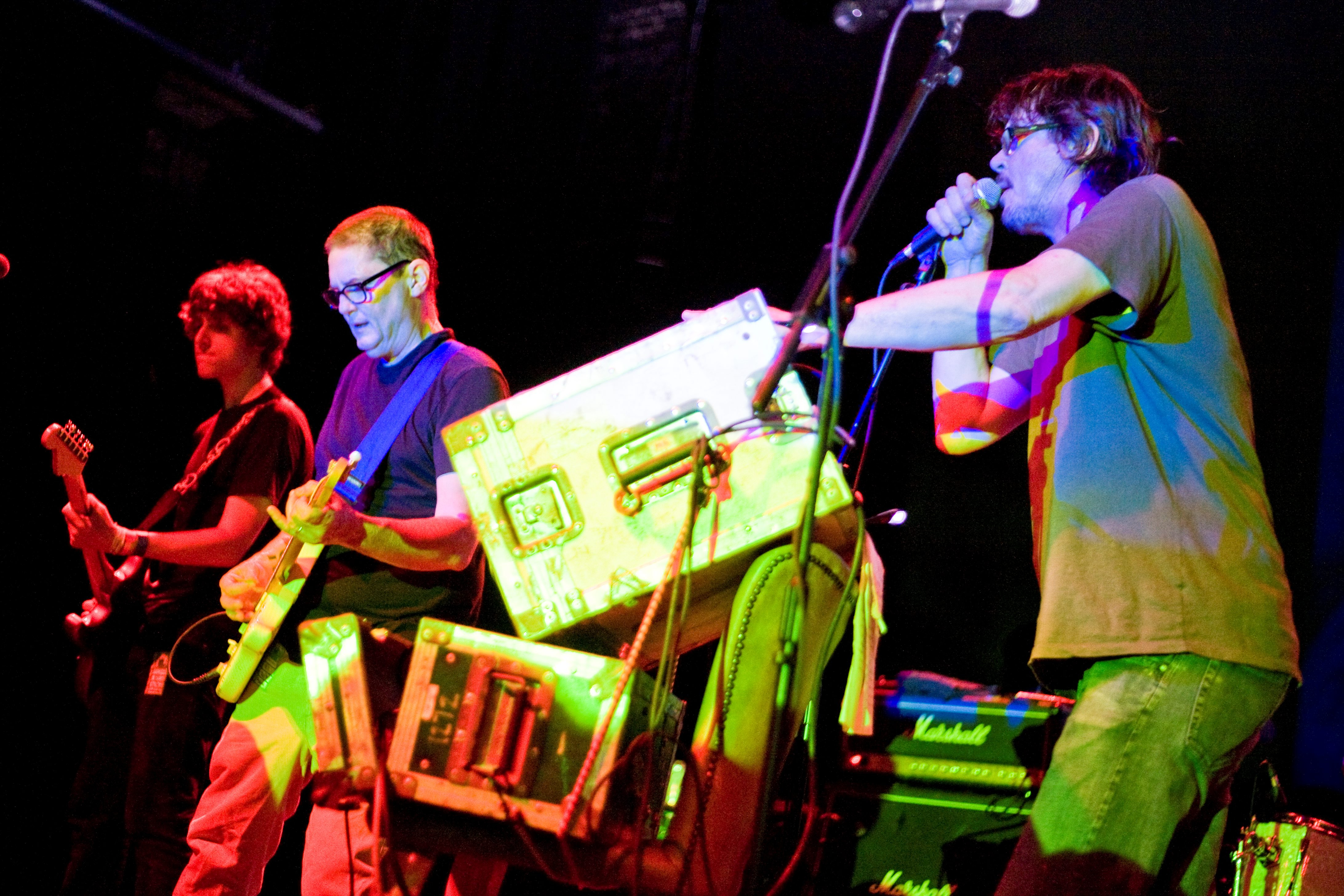 These dates included the infamous All Tomorrow’s Parties show where, in 2009, festival founder Barry Hogan said, “Killing Joke and the Butthole Surfers will never play ATP again, and they can both suck my balls.”

“All these fans made me drink a bunch and I was just tooootally hung over and I went to get breakfast. I probably hadn’t been to sleep but 15 minutes,” explains Haynes of what he perceived as the defining incident. “I was sitting across the table from King and I was just totally nodding off. I was asleep basically. I’m sure it wasn’t that great of a look, but some security person came up to me and started really hassling me. Sort of unwarranted. And then she pushed me, so I wet my finger in my mouth and then put it in her nostril.

“I remember we were playing two shows at the Fillmore in San Francisco [that year] and I told my buddy John Frusciante, I was like, ‘Dude, come up to San Francisco because it’s gonna be the last show we play,'” says Haynes, “I felt real bad … because then we played a couple show in L.A. a year or two after that. I think we had enough fun getting together again and playing those shows that we wanted to play some more.”

The Surfers have played in the years since, most recently at Houston’s Day for Night festival in December of last year, but warn fans not to hold their breath for a full tour supporting the 2018 LP.

“Our last tour was six or seven years ago and it felt terrible,” says Leary with a laugh. “I will probably never tour again, it’s just not fun. It was more fun back in 1986. It seemed like the nicer the hotels and tour buses the less fun it got.”

Though they won’t return to life as a travelling virus of chaos, the band does see similarities to their scrappier days in the new music.

“We were living in a van half the time,” Coffey says of the scrappy 1986-era sessions for Locust Abortion Technician, “but also in Winterville, Georgia where we didn’t know anyone, and there was no furniture in the house and there were sparks flying across the room because the electricity was so bad. Paul got an ancient 8-track one-inch machine and we began recording stuff in little bits and pieces. Almost all the drums on that are really just one floor tom and one snare, because we only had eight tracks to work with. Definitely we have better accommodations now, and a better studio and probably more knowledge on how to record. … But I think the approach really isn’t that different as far as doing it bits and pieces and grabbing ideas where we can.”

“It’s just like back when we were recording ourselves, and putting out the records on an indie level and just having fun, with really no pretense of trying to write a hit or be commercial,” says Leary. “We’re just doin’ what we wanna do, so it’s been very, very fun.”