Kanye West, Facing Harsh Criticism, Is at His Most Successful - Rolling Stone

In 2013, Kanye West made his ambitions known. Between taking shots at Hedi Slimane and sincerely asking what Lady Gaga knew about cameras as a stunned Zane Lowe looked on, West talked about money — the money he no longer had, the money he needed to knock down barriers, and, most important, the money his future business would one day accumulate.

Six years later, West’s Adidas Yeezy line is speculated to make $1.5 billion in sales, according to Forbes (Nike’s Jordan brand clocks around $3 billion in sales, mainly from the cultural cachet built up over three decades). West is estimated to be the highest-paid hip-hop act of 2019 with $150 million in pretax earnings, also according to Forbes. The TMZ slavery tirade, the Make America Great Again shenanigans, the Bill Cosby defenses, the bipolar diagnosis announcement and retread, the reconciliated-and-then-reheated Drake beef, the endless tweets and rushed albums and albums that never came to be and albums we simply had to wait for — none of it mattered. The predictions were wrong. West didn’t piss away the perceived goodwill he’d garnered after years of success, or at least he didn’t for a wide, crucial swath of his (paying) fanbase.

A Year Later, Lil Nas X Shares the Challenges of Coming Out

On Friday, West released his ninth studio album, Jesus Is King, a megachurch masquerading as a 12-song tax-shelter bar bonanza. The gospel project springs directly from his traveling religious experience, Sunday Services. Naturally, many are writing the entire enterprise off as the Chicago artist trying to create an excuse to avoid paying the federal government for his accumulating wealth, and with bars like “The IRS want they 50, plus our tithe . . . That’s why I charge the prices that I charge,” who could blame them. But much of that skepticism misses the point. Conservatively, faith-based organizations in the United States make $378 billion annually and, less conservatively, are valued at $1 trillion to American society, according to a 2016 Georgetown University and Newseum Institute study. Big religion, megachurches, and the large amount of capital they generate are merely another spoke spinning in Kanye’s hopeful trillion-dollar wheel.

At the nadir of his musical influence, Kanye is financially more powerful than he’s ever been, thanks to a half-decade spent trying to ingratiate himself into a specific hemisphere of wealth and power. He’s pleaded with Facebook’s Mark Zuckerberg to give him $1 billion over Twitter, tried to implore a group of Detroit art school students to leave Elon Musk alone during the height of the Azealia Banks controversy, sought out LVMH’s Bernard Arnault to back his fashion line. Most infamously, he became one of President Trump’s most vocal supporters at a time when his administration discriminated against various people of color, immigrants, and religions. The closer Kanye aligned himself with some of the most damaging, and profitable, forms of capitalism — religion, the far-right, tech companies — the more his business boomed.

Despite the “conscious rap” umbrella that characterized his early music, the central theme of Kanye’s music has always been consumption. His first hit, “Jesus Walks,” is ostensibly about Jesus, but it’s also about how Kanye’s Christian-themed song isn’t getting played on the radio (it, of course, eventually was) and by extension how that impeded the young rapper’s finances. “But if I talk about God, my record won’t get played, huh?/Well, if this take away from my spins/Which’ll probably take away from my ends” reads differently today. In 2004, “Jesus Walks” sold Kanye, a newly viable rapper, as an amorphous product. Fifteen years later, it’s all more tangible. At Coachella this year, you could buy $50 socks emblazoned with the phrase “Jesus Walks.” At four Jesus Is King: A Kanye West Experience events held in Detroit, Chicago, Los Angeles, and New York, in honor of an album that missed two release dates, he sold Christian-inspired sweaters for $140. And on Friday at midnight — despite continued, frantic promises — West’s Jesus Is King was nowhere to be found. The merch launch tied to the album, though, was available right on time. 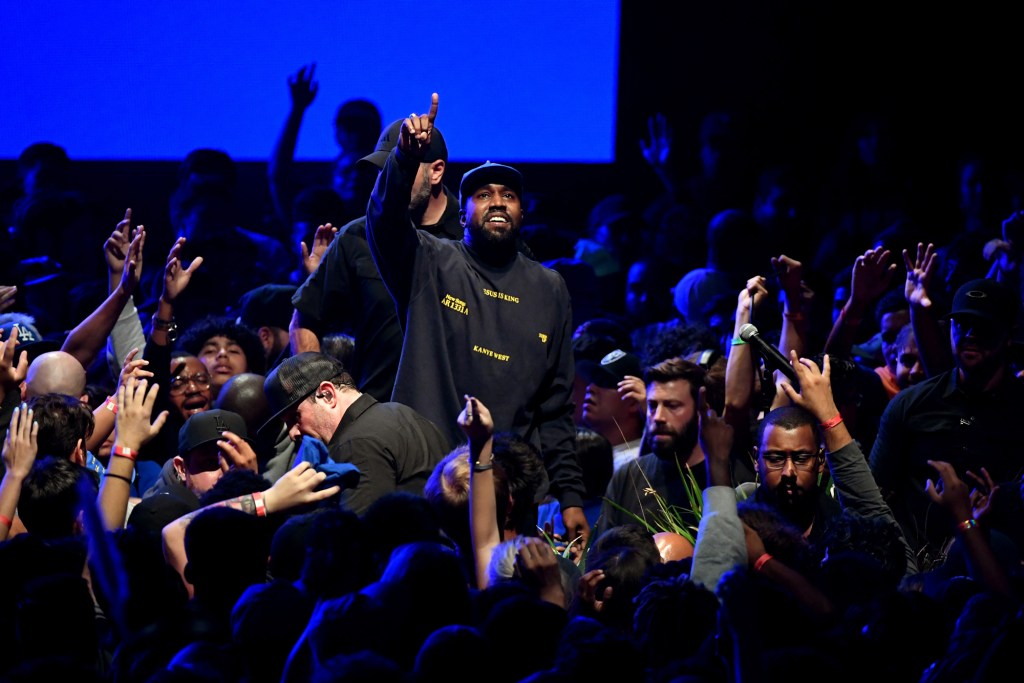 Kanye West performs onstage during his Jesus Is King album and film experience at the Forum, in Inglewood, California, on October 23rd, 2019.

At the 2016 VMAs, during his acceptance speech for the Video Vanguard Award, West revealed the historical lineage he’s trying to penetrate.

Kanye is fully aware of the surface-level traits these men share, that typically go beyond his “artists, merchants” description — old, white, male, millionaires or billionaires, with power culled from pioneering in an industry or high government positions. It’s unclear if West is aware of the more sinister side of most of these 20th-century titans, and the numerous accusations of racist and anti-semitic actions and beliefs leveled against some of them. It might not matter if he did.

At the Jesus Is King events, Kanye previewed a documentary about his goal to build affordable housing and discusses the genesis of the work-in-progress commune and what it could mean to humanity. At one point, West describes that he’s not trying to remake the “Industrial Revolution,” but jumpstart the “communal revolution.” He is convinced that the interconnected dome-shaped domiciles will solve a myriad society ills. Everything from the installations to Kanye’s clothes is covered in the same clay, browns, and tans that have been the hallmark of his Yeezy clothing line. It’s meant to be a West-engineered utopia, but as the saga unfolds onscreen, it resembles a cult built of ego and an intense desire for control — a societal monument to Kanye West, where his savior complex can flourish. For that reason, it was clear why the brief movie was played before an album like Jesus Is King.

Six years after Kanye and Lowe’s most infamous meeting, they sat for a two-hour conversation at the Chicago mogul’s new Wyoming property. The interminable interview runs the gamut between the inane (Kanye telling a story about leaving his new number on Drake’s porch) to the maniacal (West also admits when he’s president he won’t forget how members of the elite like Zuckerberg, Arnault, and Jack Dorsey treated him). Most tellingly, Lowe asks West if his Sunday Service is a church. Predictably, the response is cagey with the exchange ending with a “well, we have a pastor now.” Forty minutes later, the topic of Sunday Service the religious experience, Yeezy the company, and the implications of intertwining the two is broached again.

“How proprietary can you be in an environment where you serve the Lord?” Lowe asks. “This idea of trademarking Sunday Service, which ultimately is a term, you created an environment, which is communal and belongs to everyone. It isn’t just a Kanye West show. But there’s the idea of ownership over that term. How does proprietary behavior exist in a time of ultimate servitude?”

“Everything is for God, and we can receive donations. That’s the only way that it can work,” Kanye answers.

“So the money you make from the merch is in donation to the cause,” Lowe replies.

Kanye hedges and trips his way into a nonsensical answer. What he claims he’s trying to “solve” is a moral and mental minefield to try and refurbish Yeezy the business into Yeezy the church, and the trillion-dollar goal remains. While it’s becoming clear that West may not be the kind of genius many believed — or hoped — he was, one thing is certain: He’s become a better salesman than anything else.