“I was someone who wanted to go to a top college, an Ivy League school by American standards,” says RM, BTS’ leader. “I was a typical student who was trying hard to achieve. And then I trusted [HYBE founder] Mr. Bang, and I started to walk down a different path. And I had a sense of urgency and desperation about going after my dreams.” RM’s gifts as a rapper, songwriter, and producer have been essential to BTS’s development, as have his wide-ranging intellectual interests. In an interview from his label’s headquarters, the artist formerly known as Rap Monster discussed whether BTS should be considered K-pop, the uniqueness of South Korean hip-hop, the highlights of the Most Beautiful Moment in Life era, and more.

BTS Arrive in LA for String of Shows: Here's Where to Find BTS Tickets Online

(In celebration of BTS’ appearance on the cover of Rolling Stone, we’re publishing individual digital covers with each member of the band; check back throughout the next two days for more.)

You quoted the great abstract artist Kim Whan-ki recently: “I’m Korean, and I can’t do anything not Korean. I can’t do anything apart from this, because I am an outsider.” You said that was a key thing you’ve been thinking about lately. How does that idea apply to your work?
So much of the pop and hip-hop I listened to came from America. But for me, as a Korean, I think we have our own characteristics and some kind of localized identity. I can’t really explain it very well, but there are some characteristics that we Koreans have, or maybe Eastern people. So we try to kind of combine those two things into one, and I feel that we created a new genre. Some may call it K-pop; some may call it BTS, or some Eastern-Western combined music, but I think that’s what we’re doing. If you think about the Silk Road in the past, there’s this idea of Eastern people and Western people meeting on some kind of, like, big road and maybe doing selling and buying of stuff. I think this story repeats itself, and some kind of new, interesting phenomenon is happening. We feel very honored to be existing in the very eye of this big hurricane.

There’s so much great Korean hip-hop, including your early heroes Epik High, who are still active. What did you hear in it early on, and what do you hear in it now?
There’s always a process of when something new comes into another culture, where the identity gets transformed and it changes and adapts to this new place. Obviously, there are differences between Korea and the United States that affect the music. For example, Korea is not a multiethnic country like the United States. So there are different sensitivities that are underlying the music. Korean rappers of course have their own unique and different lyricism, their own situations and hardships that they fit into the process. As a Korean, obviously, these are the things that resonate with me.

Obviously, there’s a saying there’s nothing new under the sun. So especially for people like us, in the margins of the world, so to speak, we think about how can we transform this and how can we make this our own. So these are the things that I think about when I try to balance the inspiration of Korean and American rappers. And, I think, now though, there’s a convergence of all genres of music. 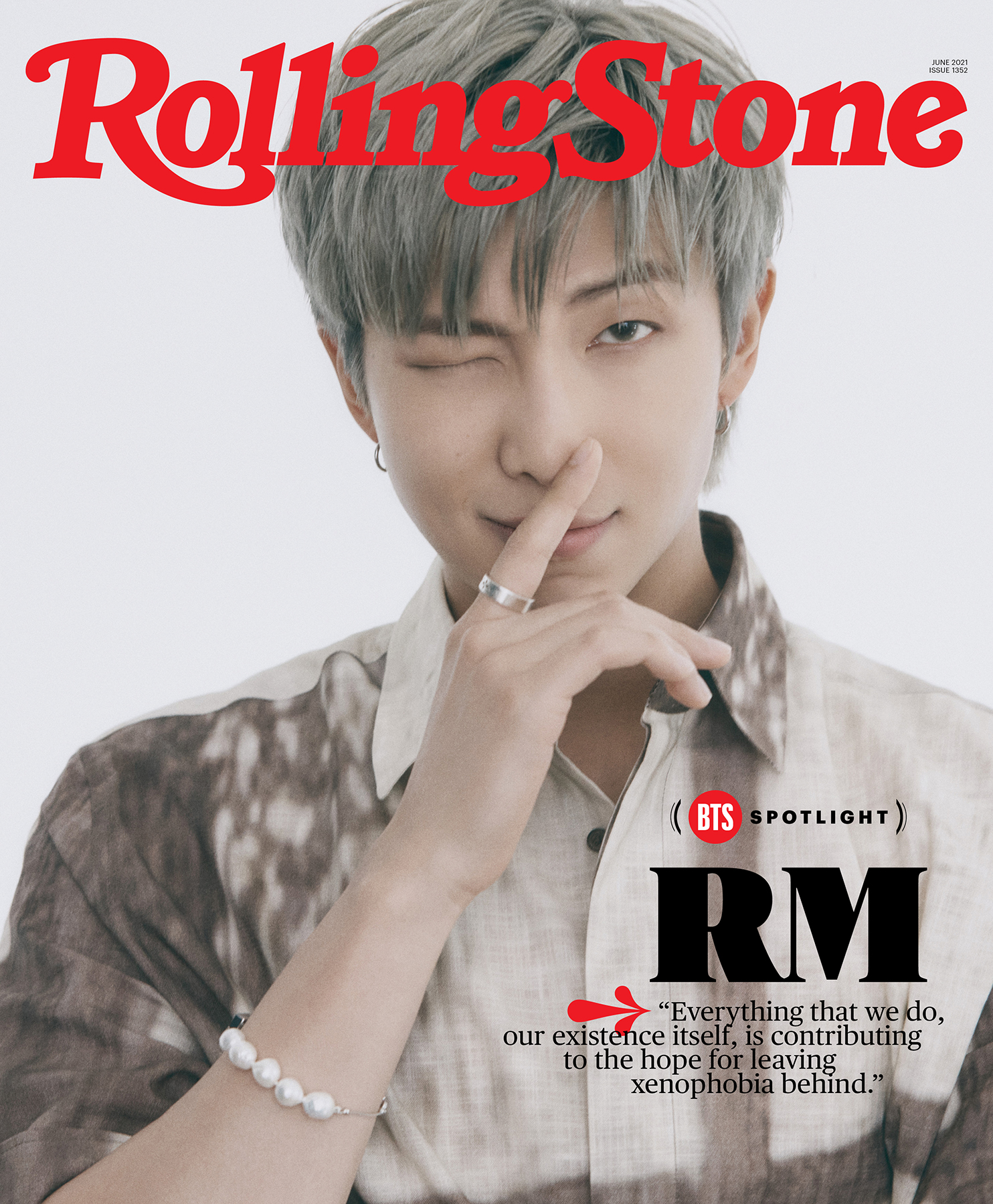 When BTS first started, there was this conflict in some people’s minds and in your own between the idea of being a rapper or being an idol, which we’d call a pop star. This is obviously something you’ve addressed in song. Maybe you can explain a little about that conflict and why it seemed so important at the time?
When I was young, I wanted to be a writer of prose and poetry, and then I found rap. And a lot of what I wanted to do went into the music. And, yes, there was this idea of being a pure artist or a pure rapper. So in the beginning, it is true that when we were debuting as a pop act, there were times when I had to sort of reorganize my identity and then reflect on what my identity is. And at the beginning we didn’t see positive results. We didn’t have a lot of fans. We didn’t have great results. There were some times when we were mocked.

So it is true that it took some time for that identity to develop and settle itself. But, you know, whether it’s rap or pop music, or whatever it is, it is another method for me to show my mind and express my voice, and having that resonate with people. So a lot of that conflict resolved itself. And I think things today are very different from what they were like in 2013, because even though there’s still a lot of discussion about what is pure, what is authentic, what is sincere, what’s an artist, what’s a pop musician, those boundaries have become less and less meaningful. As long as I can show what I’ve written, it’s valid as the continuation of my dream and what I always wanted to do.

It feels like BTS really found itself around the time of Most Beautiful Moment of Life. That’s where everything came together. How do you look back on that time?
Despite the name, Most Beautiful Moment in Life, that was actually a very tumultuous period for me and for us. There was the tough image we had in 2 Cool 4 Skool, in those early stages, a sort of exaggerated expression of toughness and that angst. And then we sort of slowed down a little bit and tried to express the emotions of young people who have really nothing more than dreams. It was a more honest sort of expression, and we witnessed how it was resonating with a lot of people.

There was some confusion because this was something new, and we were showing ourselves to be more vulnerable, more delicate, which was very different. But we realized that it was meaningful, and as we went forward to the Love Yourself series, we started to discover that more and more as we continued.

I know that many fans don’t see BTS as part of K-pop. And you, yourselves, have said that “BTS is the genre.” How do you see it?
That’s a very important debate. Because what they call K-pop, that genre is expanding very fast. For example, some so-called K-pop groups have only foreigners, from Europe, India, China, like, everywhere. There are no Korean members, but they do the K-pop thing, they’re switching the parts, and so on. BTS is expanding very fast as well. And K-pop is now so wide. Somebody could say that K-pop is for Koreans who sing a Korean song. That could be K-pop. But what about “Dynamite”? We sing the song in English. But we’re all Koreans, so somebody may say it’s a K-pop song. Or they may say it’s just a pop song, because it’s in English. But we don’t actually really care about whether people see us as inside or outside K-pop. The important fact is that we’re all Koreans, and we’re singing a pop song. So that’s the reason why we said that our genre is just BTS. That debate is very important for the music industry, but it doesn’t mean very much for us members.

What music really changed your idea of what’s artistically possible?
I started with Nas, Eminem, the golden age of hip-hop. And the turning point was Drake, in 2009, when he released So Far Gone. That album was kind of shocking for me because it was kind of a freaky thing that a rapper actually sang. So after that a lot of rappers began to sing, deciding to put the melodies into their songs across the genres, between raps and melody. So, yeah, that was the moment.

I know you motivated the members by saying that your grandkids might watch your Grammys performance someday. Is that something you think about often?
It gives me a lot of goosebumps sometimes that our every moment leaves traces online where everyone can see them. So, yeah, I think that helps us keep motivated.

Some film actors have a saying, “Pain is temporary. Film is forever.”
[Nods.] Life is short. Art is forever.

In This Article: BTS, BTSCovers, RM