Brian May on Tour, Queen Biopic, 'We Will Rock You' Legacy - Rolling Stone
×
×

As Queen tour North American arenas with frontman Adam Lambert this summer, guitarist Brian May says it feels almost like déjà vu. “A lot of the times, it does feel like the old times because it’s become as big as the old times,” he says. “I feel very privileged and very fortunate that we can play arenas. It’s on a scale actually that’s bigger than anything we ever did. It’s big and it’s dangerous and it’s live as it ever was. We’re not a museum piece; we’re a living entity.”

The band kicked off its summer tour in late June and will be making its way around the U.S. through early August, playing a set that covers many of their greatest songs. “I remember Prince saying, ‘Too many hits, too many hits,'” May says. “It’s a nice problem to have. We’ll be throwing in a few songs which people won’t have seen live for a very long time; the problem is what to leave out.”

He says fans should expect “vintage ‘Americana Queen’ from the glory days … the era when we were kind of hitting that spot with the American public” with songs like 1977’s “We Will Rock You” and “We Are the Champions.” The band has also been playing the odd Lambert solo song and even a tune from May’s 1993 solo album Back to the Light. “It’s become pretty much as flexible as the old times,” says the guitarist, who recently put out another solo release with singer Kerry Ellis, titled Golden Days. “We don’t play to backing tracks or clicks, so we can go off and do what we like. We know Adam well enough now to be able to hold that together. So it does feel like the old days. But obviously it’s new, because you’re playing to an audience who are sons and grandsons and daughters of the people we played to in the 1970s. And we are a little older.” He laughs. “Not much, but a little older.”

Interestingly, he says he recently found peace with the band’s current place in the world by seeing a band that were roughly Queen’s American counterparts in the Seventies. “I took my kids to see Aerosmith not too long ago,” he says during a wide-ranging chat with Rolling Stone. “Aerosmith are, in some ways, quite parallel to us. Everything is real and live and dangerous and there’s no safety net. I was just watching my kids’ faces and thinking, ‘I don’t have to apologize for this. This is the real thing.’ I feel that we are unquestionably the real thing. We are what we are and it won’t be perfect, but it will be something that you never quite saw before. It’ll be something of the moment.”

What should fans expect from the tour?
If they’ve seen us before, they will be very surprised because the show will look very different from anything that we’ve done before. We were very keen to embrace advances in technology and all the new toys. Although the show has certain retrospective elements, it’s gonna look very new. And we have a phenomenal singer to add to our armory; Adam is something quite extraordinary in so many ways.

What do you mean by “retrospective elements”?
Well, people want to hear the hits. So there’s an obligation, which is a very pleasant obligation, but it’s nice to change it up and keeps all of the songs alive. Also, there’s a video element, which we’ve been pre-planning. Video screens are cheap now, so there’s a lot of video content. The video will be very much interacting with us; it will be intimately connected to what’s onstage and what’s off it. I don’t want to give too much away, but there will be a certain retrospective element, which connects with some of the glory days of when Freddie was with us. So there will be echoes of the past in a new way.

You’re not talking about a hologram, are you?
No, not holograms. We have experimented with holograms, and we haven’t found that they give us what they want. And most of the things that people call holograms are not actually holograms; they’re Pepper’s ghost. We prefer things which are more flexible in a live situation. So, no. We’re not doing holograms [laughs]. We’re doing other stuff.

“We Will Rock You” turns 40 this year. Can you describe the feeling of an arena stomping their feet and clapping their hands to that song?
[Laughs] The “We Will Rock You” and “We Are the Champions” audience-participation thing was something kind of astonishingly new at the time. When that song was born, concerts were not interactive in that sense. You went to bang your head and not much else; you did not sing along to a Led Zeppelin show. But we found that people were singing along already at our shows at a certain point, so the first reaction was, “Hey, what’s wrong with this? Why won’t they shut up? Why won’t they just listen to what we’re playing?” [Laughs] Then there was a new realization that this is something amazing. People are participating in what we’re doing, and the show is becoming as much an audience thing as a band thing. So, that’s where “We Will Rock You” and “We Are the Champions ” came from, and that’s where the “Radio Gaga” thing came from later on. And I feel thrilled that it happened, and I’m proud that it has, because it’s become something universal now.

And in a certain moment in our history, it really worked well, like in the Live Aid situation, where we played to an audience which hadn’t known that we were gonna be on the bill. Tickets were sold before we were even added. And yet, they knew exactly what was expected of them when “We Will Rock You” or “Radio Gaga” happened. They all sang along to “We Are the Champions.” That was a big moment of realization for us, that that had broken through to something more than a rock audience – like a public consciousness. 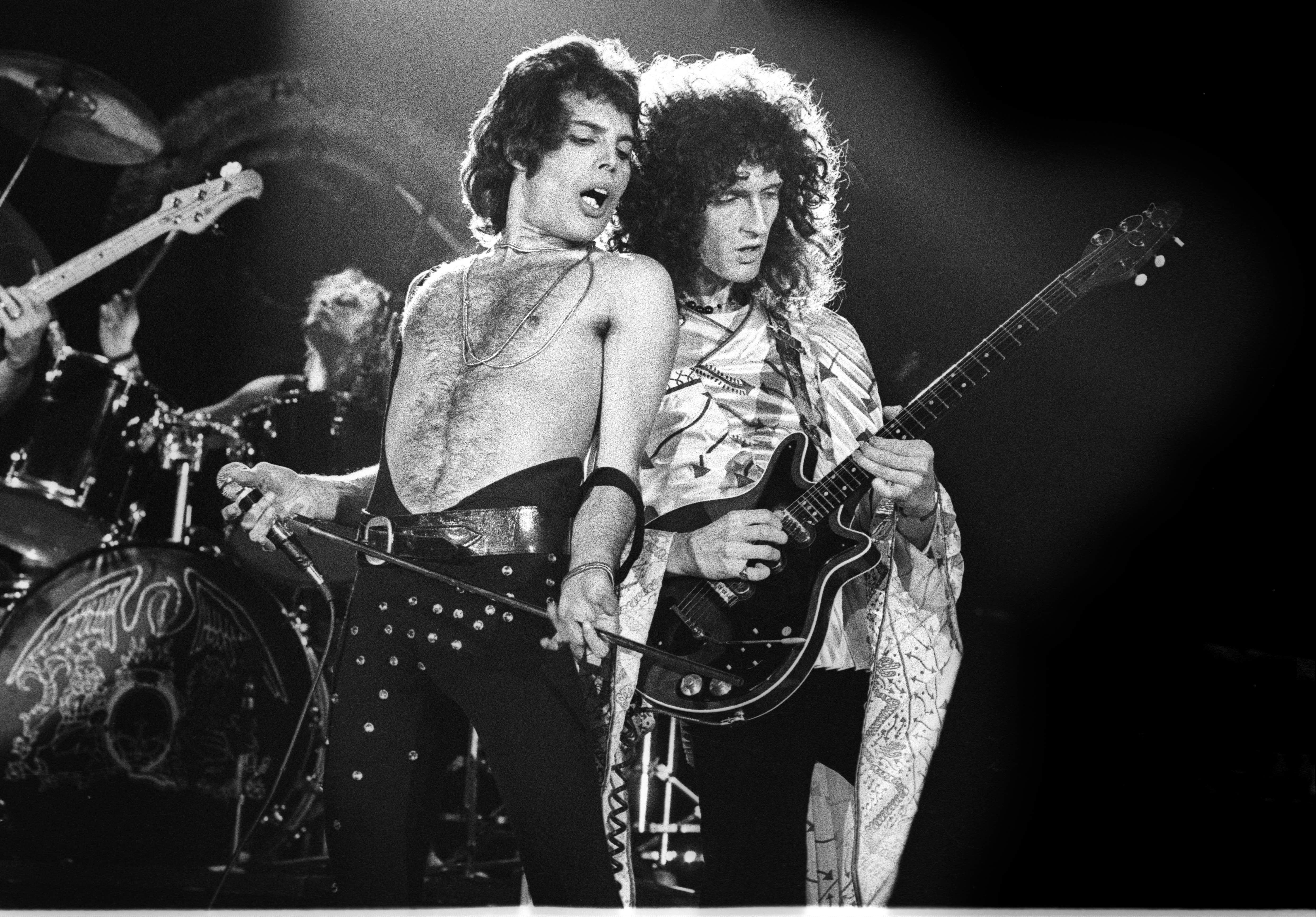 Now you hear it at football games.
Yeah. Everywhere, all around the world. And the funny thing is, those songs really weren’t written with sports in mind, specifically. I think we were aware of the possibility, but really it was more about our audience. Our rock audience. We were becoming aware that we could empower everybody.

Your last big tour with Freddie was over 30 years ago, in 1986. What do you miss about going out on the road with him?
It’s like losing a family member. In a sense, you get over it and life moves on, but in a sense you never get over it because you’re always aware that something is missing. And we were together as a band longer and closer than probably any of our marriages. I’ll obviously miss Freddie till the day I die, as a friend, as a colleague and someone to creatively bounce off. He was, I believe, truly extraordinary.

We have our star. We have Rami Malek as our Freddie, who I think will be incredible. He has a great presence, and he’s utterly dedicated to the project, which is wonderful. We’ve spent a little time with him. He’s completely living and breathing Freddie already, which is just wonderful to see. And we have a fabulous producer in Graham King, who’s probably the greatest independent producer in or out of Hollywood. And he’s put together a great team. And we have a really, really great script. Finally.

So we sort of sit there like the grandparents of the project in a sense. And we’ll be taking care of the music, supervising the way it’s done, which is another great project. But we’re not really making the film. We’ve stayed with it for the last 12 years to shepherd it to the right place where we feel it would do Freddie justice. We only get one shot at this, and that’s it.

Beyond the film, what are you working on?
Well, I’ve just spent three years writing a book, which is called Queen in 3-D. It’s based around these stereoscopic images that I took all those years while we were on the road. I’m quite excited to have that coming out next month.

It started off as a picture book but it’s ended up as something close to a biography. It’s a set of snapshots of us standing offstage, and public and private moments. And none of this stuff has ever been seen before. People will be able to see it on the tour. I think it’ll be too heavy to actually take out there, but they’ll be able to see it when we play in the local arena.

“We’ve stayed with the biopic for the last 12 years to shepherd it to the right place where we feel it would do Freddie justice.”

When did you start taking those stereoscopic photos?
I started taking stereoscopic photos when I was 12 years old because I figured out how it was done. I was collecting little stereo cards from cereal packages. There photo cards looked very flat, but when you put it in the viewer, suddenly you could walk through this window into a virtual-reality world. And I was captivated. I thought from that point on, I don’t want to take flat pictures: I want to take stereoscopic, 3-D pictures. So it’s been a kind of obsession all my life. All through those Queen tours, I always carried a stereo camera. Looking at these, you really feel like you’re there. You feel like you could touch Freddie and you’re at those places.

You also have a Monopoly game.
Yeah, we put a lot of input into that. I did a lot of work on it to make it authentic. It sounds kind of trivial, Monopoly, but Monopoly is something which everyone will love to play and it’s usually about business, but this is something a little bit more about creativity, which I think is a lot of fun.

Did you get to rename Park Place and what not?
Oh, yeah. In the original game it’s Boardwalk and Park Place that are the most expensive places. And on this one, it’s Knebworth Park and Wembley Stadium. Madison Square Garden’s in there and Imperial College, where we first played, the Budokan in Tokyo and everything along the line. I can’t wait to play it myself. Even the tokens are very Queen. We have a guitar; we have a hula from the “I Want To Break Free” video; we have a fat-bottomed girl on the bike. I think people are gonna get a kick out of it.

Was there anything else you wanted to talk about?
[Sighs] We could talk about world peace.

OK, how can we achieve that?
[Laughs] Well, personally, I think that power, globally, tends to get in the hands of the wrong people. It’s almost by definition the people who want to be positions of power are the people shouldn’t be there. And I think that’s something that needs to be fixed around the world.

It’s not looking good at the moment, to my eyes. But I work a lot at government lobbying levels on behalf of animals, so I see it quite closely. And I see what goes on. I see how much self-interest there is in politics and how much is ruled by money and power. And it’s sad, really. I think somehow we need some kind of intellectual revolution to put things straight. I wish I had the answers, but I’m working on it.