Black Pumas’ journey to the Grammys began with a potentially awkward phone call. In late 2017, long-standing Austin-based guitarist and producer Adrian Quesada needed a singer for some new instrumentals he’d been recording. On the recommendation of a mutual friend, he left a message for a local talent, Eric Burton, who had virtually no track record in the business.

Burton hadn’t heard of Quesada, either, and he didn’t bother to call back — until some friends clued him in to Quesada’s high-end reputation. “They said, ‘Dude, hit that guy back up,’” recalls Burton. “They kind of scoffed at me for leaving him hanging for so long.” Finally, Burton dialed the number — “I felt, ‘Hey, this could be an opportunity to make some money’” — and Quesada, who was driving at the time, answered. “He sang over the phone, and I couldn’t hear him that well,” Quesada says. “But his passion and energy were so contagious.”

This unlikely pairing of two men 13 years apart in age, and coming from very different musical backgrounds, paid off: At this year’s Grammy Awards, Black Pumas will be competing in the Best New Artist category against the formidable likes of Lizzo, Billie Eilish, Lil Nas X, Yola, Maggie Rogers, and Rosalia, all of whom have sold more records than Black Pumas have. “I don’t even know how we made it onto [the list],” says Burton. “We feel like this is a battle against a bunch of Goliaths. It really is kind of mind-boggling.”

Then again, surprise twists are part of the group’s DNA. Growing up in Laredo, Texas, Quesada ignored his parents’ music in favor of hip-hop and hair-metal. He moved to Austin to study art in college, playing guitar in a punk-jazz act, the Blue Noise Band, before circling back to Mexican dance music from the Fifties and Sixties. Eventually, he and his group joined forces with another, more funk-oriented local band, the Blimp, to form Grupo Fantasma.

Quesada would log nearly 15 years with that limber, multi-faceted group, who played a cool, jacked-up version of traditional music. Their reputation growing, Grupo Fantasma were recruited by Prince for a series of dates at his Glam Slam club; Prince also jammed with them at a few VIP gigs in 2007. And in 2011, after losing out on an earlier Grammy, Grupo walked away with an award for Best Latin Rock, Alternative or Urban Album for 2010’s El Existential.

Even when he was in the band, Quesada was restless; early on, he started a harder, more metallic side project, Brownout, which released a bunch of Black Sabbath covers under the name Brown Sabbath. In the years after Grupo Fantasma’s Grammy win, Quesada reached a point where he felt he had to leave his musical mothership for good, in part due to the group’s rigorous road work. “I was starting to have a hard time committing to that schedule,” he says. “More than that, it was just a very specific palette. It was difficult [to leave], honestly, because it had turned into a family. But I never felt like the primary songwriter or anything, and if I was going to invest that much time in anything, I want to be more directly involved. It was time.”

For another side project, Quesada joined up with My Morning Jacket drummer Patrick Hallahan in the one-off band Spanish Gold in 2014. But he remained in search of an indefinable sound to call his own, and had begun working on his own instrumentals with local musicians when Burton entered the picture.

Burton’s story had started across the country, in Los Angeles. Living in a religious household with his mother in the San Fernando Valley, he heard more gospel than pop music. “I grew up kind of sheltered through the church,” he says. “As far as secular music, I just heard what was on the radio while we were doing chores.” The rare non-gospel record he remembers from that time is Pras’ 1998 hit “Ghetto Supastar”; his first CD purchase was 50 Cent’s Get Rich or Die Tryin’. (Though not a huge hip-hop fan, he loved 50’s catchy tunes.)

As part of his high school’s theater-geek crowd, Burton envisioned himself an actor, and thanks to an industry connection, he landed a bit part in the music-themed Keira Knightley/Mark Ruffalo movie Begin Again in 2013. Through that, he met former New Radicals frontman Gregg Alexander, who encouraged Burton’s music side. After a brief trip to college in Arizona, Burton wound up back in L.A, selling T-shirts while busking on the Santa Monica Pier. He and two musician friends played up and down the West Coast before driving to Austin, where Burton decided to stay.

When he first heard Burton’s name suggested as a possible collaborator, Quesada was perplexed. “I looked him up, and the first thing I thought was, ‘How have I not heard of this guy?’” says Quesada, who watched YouTube videos of Burton singing in clubs. “I pride myself on knowing. But I thought it was awesome. I love that I had no preconceived notions of this guy.” 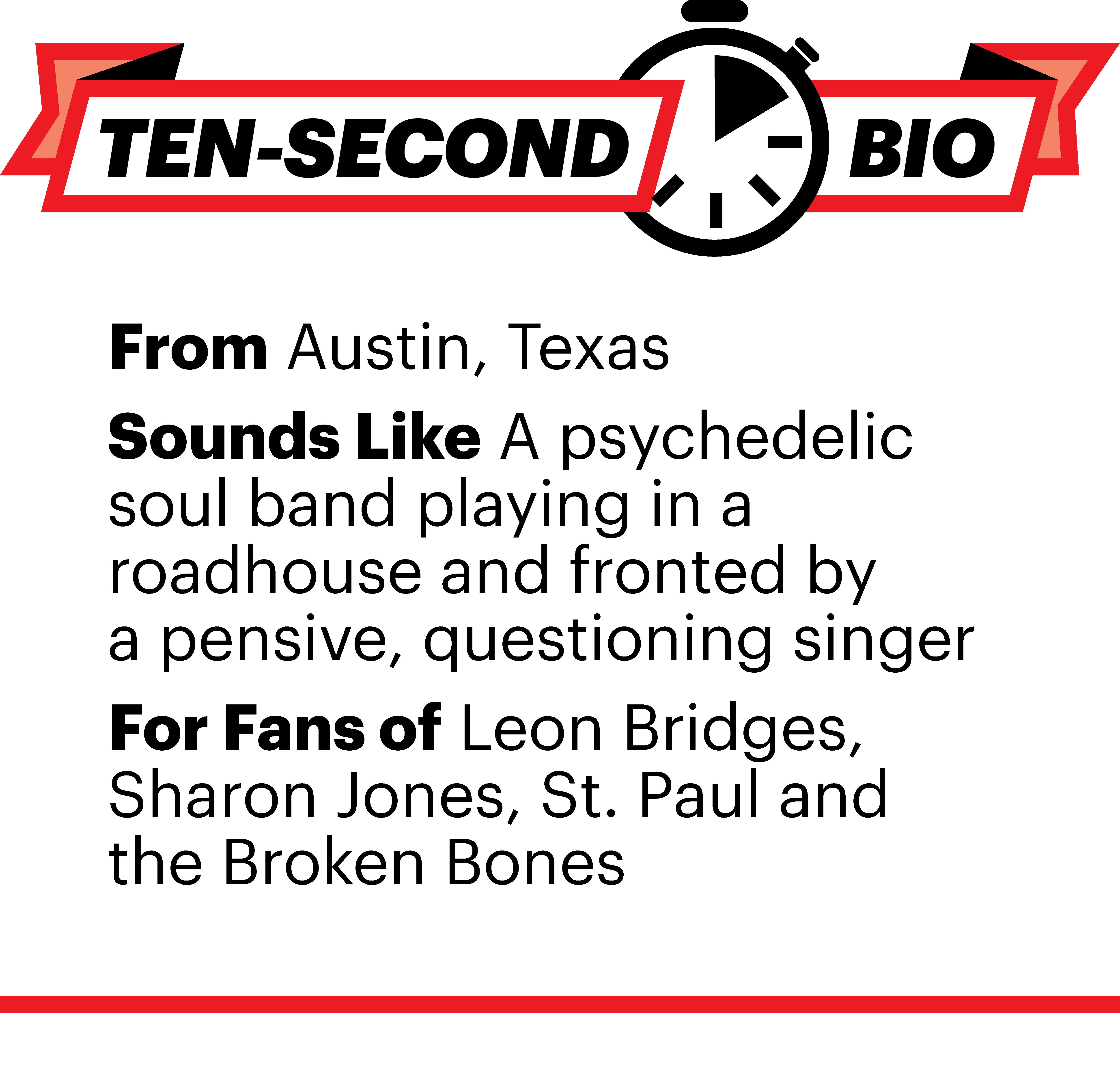 When the two finally met at Quesada’s Austin studio, it became immediately clear that they could complement each other. Burton’s smooth but gritty voice and original songs, like his rainbow-themed “Colors” (“My sisters and my brothers/See ’em like no other”), fit alongside the tracks Quesada had already cut, which were heavy on old-school electric pianos, live drums, and Quesada’s rumbly surf guitar. Quesada enhanced the classic-soul mood by introducing his younger collaborator to vintage R&B. “It made me want to go back and listen and figure out how to project the way Otis Redding and Marvin Gaye could,” Burton says. “Adrian really appreciated the tonality of my voice and the way I was reaching to embody these older artists that fit the canvas he was giving to me.”

Quesada agrees, but begs off the old-school comparisons. “We didn’t really set out to be a soul revival band or anything like that,” he says. “I wanted the soul to be that it came from our souls, not so much a carbon copy of any particular era or artists.”

“I didn’t even know that he had James Brown-level frontman chops. As soon as we stepped off the stage, we pulled each other aside and said, ‘There’s a spark here.’”

Soon enough, the duo had a name, Black Pumas, inspired by Quesada’s fascination with jaguars (his studio has a jaguar logo) and a play on the Black Panthers. The moment of creative truth came on stage, when they debuted their act at an Austin club. “I remember telling my wife not to come — give us a few weeks, because it might suck the first couple of times,” Quesada recalls. Quesada assumed Burton would be seated with his guitar, but to his — and Burton’s — surprise, the singer opted to stand up and perform, drawing on his theatrical background.  “When I got to put the guitar down, I found it was very freeing,” says Burton. “It elevated what we were doing.”

“Everything I had ever seen, Eric was playing troubadour, singer-songwriter style with a guitar,” says Quesada. “I didn’t even know that he had James Brown-level frontman chops. As soon as we stepped off the stage the first time, we pulled each other aside and said, ‘There’s a spark here.’”

From there, buzz began building. Black Pumas released “Black Moon Rising” on Spotify, scored a single deal and then a full-album contract with ATO Records (the label co-founded by Dave Matthews and currently home to My Morning Jacket, Brittany Howard, and King Gizzard and the Lizard Wizard). About a year ago, they scored a Best New Band award at the Austin Music Awards and released their debut, Black Pumas, a few months later.

Next came the band’s left-field Grammy nomination, which remains a mystery, even to those who work with the band. “I have no idea how that happened,” says ATO head Jon Salter, who submitted the band’s record for consideration but heard nothing more until the nomination was announced. “Maybe they wanted some guitar rock in there.” Sales certainly weren’t a factor: To date, Black Pumas has only sold around 23,000 combined physical and digital copies, according to Alpha Data.

But Quesada’s Grammy history didn’t hurt, and it’s also likely the group benefited from the Recording Academy’s secretive blue-ribbon panel, which whittles down dozens of nominees in the four leading categories to ensure those categories retain a patina of cool. “When the nominations came out and I saw Black Pumas, I said, ‘What the fuck? This makes no sense,'” says a label executive who participates in the Grammy process. “I pride myself in knowing every record that comes out and listening to everything. But then I thought about it and I thought, ‘That’s kind of cool.’ They and Yola are really good acts.” (The Recording Academy declined to comment on the process.)

The Puma’s next stop will be Los Angeles for the awards show. Quesada already has one Grammy appearance under his belt, for Grupo Fantasma’s first nomination. But for Burton, whose last day job was delivering packages for Amazon for $150 a day, the trip and the A-list competition are a reminder that he’s now in much bigger leagues than he even imagined. “I still can’t believe we’re part of the conversation, because we haven’t been a band very long,” says Burton. “I’ve had to be more professional, or else I’m going to get fired.”