“At the very least,” Steve Gorman writes in his new tell-all about the Black Crowes, “I can tell you what happened from my point of view.” As the band’s drummer since its nascent days as Mr. Crowe’s Garden up until the Black Crowes’ implosion in 2014, Gorman has seen his share of rock & roll drama from behind the kit. In Hard to Handle: The Life and Death of the Black Crowes — A Memoir, written with Steven Hyden, he distills his 27 years with the group into a satisfying and unexpectedly emotional read.

From onstage fights between the famously quarreling Robinson brothers, singer Chris and guitarist Rich, to backstage run-ins with Aerosmith on the Crowes’ first major tour, Gorman paints a picture of a band that just couldn’t get out of its own way. More often than not, fractures involved money and control, along with a large helping of ego — which Gorman says scuttled the band’s tour with Jimmy Page, sending the Led Zeppelin guitarist hurrying back to London.

Here are seven of the wildest tales in Gorman’s account of one of rock’s most dysfunctional bands.

1. After the band signed with Rick Rubin’s Def American label, the producer asked them to change their name to Kobb Kounty Krows — K.K.K.
Rubin didn’t like the group’s original name of Mr. Crowe’s Garden, and he suggested a moniker that both nodded to the Robinson brothers’ home state of Georgia and was provocative. Attention-grabbing or not, the allusion to the Klan didn’t sit well with the band. “How about we kick your ass right here in this bar tonight? That’ll get some attention,” Gorman recalls Chris Robinson threatening Rubin. In the end, the band changed its name, fortunately to the Black Crowes.

2. Gorman once tried to kick Liam Gallagher’s ass for slagging the Crowes onstage at Glastonbury.
When Oasis played Glastonbury in 1995, Gorman was watching side stage after the Black Crowes’ set when he heard — or thought he heard — Liam Gallagher say to the crowd, “It’s nice to get that silly Southern shit out of the way so you can hear some real music.” Incensed, and admittedly drunk, Gorman forced his way into Oasis’ backstage trailer with a bottle of Jack Daniel’s and waited for Gallagher to come offstage. “This fucking kid is about to learn more than he ever wanted to about silly Southern shit,” Gorman writes. Cooler heads in the Crowes camp prevailed and persuaded the drummer to leave, but Gorman asked Liam about the insult six years later when the Crowes toured with Oasis. “What? No!” Gallagher said. “I thought it was a proper fucking rock band.”

3. Not interested in partying with his bandmates after a triumphant gig in New Orleans, Rich Robinson broke Gorman’s cardinal rule of touring: He drove home in the bus without the rest of the band.
According to the drummer, he, Chris, and the rest of the Crowes wanted to see Peter Holsapple play a solo set across town after their own gig ended. Rich wanted to head immediately back to Atlanta. Reaching a compromise, they planned to meet Rich at the bus at 2 a.m. to head home. But when they arrived, both Rich and the band bus were gone. “Even Chris, on his worst fucking day, would never take the bus,” Gorman writes. “That’s never happened in the history of bands. It’s unforgivable.” Rich never apologized, says Gorman. Instead, the guitarist asked the band to get him his own bus.

4. Gorman was witness to some epic fights between the Robinson brothers, including one in San Antonio where he feared they’d actually kill each other.
The incident started when Chris tried to get his brother to play more cover songs in the Crowes’ set. At first, they just hurled insults  — “Go ahead, walk away, you fat piece of shit,” Chris taunted Rich, who replied, “Go do some more drugs, you fucking poser, you fucking alcoholic!” Then it got physical, with Chris throwing beer cans and the pair wrestling their way into a dressing room mirror surrounded by light bulbs. Busted glass was soon everywhere. Gorman thought someone was going to die: “Let’s end it now before someone cuts open a vein and bleeds out.”

5. The Black Crowes were excited to be the house band at Howard Stern’s 60th birthday party in New York — until Chris Robinson asked, “How much?”
The shock jock was an early supporter of the Black Crowes, so Stern’s team thought they’d be the perfect choice to play his all-star birthday tribute at New York’s Hammerstein Ballroom in 2014. The plan was to do it for free to repay Stern for his fandom, but Chris wasn’t having it. “Fuck Howard Stern. I don’t owe that motherfucker anything,” he said, according to Gorman, who claims the singer wanted $150,000 personally to do the gig. He didn’t get it, and he forbade his bandmates from playing it without him. “The real Chris Robinson is the angriest person I’ve ever known,” writes Gorman. 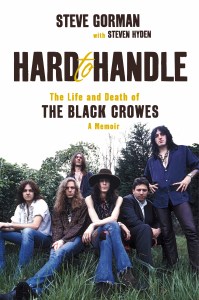 6. Rich Robinson’s snub of Jimmy Page derailed the Black Crowes’ 55-date tour with the Led Zeppelin guitarist after just 11 shows.
The pairing of Page with the Crowes gave the dysfunctional band a shot in the arm in 2000 and set them up for a successful year of touring. But following an appearance on The Tonight Show, Page, who was battling back problems, mysteriously disappeared, and the tour was canceled. Gorman learned the real reason why Page left from the man himself a year and a half later. According to the drummer’s recollection, Page told him that he offered to write songs with the Robinson brothers for their next record, but Rich blew him off with a “No thanks! … We don’t need more songs.” “I was insulted,” Page said to Gorman, who furiously called the Crowes’ manager and told him, “I’m driving to Connecticut, and I’m going to kill Rich in his home.”

7. Gorman dreamed of quitting the band for years, until one incident finally forced his hand. Not surprisingly, it involved money.
On the eve of a new tour celebrating the anniversary of the band’s debut album, Chris Robinson demanded a larger percentage of the Crowes’ pie. Specifically, he wanted all of Gorman’s share. “Chris wanted 75 percent of all the band’s income. That was quite an upgrade from the 33 1/3 percent share he had been receiving,” writes Gorman, who said no way to becoming a salaried member of the band he co-founded. “And that was the end of the Black Crowes.”