The Beatles‘ Sgt. Pepper’s Lonely Hearts Club Band, which Rolling Stone named as the best album of all time, turns 50 on June 1st. In honor of the anniversary, and coinciding with a new deluxe reissue of Sgt. Pepper, we present a series of in-depth pieces – one for each of the album’s tracks, excluding the brief “Sgt. Pepper’s Lonely Hearts Club Band” reprise on Side Two – that explore the background of this revolutionary and beloved record. Today’s installment looks back at the rock summit meetings that took place during the recording of “Lovely Rita.”

By early 1967, Abbey Road was one of the few remaining places on the planet where the Beatles could be guaranteed a modicum of privacy. As such, the studios had taken on an almost sacred significance, and outsiders were viewed with suspicion. It was an unspoken rule that wives and girlfriends were not welcome except on very special occasions, and even manager Brian Epstein entered at his own peril. Once during a studio visit, he dared to suggest that the singing sounded slightly flat. “You look after your percentages, Brian. We’ll look after the music,” John Lennon shot back. Epstein made himself scarce after that.

The 36-by-21 foot Studio 2 had become the center of the band’s world, populated by loyal confidants Neil Aspinall and Mal Evans, producer George Martin, engineer Geoff Emerick, a handful of technicians and occasionally journalist Hunter Davies, who was then working on the Beatles’ biography. Other than that, only old friends and rock elites were granted rare access into this inner sanctum. While recording the orchestral climax for “A Day in the Life” on February 10th, the Beatles threw a small “happening” in the cavernous Studio 1 next door, inviting Mick Jagger, Keith Richards, Donovan, Marianne Faithfull and Michael Nesmith of the Monkees. A few weeks later they would receive several other notable guests as they worked on the track “Lovely Rita.”

The song had taken shape in Paul McCartney’s imagination during a trip to see his father and brother in Liverpool earlier that year. “I remember one night just going for a walk and working on the words as I walked,” he told biographer Barry Miles in the book Many Years from Now. “This was about the time that parking meters were coming in; before that we’d been able to park freely, so people had quite an antagonistic feeling towards these people.” Having been fined a number of times himself, his first inclination was to take lyrical revenge by writing an anti-authority satire. “I was thinking vaguely that it should be a hate song: ‘You took my car away and I’m so blue today,’ and you wouldn’t be liking her,” he explained in an interview with illustrator Alan Aldridge. “But then I thought it would be better to love her.”

Musing on the subject, he recalled reading that female traffic officers had a nickname in the United States: meter maids. “I thought, God, that’s so American! Also, to me, ‘maid’ had sexual connotations, like a French maid or a milkmaid. There’s something good about ‘maid.’ And ‘meter’ made it a bit more official, like the meter in a cab; the meter is running, meter maid. Hearing that amused me. … ‘Rita’ was the only name I could think of that would rhyme with it so I started on that, ‘Rita,’ ‘meter maid,’ ‘Lovely Rita.’ And I just fantasized on the idea.”

Decades later, a woman named Meta Davis came forward claiming to be the meter maid in question. In the Sixties she had served as the first female traffic warden in the London neighborhood of St. John’s Wood, where McCartney lived. Even stranger, Davis says she once fined the Beatle. “It was in the spring of 1967 that I ticketed Paul’s car,” Rita told author Steven Turner in his book, A Hard Day’s Write. “He was on a meter showing excess, so I gave him a ten-shilling ticket. … I’d just put it on the windscreen when Paul came along and took it off. He looked at it and read my signature, which was in full, because there was another M. Davies on the same unit. As he was walking away, he turned to me and said, ‘Oh, is your name really Meta?’ I told him that it was. We chatted for a few minutes and he said, ‘That would be a good name for a song. Would you mind if I use it?’ And that was that. Off he went. … Then, a few months later, I heard ‘Lovely Rita’ on the radio.” 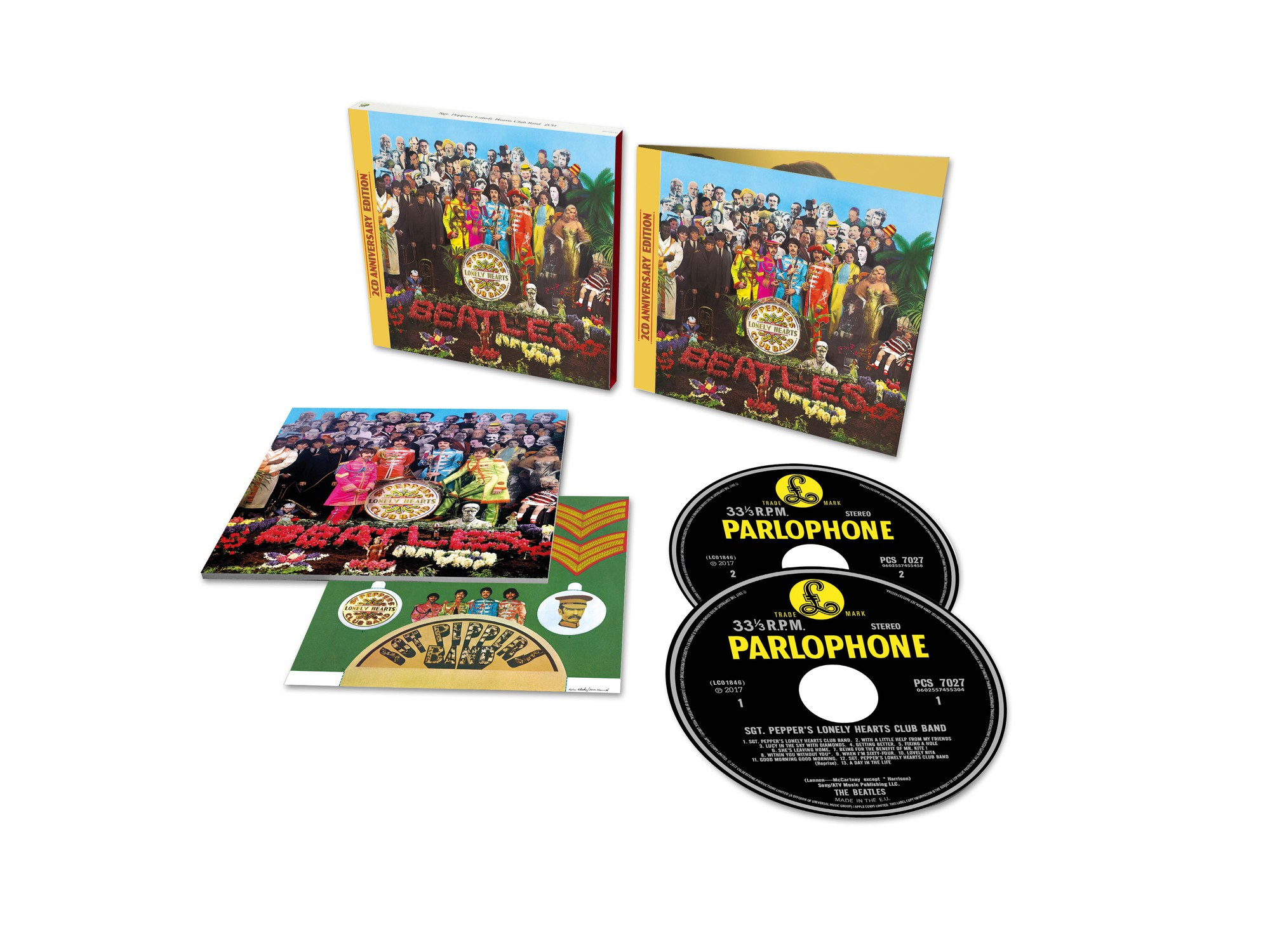 McCartney himself denies that the interaction consciously inspired the song. “It wasn’t based on a real person,” he told Miles. “I think it was more a question of coincidence. … I didn’t think, ‘Wow, that woman gave me a ticket, I’ll write a song about her.’ Never happened like that.”

After recording the instrumental backing track, the band reconvened the following day to tackle the vocals. As they worked, a pair of pop stars dropped by to join them: Tony Hicks of the Hollies and David Crosby of the Byrds. The Beatles had grown particularly close to Crosby during an extended stay in Los Angeles as part of their 1965 U.S. tour, even dropping acid with him and fellow Byrd Jim McGuinn. The groups would continue to a share a great affinity for one another – particularly George Harrison and McGuinn, who emboldened one another to incorporate Indian modes into Western pop with their jangling Rickenbacker 12-strings.

All of the Beatles valued Crosby’s opinion, so when he stopped by Abbey Road they were eager to play him some of their latest work. “I was, as near as I know, the first human being besides them and George Martin and the engineers to hear ‘A Day in the Life,'” Crosby recalled in an interview with Filter. “I was high as a kite – so high I was hunting geese with a rake. They sat me down; they had huge speakers, like coffins with wheels, that they rolled up on either side of the stool. By the time it got to the end of that piano chord, man, my brains were on the floor.”

Also on hand that night was Leslie Bryce, the staff photographer from The Beatles Book Monthly magazine, who took several photos of Lennon, McCartney, Harrison and Crosby gathered around a microphone. The accompanying article insinuates that Crosby added backup vocals on “Lovely Rita,” but his contribution, if it ever existed (Crosby never says it did), was not used. However, Bryce’s camera failed to capture singer Shawn Phillips, who claims that he too was in attendance with Crosby and Hicks. The American folk-rocker was a musical collaborator and close companion to Donovan, a friend of the Beatles. “We’d known each other a year by that point, and Paul invited us to Abbey Road, and we went there,” Phillips told Goldmine in 2012. “We went to the studio, and at some point Paul says, ‘We need backup vocals on this. This is what I want you to sing.’ So David Crosby and I went in there and we sang backup vocals on ‘Lovely Rita.'” Aside from his own assertions, Phillips’ presence remains unverified.

The Beatles would revisit “Lovely Rita” on March 7th, when they tackled a series of unconventional overdubs. In his 2006 memoir, Geoff Emerick recalls the band “standing around a single microphone humming through a comb and paper, each priceless Beatle comb carefully wrapped with a single layer of the standard issue extra-scratchy EMI toilet paper that we were all constantly complaining about.” To achieve a kazoo effect, Mal Evans had been dispatched to the studio bathrooms to collect several rolls, each piece stamped with the words “Property of EMI” to deter theft. The TP was, according to Harrison, “like lino [linoleum],” and their grievances ultimately changed EMI’s toilet-paper policy. (A roll of the offending stuff was later sold in 2011 for 1,000 pounds a sheet.)

The song was completed on March 21st, after the group recorded backing vocals for “Getting Better.” This same night Lennon accidentally dosed himself with LSD, so his involvement in the session was minimal as the remaining band members struggled to conceive of a way to fill the solo gap in “Lovely Rita.” Emerick ultimately had the winning idea. “My suggestion was that they try something on piano. To my surprise, Paul asked, ‘Why don’t you play it?’ In a kneejerk reaction – and to my everlasting regret – I demurred; I was simply too embarrassed to demonstrate my musical skills. Paul shrugged his shoulders and took a stab at it, but he still wasn’t a hundred percent certain that it was a good idea, so he had George Martin play something instead.” Martin employed a trick he had used on the Rubber Soul track “In My Life,” recording a piano part at a slow tape speed. When it was played at the appropriate speed the effect resembled a wild honky-tonk riff.

“They were God-like figures to us.” –Nick Mason

Throughout the night the Beatles received several visitors, including their music publisher Dick James, management deputy Peter Brown, and Ivan Vaughan, who had introduced John Lennon and Paul McCartney for the first time back in 1957. But perhaps most notable was Norman Smith, who had worked as the Beatles’ engineer until the previous year. He had since moved on to a production role, and was working in nearby Studio 3 recording the debut album for a brand new group: Pink Floyd.

“Very politely, [Smith] asked George Martin if his boys could possibly pop in to see the Beatles at work,” Davies wrote in the Beatles’ biography. “George smiled, unhelpfully. Norman said perhaps he should ask John personally, as a favor. George Martin said no, that wouldn’t work. But if by chance he and his boys popped in about eleven o’clock, he might just be able to see what he could do.”

That’s exactly what Smith did. Though Pink Floyd had become the official house band of the London Underground scene with appearances at the ultra-hip UFO Club, they were still overawed being in the presence of the Beatles. “They were God-like figures to us,” drummer Nick Mason recalled in a 2011 interview with The Wall Street Journal. “They all seemed extremely nice, but they were in a strata so far beyond us that they were out of our league.” He elaborated on the meeting in his 2004 memoir, Inside Out: A Personal History of Pink Floyd. “We were ushered into Studio 2 where the Fab Four were busy recording ‘Lovely Rita.’ The music sounded wonderful, and incredibly professional. … There was little if any banter with the Beatles. We sat humbly and humbled, at the back of the control room while they worked on the mix, and after a suitable (and embarrassing) period of time had elapsed, we were ushered out again.”

Roger Waters’ memory of the momentary rock summit is somewhat less warm. “I only met John Lennon once, to my huge regret, and that was in the control room at Number 2,” he said in an interview with Marc Maron. “He was a bit acerbic. He was quite snotty – so was I!”