Inside Beatles' 'With a Little Help From My Friends' - Rolling Stone
×
×

The Beatles‘ Sgt. Pepper’s Lonely Hearts Club Band, which Rolling Stone named as the best album of all time, turns 50 on June 1st. In honor of the anniversary, and coinciding with a new deluxe reissue of Sgt. Pepper, we present a series of in-depth pieces – one for each of the album’s tracks, excluding the brief “Sgt. Pepper’s Lonely Hearts Club Band” reprise on Side Two – that explore the background of this revolutionary and beloved record. Today’s installment focuses on how the band coached reluctant singer Ringo Starr through the recording of “With a Little Help From My Friends.”

Forget the haircuts; one of the Beatles’ most distinctive characteristics when they first appeared before the record-buying public in 1962 was their lack of a frontman. While John Lennon and Paul McCartney shouldered the majority of the writing – and, therefore, singing – duties in the early years, the band’s first LP set the democratic precedent of offering each member his own featured vocal spot. It was a tradition they would uphold on all but three of their future albums. George Harrison began regularly singing his own compositions by 1965, but when the Beatles were in the midst of recording Sgt. Pepper’s Lonely Hearts Club Band, Ringo Starr needed a little help from his friends for his vocal cameo.

“I always saw those [songs] as the equivalent of writing a James Bond film theme,” McCartney explained in Barry Miles’ biography, Many Years From Now. “It was a challenge. It was something out of the ordinary for us because we actually had to write in a key for Ringo and you had to be a little tongue in cheek.” Like school kids, the songwriting partners procrastinated on the assignment until the last possible moment. Starr’s track would be the last one composed for the album. 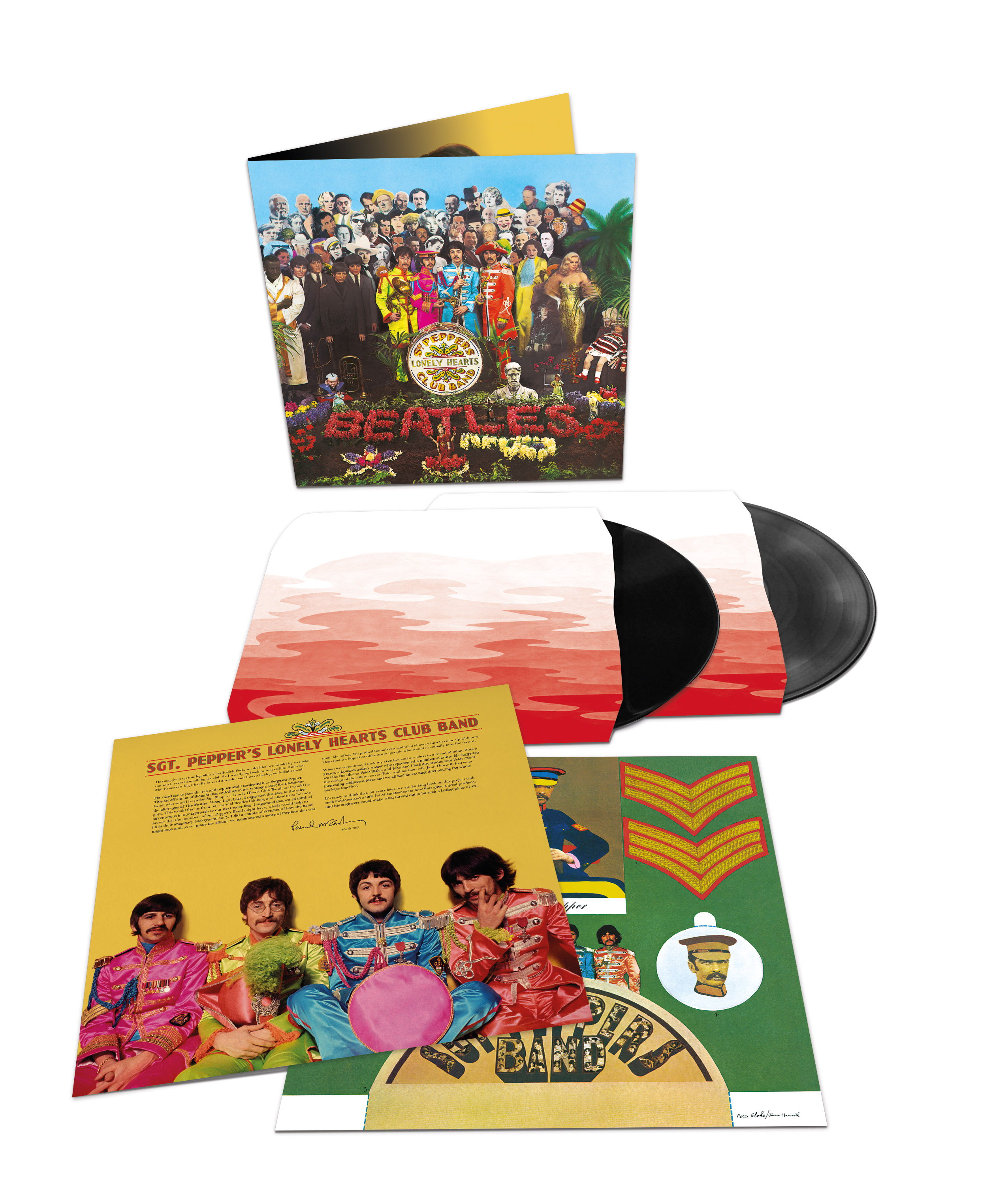 McCartney traveled out to Kenwood, Lennon’s estate in the London suburb of Weybridge, on March 28th, 1967, to sketch out a melody. It was provisionally known as “Bad Finger Boogie,” apparently because Lennon had injured one of his digits. The following day the pair reconvened at McCartney’s North London home, just around the corner from EMI’s Abbey Road studios, to flesh out the verses. Writer Hunter Davies, then working on the band’s official biography, joined them, becoming one of the first journalists granted an inside look at the Lennon-McCartney writing partnership. To his eyes, the song was surprisingly laid back.

“At 2 o’clock in the afternoon John arrived at Paul’s house in St. John’s Wood,” Davies wrote in his account. “They both went up to Paul’s workroom at the top of the house. It is a narrow, rectangular room, full of stereophonic equipment and amplifiers. … John started playing his guitar and Paul started banging on his piano. For a couple of hours they both banged away. Each seemed to be in a trance until the other came up with something good, then he would pluck it out of a mass of noises and try it himself.”

As Davies describes, the men worked line-by-line, feeling around for words that scanned. Despite further assistance from Lennon’s wife, Cynthia, and their friend Terry Doran, the song remained incomplete five hours later. “It was getting near 7 o’clock, almost time to go round the corner to the EMI recording studios. They decided to ring Ringo, to tell him his song was finished – which it wasn’t – and that they would do it that evening.”

Facing a deadline from EMI to finish the album (now in its unprecedented fourth month of production), the group trucked into Studio Two that night, March 29th, to begin work on what would become “With a Little Help from My Friends.” Engineer Geoff Emerick and his deputy, Richard Lush, were on hand with producer George Martin, and together they worked through the wee hours to capture a usable rhythm track; McCartney played piano, Harrison strummed electric guitar, Starr manned the drum kit, and Lennon bashed a cowbell. After 10 takes they had a “keeper,” a formidable accomplishment for a night’s work. “It was nearly dawn by that time,” Emerick recalls in his memoir, Here, There and Everywhere: My Life Recording the Music of the Beatles. “Richard and I watched an exhausted Ringo begin to trudge up the stairs. That was our signal, as usual, that the session was over, and we began to relax.”

But the remaining three Beatles had other plans. Starr was often overcome with nerves when it came time to record his vocals, so his companions decided to reveal their agenda with little warning in hopes of sparing him the anticipatory anguish. “He was at the halfway point [of the stairs] when we heard Paul’s voice call out. ‘Where are you going, Ring?'” Emerick writes. “Ringo looked surprised. ‘Home, to bed.’ ‘Nah, let’s do the vocal now.’ Ringo looked to the others for support. ‘But I’m knackered,’ he protested. To his dismay, both John and George Harrison were taking Paul’s side. ‘No, come on back here and do some singing for us,’ John said with a grin.” Reluctantly, Starr took his place behind the vocal microphone.

Lennon and McCartney hastily filled the gaps in the lyrics and presented Starr with a complete version. Though clearly pleased with the quality of the song, the drummer did have a significant edit. “They had one line that I wouldn’t sing,” he says in the Beatles Anthology documentary. “It was, ‘What would you do if I sang out of tune?/Would you stand up and throw tomatoes at me?’ I said, ‘There’s not a chance in hell am I going to sing this line.'” During the band’s touring days, fans pelted them with rock-hard jellybeans, toys, lighters and other gifts in a misguided display of affection. The ritual played a minor role in the Beatles’ decision to retire from live performance, but Starr wasn’t taking any chances. “I thought that if we ever did get out there again, I was not going to be bombarded with tomatoes!” The line was quickly adjusted to, “Would you stand up and walk out on me?”

“I’m insecure when I do the vocals.” –Ringo Starr

To the sleepy Beatles’ delight, it only took Starr a few takes to nail most of his part. “Perhaps the shock tactic of having him sing when he was least expecting it took the nervousness away, or perhaps it was just how supportive everyone was being,” writes Emerick. “All three of his compatriots gathered around him, inches behind the microphone, silently conducting and cheering him on as he gamely tackled his vocal duties. It was a touching show of unity among the four Beatles.”

The take was nearly in the can, except for the climactic high note. While the rest of the song was written with just five notes to accommodate Starr’s vocal range, the show-stopping finale takes a full octave leap. “It took a lot of coaxing from Paul to get me to sing that last note,” Starr admitted in a 1992 episode of The South Bank Show. “I just felt it was very high. I always worry about the vocals. I’m insecure when I do the vocals.”

Starr tried to persuade the others to let him sing the line at a slower tape speed, thus allowing the tone to be artificially raised by studio trickery, but the effect was less Beatlesque and more Chipmunk-esque. “‘No, Ring, you’ve got to do it properly,’ Paul finally concluded,” writes Emerick. “‘It’s okay; just put your mind to it. You can do it,’ George Harrison said encouragingly. Even John added some helpful – if decidedly nontechnical – advice: ‘Just throw yer head back and let’er rip!'” After several attempts, he successfully scaled the vocal heights. “Amid the cheers of his bandmates and a Scotch-and-Coke toast, the session finally ended.”