It’s one thing for an album to come along and press itself so deeply into the culture that little feels the same after its arrival, but what are the chances that that same album would have the most iconic LP artwork of all time?

So it goes with the Beatles‘ Sgt. Pepper’s Lonely Hearts Club Band and its wonderful swirl of visuals, ranging from that most distinguished assembly of personalities on its front cover courtesy of Pop artists Peter Blake and Jann Haworth, to some sleeve work by the Dutch design team the Fool, to Michael Cooper’s photographs, to the grab-bag of cut-out treasures that accompanied the album. Art dealer Robert Fraser helmed the proceedings as art director, with the most legendary cover-art shoot in rock history transpiring 50th years ago on March 30th. The cover was lavishly pricey to produce, but it solidified the Beatles’ mythic status for all time.

Here are 10 things you might not know about the iconic look of Sgt. Pepper.

1. Paul McCartney spearheaded the cover concept. …
This was a period when McCartney was asserting himself more and more when it came to the Beatles’ career decisions, a trend that would continue for the remainder of their time together. He produced ink drawings of the cover concept and shared them with Blake and his wife Haworth. “I did a lot of drawings of us being presented to the Lord Mayor,”
Paul explained in Barry Miles’ Many Years From Now, “with lots of dignitaries and lots of friends of ours
around, and it was to be us in front of a big northern floral clock, and
we were to look like a brass band. That developed to become the Peter Blake cover.” 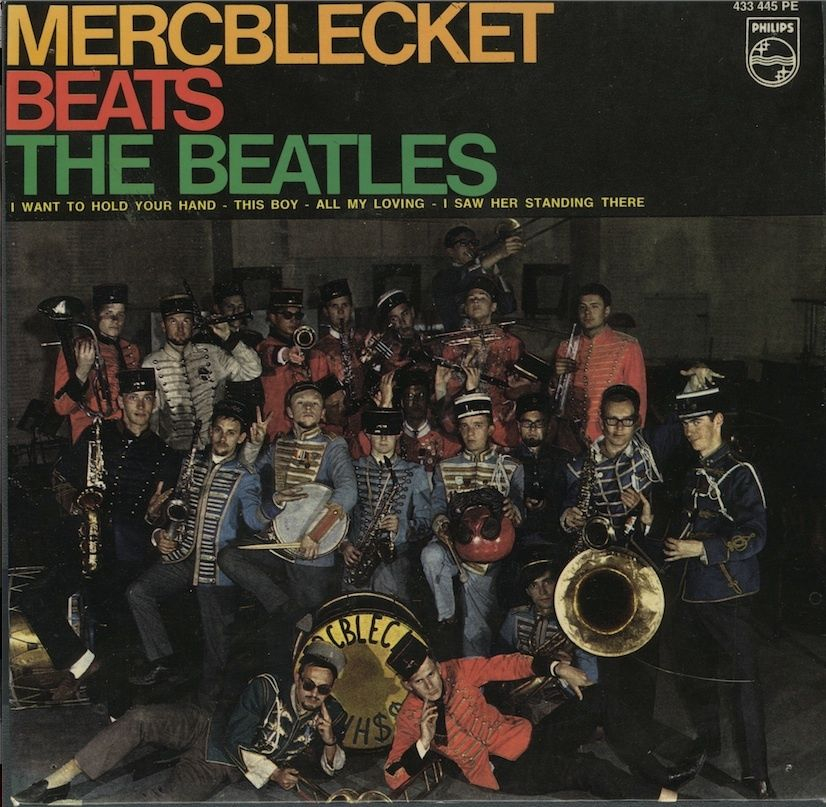 2. But he may have drawn inspiration from an obscure Swedish band.
A Beatles tribute/parody EP, released three years prior to Sgt. Pepper by the Swedish brass band Mercblecket, featured artwork that was strikingly similar to the final Pepper cover. McCartney hasn’t gone on record about the earlier image, but Mercblecket did entertain the Beatles upon their arrival in Stockholm in 1964, and according to Swedish record dealer Jorgen Johansson, group member Roger Wallis has claimed he gave McCartney a copy of the EP during the trip.

3. The cover was almost an abstract painting.
McCartney’s friend John Dunbar enthused that an abstract canvas, without any text, would work best in those heady times: “People will know what it is, man, people will know what it is!” he remarked. The Beatles were also going to situate themselves in an Edwardian sitting room amidst some bric-a-brac of old trophies and photographs. The appeal of Blake was that his art was envelope-pushing in a more modern sense, but with elements of the past, and the Beatles wanted Sgt. Pepper to appeal as much to teenagers as octogenarians. He was also a fan of Gene Vincent and Elvis, a “real deep common denominator” for McCartney.

4. John Lennon was the most problematic Beatle when it came to who he wanted on the cover.
Each Beatle had been tasked with coming up with a list of men and women throughout history that they wished to have join them at the grand imagistic fete seen on the album cover. All told, there are 57 photographs in the collage. Lennon wanting to be be “bold and brassy” in McCartney’s words, stumped for Hitler and Christ to appear, and also Gandhi. EMI boss Sir Joseph Lockwood vetoed Gandhi’s inclusion, worried that the album would not sell in India. Occultist/satanist Aleister Crowley did manage to make the grade, though.

5. There were a range of reactions from the celebrities the Beatles wanted to include.
Actress Mae West, upon learning of the Beatles’ request, said, “What would I be doing in a lonely hearts club band?” Shirley Temple wanted to hear the record before she would commit. Blake considered the collage “a theater design,” his mindset being that the fictional band had just played a concert in the park, and now were taking a photograph with their audience. Leo Gorcey, who starred in the Bowery Boys films, wanted $400 for his likeness, thus taking himself out of the mix.

6. Sgt. Pepper was the first record to feature printed lyrics in the packaging – which helped spark the “Paul is dead” rumors.
These featured on the back cover, which would also do its part to fuel the “Paul is dead” craze that would shortly spring up. On the album’s reverse, McCartney’s back is to the camera, and next to his head are the lyrics “without you” from George Harrison’s “Within You Without You.” “Clues” are alleged to be sprinkled throughout the record’s artwork: with the guitar floral arrangement on the front cover, for instance, and the O.P.D. badge that McCartney is wearing, which John Neary, in a Life article, called the British equivalent of “Dead on arrival.” In the same article, McCartney said, “It’s all so bloody stupid. I picked up the O.P.D. badge in Canada. It was a police badge.” Indeed – the letters stand for Ontario Provincial Police, with the second P being mistaken for a D.

7. Half the Beatles turned up high for their March 30th photo shoot.
The band was recording that night and arrived at Michael Cooper’s London photography studio in the late afternoon. Blake and Haworth’s collage had been assembled over the previous week. “If you look closely at the album cover, you’ll see two people who are flying, and two who aren’t,” John Lennon said, with Ringo Starr chipping in, “Have a look at the cover and come to your own conclusion! There’s a lot of red-eyed photos around!” Upping the trippiness was the gatefold design of the Fool, the Dutch collective Fraser wanted no part of, telling McCartney their contribution just wasn’t a good painting. The Fool did make the sleeve for the record itself, which replaced the standard white paper sleeve that featured on almost every other record release.

8. No album cover had ever cost nearly this much.
“We originally wanted to have an envelope stuck inside with gifts in, but it became too hard to produce,” McCartney remembered. “It was hard enough, anyway, and the record company were having to bite the bullet as it was costing a little bit more than their usual two pence cardboard cover.” Most album covers cost around 50 pounds to make; this Beatles/Blake/Haworth opus ran to more than 3,000 pounds. A lot of that had to do with paying people to use their likeness, which was rarely a factor for a rock LP cover.

9. The album came with its own cut-outs.
“There were little hand-outs, little badges,” McCartney said. These included paper mustaches, a postcard of a statue from Lennon’s house, and paper sergeant stripes. The thinking was that the record was to be an interactive experience between band and listener. The band’s hippie-esque choice of haircuts and facial hair was meant to blend with their military throwback attire to bridge past, present and future. “We wanted the whole of Pepper to be so that you could look at the front cover for years,” McCartney claimed.

10. Elvis was originally supposed to appear on the cover.
Somewhat conspicuous in his absence on a cover featuring Bob Dylan and a reference to the Rolling Stones was the Beatles’ collective hero, Elvis Aaron Presley. According to McCartney, “Elvis was too important and too far above the rest even to mention.” Hence, Elvis out, and Bobby Breen, a famous Canadian-born child singer of the 1930s in. Breen found his inclusion surprising. We do not know what Elvis thought about his omission.

The Beatles’ earlier incarnation, circa 1964, is represented in four wax figures courtesy of Madame Tussaud’s, which lent the pieces to the band. They would later virtually disappear in a Tussaud’s storeroom, going unseen for 20 years before being auctioned off by auction house Cooper Owen for 81,500 pounds in 2005. “You wouldn’t think anyone would be willing to pay this much for some wax,” Cooper Owen’s Louise Cooper quipped.