Aretha Franklin, who died on August 16th at age 76, recorded more than 40 full-length albums in her six-decade career. It’s a deep catalog, crowded with indisputable classics and hidden gems. Rolling Stone’s music staff is paying its R.E.S.P.E.C.T.s to the Queen with tributes to our favorite Aretha LPs. Next up: David Browne on Aretha’s glide into the synth-happy 1980s. 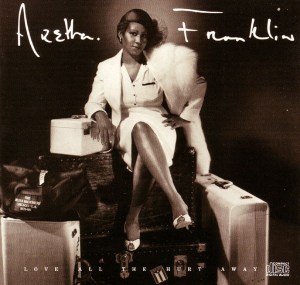 The early ’80s and the dawn of the MTV takeover weren’t always kind to singers and bands from the previous two decades, who struggled to sound synth-friendly and act convincingly in videos. Franklin was no exception. After ending her prosperous stretch with Atlantic and signing with Clive Davis’ Arista in 1980, she tried to regain her footing in a world of disco and upscale soul. Before finally hitting the commercial jackpot with 1985’s Who’s Zoomin’ Who, she made four largely spotty LPs for the label. Cherry-picking those albums would make for one terrific mixtape; start with the lithesome Luther Vandross productions “Jump to It,” “Love Me Right,” and “Get It Right,” which kept the disco flame lit into the ’80s and brought out the suppleness of her voice.

But the lost gem of that era may be 1981’s Love All the Hurt Away, which found her working again with producer Arif Mardin. As she often would, Aretha tapped into the zeitgeist sound of the moment – the suavely produced pop-soul of Michael Jackson’s Off the Wall and George Benson’s period hits like “Give Me the Night.” In fact, she duets with Benson on the gently syncopating, pure Quiet Storm title song, and Rod Temperton, who wrote “Rock with You” and “Off the Wall,” turns up here as the composer of the party-after-work anthem “Living in the Streets.” Members of Toto, who popped on many such albums back then, are here as well.

The FBI's Greatest Hits: Why These Pop Stars Were Tracked by the Bureau

Aretha’s electro overhaul of the Stones’ “You Can’t Always Get What You Want” continues her tradition of completely overtaking well-known songs and making them her own. In a twisted way, it’s a must-listen, but she’s better served by her overdue remake of Sam and Dave’s “Hold On, I’m Comin’,” which gives her voice room to roar and swoop. She and Mardin turn “Truth and Honesty” (written by Burt Bacharach, Carole Bayer Sager and Peter Allen) into jubilant, clipped-pace pop. Two of the best tracks come from Aretha’s own pen. “Whole Lot of Me,” a luscious seduction song, engulfs her in sumptuous, hopping orchestral soul and inexplicably wasn’t a hit. And as elsewhere on the album (“It’s My Turn”), Aretha’s self-composed “Kind of Man” demonstrates the way she could invest even the most mawkish material with emotional urgency. When she lets loose during its closing minutes, her voice rushing into full oratory mode, it’s a harbinger of rebirth to come.

Not a Big Happy Family: 'Barney' Doc Explores the Hatred and Threats the Show Faced