Alice Merton wrote “No Roots” to cope with moving a dizzying 12 times in her 24 years. And the song – a diary entry explaining how constant upheaval can both harden and enlighten – has spent the past year on a remarkable journey of its own. After its initial release in 2016, it began flourishing in Europe late last year. It has since reached Number One on the Alternative, Triple A and Rock Airplay charts in the U.S., and the video recently eclipsed 66 million YouTube views.

“The actual idea behind the song, for me, was very depressing,” says Merton, who now splits her time between Germany and England. “I was realizing that I didn’t have a home. I didn’t really feel at home in one place.”

Naturally, the song originally had chords she says were “quite melancholic,” but it ultimately evolved into an upbeat synth-pop track riding a bass groove recalling C+C Music Factory’s 1990 hit “Gonna Make You Sweat (Everybody Dance Now).” Her authoritative mid-range isn’t begging for sympathy, but it’s hard not to hear some raw feelings left in the line “I build a home and wait for someone to tear it down.”

Her father’s job as a mining consultant – as well as her parents’ overall wanderlust – led to Merton splitting time between Canada, the U.S., Germany and England. A nomadic existence forced her to scale back on material items. “My mom would come in with every move with two boxes and say, ‘The stuff that’s in this box we take, and the stuff that’s in this box we throw out.'”

Merton worked with producer Nicolas Rebscher to shape “No Roots” to its current funky form. 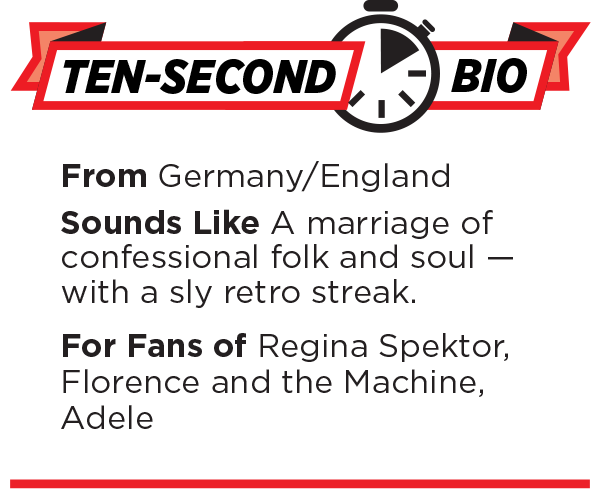 “I wanted the song to be very freeing and have this cool and fun rhythm,” she explains. “Solo, it’s very melancholic and emotional, but when I play it with my band it’s uplifting. It shows the two sides of having no roots.”

Neither version of “No Roots” quite aligns with prevailing indie-rock or pop trends, so labels initially didn’t know what to do with it. “We had lots of meetings,” she says. “Some of them said, ‘We think you’re going in an interesting direction, but we want you to write some more, we want you to produce some more. We don’t think this is quite what people are looking for, and we don’t think this is going to work.'”

She self-released the track on a label she dubbed Paper Plane Records, an homage to M.I.A.’s 2007 hit, and has since signed to Mom + Pop Music, home to Courtney Barnett. Her first release for the label, the No Roots EP includes another potential hit in “Hit the Ground Running,” a more optimistic meditation on the unknown road ahead.

In the “Running” video and in her live shows, Merton wears metallic pieces around her neck evoking something between Mad Max and an Erector Set. Each was custom designed by friend Suzann Bosslau and Merton calls them her armor.

“I get really nervous when I’m performing or meeting new people,” she says. “We tried it out on the clothing, and both agreed it looked cool. And for each performance I wear it. It’s a shield that protects me.”

She admits that living out of a suitcase for so many years actually made for an easy transition into touring, and she’s grateful for it.

“I still can’t believe people can relate to it,” she says. “When I wrote it, it was a very selfish reason. Me trying to understand how I feel. I think it was more a selfish kind of feeling. I think it’s just different from what a lot of people are listening to. Maybe that’s why people like it, because it’s different.”