Alice Cooper titled his latest album Paranormal because for him, the word is a way of life. “My whole career has been paranormal,” the shock rocker tells Rolling Stone. “So why stop there?”

The LP itself is relatively straightforward, though, at least by Cooper’s unapologetically maximalist standards. It contains 10 new songs, which play out like macabre vignettes about people suffering different degrees of mental illness – the paranoid, someone obsessed with rats, a witness to the apocalypse – all set to catchy melodies that run from hard rocking to the macabre and eerie. Additionally, it contains two new songs by the surviving members of the original Alice Cooper group and a clutch of classics recorded live with his current band. And since he’s an overachiever, Cooper has also enlisted producer Bob Ezrin – best known for the original Cooper LPs, Kiss’ Destroyer and Pink Floyd’s The Wall, among others – to helm the project, which features U2 drummer Larry Mullen Jr. playing on most songs and appearances by ZZ Top’s Billy Gibbons and Deep Purple bassist Roger Glover.

Cooper will be touring the U.S. later this summer with Deep Purple, but when he caught up with Rolling Stone a few weeks before Paranormal‘s release, he was already used to battling the heat onstage. “Tomorrow night, we have an outdoor show in Tucson where it’s gonna be 95,” he says. “So that should be fun. When you add the lights to the stage and the pyro and everything, it goes up to about 120 onstage. I’m thinking I have to rethink all the leather I wear.” He laughs.

That said, the 69-year-old singer is not worried about running out of momentum. “Since I don’t drink or smoke, every show’s an aerobic workout for me,” he says. “I come off the tour in better shape than when I went on the tour. I lose like two inches off my waist. It’s good for me to be on tour, physically.”

He says it’s this indefatigable determination that fuels his music.

Why did you decide not to do a concept album this time?
I just didn’t feel like it. I just said, “Let’s do something that’s different.” Actually, for us not to do a storyline was paranormal [laughs]. It was odd that we didn’t do a storyline. That’s just the way it worked out. I learned how to write a three-minute song and tell a story by listening to Chuck Berry. And at the end, what you thought was gonna happen doesn’t happen.

Did you ever meet Chuck?
Oh, yeah. He was so funny because he actually knew that he influenced all of us. He kind of acted like that, which was kind of cool – a little arrogant but fun.

Have you ever had an experience with the paranormal in the traditional sense of the word?
Yes. It was a very odd thing. Joe Perry and I were writing songs for this movie called Monster Dog [which came out in 1984] at an old house in Copake, New York. Every time I would put something down – I’d go in the other room, I’d come back – it was in some other place. It was more playful than scary. We were both just out of rehab so we figured we were just insane. But when the two road guys said, “Jeez, I know I put ’em there and they were on the other side of the room when I came back.”

That night at dinner, there’s a basement right under us and it sounds like somebody’s moving furniture down there. It’s not just a bump or a little thing: It sounds like 20 people are moving furniture. And it’s not like the movies where you go, “Let’s go see what that is.” It was more like, “Do you know where the car keys are?” We got out of there that night.

Then I asked my manager, Shep [Gordon], “What is it with your house up in Copake?” And he said, “Oh, the guy wrote Amityville Horror there.” He said, “My mom had a dinner party there one night where the dining table moved a foot to the left with everybody sitting there.” I went, “And you were gonna tell me this when?” So yeah, that was paranormal. I can’t explain any of that.

Paranormal is your 27th album. Do you ever question the need to make more music?
There’s no such thing as not making an album or not writing songs. You always think the next album is gonna be your best album. If that’s not your attitude, why do it? I’m sure Paul McCartney’s still thinking he hasn’t written his best songs yet. So you just keep making albums. Then, sometimes, you click into something that’s really good.

One of the songs on the album, “Fireball,” tells the story of a man who dreams about the end of the world and wakes up to see it’s really happening. How do you think the world will end?
I’m more of a glass-half-full guy. I’m the eternal optimist. I don’t really think it’s going to end in a Third or Fourth World War. I think in the end, the good guys will win. Spiritually, I think it’s one of those things where we’ve gotta come to a head at some point. I think there needs to be a moral core somewhere. I think in the end, our moral core will save us. All you ever hear about is five or six guys doing really horrible things, with millions of other people doing really good things.

It’s easier to write something negative than positive.
I was a journalism major, so I get it. I always told everybody that I didn’t want to be The New York Times; I wanted to be the Enquirer [laughs]. “Boy Born With Dog’s Head,” that’s me.

You had U2’s Larry Mullen Jr. guest on most of the album. How was it working with him?
He came in and said, “I need to see all the lyrics.” I said, “What do you mean?” He said, “I don’t play to the bass … I listen to the lyrics and I interpret the lyrics.” I went, “Well, that’s great. That’s a whole new way of looking at it.”

You also got the surviving member of the original Alice Cooper band together again for some of the songs on the album. How was it working with them?
We never broke up with any bad blood. There were no lawsuits. Nobody was angry with anybody. Everybody just went their own ways for a while. We stayed in touch. I kept going. I was driven to keep doing what I did, but we stayed friends.

Anytime there was a possibility of them coming up onstage and playing, I would ask them to. So when I called them before this album, Neal [Smith, drums] says, “I’ve got a couple songs.” Mike [Bruce, guitar] says, “I’ve got two or three.” Dennis [Dunaway, bass] says, “I’ve always got songs.” I told them that that means they have to play on it. So it’s a nice touch. 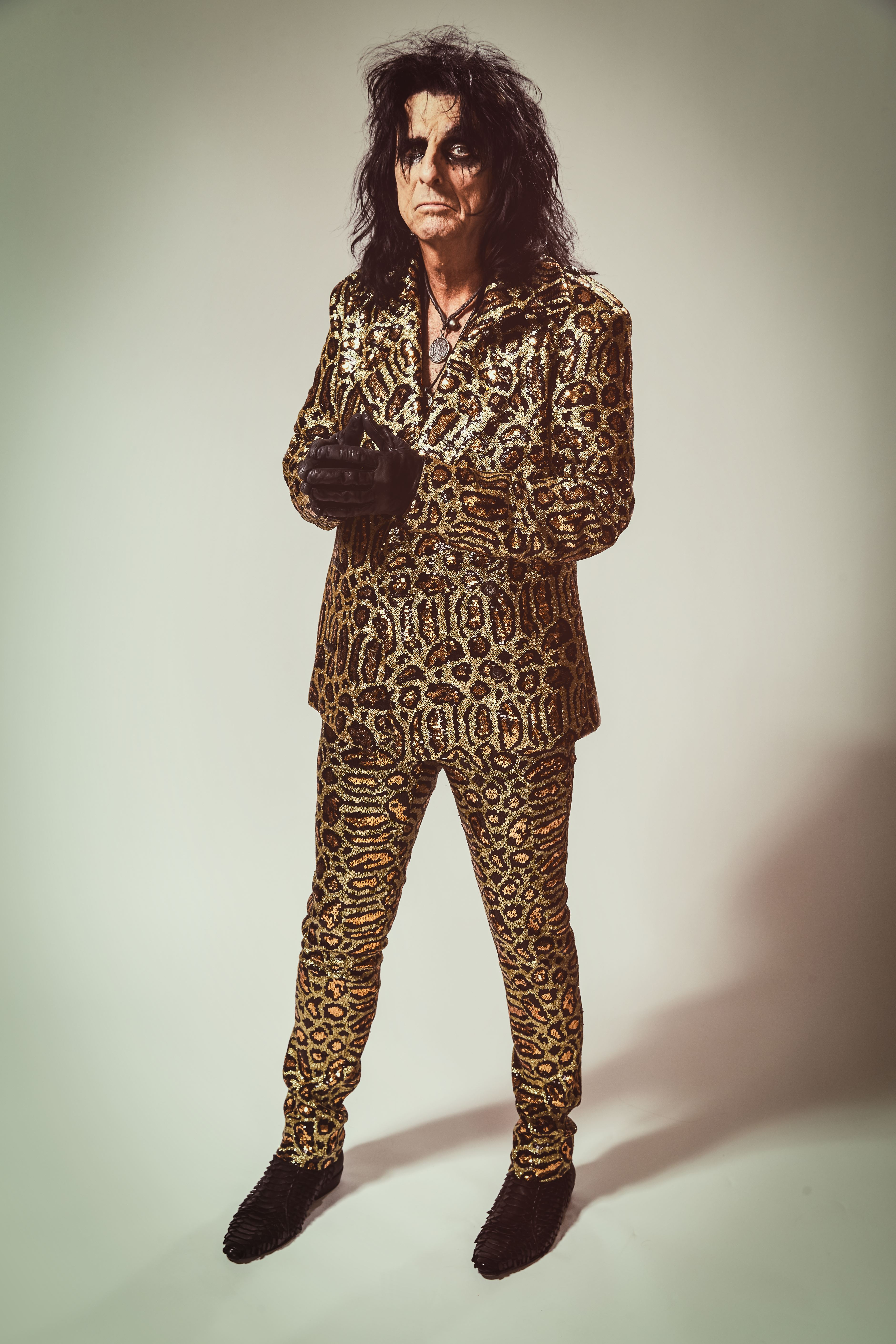 I’ve always heard that you had a business agreement where when you went solo they got some of the royalties because it was the band name. Is that the case?
Oh, yeah. Absolutely. When we broke up, I said to our manager, “Shep, figure this out so everybody’s happy.” I was at a point where I was still ready to go on. I probably should have taken a break, but we went right into Welcome to My Nightmare, which ended up being a two-year tour without a break. It almost killed me. But what happens is when you get a successful album and a successful tour, that means you have to work. I wasn’t expecting it to be as big as it was. So at the end of that tour, I was fairly wiped out.

You wrote one of the songs you did with the original lineup, “Genuine American Girl,” from a transgender point of view. Whey did you want to do that?
We had a dark sense of humor to what we did in Alice Cooper in 1969 to ’72. When Neil brought the song in, “I want a genuine American girl,” we worked on it for a day. I went, “No. I wanna be a genuine American girl.” We all looked at each other and went, “Oh, yeah. That’s perfect.”

That song is a definite satire, with what’s going on now. I used to play golf with Bruce Jenner. I’m trying to figure out in my mind the weirdest story of the last year. Was it Bruce Jenner becoming a woman, Bill Cosby becoming what he became, or the Cubs winning the World Series? All three of those should never have happened.

Have you talked to Caitlyn since she’s transitioned?
No. I really haven’t. It would be interesting. First I would say, “Are you hitting from the ladies’ tees now?” Because he could really hit the ball really well.

I think it’s cool that Caitlyn is living her life the way she wants.
It’s really interesting that it’s the world’s greatest male athlete – Bruce Jenner, the decathlon champion, that everyman in America that everyone looked up to on the Wheaties box. If somebody would have told you when he won the decathlon, “Oh, yeah, in 20 to 30 years, he’s gonna be a woman,” you would have gone, “What planet are you from?” I’m just talking about the series of events, not the morality of it. It’s just the strangest thing. It’s something out of a Kurt Vonnegut book. And the same thing with President Trump. If somebody would have told you 30 years ago that Trump was gonna be president, you’d go, “Oh, come on.” It’s a very strange, paranormal world we’re living in.

People pegged the original Alice Cooper group as cross-dressers in the late Sixties. What was going on then for you all?
The funny thing was, we had girlfriends and the [girl group] GTOs were around, and I always thought, “If you wear a pair of black leather pants and boots, why not wear your girlfriend’s slip if it was torn and had blood on it?” It makes the audience go, “What was the story behind it?” And you never tell them the story. The guys in the band were just being as outrageous as possible. It was our defiance more than anything else. Nobody was gay in the band and nobody was a cross-dresser. It was the beginning of glam. So we didn’t mind sort of spitting in the face of what society said was tough. I said, “Our band will go up against anybody anytime. Even if we’re wearing slips.”