17 Things You Learn Hanging Out With Adele - Rolling Stone
×

When Adele sat for her Rolling Stone cover-story interviews in early October, the world had yet to hear 25. The album and its first single, “Hello,” were weeks away from breaking every available record, from video streams to first-week sales, but Adele wasn’t focused on those possibilities. “I don’t care if 10 people buy the album as long as those, like, 10 people believe me,” she said. “That’s the most important thing to me, is just being believed.” Here’s more from Adele on her life and music.

Along with Madonna’s Ray of Light, Moby’s Play was a hidden influence on 25.
“There’s something that I find really holy about that Play album,” Adele says. “The way it makes me feel. Even though there’s nothing holy or preachy about it. There’s just something about it — maybe the gospel samples. But it makes me feel alive, that album, still. And I remember my mom having that record.”

She doesn’t subscribe to any streaming services.
“It probably is the future, but, eh,” she says. “There are kids I know who are, like, nine who don’t even know what a fucking CD is! I’ve got my CDs out on display in my house just to prove a point. Maybe CDs will have a massive comeback like vinyl did. Actually I think cassettes, just to be a pain in the ass! [Laughs] I’ve got all my Destiny’s Child cassettes!” (That said, the decision not to stream 25 was made close to the last minute. “At the moment, no call is being made,” Adele’s manager Jonathan Dickins said in early October. “And that’s what I’m saying to you, that’s what I’m saying to the label, and that’s what I’m saying to the people I’m speaking to at various streaming services.”)

Seeing a recent Bette Midler concert helped shape her ideas about playing intimate shows in large venues.
“Bette Midler is just my absolute fucking hero,” says Adele. “I absolutely adore everything about her. I think she’s so talented. I felt like I was watching the last legend that’s left. Like, proper, old-school legend. And she was absolutely fucking amazing. Her voice was amazing, the show was amazing, the humor was amazing. It was, like, the best show I’ve ever, ever seen. And that was in an arena. Obviously she’s fucking Bette Midler; I’m not Bette Midler. But it does work. I’m obviously not going to put on a show like Bette Midler, because it’s almost musical theater, but the talking thing worked in that venue. You’re hanging on every word.” 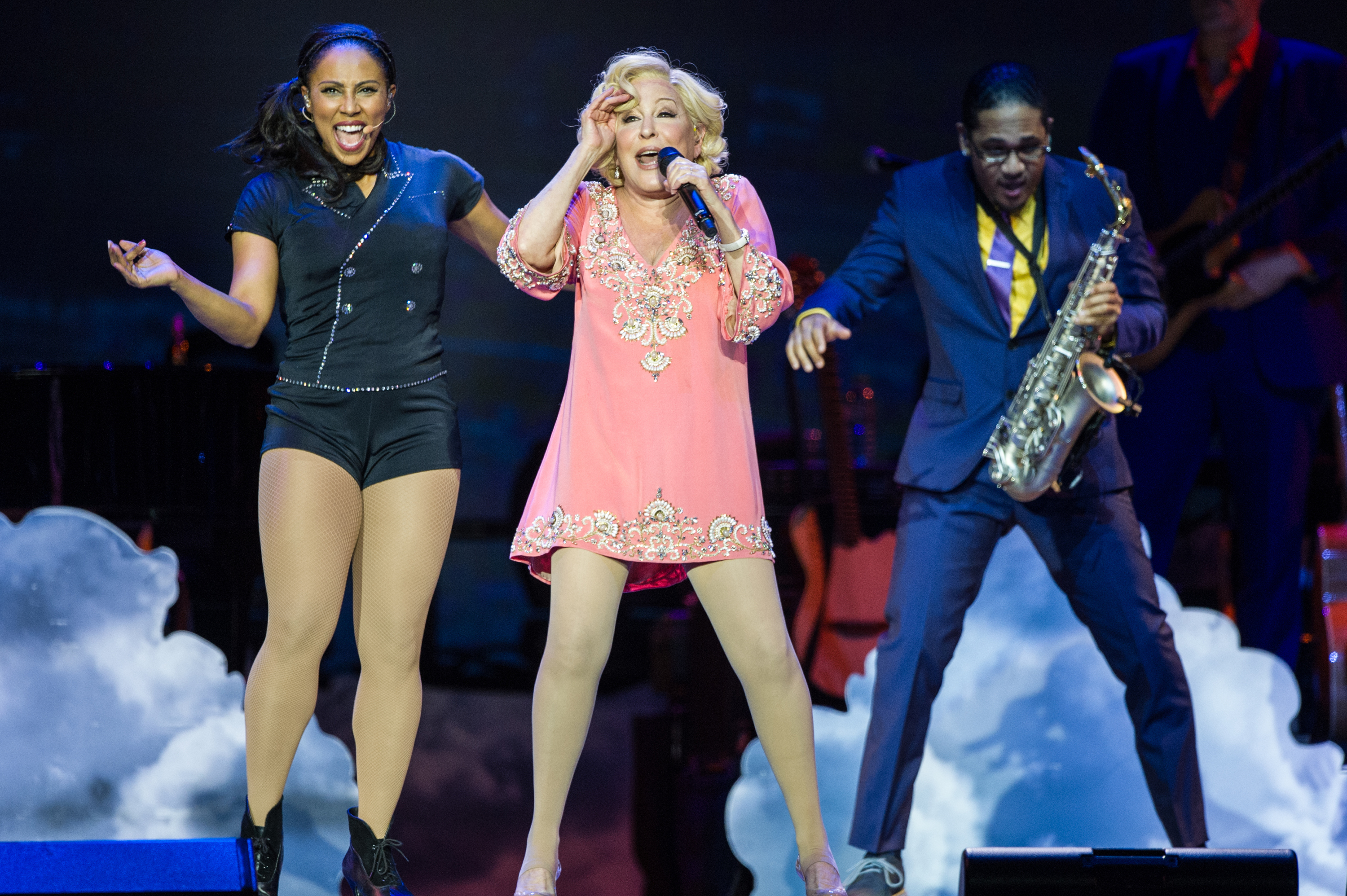 She never got all that scared after suffering a vocal hemorrhage in 2011.
“It just felt like someone had pulled the curtain or closed the door in my throat,” she says. “And you could feel there was something in my throat stopping me from being able to talk or sing properly. My doctor was great, you know? He was like, ‘This is fine — you’ve got a very common singer’s injury.’ He was like, ‘I’ve seen this a million times; I’ve fixed it a million times,’ so I didn’t ever really feel frightened. … John Mayer had vocal troubles about the same time as me, and he was an angel. He reached out and really reassured me.”

Among the many outtakes from 25 is one song Adele is particularly excited about, written with “Hello” co-writer Greg Kurstin.
“I feel like I’m a bit young tossing it right now, but it’s a really great, great song,” she says. “It’s like Celine meets Meat Loaf meets, like, Barbra meets, like, Beyoncé or something. It’s, like, all of my wet-dream idols [laughs]. But it’s really, really great, actually. We didn’t finish it in time, and also it just felt like maybe I should be, like, 32 when I do it rather than 27? And there’s definitely four or five other songs that I would definitely revisit. And it depends what place I’m at in my life, then. It might be completely irrelevant to me, then. I don’t want to put a song on the record just because it’s good if I can’t relate to it.”

There are also still unheard songs from the 21 sessions.
“I only had, like, three or four more songs,” she says, “but they were still very good songs that I haven’t gone on to use, because they’re from a completely different period in my life. I just don’t relate to them anymore. I’m sure one day they’ll see the light of day, whether it’s me or someone else singing them.”

One of the last songs cut from 25 was “Why Do You Love Me,” which ended up as a bonus track.
“I don’t want to put a song on because only I fucking connect with it,” she says. “And ‘Why Do You Love Me,’ I felt like no one else was really connecting with – in terms of my friends and people that I work with. I loved it, but everyone else was just like, ‘eh‘ whenever they heard it.

She wishes people would talk normally to her.
“People just tend not to talk to me,” she says. “Or I’ll be like, ‘Oh, what have you been up to?’ And they’ll start telling me, and then mid- sentence, they’ll be like, ‘Oh, well, that’s not very interesting compared to what you’re doing.’ But I want to hear about what everyone else is doing. And those are the things I can write about — you know, other people’s lives. It’s something I’m interested in writing about, rather than always writing about myself.”

She has no beef with Phil Collins, who was disappointed he didn’t get to write with her for 25 after she initially approached him.
“I met up with him and he was so nice,” she says. “He’s such a genius. But I met up with him in London super-early, like well before I was starting the record. And I had this song in mind and I can’t remember if I gave him a copy of the song or if I gave him a chorus or something, and then I just chickened out of everything. I went, ‘Oh, I’m not ready.’ And he called me a slippery fish [laughs]! I think he interpreted it that I decided I didn’t want to work with him, but actually I decided I didn’t want to write a record, period, at that point. But yeah, there’s no bad blood there, or certainly not on my half.”

She sings all of her own backing vocals on her albums.
“It takes me forever!” she says. (Adds “Hello” collaborator Greg Kurstin, “She is her own girl group, and she knows what she wants to do.”)

Adele has an odd, vivid association with “Hello.”
“I have this memory whenever I sing that song,” she says, “where I’m walking down my old road when I’m about eight, and you know when you walk alongside a fence, like with all the bars, and you just ripple your fingers along? I can feel the sensation in my hands so vividly when I’m singing it. It’s so weird. I don’t know why, nothing special happened that day. Like I’d been at the park with my mum. And at the end of our old road was like a dump, like an actual dump where you went to, like, dump stuff you didn’t want, and I remember walking past that and there being a line of traffic of people waiting to like drop old microwaves in and I remember it so vividly. So it’s really odd, and I don’t know why I think of it when I sing it ’cause it’s not about that moment. It’s so weird!” 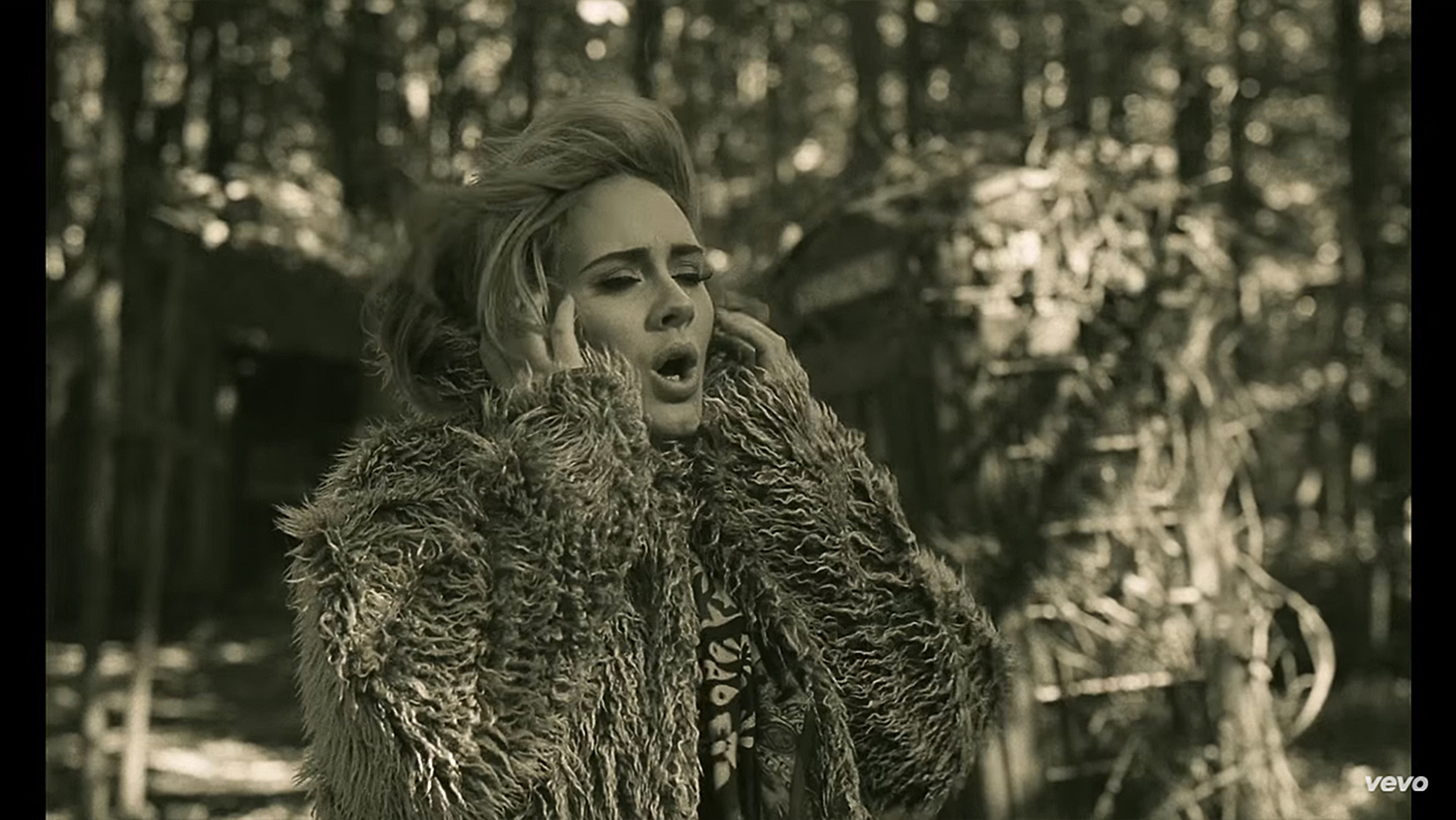 She had intriguing conversations with U2’s Bono, who is a fan.
“He did seem genuinely intrigued by me,” she says. “He was always asking about my method and I was like, ‘I haven’t really established one yet!’ I was like, ‘I’m still like only two albums deep!” But he said the most interesting thing. I said to him, like, ‘How can you write so many amazing songs about one person?’ Meaning his wife. And he said they were all about God, which I thought was so fucking amazing. It never even occurred to me that you could write ‘With or Without You’ about God. And I’m not religious myself but I appreciate religion so deeply because when my grandpa died, I don’t think my nana would’ve got through it without her faith, so the comfort that religion gives people I’ve got all day long for.”

Having a kid has left her pretty much unable to hold a grudge.
“I’ve only got so much capacity to worry now,” she says. “So you have to really pick what you worry about because you just don’t have, like, the strength to carry all that fucking baggage. So I had to let go of a lot of stuff — and I don’t like letting go of anything! I like to hold a grudge! And 25 is an album about reaching out to everyone that I’ve ever loved in any way, shape or form and admitting that I was wrong sometimes.”

25 almost opened with “Send My Love (To Your New Lover)” instead of “Hello.”
“I was torn between them,” Adele says. “But I think ‘Hello’ is a bit more representative of the record, and oh, fuck, it’s the perfect song to come back with. It’s very conversational, which I think is important.”

She doesn’t see herself as a pop star.
“Pop-pop music, it doesn’t move me,” she says. “But I love it. I love it to be the soundtrack to my life, and it gets me excited for my day and stuff like that, so it still has a huge part in my life. But I don’t think I could pull off being like a pop-pop star. I have no desire to, either, and I feel like unless you’re willing to reinvent yourself all the time, like Madonna — and I think Taylor has been doing a great fucking job with that – unless you have the ability to do that, I think it’s just a dangerous world to step into because it’s very short-lived and I don’t have it in me to reinvent myself a lot, to flip in and out of genres and styles and trends. I just don’t have the ability to do that.”

She has no plans to ever retire from recording.
“I will be making records for the rest of my life, I think,” Adele says.