This month, the 1975 scored their first Number One album with the unabashedly ambitious I Like it When You Sleep, for You Are So Beautiful Yet So Unaware of It. It wasn’t easy: the band spent three years touring nonstop while frontman Matt Healy coped with depression, fractured relationships and drug issues. He sings about it all, backed by synths and Eighties pop-funk grooves. The band didn’t hold back while spending time with Rolling Stone for a recent profile. Here are some of the big takeaways.

The band is heavily influenced by emo
Matt Healy is an encyclopedia of obscure bands from the Nineties and early 2000s, including Joan of Arc and American Football. “I was never, like, a super cool dude, walking-down-getting-laid-in-a-leather-jacket kind of teenager,” he says. “I was listening to Bright Eyes really neurotically. He was like the Dylan of the time.”

The 1975 on Channeling Personal Issues Into Chart-Topping Rock

Even though it’s not obvious, the band still see the genre as a big influence. “People really relate to it, this emo-ish kind of thing,” says drummer George Daniel. “It’s the new emo. If you take the word, emo at face value, where it came from emotional music, not the pop-punk crossover nonsense. It just was a pigeonhole for emotional rock music that came out at a certain time. What it means is that it was over the top and a lot of it was super ridiculous. It addressed stuff like depression and talking about relationships. We connect with our fans in an extreme format. I don’t think that’s a reflection of any musical connection with that world at all. The tribalism, and the fans feels like we’re theirs.”

Another big influence on Healy’s lyrics: the Streets
“The biggest lyrical influence for [Matt] has always been Mike Skinner,” says Daniel of the English rapper better known as the Streets. “He was somebody writing about a pretty much middle-class scene of people who were within a world of the garage scene: They were the ones that wanted to stay inside and smoke weed. It was the social narration that Mike Skinner always had that was a massive influence.”

Watch the 1975 discuss “selfie culture” and facing up to fame:

Healy isn’t sure he should be on Twitter
On Twitter, Healy has angered One Direction fans and admitted to using band merch money to buy weed. “A thing that I struggle with is that you have these followers. There’s the whole ‘stay in your lane thing,’ I’m very aware that I’m a pop star and I’ve chosen my path. Do I just stick to what I know, or do I stand up for the things that I believe in and voice them and hopefully try to kind of empower people, or is it arrogant that I even think that I could empower young people, or should be doing? Should I shut the fuck up? Do you know what I mean? A lot of the time I kind of think that’s what I should do. I really struggle with that. I really do.”

But he’s not afraid to look what fans are saying about him online
The singer knows what people say: “I think the [common theme] is that I’m quite obnoxious, but quite sincere. I’m quite happy with that. You can tell me to stop licking stuff or thinking I’m the messiah. But you can’t doubt my sincerity. You can’t doubt that I’m really passionate about what I really care about those and I’m invested in what I do.”

They wanted to double down on excess, and troll critics, with their new album
“Every criticism, every compliment, every conversation surrounding that first album has been included and been exaggerated,” says Healy, “whether it be the accusations of me being like I swallowed a dictionary. There’s more emo. The poppier bits are poppier, the Eighties bits are Eighties-er. It’s more like a John Hughes film. It’s like a distillation of everything that preceded it, so that’s one of the things that I’m really proud of.”

Healy is not shy about past drug use
“Ugh!” is about coming down from cocaine (“Hey boy stop pacing around the room/Using other people’s mirrors as a mirror for you.”) “I’m not lying: I’m from a white upper-middle-class background from Cheshire, and I’ve been in a band that’s been involved in everything from, like, big festivals to fashion over the past three years,” says Healy. “The social group around me involves cocaine. It does.”

Healy is comfortable discussing his past with cocaine and heroin – but understands why his pop peers aren’t as open about their drug use. “I think that’s because they don’t have the infrastructure. Their career isn’t based on fragility and vulnerability. They don’t have fans that completely give them the benefit of the doubt. So it would probably be quite a scary idea for them. But I’m very safe here. I live very much in the world of the 1975 and I’m not going to hurt anybody.” 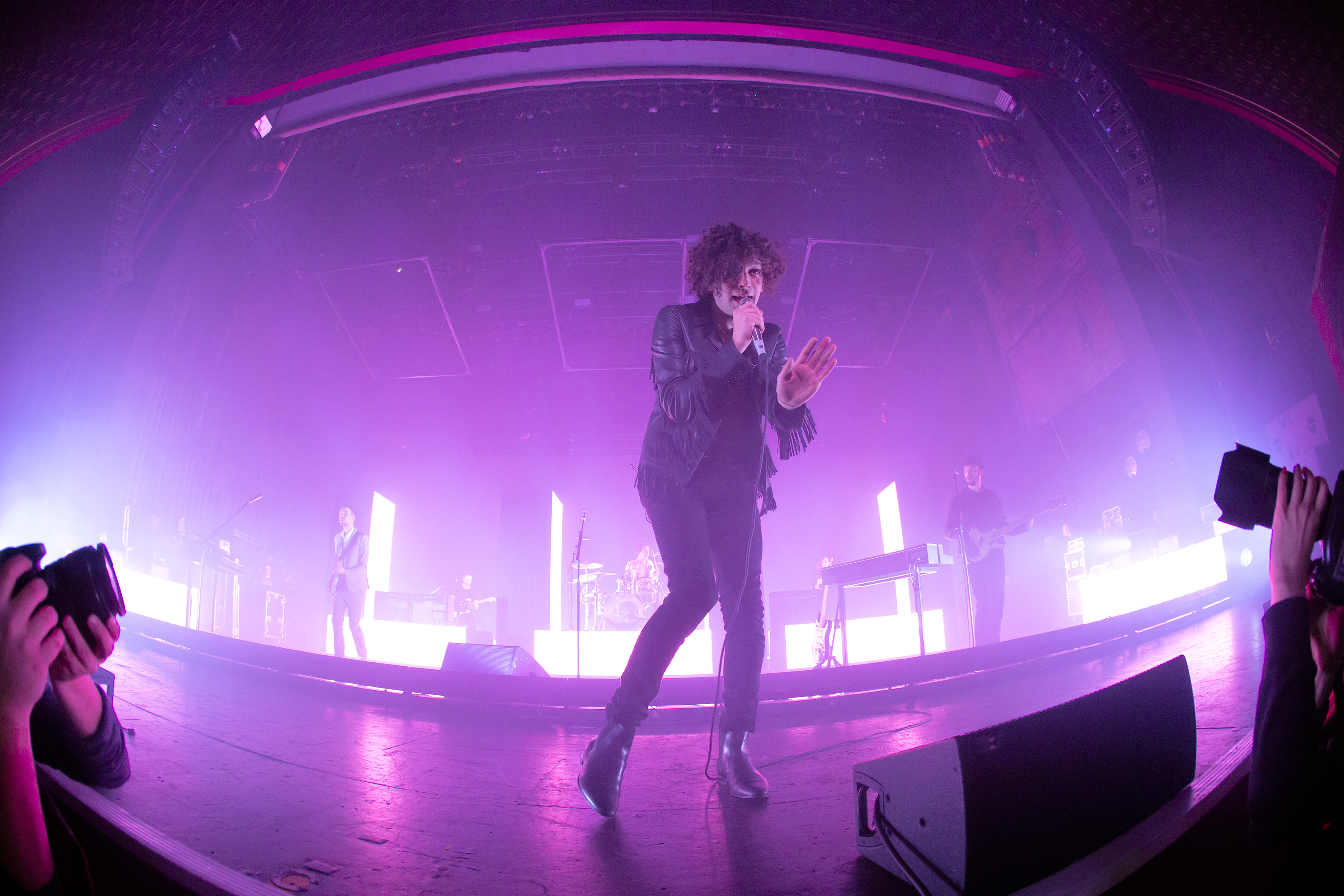 The band have existed for more than a decade, under names like Drive Like I Do and the Slowdown
But it took a long time to find their sound. “We couldn’t fucking get arrested and get a record deal when we were 17, 18,” says Healy. “By the time we got 23, 24, we had all these songs that we couldn’t let go. When we dropped our album, it was like our greatest hits.”

Their funky single “Love Me” takes aim at celebrity culture that Healy wants no part of
“It’s this whole ‘squad-goal-zy’ thing,  this aspirational, upper-echelon social-hierarchy. The whole thing is kind of constructed. The whole thing of aspiring to people in a picture, used to be reserved for, you know, the Grammys, and Paul Simon stood next to George Harrison and he stood next to Bowie, and it would be because they’d done something! And their art had elevated their social status that you wanted to be in that group of, like, elite people. Whereas now, it’s like people just doing it because the other people are famous. They’re constructing this, like, friendship by pictures.”

Healy doesn’t fully respect artists who don’t write their own material
“When people go look at the credits, every song is written and produced by me and George. Every single note. We produced it. It’s like that Chris Rock bit, about wanting credit for shit you’re supposed to do, like, “I take care of my kids,” taking credit for things you’re supposed to do. The art is the culmination of everything. People like Michelangelo, in addition to artists, they were chemists, alchemists that made their own paint. You can’t just have a good voice. Until they sit down with a musical instrument and sing a song they’ve written and composed entirely by themselves, I refuse to be truly moved by them.”

But when confronted with the idea that artists like Frank Sinatra didn’t write their material, Healy changes his tune. “See,” he says, “then I feel like what I said was stupid.”

Healy had an onstage meltdown in Boston in 2014
This singer cried throughout the set, telling a fan, “You don’t have the right to love me.” “I was just doing too many drugs, too hungover all the time, drinking too much, girl stuff, getting more famous, all of this stuff. Before I went on stage, I was on a bit of a downward spiral. It was like, ‘Fuck it. If you want this character, I can give you that. I felt like, if I want to cry, I’m going to cry. I wanted to see what it was like being truly indulgent, like a true tragedy. It was kind of cool, actually. I think I enjoyed it. I wouldn’t do it again. It wasn’t fair for the people who were there.”

Touring nonstop for three years was more difficult than they thought it would be
“Beginning in January last year we realized how much it really affected us,” says Daniel of the brief hiatus the band took after promoting their 2013 debut. “We were just expecting this resolve when we finished touring. It was so easy to be stressed and miserable. We were all left with this existential  nonsense surrounding everything we were doing. You realize it’s three years later in your life and you don’t know what happened. It’s quite a naive thing to say, we were all mental for awhile. I just didn’t really feel qualified to make a record. I didn’t feel ready and I didn’t feel the conviction to get the job done.”

Healy just bought a Victorian townhouse in London
“It’s kind of become an HQ for all of us. It’s a nice place. I’ve only been there for a couple of months.  It’s quite humbled me a little bit. It’s a different outlet. I can do things to it and I can persevere it, cultivate it. I’m really proud of it. It’s the most grownup thing I’ve ever done. But I still have a mattress on the floor.”

Healy enjoys his “sexually bizarre” persona
“I bring a self-awareness to it. I’m not, like, Vanilla Ice basking in the glory with my shirt off. When we started getting bigger, and the dynamics started to present itself of the screaming girls and me, that had never happened before. But you can’t stop it. So when you do something and they scream, you have to kind of buy into it, in a way.

“It’s just about confidence. There’s no leather jackets or cultural relevance or getting laid going on in my head. It’s the pursuit of the form of it and it’s like a real thing that’s really deep within me, so I’m very lucky now because that’s twinned with this kind of amazing appreciation. ‘This is what I’m supposed to be doing.’ It’s kind of like requested of me.”

Healy is scatterbrained and “obsessed with women”
“I find it very difficult to get lost in the moment,” he says. “I used to be, like, a very distracted young person, stuff like that. I used to be constantly moving on to the next thing. That’s why I smoke so much, and drugs are such a present part of my life, an on-and-off kind of thing. And my relationship with women and stuff like that, it’s almost like kind of looking for God in those kind of things. I’m obsessed with women. Not in a kind of misogynistic way. I don’t go through women one after the other all the time. I’ve slept with women, like a lot, like most young men. I’m obsessed with women. And I’ve kind of always looked for God in women. Because women are the closest thing to divinity, for me. There’s a quote for you, fucking hell.”