Since signing the rapper 03 Greedo in 2017, Alamo Records founder Todd Moscowitz has grown accustomed to playing catch-up. “This is how Greedo works,” he explains. “You get a phone call one day: ‘Hey, I made four albums over the last few weeks.’ Oh really? ‘Yeah, I went in with so and so, and we did 30 records. Then I went in with this producer, and we did 10 more records.'”

Last July, 03 Greedo was sentenced to 20 years in prison on charges of drug trafficking and unlawful possession of firearms. But his relentless pace in the studio before his incarceration ensures that he can continue to release music while he is behind bars. Still Summer in the Projects, an entire album recorded with the hit-maker Mustard, is due out on March 29th. The first single, “Wasted,” a nimble, needle-nosed collaboration with YG, will be available on streaming services at midnight.

Greedo and Mustard have been familiar with each other’s work for a decade, as they both worked to raise their profile in the Los Angeles rap scene. “I knew Mustard since like 2009, and we always crossed paths, but we never worked,” the rapper explained in an email. “He blew up as I was in jail [on a previous occasion], but when I got out and I got my shit buzzing, he hit me up. I came to the studio to do one song and then we ended up doing 20 songs in 3 days.”

In typical Greedo fashion, Moscowitz found out about the album after it was already mostly done. “One day he’s like, ‘oh, I got an album with Mustard, and Mustard’s gonna hit you about it,'” the label head remembers.

Moscowitz still marvels at Greedo’s speed in the studio. “He’s one of the most prolific artists I’ve ever worked with, and I’ve worked with some prolific ones,” he says. “He does an enormous volume of records. And some are better than others, but he’s amazingly consistent. Some people I’ve worked with who are high-output, they’ll have a ton of throwaways and they’ll use that to hone it down to a really good album. He’ll do something really good, end to end, with 12 or 15 cuts, in 3 days.”

After Greedo went to prison, Mustard continued to tinker with their songs until they were finished. “Mustard is a perfectionist, he was working on it for a while, doing whatever magic Mustard does,” Moscowitz explains. “Then he said, ‘Here it is.'”

It’s easy to imagine Still Summer in the Projects will be well received in Los Angeles. “Two of the biggest people in the game coming together from the same area,” Greedo says. “[Mustard]’s from the West side and I’m from the East side. It’s important to the people.”

Working with Mustard, who has produced national hits for Tyga, YG and Jeremih, among others, may also help introduce Greedo to a wider audience. Mustard beats, perfect for cars and evergreen in clubs, have served in the past as breakout vehicles for artists like Ty Dolla $ign and Tinashe. And while Greedo has a fervent following, none of his songs on Spotify have more than five million streams to date. “Some people aren’t aware of him outside of the region, but they’re becoming aware of him,” Moscowitz says. “His popularity is growing every month, we’re seeing it in his socials and his streaming.”

Alamo plans to fan the flames: Still Summer in the Projects will likely be the first of several new Greedo albums to be released this year. “We have a Hit-Boy album coming up next,” Moscowitz says. “We’ll probably have a follow-up album three months after, and then another three months after that. He’ll probably end up putting out three or four albums and tapes this year, maybe an EP or two as well.” 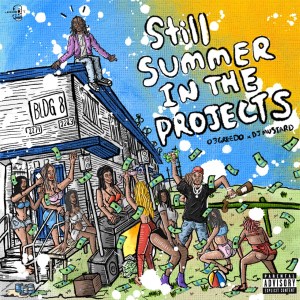 “I think Greedo’s going to be one of the extremely rare artists who comes out of being incarcerated bigger than when he went in, because he did so much work and has so much material we can put out while he’s away,” Moscowitz adds. “If you’re unfortunately in that situation, quite often your popularity decreases. I think he’s going to be the exception to the rule.”