Boston’s Fenway Park has boasted some memorable names since it began hosting concerts again in the early 2000s, including the Rolling Stones, Paul McCartney, Bruce Springsteen and Aerosmith.

Zac Brown Band can now be added to the list, and it was clear on Saturday night that Brown was ecstatic to join the roster.

The Georgia singer-songwriter, who ditched his signature beanie for a top hat, could not stop grinning throughout his band’s splendid two hour and 40 minute show. He told the sold out crowd, “This is my favorite place we’ve ever been of any show we’ve ever played.”

On a picture perfect night, the septet closed out its two-day stand at the home of the Boston Red Sox — playing for a combined audience of 70,000 fans — with an epic performance featuring over 30 songs, including a wide range of covers that ran the gamut from classic country to heavy metal. (It was actually Brown’s third appearance at Fenway, as he was also a surprise guest at Billy Joel’s Thursday night concert.)

The night began on a low-key note as the band ambled onstage without fanfare to sit on stools for a short acoustic set that kicked off with the laid back ode to island life, “Toes.” Acclaimed luthier and guitar player Wayne Henderson joined in for an instrumental “Take Me Out to the Ballgame,” with the audience providing the vocals, followed by a harmony-rich take on Manfred Mann’s “Fox on the Run.”

The acoustic set ended with a bang thanks to a countrified run through Aerosmith’s “Sweet Emotion.” (It was not ZBB’s only tip of the cap to a hard-rocking Boston band, as the encore included the Dropkick Murphys’ stomping “I’m Shipping Up to Boston.”)

The first electric set mixed ZBB favorites like “As She’s Walking Away” and “Chicken Fried” with crowd-pleasing covers including “Times Like These” by Foo Fighters and Jimmy Buffett‘s “Volcano,” which was appended to the simpatico “Where the Boat Leaves From” and featured frequent ZBB songwriter Wyatt Durrette on vocals.

After a short intermission, the band returned for another full set that included hits such as “Colder Weather,” the comic ditty “Sic ‘Em on a Chicken,” and covers of Led Zeppelin‘s “Kashmir” and “Can’t You See” by the Marshall Tucker Band, as a helicopter whirred over head like a dragonfly, capturing the event for further use in a video.

Each member of the group got several chances to shine, with fiddler Jimmy De Martini in particular going to town on a fast and furious rendition of the Charlie Daniels Band’s Faustian classic “The Devil Went Down to Georgia” and providing an almost flute-like solo on John Mayer‘s “Neon.” (ZBB guitarist Clay Cook co-wrote the latter track with Mayer, a former band mate and friend from their days at Boston’s Berklee College of Music.)

The band returned for its encore clad in full-body, glow in the dark skeleton suits and masks to play the fierce, eerie rocker “Day for the Dead” from their latest project, The Grohl Sessions, Vol. 1.

Before closing out the night with a faithful cover of Metallica‘s “Enter Sandman” — featuring Brown on bass, subbing for John Driskell Hopkins who provided lead vocals with a playfully evil glint in his eye — Brown told the crowd, “Thank you for the two best nights in our career so far.” 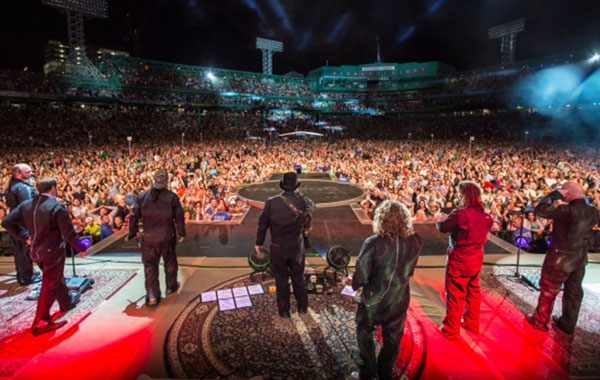