If you went to a concert in 2014 you may have noticed that country music is a drunken mess. The year was country’s Summer of Lush and nowhere was the stumbling state of the bro-dominated genre more on display than at Luke Bryan’s Pittsburgh stadium show on June 21. Sure, the bill boasted four of country’s biggest names — Dierks Bentley, Lee Brice, Cole Swindell and Bryan — but, in true tailgate-and-tan-line fashion, the day’s defining moment wasn’t on the stage but in the parking lot, where police made dozens of arrests, paramedics responded to more than 100 911 calls and revelers left behind thousands of pounds of garbage. After similar circumstances plagued a Kenny Chesney concert at Pittsburgh’s Heinz Field in 2013, the city’s mayor, Bill Peduto, treated the Bryan incident like the latest outbreak in an ongoing epidemic. “The continued trashing of our city has to stop,” he said.

An undeniably hilarious local TV news clip that was brilliantly remixed with WWE commentary captures one shit-faced concertgoer walking sideways, losing his balance and falling to the ground, landing on his back. Seconds later, looking like a dazed prizefighter after a knockout punch, the man tries getting back on his feet, only to lose his balance again, face-planting into the unforgiving concrete. Not surprisingly, the clip went viral.

Inside the stadium, the soundtrack to this battle royal of debauchery was almost as intoxicating, thanks in part to the fact that Swindell’s set list featured painfully appropriate numbers like “Brought to You by Beer” and “Ain’t Worth the Whiskey,” while Brice provided such art-imitates-life-imitates-art selections as “Drinking Class,” “Parking Lot Party” and, of course, “Beer.” Bentley brought the house down with his summer hit “Drunk on a Plane,” and Bryan — a singer who, in 2014, stumbled and tumbled off stages so many times it’s hard to believe he’d pass a field sobriety test even when not intoxicated — played the woozy one-two punch of “Drink a Beer” into “Drunk on You” during his headlining set. 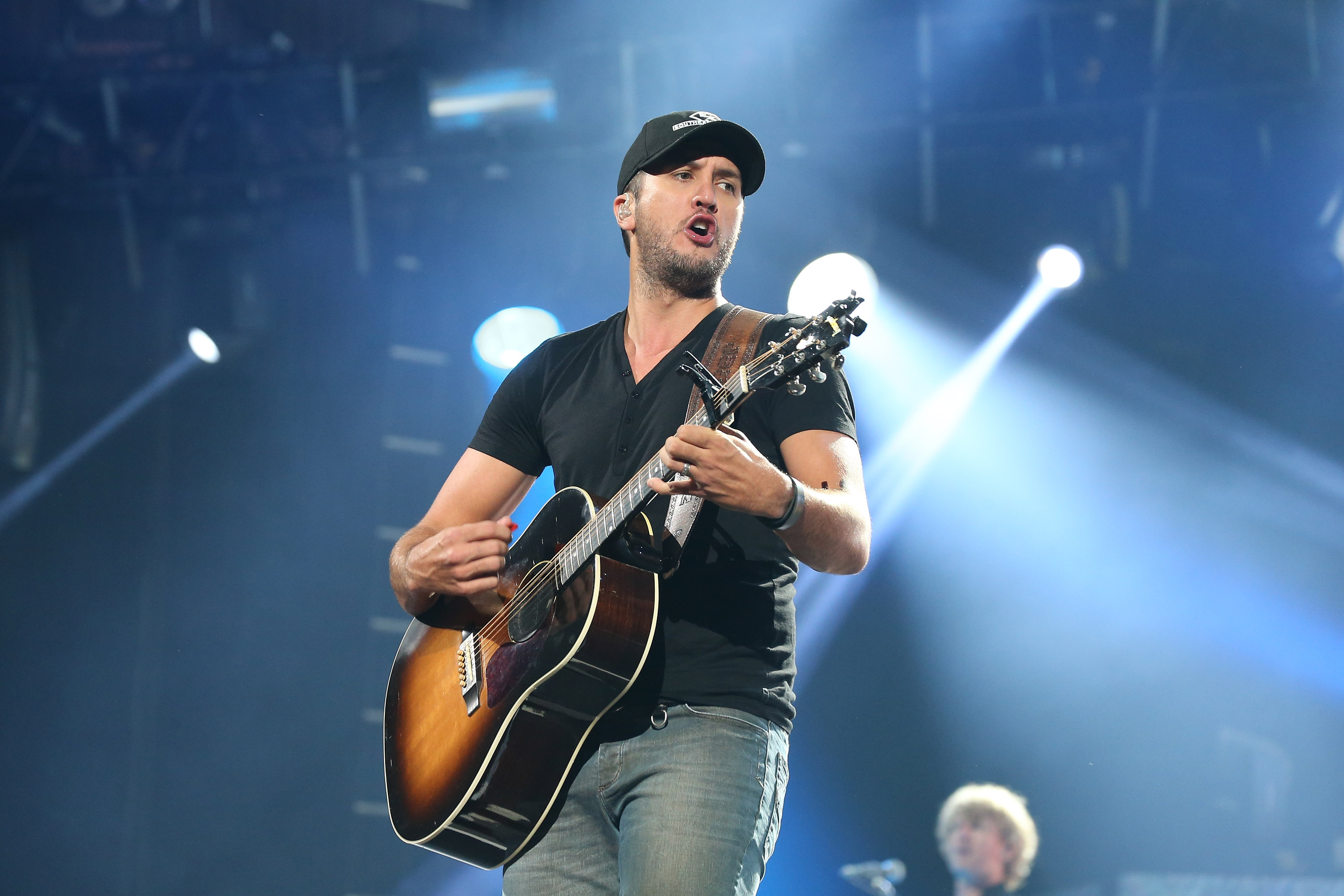 As if “Drunk on a Plane” wasn’t already enough of an anthem for embarrassed alcoholics, a couple hundred miles across the Keystone State, at a Bentley show in Hershey in November, another seemingly intoxicated concertgoer got a spectacularly mortifying 15 minutes of fame. During a performance of the song, the singer plucked a couple girls from the crowd to dance, take selfies onstage and, for one, upchuck in front of the entire arena.

But spring-break-rivaling revelry wasn’t just the rule of the day in stadiums and arenas — booze tunes also drowned the country airwaves as well. Of Billboard‘s Top 100 Hot Country Songs of 2014, a whopping 68 featured references to drinking (69 if you consider Bryan trying to pour a little sugar into some poor girl’s Dixie cup an alcohol reference). And at least a dozen of those beer-dripping, rum-drenched, whiskey-soaked hits had liquor references in their titles. Devise a drinking game with alcohol-themed songs on country radio this past year — like Brothers Osborne’s “Rum,” Frankie Ballard’s “Sunshine and Whiskey” and Tyler Farr’s “Whiskey in My Water” — and you might die while playing.

While drinking tunes are nothing new to country music, the reign of bro country has ushered in a whole new era of lifestyle songs that don’t use booze as sad-bastard cautionary tales the way George Jones’ “If Drinking Don’t Kill Me” did, or even as straightforward pick-up fodder — see Jimmy Buffett’s “Why Don’t We Get Drunk.” It can be argued that alcohol is to current country music as weed is to reggae, were it not for the fact that reggae at least comes from a country where smoking marijuana is, for Rastafarians, literally a religious practice. No, booze nods in today’s country are more like ubiquitous weed references in Nineties hip-hop. They’re an easy way to evoke a sense of backwoods, bonfire populism at a time when carefree party songs get big radio spins. Today’s country stars soak their verses in booze, tossing off drinking references like boring status updates from keg parties in Anytown, USA, in an attempt to come off as guys and gals listeners would like to have a beer with — otherwise known as the George W. Bush Syndrome.

But Dubya, a recovered alcoholic, doesn’t drink. Neither does “Bottoms Up” singer Brantley Gilbert. Brad Paisley, who fantasizes about taking tequila shots while drinking beer in “River Bank,” doesn’t imbibe either. Chesney once told the Tampa Bay Times, “I don’t drink that much unless I’m on my boat,” but he’s still down to be the Jack in his girl’s Cherry Coke in “American Kids.” Tim McGraw is a teetotaler these days too, but meanwhile back at mama’s there’s beer in the fridge. Either singers like Gilbert and McGraw are trying to test their own resolve by singing songs littered with relapse triggers, or they’re playing the game to get airplay and have hits.

To be sure, Music Row has been drunkenly spiraling towards rock bottom at least since Toby Keith started performing “Red Solo Cup” while flanked onstage by 10-foot-tall red Solo cup inflatables. Last year, Keith, whose current single is “Drunk Americans,” gave us “Drinks After Work.” This year, Little Big Town inspired us to skip work altogether and do a little day drinking.

If it was hard to not be cynical about country music’s dependence on alcohol in 2013, it’s downright impossible now. Especially when so many of today’s rising and falling country stars are ready and willing to shill for liquor companies and the like while singing about drinking in songs that just as often tend to involve driving. While country music failed to produce a novelty-song-slash-commercial as hokey as “Red Solo Cup” in 2014, plenty of artists name-dropped liquor companies in similarly transparent displays of product placement. 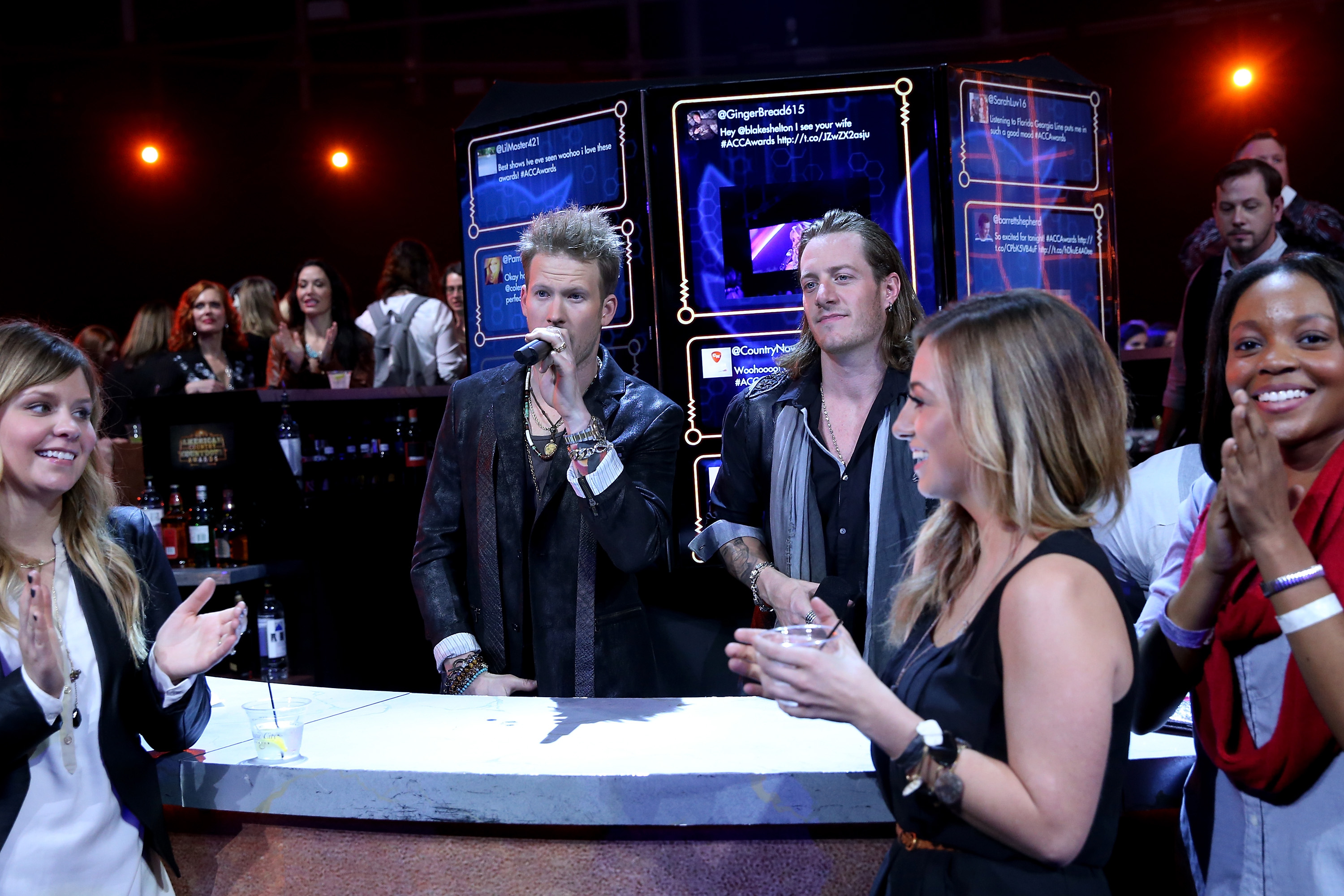 Florida Georgia Line — who hosted this year’s American Country Countdown Awards partly from behind a bar — sing about at least four different beer brands on their 2014 smash Anything Goes. Lady Antebellum boast about taking shots of Crown Royal in “Bartender.” Dustin Lynch let us know PBR is his beer of choice in “Where It’s At (Yep, Yep).” Jason Aldean, FGL and Chesney all name-checked Jack Daniel’s, while Bryan was lucky enough to kiss a girl with Bacardi on her lips in “Roller Coaster.” And congrats to Chase Rice, who, in his hit “Ready Set Roll,” found a dream girl who hits the spot like a Fireball shot. Also lucky in love is McGraw, who went lookin’ for that girl and found a “neon Jägerbomb country-oke singer.” (Certainly that can’t be a description of Faith?)

And mad props to Jake Owen, who managed to rhyme “Corona” with “Daytona” in his effervescent cracked-tallboy musical mist “Beachin’,” a song during which you’d have sworn you heard the Florida native sing the word “cocaine” when slurring the phrase “cold can.” Still, the Drunken Rhyme Scheme Award goes to Blake Shelton, who pulled off rhyming “fajitas” with “margaritas” in the passive-aggressively beige “Doin’ What She Likes.”

As 2015 dawns, it doesn’t seem likely that country music will sober up anytime soon, especially as party songs continue to dominate country radio. But perhaps artists and songwriters will change the way they utilize booze in their lyrics. There is already a hint of such transition in songs like Eric Church’s “Talladega,” which incorporates a subtle nod to drinking whiskey as a means to summon nostalgia, not as a way of racing toward the inevitable blackout. And to that, we raise our own glass.