Why Brandi Carlile, Steve Earle Are Playing in a Tennessee Cave - Rolling Stone
×

Think of it as Tennessee’s version of Colorado’s stunning Red Rocks Amphitheatre, but smaller – and deep underground. The Caverns in Pelham, Tennessee, about an hour and change drive from Nashville, is poised to become a must-visit concert venue, thanks to its naturally unique setting and an eclectic summer calendar that is persuading fans of country, bluegrass and rock to make the descent into a dark, damp hole in the ground.

Opened by founder and erstwhile ad executive Todd Mayo, the Caverns are the new home of PBS’ Emmy-winning Bluegrass Underground – a spectacle of musical spelunking now in its eighth year that features artists as diverse as mandolin god Sam Bush and free-jazz funksters Lettuce – plus a full schedule of non-televised shows ranging in style from the hard folk of John Moreland and the dreamy rock of Band of Horses to Brandi Carlile’s singer-songwriter fare and John Anderson’s classic country.

This years marks the first concert season in the “brand new” millions-of-years-old cave, and fans and artists alike are getting wise to the transformative, other-worldly qualities of the subterranean space.

Inside the Secret Retreat Where Little Big Town, David Nail Go to Write

10 Best Stoner Movies of All Time

“One thing we know is that in nature, music is naturally occurring,” says Carlile, the Grammy- nominated Americana songwriter who packed 1,000 fans into the Caverns’ stunning concert hall in late April. “We’ve only learned to mimic the sound it makes. It’s perfect harmony to play the music of nature from within it.”

Carlile’s performance marked an early highlight for the new venue, but the interest from fans was hardly a surprise. People’s fascination with caves goes back to prehistory, where they fill fables and mythologies, often presented as a mysterious connection to the spiritual realm. And folks in the South have long recognized their acoustic qualities (not to mention their refreshing mid-summer temperatures).

In 1934, Lost River Cave in Bowling Green, Kentucky, was transformed into the Cavern Nite Club, hosting performers like Dinah Shore and the NBC Orchestra. And in 1948 Roy Acuff – the King of Country Music – purchased the Dunbar Cave in Clarksville, Tennessee, which had previously hosted big band concerts by Benny Goodman and Tommy Dorsey.

But lacking today’s technology, those events were mostly held in the host cave’s mouth – right at the transition between the terrestrial and underground. At the Caverns, fans and artists find themselves hundreds of feet inside a limestone mountain, encased within and connected to the grandeur of nature itself. The setting tends to have a realigning effect on people’s mood.

It’s a beautiful, sunny spring day in bucolic Pelham, with birds chirping and the valley floor full of blooming wildflowers. But inside, the misty, haunting overtones of Tim O’Brien’s bluegrass makes the Caverns feel like a spooky, centuries-old refuge from the dangers of a dark wilderness night. That’s especially appropriate as the West Virginia native sings “Where the River Meets the Road,” a dirge about his Irish-immigrant forebears migrating over the Cumberland road to the booming mill town of Wheeling.

It seems like he’s holding back on the bluesy-gravel howl of his distinctive vocal, but each lyric cuts through the stillness like a knife, while the sound of a banjo rolls and roils over the countless craggy outcroppings of the cave itself.

“Venues like this are few and far between,” O’Brien says from the stage, joking in his characteristic dry humor that “the altitude” might be affecting this particular gig. “I have to admit this is unique,” he goes on, “but I always felt like I played underground music anyway.” 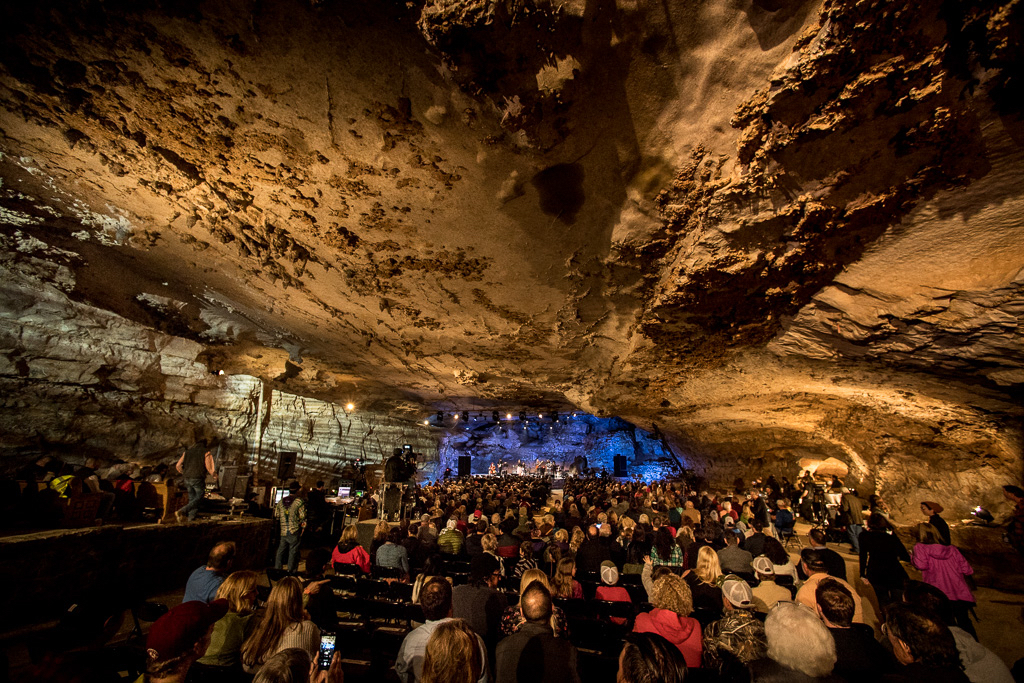 Ten years ago, the first episode of Bluegrass Underground, starring the SteelDrivers, was taped in the nearby Cumberland Caverns. The band was then fronted by a pre-fame Chris Stapleton, but it wasn’t a shrewd music-business calculation that led to the event. It was actually a Plan B vacation activity and a cheap souvenir.

“Before I walked into that cave I had never booked a bar mitzvah,” Mayo jokes. “But I guess I always had a little P.T. Barnum in me. I was always the one coming up with hair-brained ideas.”

Mayo had intended on renting a pontoon boat for his family’s Memorial Day vacation, but having waited until the day of their trip to reserve, was told he was out of luck. He and the family decided instead to tour Cumberland Caverns, and once inside the massive “Volcano Room,” he had a flash of inspiration: “Someone should book concerts in here,” he thought, looking down at the blue Plexiglas crystal in his hand purchased at the gift shop on their way in. “And they should call it Bluegrass Underground.”

A decade of well-received shows led to Emmy wins and a reputation for once-in-a-lifetime performances, but since Cumberland Caverns was already a business of its own, Mayo and the team decided to move to a new location for permanence and logistical concerns. The “new cave” – dubbed Big Mouth Cave by locals – is larger, closer to the interstate and major cities, much easier for visitors to access and doesn’t have to share space with tour groups. That means all the major equipment can stay where it is, and shows can be booked around the artists’ schedules, not the cave’s.

It took 18 months of permitting, addressing the concerns of environmental activists and plain old digging to get the site up and running. The cave is home to one threatened species – the Tennessee Cave Salamander, which is the state’s official amphibian – and there are stories of Native American remains being found inside the cave long ago. Local legend even holds that an ancient race of tiny forest folk once lived in the overgrown foothills surrounding the site.

“The Cherokee do have in their mythology these little people,” Mayo explains. “But the sign over the door that the Cherokee Nation presented to us says, ‘Welcome to the Caverns, where the great spirit brings all people together through music.’ And that is exactly what we’re doing. … Bluegrass Underground has probably done more to show people caves on television than any other show in history – maybe even more than Batman.”

Crews worked hard to remove 30 feet of sediment from inside, and also made sure the salamanders were safe by preserving the cave’s natural water flow. But a rainy February and lack of utility power kept the cave flooded until a few weeks before opening day. Still, Mayo and his team overcame all the obstacles, and the venue opened on March 24th.

“I’d say 80 percent of musicians are just super excited about it,” he says about booking acts for a literal hole-in-the-wall show. “They’ve seen it on TV or online and get how cool it is. Some get more into it than others, getting really excited as soon as they arrive, like little kids. Ketch Secor from Old Crow Medicine Show was like that. Steve Earle and Edward Sharpe and the Magnetic Zeroes were all over it, and Brandi Carlile too.”

Some artists do have reservations. One claustrophobic performer needed a Xanax just to enter the cave, but soon found the wide-open vault to be more spacious than first imagined. And at the very first Bluegrass Underground show, Mayo says Stapleton told him: “My dad worked in coal mines in Kentucky, and all I’ve done with my writing and singing is try to avoid that life. Now look at me.”

“There’s the humidity, so we take some things out to store them,” Mayo says of safeguarding equipment. “The lights and PA stay in there, but we bring out the microphones and the musicians do need to let their instruments acclimate for 30 minutes or so before they soundcheck and play, but that’s not much different from any other outdoor show.”

Carlile, too, had concerns about how dust particles in the air might affect her voice and the band’s instruments. But she was all-in after one short soundcheck.

“It was how you’d expect it to be in a cave with lots of natural reverb,” she tells Rolling Stone. “It was really incredible after 15 years of trying to re-create that sound in the studio … to hear it occur naturally in the Cavern.”

Carlile played to a sell-out crowd and the venue’s biggest audience so far. Mayo says he could fit more people inside, but 1,000 feels right for a standing-room show at the moment. Seated concerts are set up for about 750.

With understated stage lights highlighting the cave’s natural beauty and Carlile’s other-worldly vocal power filling the limestone hall, the evening evoked an ancient rite of passage – the kind of thing humans have been drawn to since the dawn of music itself, which, it should be noted, probably happened in a cave.

Mayo’s feeling good about how things are going. There were no guarantees he’d be able to replicate the success he and the owners of the previous cave shared – and it’s not exactly cheap to purchase one of your own, then spend more than a year turning it into something economically useful. But judging from the reaction of fans and artists, the Caverns could soon garner the same awareness as places like Red Rocks Amphitheater and Washington state’s the Gorge, home to the annual Watershed Music Festival.

Like the Caverns, those venues combine the awe-inspiring majesty of nature with the thrill of a live concert, and have now become bucket-list destinations for many music lovers.

“Those two venues are the perfect example of what we’re talking about,” Carlile says. “I would liken the Caverns to them in a much more intimate setting.”

But Mayo says he’s not really concerned with the potential status his cave shows might one day achieve – or how they’ll eventually be remembered. The cave itself will remain for the millennia to come, and perhaps future generations will one day find it and work out its purpose. For now, though, he’s just focused on bringing a cool idea to life.

“I fundamentally believe in the power of music, and I definitely believe that when you combine that with a unique experience like going to see a show in a cave, it just really amplifies the situation,” he says. “It brings people together, and that’s enough of a legacy to me.”