When Michael Trotter sat down on the staircase inside his home in Albion, Michigan, one day in 2017, he was ready to end his life. Grappling with post-traumatic stress disorder after serving in Iraq, Trotter thought that maybe his life insurance policy could solve his wife and young son’s financial woes if he died. “I felt like I was the weight holding them back,” Trotter says. “I had failed, I guess, one time too many.”

Distressed, Trotter’s wife and musical partner, Tanya Blount Trotter, called the police and tried to persuade her husband to hold on. “Michael, I know you have a plan to leave this world,” she told him, “but if you give me just five more minutes to love you, I promise I can make you staying in this world make sense.” Tears in his eyes, Trotter looked up at his wife and said, “OK.”

Trotter, who has since made progress in his therapy for PTSD, eventually turned his wife’s plea into the chorus of “Five More Minutes,” the hard-charging centerpiece of Hearts Town, the new album from the duo, who make music as the War and Treaty. Transforming trauma into catharsis has become the pair’s calling card as they’ve turned into one of Nashville’s most thrilling new acts. In the past two years, Trotter and Blount Trotter have collaborated with Emmylou Harris, toured with Al Green, shared stages with Brandi Carlile and Elvis Costello, and performed at the 2020 Grammys.

“Their music is a joyful force,” says the Indigo Girls’ Emily Saliers, an early admirer. “We can talk about their voices, but it’s really their whole gestalt, their passion. They have a kinetic energy between them that resonates.”

On Hearts Town, the band’s huge leap forward of a second album, the War and Treaty expand on the rootsy textures of their 2018 debut, Healing Tide, incorporating Tony Bennett crooning (“Hey Pretty Moon”), Eighties adult pop (“Liquid Lies”), and radio rock (the Jason Isbell-assisted “Beautiful”). Dark-edged ballads like “Jealousy” and urgent political pleas like “Lonely in My Grief,” meanwhile, offer a more three-dimensional portrait of the joyful salvation the band has become known for.

“We’re not the kumbaya cats that people may want to paint on us,” says Trotter. “We intentionally wanted to focus on healing with Healing Tide, but we might’ve given off the wrong impression in saying that we are the healers.” He’d rather put it this way: “We are the hopeful cats.”

The War and Treaty communicate that urgent hopefulness throughout Hearts Town, a celebration of survival, even, or especially, when it’s messy. Thinking back on his wife’s lifesaving words from three years ago, Trotter smiles. “I am living in that five minutes right now,” he says.

The couple first met on August 28th, 2010, when both artists performed at Maryland’s aptly titled Spirit of Love festival. Michael and Tanya, in their late twenties and thirties at the time, were both Washington, D.C.-area solo artists struggling to find their footing. Tanya had grown up idolizing acts like Jennifer Holliday and Salt-N-Pepa. After singing alongside Lauryn Hill in 1993’s Sister Act 2: Back in the Habit, where she gave a memorable performance of “His Eye Is on the Sparrow,” she went on to have a semi-successful R&B career in the Nineties. She scored a handful of charting singles and signed with Puff Daddy’s Bad Boy Records, but her debut LP for the label never materialized.

Trotter grew up in a strict Christian household in Cleveland, where his mother rigged his radio so that he could hear only secular oldies like Ray Charles and Johnny Cash when the Christian station played them at night. (He remembers an embarrassing moment in middle school when he told his friends about a hot new artist he’d recently discovered: Nat King Cole.) After moving to D.C. with his mother as a teenager, Trotter enlisted in the Army at age 21, in 2003, a few months after the U.S. invaded Iraq. 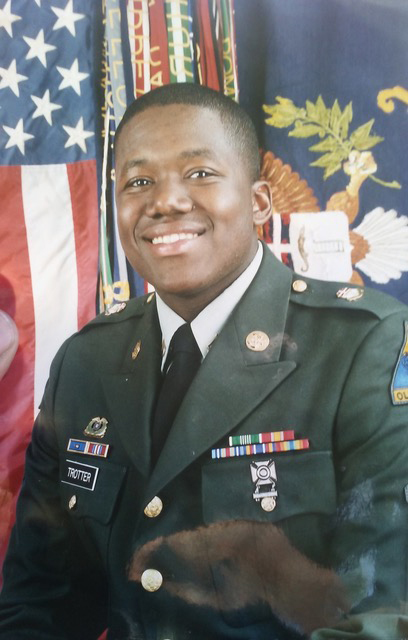 Deployed to Baghdad later that year, Trotter saw the worst of the Iraq War up close, with many of his fellow soldiers in the 6th Infantry Regiment dying in combat. He started to play a piano in one of Saddam Hussein’s abandoned palaces, and eventually moved on to singing tributes that he’d written about his battalion’s fallen soldiers to help his fellow infantrymen cope with their grief and the violence that surrounded them. “I wasn’t interested in songwriting,” he says. “I was interested in ‘How the hell are we going to move on?’ ”

Trotter’s songs, which offered personal, empathetic portraits of fellow service members who’d died brutal deaths, were met with immediate encouragement; he later won a “Military Idol” music competition in Germany. “From that point forward, I dedicated my time and efforts to doing this thing that worked,” he says. “Because war wasn’t working for us. It was working for our country, but it wasn’t working for us.”

Tanya was impressed by Michael’s emotional sensitivity when she saw him perform at the 2010 festival, and the pair began forging their artistic-romantic partnership that very day. “When we met each other, with a lot of our own mishaps and anxieties, there were stories we told each other, and stories we didn’t tell,” Blount Trotter says, “but we knew that it was a safe place to tell it.”

The band manifests that profound honesty on its new album’s title track, an ode to companionship that doubles as a somber expression of inadequacy. “I’m overweight, I have PTSD, and I have nightmares from the war,” Trotter says, discussing the feelings of being undeserving of his wife that inspired the song. “I remember one situation where a nightmare seemed so real that as a grown-ass man with children and a wife, I wet the bed. [There’s] an embarrassment that comes with that: ‘Why would you be here with me?’ ”

Michael and Tanya have spent quarantine in their Tennessee home with their son, and their past few months haven’t been easy. Tanya needed a month to recover after testing positive for the coronavirus in March; more recently, Trotter, haunted by the footage of George Floyd being killed by police, wrote a yet-to-be-recorded song titled “It’s Hard to Breathe.” (He shares some lyrics from the work-in-progress: “Fibromyalgia of these United States uniting against me . . . but I will try to still breathe.”)

It’s a pointed new offering from the group, unlike anything they’ve written before. But they see the song as the latest part of the ongoing story they’re telling with the War and Treaty. “We are working to be this constant testimonial,” Trotter says, “of what can happen when you give yourself a chance to grow.”