Vince Gill has been a loyal, active Grand Ole Opry member for more than one-quarter of the live radio show’s existence. He has also championed young, upcoming artists in much the same way he was supported by his Opry family and others in the industry on his way to becoming one of the most accomplished songwriter-musicians in country music.

On Saturday, Gill celebrated his 25th anniversary on the Opry with an all-star salute/jam session with friends and family, mounting two incredible three-hour shows featuring guests Rodney Crowell, Patty Loveless, Ashley Monroe, Bill Anderson, Andrea Zonn and the Time Jumpers. Gill’s wife, Amy Grant, and one of his daughters, Jenny Gill, also performed and even though his younger daughter Corrina was not in attendance, she did appear among the photos and video clips that were peppered throughout the show to chronicle Gill’s tenure as an Opry fixture.

But it was the musical tributes to the singer-songwriter that highlighted the event, as the guest artists switched places with Gill, handling lead vocals on several of his best-known tunes while Gill took the harmony parts. Backed by a band that included young guitar whiz Charlie Worsham, Gill, in a gray fedora, looked on as his 1991 Opry induction was replayed on the giant video screen. With late Opry icon Roy Acuff standing beside him in the clip, Gill performed his classic, “When I Call Your Name,” as tears welled up in Acuff’s eyes. As if that weren’t tribute enough, Patty Loveless, who sang harmony on Gill’s original hit version, took over the lead on the song. She also handled the vocals on Gill’s heart-touching tribute to his late brother (and also to Keith Whitley), which the singer had dedicated to his mother. The glorious “Go Rest High on That Mountain,” which has since been performed at countless memorial services, proved to be the emotional high point of the entire show as Loveless’s soaring voice reached the Opry House rafters.

Lighter moments were also a part of the celebration, as Gill and Pistol Annies’ member Monroe, who have worked together since he produced her 2013 LP, Like a Rose, teamed for the humorous duet, “You Ain’t Dolly (And You Ain’t Porter),” a tune that Gill noted references a bit of Opry lore with regard to Wagoner in the sheepish line “you’re a whole lot ‘shorter.'” Monroe also performed a delicate and gorgeous version of Gill’s 1994 Number One, “Tryin’ to Get Over You.”

Anderson, who has been an Opry mainstay since 1961, recalled how Gill surprised him by inviting him to write a song with him. When Anderson called Gill’s home he was shocked by the answering-machine message in which Gill, adopting Anderson’s trademark hushed voice greeted callers by saying, “Hello. You’ve reached ‘Whisperin’ Gill.’ Anderson then performed their 1995 collaboration, “Which Bridge to Cross (Which Bridge to Burn).” 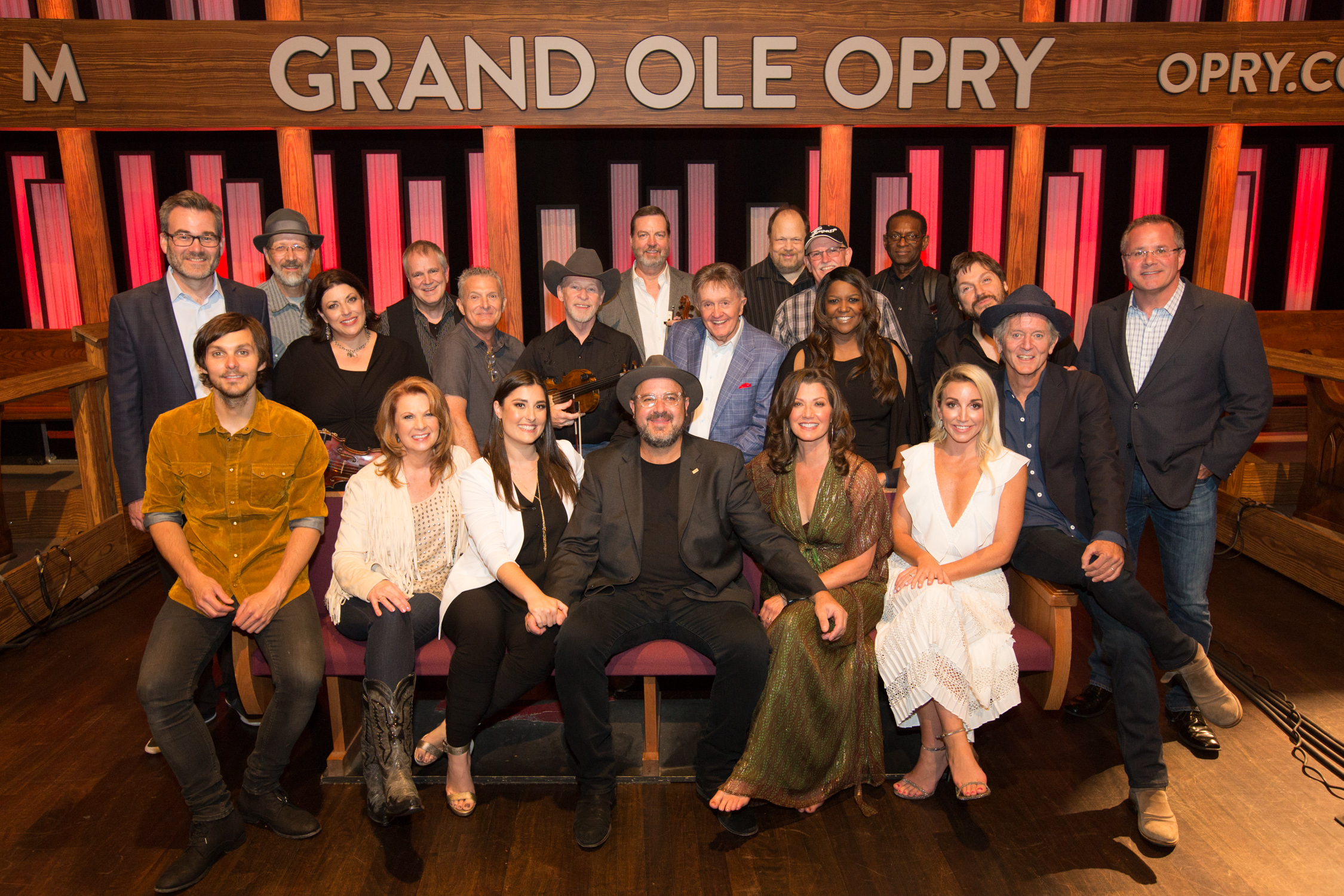 Gill and Crowell, who have been close friends since the late Seventies, shared a story about their earliest encounter when Gill was in a club performing a song written by Crowell, unaware that the writer was among those in the crowd. Crowell then performed Gill’s “Oklahoma Borderline,” and the pair delivered a poignant take on Crowell’s “‘Til I Gain Control Again.”

Fiddle virtuoso and vocalist Andrea Zonn, heard on dozens of Gill’s hits and a longtime member of his band who played the Opry with him in his earliest days, performed a sweet version of the romantic “Look at Us,” with Gill recalling that Zonn had initially turned down an offer to tour with James Taylor to stay in his band. Appreciative of her loyalty, he nonetheless insisted she jump ship and Taylor on the road, which she has done now for more than 13 years. Gill was a guest duet partner on Zonn’s 2015 LP, Rise.

Another of the most affecting performances of the evening was daughter Jenny Gill’s performance of the tune her dad penned with the late Guy Clark, “Jenny Dremed of Trains.” Now in her early 30s, Jenny Gill first sang on her father’s Christmas LP, Let There Be Peace on Earth, when she was 11. Not long after that, Vince met Amy Grant and shared vocals on Grant’s hit, “House of Love,” which they, of course, performed for this special occasion.

The evening was capped off by a lively dose of Western swing from the Time Jumpers, the band Gill sits in most Mondays night for their performances at a Nashville club. The Bob Wills classic, “Corrine, Corrina,” was among the tunes they offered, as Gill acknowledged that his younger daughter (with Grant) was unable to attend this special show. That dovetailed nicely with the legendary story about his own first invitation to play the Opry as a rising country star. He had to decline that invite because Jenny, then in first grade, was performing in a recital. Gill told Opry officials, “Sorry, I’m booked.”

All is obviously forgiven, since Gill was gifted with a special commemorative plaque and also shared a 25th anniversary cake with well-wishers backstage.