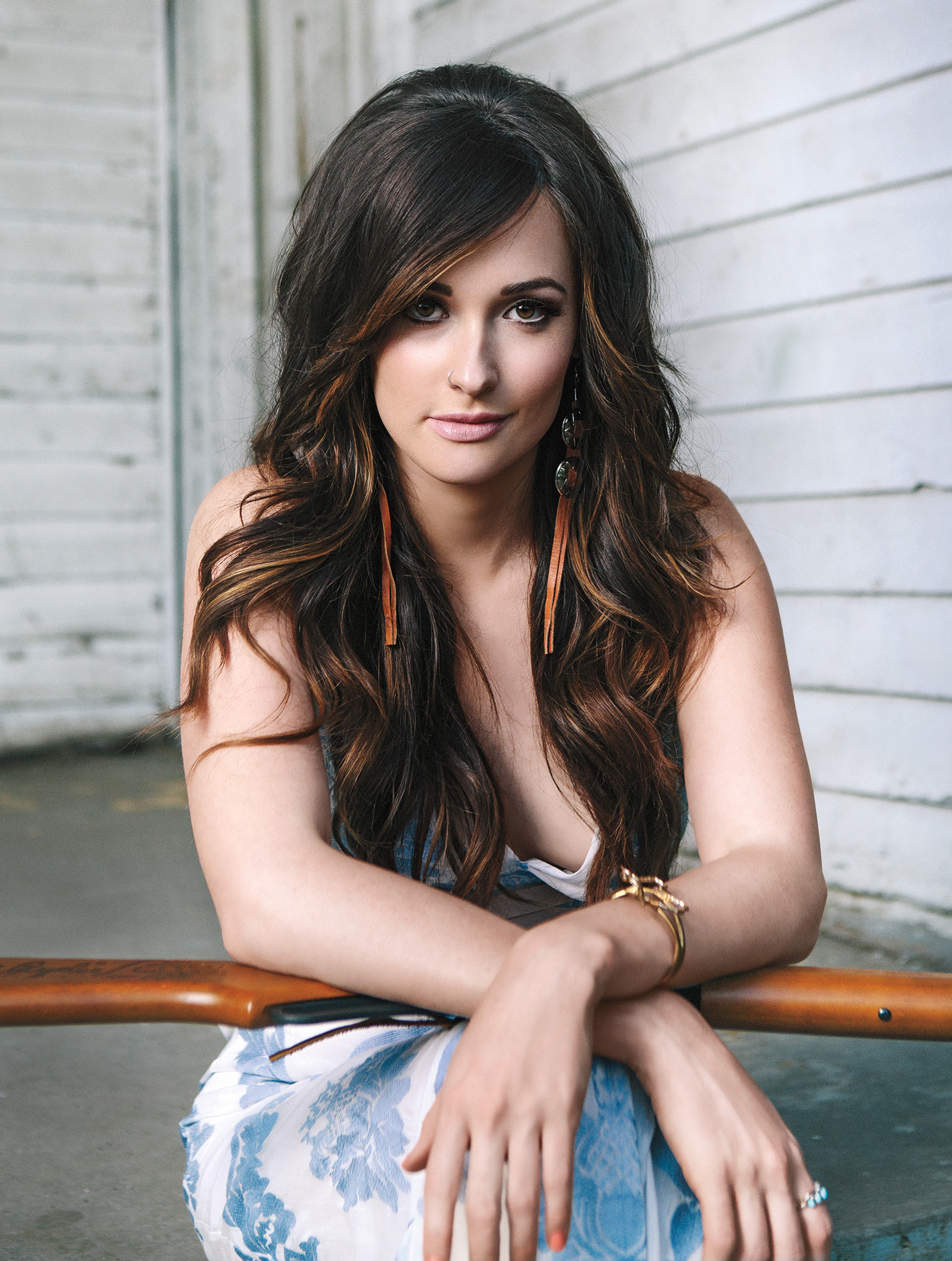 “Do you want anything to drink?” Kacey Musgraves asks one recent afternoon. “I’ve been really into gin and tonics lately.” Still wearing her gym clothes — a white tank top and leggings — Musgraves is giving a tour of her modest two-story home in East Nashville. It’s full of mementos from the past few years, including a signed copy of a Loretta Lynn album and an autographed Rolling Stone from 1978 with Willie Nelson on the cover (it’s signed, mistakenly, “To Katie”). Near the kitchen, a poster reads ‘Believe in your fucking self. Stay up all fucking night.’

When she’s not on the road, Musgraves likes to watch Unbreakable Kimmy Schmidt (“It’s the funniest shit I’ve ever seen,” she says) or hang with her boyfriend, Misa Arriaga, who is also the guitarist in her band. Or she might hit the inflatable hot tub on the porch with her friends. “It’s probably the most redneck decision I’ve ever made,” she says of the tub.

Kacey Musgraves: The Music That Made Me

Right now, Musgraves, 26, is dealing with headaches surrounding her upcoming album, Pageant Material. She says her label wants to push the release date from June to September (“Not gonna happen,” she says). They also take issue with a key line in her single “Biscuits”: “Pissing in my yard ain’t gonna make yours any greener.” The label wants to change “pissing” to “spitting.” “I’m like, ‘Sorry, no,’ ” she says. “People are so worried about offending that they water down everything. Come to a show, and that’s the line everyone loves. Don’t take that away from me!”

Musgraves has been through this before. In 2012, she was discouraged from releasing “Merry Go Round” as her debut single. The song was a bleak portrait of the monotony and heartache of life in small-town America. “I was advised it’s not something that a new artist should say,” she says. “I’m like, ‘That’s exactly why I want to say it!’ ”

Musgraves released “Merry Go Round” anyway, and it went on to win a Grammy for Best Country Song. Musgraves also took home the Best Country Album Grammy that night (for 2013’s Same Trailer  Different Park), beating out Taylor Swift. (“I told you,” Swift mouthed to her friend Ed Sheeran after she lost.) The album earned Musgraves fans ranging from Katy Perry to Willie Nelson, both of whom Musgraves opened for in the same summer. “She’s a huge talent — I’m a big fan,” says Nelson, who eventually learned her name.

With down-home good looks, a Katy Perry-like visual aesthetic — her stage sets feature light-up cowgirl outfits and neon cacti — and a gift for spare, folky melodies, Musgraves has broad appeal. But she also has a rebellious streak that makes her stand out from her peers. Her 2013 single “Follow Your Arrow” playfully championed both weed and same-sex hookups. “I see gay couples at my shows all the time. In the country world, that’s rare, which is sad. But it makes me proud.”

At the Country Music Association Awards last year, she made headlines for appearing to snub Tim Tebow when he reached for a handshake. Also last year, she got into a Twitter feud with country radio DJ Bobby Bones, who called her “rude” after an interview. “It’s so stupid,” Musgraves says. “People want artists to be transparent and real until they do something that is actually real.”

Musgraves grew up in Golden, Texas (pop. 398), an idyllic town that holds a Sweet Potato Festival every October. Her grandmother lived next door, and her parents owned a print shop nearby — her mother, Karen, still makes Western-and-wildlife-themed canvases and pillows. On weekends, the family would hop in a minivan and hit the “Opry Circuit.” Kacey dressed as a cowgirl and sang Patsy Cline and Hank Williams songs with a house band at small theaters like the Greenville Opry or the Mesquite Opry. “She was this yodeling queen in Texas, and she was famous for that,” says friend and fellow songwriter Maren Morris, who met Musgraves as a teenager.

By her early teens, Musgraves had released two locally recorded- albums with songs like “Life of an Old Cowhand” and “Whatever Happened to the Yodelin’ Cowgirls?” “I look back now and I’m like, ‘Oh, my God, that’s so cheesy. I sound like a chipmunk.’ ”

Musgraves went through an emo phase — “I got really into Dashboard Confessional,” she says — before becoming serious about country songwriting around age 15. She was partly inspired by the success of Miranda Lambert, a family friend who grew up in nearby Lindale. “I think Miranda is the reason Kacey decided to go with country,” says John DeFoore, who taught guitar and songwriting to both Lambert and Musgraves.

At 18, Musgraves came to Nashville after making it through an audition for the singing competition Nashville Star. She finished seventh. “I prefer a more organic approach to music,” she says. “Nobody even remembers that I did that, so it’s fine.” Musgraves got a job dressing as cartoon characters for birthday parties but says she quit after she was asked to show up to a party for Blake Shelton dressed as a French maid. “It was very short-lived,” she says.

After playing open mics for a while, Musgraves scored a job as a staff songwriter for Warner Bros./Chappell, where she clocked in weekdays and was paired with one or two co-writers. She became friends with Shane McAnally and Luke Laird, who have written dozens of chart-topping country hits between them. The pair helped her write much of Same Trailer Different Park. “She can write some of the most clever lyrics that I’ve ever heard in Nashville,” says Laird. “There’s always a little twist that makes it not just another country song.”

Pageant Material sounds like little else coming out of Music Row. Instead of slick production and trend-hopping songs, Musgraves aims for the plainspoken poetry of heroes like John Prine and Roger Miller. “[Label executives will say], ‘We need an uptempo for summer, and it needs to be this long.’ It’s like, ‘What happened to just a good song?’ ” she says. “I don’t remember the last time I thought, ‘I would love to hear an uptempo right now.’ ”

Musgraves is already thinking about her next album. “The next one will be completely different,” she says, “because I don’t think this one is very far off from Different Trailer. “I would really like to write to a concept next time. I’d really like to do a reggae record, or a surf-rock record.”

Some critics have wondered if Musgraves could be the next Taylor Swift, bolting country for pop domination. “I like Taylor’s new album, 1989,” Musgraves says. “It’s really fun to listen to when you’re working out. I think it’s great that she’s doing what she wants on her own terms. But she’s way more exposed than I’d ever want to be. That’s not a slight to her. I like my life the way it is.”