Tyler Farr, whose debut album Redneck Crazy spawned two hits, the Top Five title track and its moody follow-up “Whiskey in My Water,” has set April 28th as the release date for his next album. Produced by Jim Catino and Julian King, who were also at Crazy‘s helm, the new LP is titled Suffer in Peace.

The album’s lead single, “A Guy Walks into a Bar,” is already in the Top 20 of Billboard‘s Country Airplay chart. Late last year, to promote the single, Farr opened up about some of his closest drinking buddies, including Jason Aldean, Lee Brice, Jerrod Niemann and Randy Houser. “Some of these stories, I would love to get into detail about, but I would put myself at risk, along with every one of my friends,” Farr told Rolling Stone Country. “TMZ would be parked outside of my house.” 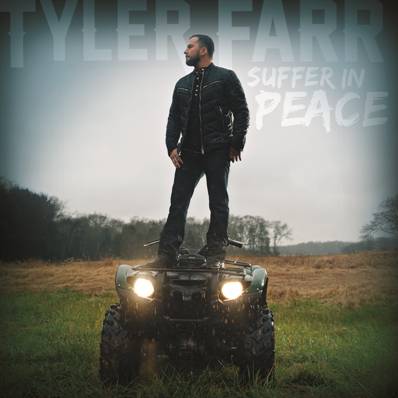 Suffer in Peace‘s introspective title track, however, reveals a yet-unseen side of the Missouri native. Far removed from the swagger and bluster of “Redneck Crazy,” the ballad is about finding seclusion after his lover leaves him. For Farr — or the song’s narrator — that means heading straight to a remote cabin to clear his head, with a bible, a rifle, and a rod and reel in hand. (The album’s cover photo, depicting the singer standing atop an ATV, was taken at his own remote farm.)

Last year, fans who caught Farr on tour with Brantley Gilbert heard select material from the upcoming LP. He’s continuing to road test some of the new tunes as an opening act on Jason Aldean’s Burn It Down Tour, which hit Nashville this past weekend.