Just over a year ago, Tim McGraw released Sundown Heaven Town, his sophomore LP for Big Machine Records. Now, he’s set the date for the follow-up, and has unveiled the title and track listing for what will be his 14th studio album. Damn Country Music, produced by McGraw with longtime collaborator Byron Gallimore, will be available November 6th in standard and deluxe editions, with both available for pre-order now.

“When I recorded ‘Damn Country Music,’ it was one of those electric moments,” McGraw says of the title track. “It speaks to a passion and being at a crossroads in your life when you make that decision to pursue it knowing you might pay a heavy price.”

The first single from the album, “Top of the World,” got an otherworldly send-off last month when McGraw introduced it by beaming the tune to the astronauts aboard the International Space Station. The well-traveled tune is already in the Top 30 at country radio. Also of note are “Here Tonight,” the LP’s lead-off track which features an appearance from McGraw’s oldest daughter, Gracie, and “California,” which includes country hitmakers Big & Rich. 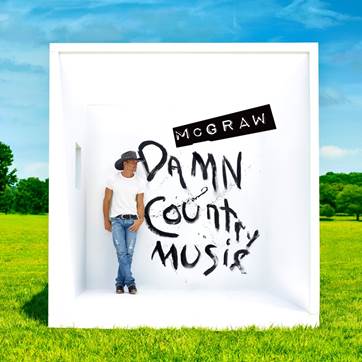 The entertainer’s Shotgun Rider Tour, which kicked off in June, wraps up on September 19th with a sold-out show in Irvine, California. A highlight of the trek is McGraw’s continuing effort to award mortgage-free homes to veterans in more than 30 cities through his partnership with Operation Homefront & Chase. McGraw was also seen on the big screen this summer with his latest acting role in Disney’s Tomorrowland.