On November 7th, Rob Jones showed up to the Borderline Bar & Grill at noon to drop off some flyers for his band’s upcoming gig. Jones performs at the Borderline every few months with his band Highway Starr, a local California country-rock band who consider the Thousand Oaks country bar their hometown venue. But before that Wednesday, he had never really seen the club in the daytime.

“The door was open, so I walked into the club and for two or three minutes I just stood there by myself, no music, no waiters, no bar staff, and I just took it in,” Jones says. “I’m always working there when I play, and it’s at night, so it was nice to just stand in the middle of the room for a second and look around.” Before he left, Jones texted the venue’s entertainment director. “I gotta run,” he wrote. “I’ll see you tonight.”

Eleven hours later, a gunman entered the Borderline Bar & Grill and killed 12 people, the second deadliest of the 300-plus mass shootings that have occurred in 2018.

Jones didn’t end up making it to the venue that evening: his son was in the hospital and he had wanted to spend the night at home with his wife. But Jones, who survived the Route 91 Harvest festival massacre last year in Las Vegas, says he “knows exactly” what the Borderline victims are going through in the days after the attack.

Jones is one of many hundreds of musicians, club owners, music fans, bar patrons, line dancers, and college students in Southern California’s close-knit country music community who are processing yet another wave of unspeakable grief and trauma after a second mass shooting in as many years has claimed members of their own.

More than half of the 22,000 attendees of last year’s Route 91 festival came from California. Ventura County, where the Borderline is located, is home to roughly 800 Route 91 survivors, and six of the 58 men and women who died in the shooting lived in the county. The venue has become one of several country bars in the extended region that has transformed into an unofficial meeting place for survivors of Las Vegas.

Interviews with more than a half-dozen performers, musicians and country music fans who regularly attend the Borderline, many of whom were at Route 91, and all of whom personally knew someone — a brother in-law, a bandmate, a coworker — who had survived the Vegas shooting, paint a portrait of a local venue whose longstanding tightly-woven community had grown even stronger over the past year following the events in Las Vegas.

For many Route 91 survivors, the Borderline became “the home to go reflect upon it and start the healing process,” says Michael Thompson, a frequenter of the bar whose country band the Reckonin was slated to open for Highway Starr the week after the Borderline shooting.

The Borderline, managed by a Vegas survivor named Noel Frawley, immediately established itself as a home for fundraising, grief-processing and communal healing in the days following the 2017 Las Vegas massacre.

“We would love to see everyone come together after experiencing this tragedy together,” read a post on the venue’s Instagram three days after the Route 91 shooting.

In the days that followed, the Borderline organized a full-day benefit concert with nine bands. Dubbed “Country Strong,” the benefit raised thousands of dollars and filled the venue to capacity and beyond, spilling out into a neighboring parking lot filled with food trucks and games.

“It was obviously a very sad occasion, with everyone reflecting on everything that had happened,” says Tina Michelle, who performed at the Borderline’s Country Strong tribute. “But it was really heartwarming as well.”

For Tina Barajas, a nurse living in neighboring Simi Valley who had survived Route 91, attending the benefit concert proved to be a critical step in her healing process. Following the Vegas shooting, Barajas was overcome by survivor guilt for having concentrated primarily on keeping her friend’s niece safe during the shooting.

“I saw a few people shot along the way and I made sure that they were being attended to by other people, but I had such guilt for being a nurse and not going back and helping. It was a really hard feeling,” she says. “Running into a few of my friends at the Borderline [benefit], who had been at Las Vegas, one of them being an EMT, and having them reassure me that I did the right thing and that I had to get my friend’s niece out, that I had children I had to get home to…To be reassured by so many people who were there with me at Route 91, it gave me a sense of healing. It felt like I could move forward.”

Over the past year, Barajas says that the Borderline had become one of the few large public places in which she felt safe. “Whenever I go out, if it’s the grocery store, it’s always in the back of my head, and it’s going to be for the rest of my life,” she says. When she’s gone to the Borderline over the past year, Barajas says she “didn’t have that fear.”

“This is our local family country bar,” she’d think to herself. “We all know each other. It’s Borderline. I take my 14-year-old here. This is my safe place. Nothing is ever going to happen here. Now, that world is shattered.”

“Every time I would go to Borderline, there would be people there wearing Route 91 Survivors shirts, or with Route 91 bumper sticker on their car,” says Lacie Mae, an up-and-coming country singer who frequents the venue. “That was a way to bring people together. You’d just know who was there that had been to Route 91, and other people from Route 91 would go up to them and they’d start to talking. They all had a special bond.”

The Borderline was a focal point for country music fans in the area, “the closest thing to a country bar in 20, 30 miles,” as Jones puts it. In particular, the bar attracted a younger crowd of college-aged students who could dance and listen to music during its weekly 18+ college nights. Most everyone interviewed for this story used the word “family” when describing the atmosphere of the Borderline, a wood-paneled venue with a larger dance floor that featured some version of line-dancing and couples dancing most every night. 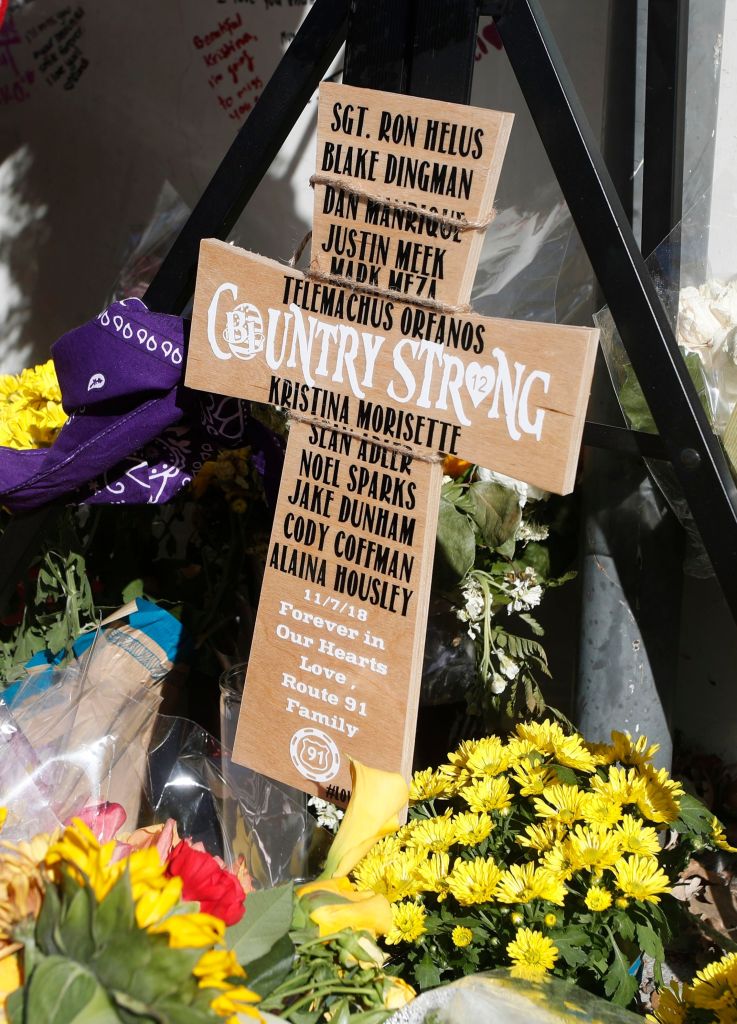 A memorial at the Borderline Bar & Grill in Thousand Oaks bears the names of the shooting victims. (Photo: Mike Nelson/EPA-EFE/REX/Shutterstock)

“The Borderline was an excellent place to get introduced to country music,” says Thompson. Melissa Williams, founder of 58 Strong, a non-profit that assists children who lost parents at Route 91, described the Borderline as “a place for the younger kids who are getting into country and maybe want to join our kind of community.”

Little more than a week after the shooting, the emotional responses of members of the Southern California country “family” range from shock and disbelief to resilience and strength. There is also an underlying fear.

“With everything overlapping in the country community the way it has been, we think that now we feel like we’re a target, says Williams, who survived the Vegas shooting. “We’re on high alert.”

Some, like Tina Barajas, are resolute to return to the Borderline if and when the club eventually is back in business. “As soon as [owner] Bryan opens those doors, we will be there to show our support,” she says.

Others, however, are consumed by worry, after their specific, closely-knit community has suffered two mass shootings in 13 months. “It’s really making a huge impact on us,” says Millena Hicks, whose band Rebel Heart has performed several times at the Borderline. “We typically play every weekend, but right now we’re quieting our gigs down to once a month. We’re just scared.”

“There’s that phrase, ‘You can’t take that away from us,’” says Darren Hicks, who also performs in Rebel Heart. “Well, it feels like they’re almost at the point where they’re actually starting to be able to take something away from us.”