Thomas Rhett was doing his best to keep a handle on his two young daughters and their dogs traveling with him on his tour bus when country’s most pop-forward male artist connected with Rolling Stone Country from the road on Friday. The night before, Rhett kicked off his headlining Life Changes Tour at the BOK Center in Tulsa, Oklahoma, debuting a brand-new stage – created by Justin Timberlake’s set designer – that highlights the flashy brand of Nashville country he’s perfected on his latest album Life Changes.

As he traveled to his next show in Lubbock, Texas, the reigning ACM Male Vocalist of the Year spoke about his “next level” production, his 10-year-plan inspired by Kenny Chesney and how his pal Chris Stapleton gave him the best advice on bridging the gap between country and pop music.

What was it like debuting this new production on tour?
It’s terrifying until you finally get up there. This is the longest we’ve ever rehearsed for a show. We were in [Nashville’s] Bridgestone Arena for two straight weeks rehearsing from 9 a.m. to 7 p.m. every single day. Had a choreographer. Had a music director. The guy that designed our set is a guy named Nick Whitehouse, who designs all the Justin Timberlake sets. He’s been doing our stuff for the past couple years. Every year, me and him are my accountant’s worst nightmare, because we’re always scheming up ways to make the show bigger and larger.

How do you communicate to Timberlake’s designer what you want the show to look like?
I’m a terrible drawer. All I can do is kind of portray to you what’s in my head, and me and Nick have been working together for a few years now, so he understands where my head’s at. He sends a couple renderings, and we’re already good to go. He’s such a great visionary. It’s nice that he came into country music and put his own spin on it. I don’t see anybody else doing what we’ve done this year, production-wise. It’s nice for country audiences to see something a little bit outside the box.

Being influenced by Timberlake, and also being a big Bruno Mars fan, are you busting out full-on dance moves in the show?
We kind of have taken over the Justin Timberlake camp. There’s this [choreographer] named A.J. [Harpold, who works with Timberlake]. We worked together for the first time at the ACM Awards, like, four years ago and every year since then she’s come in. As a band, we try to become more of a unit onstage. I think I got that by watching how Bruno and his band come across as a unit. That’s kind of what [Harpold] is there for. She’s teaching us how to move together, or just teaching me a couple different moves on a song to spice up the song. We sing this song called “Sweetheart,” which is very Fifties-inspired. It’s all classic Fifties two-step dancing on the end of the thrust, and it’s something I think a lot of people are just not expecting. … I think it’s just a well-rounded show. I don’t want to give anybody in the arena the chance to get up and go grab a beer.

You’re going into this weekend’s ACM Awards as the reigning Male Vocalist of the Year, but it seems like you’re on track to get an Entertainer of the Year nomination in the not-too-distant future. Is that on your radar with this new tour?
Yeah. It’s really normal in the pop and hip-hop world to rehearse for five or six months, because there is so much choreography and there’s so much production. I think it weirds people [in Nashville] out when you tell them that you’ve been in rehearsal for two weeks. For me, the goal is to win Entertainer of the Year, and the only way to do that is to make your show above and beyond anything else that’s out there. While understanding that what we do is super-unconventional for this genre, we’re trying to make the most fun show humanly possible, whatever that looks like. For us, that means rehearsing for a long time.

Aside from the Entertainer of the Year goal, how do you see your career growing? Who are the artists you look to for inspiration on how to stay engaged with fans over the long haul?
Hopefully, in 10 years we’re still doing this and hopefully it’s on a stadium level. I think what Kenny [Chesney] has done so well is not only does he have great music, but he’s created such an atmosphere that even if you only like a couple of Kenny Chesney songs, you’re still going to that show because you’re going to feel like you’ve escaped reality for three or four hours. I think that’s what Chesney and people like Luke Bryan and Jason Aldean have all done so well. Even though their music is all super different, those fans have been with them since seven or eight years ago. They keep coming back because they know that a Luke Bryan concert is going to be a blast and they know that a Jason Aldean concert is going to be a blast of a rock & roll concert. They know that Kenny Chesney’s gonna be like they got to go to Mexico for a day. When you can create those really cool atmospheres and vibes, I think you have a really great future.

You mention Jason Aldean and Luke Bryan. You’re all friends, but is there any competition among you, as you’re all playing a lot of the same venues throughout the year?
I think if there wasn’t any competition, then no one would ever try to step their game up. I remember in 2013, I was opening for Aldean and then knowing that we were going to go on the [Florida Georgia Line] tour the next year. I watched [FGL’s] Brian and Tyler really invest a bunch of their money in making their show next level. Even if it cost them bringing out an extra bus or whatever, they were using that money to spend it on freakin’ pyro and fireworks and cryo-canons – all that little stuff adds up to a really unique, fantastic experience.

I watch everybody. I’m constantly looking at, “What’s Kelsea Ballerini’s set look like? What are these new artists like Devin Dawson and Brett Young – what are they doing to be different to set themselves apart?” Then you’re looking at the superstars, like, Luke’s doing stadiums now. How is he taking it to the next level?

But I do think it’s healthy to have a friendly competition rather than a competition that just keeps you up at night resenting somebody else for doing better than yourself. I think you’ve got to take what people do and learn from it and expand upon it. Take parts of what you love from other artists and make it unique to your brand. I think that’s what all the great bands have done in the past – the Stones, the Beatles were all looking at Muddy Waters, and then [other stars at] Prince and Michael Jackson going, “Dang, he’s got a what on his stage? We’ve got to do something bigger and better than that.” The competition is really what fuels the fire to make your show great. 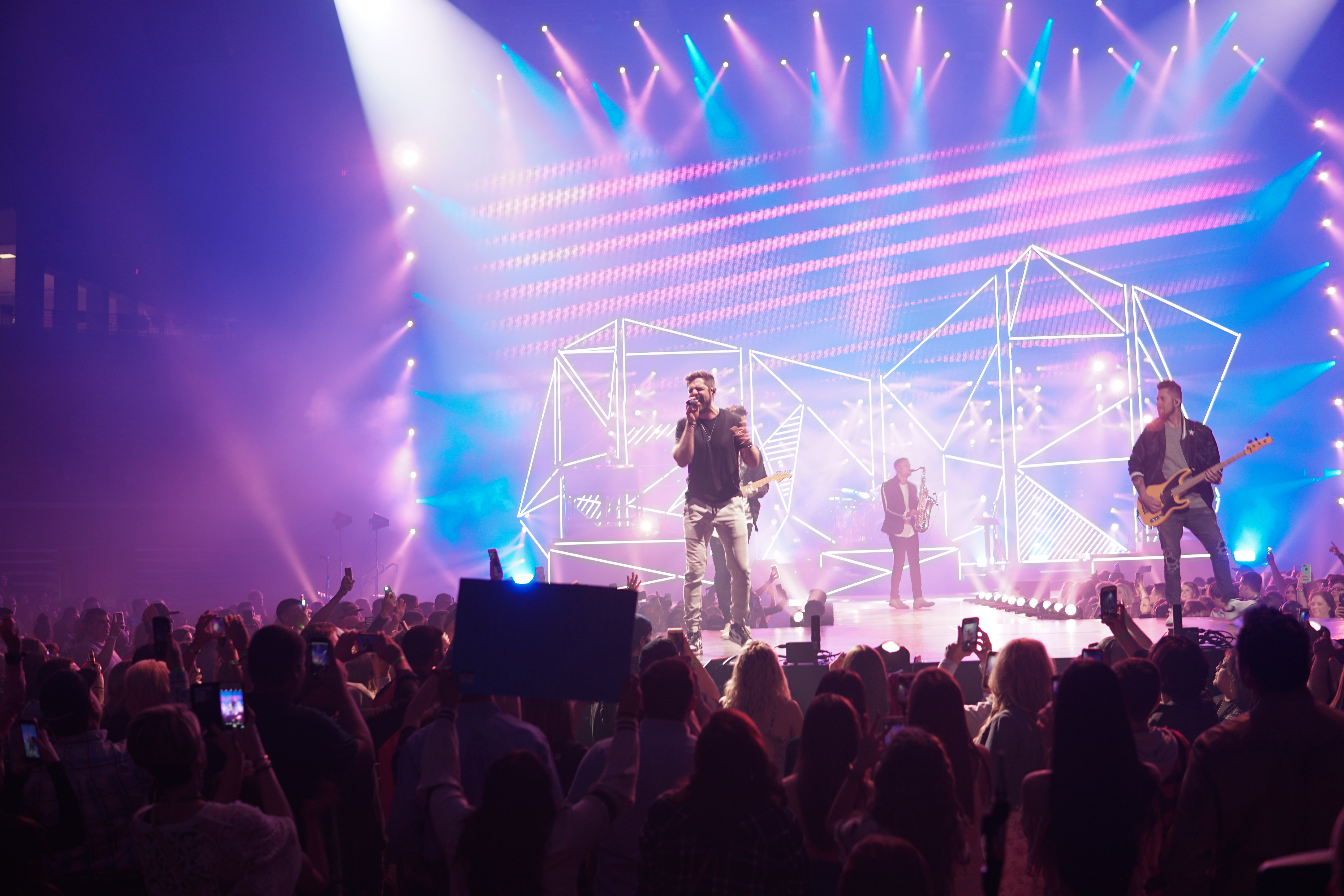 You’ve mentioned your 10-year plan. Is scoring a pop hit part of that plan? Right now, your “Craving You” singing partner Maren Morris is having a huge pop hit with Zedd on “The Middle.”
I wrote with Stapleton two weeks ago for the first time since, like, 2013.

Before he became “Chris Stapleton.”
Yeah, that was a long time ago. We’re still great friends, but we used to be really close. He used to come on the road with me and write. He used to open for us. It sounds crazy to say that now. But we were writing, and we were talking about that exact question. He said it so well. He said, “I think as long as you remain [true] to your roots and you become a guest in other genres, then it feels organic. But if you’re trying to do the thing where you’re like, ‘Hey, I’m not going to be a country artist anymore. I’m just going to go make pop records,’ I think that doesn’t come across to people well.”

So him doing the Timberlake thing [“Say Something”], he was a guest in Timberlake’s world. That’s how he described it. I thought that was a great way to put it. If a Zedd or a Martin Garrix or somebody comes into my world and is like, “Hey, we’d love for you to do the top line on this song,” then I’m a guest in that genre, but still doing what I do.

I think it would be really cool. Having that pop hit for Maren, that catapulted her career in ways that are unimaginable. I think as long as it stays organic and true to who you are, I think you can really do no wrong.