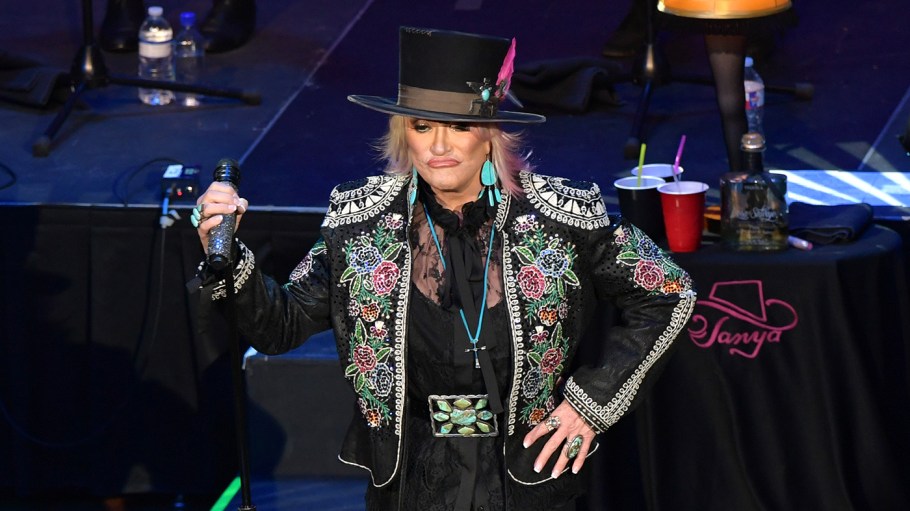 View Gallery
11 photos
Tanya Tucker was a mesmerizing entertainer at the Ryman Auditorium in Nashville, performing hits from throughout her career with guests like Margo Price and Billy Ray Cyrus. Getty Images

Tanya Tucker remains the “female Elvis,” a moniker she earned from the King himself more than 40 years ago. For nearly two hours during her “Tanya Tucker & Friends” show on Sunday night, the charismatic entertainer karate-chopped, high-kicked, and hip-thrusted her way across the stage at Nashville’s Ryman Auditorium, delivering both songs she transformed into indelible hits when she was just a teenager and material off her Grammy-nominated album While I’m Livin’. It was a scenery gobbling performance, but a master class in how to inject actual spontaneity into a country music concert.

At various points throughout the show, Tucker, 61 and in remarkable voice, plucked an infant from the audience and held it in one arm while she sang into a mic in the other; obliged a fan who wanted to down a shot of tequila (Tucker poured); and, during a Billy Ray Cyrus cameo, tried her hand, twice, at the rap portion of “Old Town Road.” That song was mostly lost on the sold-out, older-skewing crowd, but Tucker didn’t mind. She was there to entertain herself just as much as the fans, reveling in her own one-liners, limber dance moves, and a parade of special guests, many of whom just wandered onstage, unannounced, mid-song.

Cyrus, Jamey Johnson, Margo Price, Lee Ann Womack, and the actor-singer Dennis Quaid all made appearances, along with two Texas legends: the criminally overlooked Johnny Rodriguez and the outlaw songwriter Billy Joe Shaver. Rodriguez joined Tucker on “Game I Can’t Win,” a song written by Quaid, while Shaver (who, when asked how he was doing prior to the show, exclaimed, “I’m gonna make it!”) duetted on his “I’m Just an Old Chunk of Coal (But I’m Gonna Be a Diamond Someday).”

While many of the guests sang Tucker songs — Price on “Love Me Like You Used To,” Womack on “High Ridin’ Heroes,” the stoic Johnson on “Don’t Believe My Heart Can Stand Another You” — Cyrus offered his 1992 signature “Achy Breaky Heart,” the perfect vehicle for Tucker to shimmy, sashay, and offer yet one more hip thrust. Dressed in black pants with calf-length fringe, a sheer top, and turquoise jewelry everywhere, she made it impossible to look away for too long, even at her ace band or at any of the A-list guests.

Some of that was due to simply not knowing what she’d do or say next. Calling for a stool for a solo rendition of her gorgeous time’s a-wastin’ ballad “Bring My Flowers Now,” she worried about the elasticity of her skin-tight pants and promptly blessed herself before sitting down. When she gave an unanswered shout-out to her boyfriend Craig in the wings, she quipped that he was probably “commiserating with Margo” and warned that if any woman wanted her man, she’d drive him to their house herself.

While early hits like a set-opening “Would You Lay With Me (In a Field of Stone)” and the 1975 chart-toppers “Lizzie and the Rainman” and “San Antonio Stroll” highlighted Tucker the nostalgist, it was the songs off While I’m Livin’, performed as their own six-song mini-set, that proved her urgent relevance. “I Don’t Owe You Anything” became an even ballsier, saltier kiss-off played live, and “Hard Luck,” a gem of a song by forgotten Texas band Josefus that co-producer Shooter Jennings brought to While I’m Livin’, showcased Tucker the vital rocker.

By the time the concert reached the penultimate number, “Two Sparrows in a Hurricane,” Tucker, who headlines CMT’s Next Women of Country Tour, was almost hoarse but clearly not in a rush to cross the finish line. She delayed the start of the inevitable closer “Delta Dawn” by sending up an endless list of names, from her champions and producers Jennings and Brandi Carlile to her surprise guests and friends in the house (“Shirley, I love you!”). It was a thank-you speech long in the making, and with the Grammys just two weeks away, maybe good practice, too.