It’s been seven years since Damien Echols walked out of an Arkansas prison after spending 18 years — half of his life at the time — on death row for a crime he did not commit. Now, at 43, the West Memphis Three figure (one of a trio of teenagers railroaded to convictions with no physical evidence for a shocking 1993 triple child killing during the days of satanic panic in the buckle of the bible belt) writes bestselling books, makes art, speaks as an advocate for criminal justice reform, travels the country teaching magick, and hangs out with friends like alt-country star Sturgill Simpson.

Echols tapped Simpson to interview him at an event promoting High Magick: A Guide to the Spiritual Practices That Saved My Life on Death Row, the author’s third memoir in five years. The discussion, held last week at Unity of Nashville, a church on the outskirts of Music City, was part of the Nashville Public Library’s Salon@615 series. (Echols will sit for two more conversations in the coming days: one with the Dixie Chicks’ Natalie Maines in L.A. on November 15th; another with Eddie Vedder in Seattle on November 19th.)

“I would say roughly 99 percent of the people on this planet, if they had to endure your life experience, most of us 1) would not have survived, and 2) would not have [come out of it] with your outlook on the world and life in general, [which] has been pretty inspiring and humbling, just for me as an individual,” Simpson told Echols, who explained how he used mediation and magick to flush from his soul the anger, pain and bitterness over being a victim of gross injustice. As defined in Echols’ book, magick is “an amalgam of Gnostic Christianity, esoteric Judaism, Taoist energy practices, and often forms of divination such as the Tarot or the I Ching. … Spelled with a k to differentiate it from parlor tricks and illusions you see on the stage.”

“You are invoking elemental, astrological and planetary energies into yourself, into your energy system, over and over and over, sometimes for hours a day,” the author said of the magickal practices he credits with saving his life, while distinguishing them from the dark arts and occultist negative connotations of the word’s traditional spelling that Arkansas prosecutors used to persecute him in a kangaroo court nearly 25 years ago.

A true inspiration, Echols emerged from that abject experience and the 18 years of solitary confinement that followed with the core of his identity intact. He talks about magick with the wide-eyed enthusiasm of a boundlessly curious teenager, not the thousand-yard stare of a person unpacking decades of post-traumatic stress. Over the course of an at-times-lighthearted, at-times-intense nearly two-hour dynamic discussion, Echols and Simpson picked each other’s brains on sapient topics ranging from life after prison, reconciling social anxiety with celebrity, and spiritual and psychedelic experiences.

Here are eight things we learned from the heady Q&A:

Simpson didn’t ask Echols about his experience when he first met him.
Unlike many people who encounter Echols, Simpson didn’t bombard him with questions about the West Memphis Three saga. “I knew that was the last thing I wanted to talk about,” the singer said. “I wonder, how hard was that, when you’re just trying to move on and find a way forward, and then everyone around you is obsessed with talking about the past?”

“I had two nervous breakdowns after I got out of prison,” Echols recalled of having to constantly talk about and relive his trauma in the aftermath of his release, a period when he recalls doing up to 18 interviews a day while on the road promoting documentaries and books about the case. “It gets to the point where you think, ‘Why did we get out, if all we’re thinking about is prison and this case all the time?’”

Echols is the common denominator between the Bible and The Matrix.
Echols responded with a curveball when Simpson asked him to explain the relationship between magick and energy. “My two favorite things for teaching people anything to do with magick [are] the Bible — I think it is the greatest book on magick ever written,” he said. “The other thing would be The Matrix, as bizarre as that sounds.” Echols cited the 1999 sci-fi blockbuster’s iconic scene where an enlightened young boy appears to be bending metal spoons with his mind. “Don’t try and bend the spoon, that would be impossible,” he said, paraphrasing. “Just realize there is no spoon.”

You can thank Led Zeppelin for Sturgill Simpson.
“I didn’t discover magick in a [tabloid] magazine when I seven [as Echols had described], but I had an older cousin that played me Led Zeppelin records,” Simpson offered at one point to laughs. “I’m pretty sure the sudden realization of like, ‘This is the only thing I care about and wanted to do with my life’ was pretty instantaneous. … My life was ruined!”

Music is pretty magickal.
Next time you go to a Simpson concert, watch for the rare, brief moment when the singer’s feet leave the metaphorical ground. “I’m fortunate enough to play with some pretty amazing musicians, but maybe once in a week of shows there might be that 30 to 40 seconds when you feel like you’re actually levitating onstage,” Simpson said. “[If I can] get that twice or three times in an entire tour, I feel like I’m getting back what I was putting into it.”

Echols believes he willed himself from death row.
Echols offered a confident “I do” when Simpson asked if he believes he manifested his own release from prison. While he doesn’t take credit away from the attorneys and supporters who successfully fought for him, the author believes the confluence of factors that led to his release wouldn’t have aligned had he and wife Lorri Davis, whom he married while incarcerated, not adopted a mantra. It went: “May I be home, free from prison, living happily with Lorri. Let it by a way that brings harm to none, is for the good of all, and in no way lets us reverse or bring on another curse.”

DMT really did change the way Simpson sees.
“Marijuana, LSD, psilocybin and DMT / They all changed the way I see,” Simpson sang of experimenting with psychedelics on 2014’s “Turtles All the Way Down.” His trip happened five years ago, following a conversation with a friend who was grieving the loss of his father. “I was trying to comfort him and just said to him, ‘In some religions they believe [there’s] this infinite realm of energy, where it’s just this pure ocean of love and bliss and it just goes on forever, and that’s where [your father is] probably at now,'” Simpson said. “And he said, ‘That sounds a lot like DMT.’ I said, ‘What’s DMT?’ And he showed me.”

“Not a single day of my life goes by that I [haven’t] at least stopped at some point in the day and thought about whatever that was,” Simpson said of the mind-expanding experience. “I just know that outside of maybe skydiving into a gunfight with a great white shark strapped to my chest, [I can’t imagine] anything more intense or traumatic and horrifying and beautiful at the same time.” 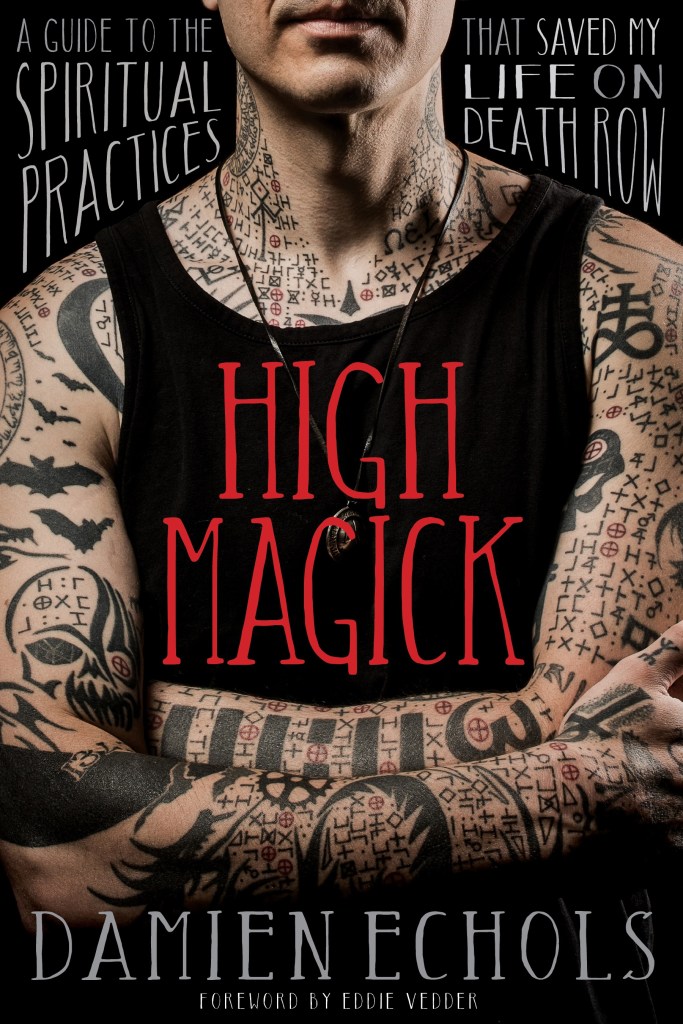 Simpson’s Kentucky childhood included evangelical snake-handlers.
Simpson’s great uncle Noah was a Pentecostal preacher in Jackson, Kentucky. He recalled how his grandmother took him and his cousins to church when he was young, and how he witnessed the local townspeople handling rattlesnakes and speaking in tongues. “The snakes would literally go limp like rope in their hands,” Simpson said. “And then supposedly, if your faith was strong enough, if you believed enough that God would protect you, like, he wouldn’t let these serpents harm you.”

As introverts, Echols and Simpson both struggle with social anxiety and celebrity.
Simpson was curious to know how Echols, given his experience in solitary confinement, handles living in New York or being in big crowds like at Bonnaroo — where he watched Simpson perform this past summer.

“People will come up to me and they’ll talk to me, and I’m smiling and it seems like we’re having this interaction and I’m engaged,” said Echols. “And people are like, ‘Oh yeah, he was really in tune to what I was saying.’ When that person walks away from me, I couldn’t tell you one single thing they said to me, because I go on autopilot, and I’m doing everything I can to keep my shit together.”

“I can’t do it,” Simpson replied. “When I try [the anxiety] is just indescribable. … That many people throwing compliments at you, and if you’re not in a place where it’s comfortable for you to accept that, the only way I can describe it is I feel exhausted and depressed. And you can’t say that out loud because it sounds ungrateful.”