Dallas Davidson has written or co-written hundreds of songs that have landed on dozens of albums by Nashville’s top artists, from traditionalists like Jamey Johnson to ultra-mainstream best friend Luke Bryan. Close to 50 percent of those cuts have been picked as singles; many, many of those have been hits; and 22 in particular have gone all the way to Number One, including “That’s My Kind of Night” and “Country Girl (Shake It for Me)” for Bryan, “Boys ‘Round Here” for Blake Shelton, and “Runnin’ Outta Moonlight” for Randy Houser.

But the song the Georgia native most identifies with at the moment is one he didn’t even write — “Mr. Misunderstood” by Eric Church.

“Absolutely, I’m misunderstood,” says Davidson emphatically, noting he cranks up the tune whenever he hears it on the radio. “I think people have an assumption about me that I’m all about commercial, and I can say, I’m naturally commercial.  I don’t try to do that, it just comes out that way.”

Songs like the aforementioned hits and others, including Bryan’s current chart-climber “Huntin’, Fishin’ and Lovin’ Everyday,” which feature lyrics about rural life, come naturally to Davidson and his co-writers the way opining about love does to other songwriters.

Davidson, a late bloomer who didn’t pick up a guitar until 24 and came to Nashville in 2004, two years after his hometown buddy Bryan, believes being pigeon-holed by the sound of his hits as opposed to judged for the breadth of his catalog is not an anomaly. “I think most songwriters are misunderstood, I’m not singling myself out. The ones that are making money — if I’m being honest — we’re all misunderstood because people hate on you, that’s just the nature of the beast. It doesn’t matter if I sold real estate” — which Davidson used to do. “If you’re on top of your game,” he says, “people are going to hate on you.”

Indeed, everyone loves to pick on the Peach Picker — the name of his songwriting trio with fellow Georgians Rhett Akins and Ben Hayslip. But Davidson has made peace with people criticizing the sometimes formulaic quality of his hit songs or saying things like he’s “ruining country music.”

“If I worried about that, I might as well go dive off the Flint River Bridge because I hear that shit every day,” he says.

The burly tunesmith and sometime performer admits that he wasn’t always so Zen about the flack he received, or the fact that he could co-write a song like “Honky Tonk Badonkadonk” with Johnson and Houser but only his credibility seemed to take a hit for it with the purists.

“I can honestly say I used to let it bother me,” Davidson says, noting it was particularly galling that he felt his critics never sought out the songs that might give him more credibility as a writer in their eyes — the album cuts or singles that are worlds away from his bro-country hit list. “They don’t want to hear the stuff they would actually appreciate,” he adds, listing “I Don’t Dance” by Lee Brice, “Just a Kiss” by Lady Antebellum, “If Heaven Wasn’t So Far Away” by Justin Moore, and “Touchdown Jesus” by Tim McGraw as among the more substantive. “People forget all about that stuff, quickly.” 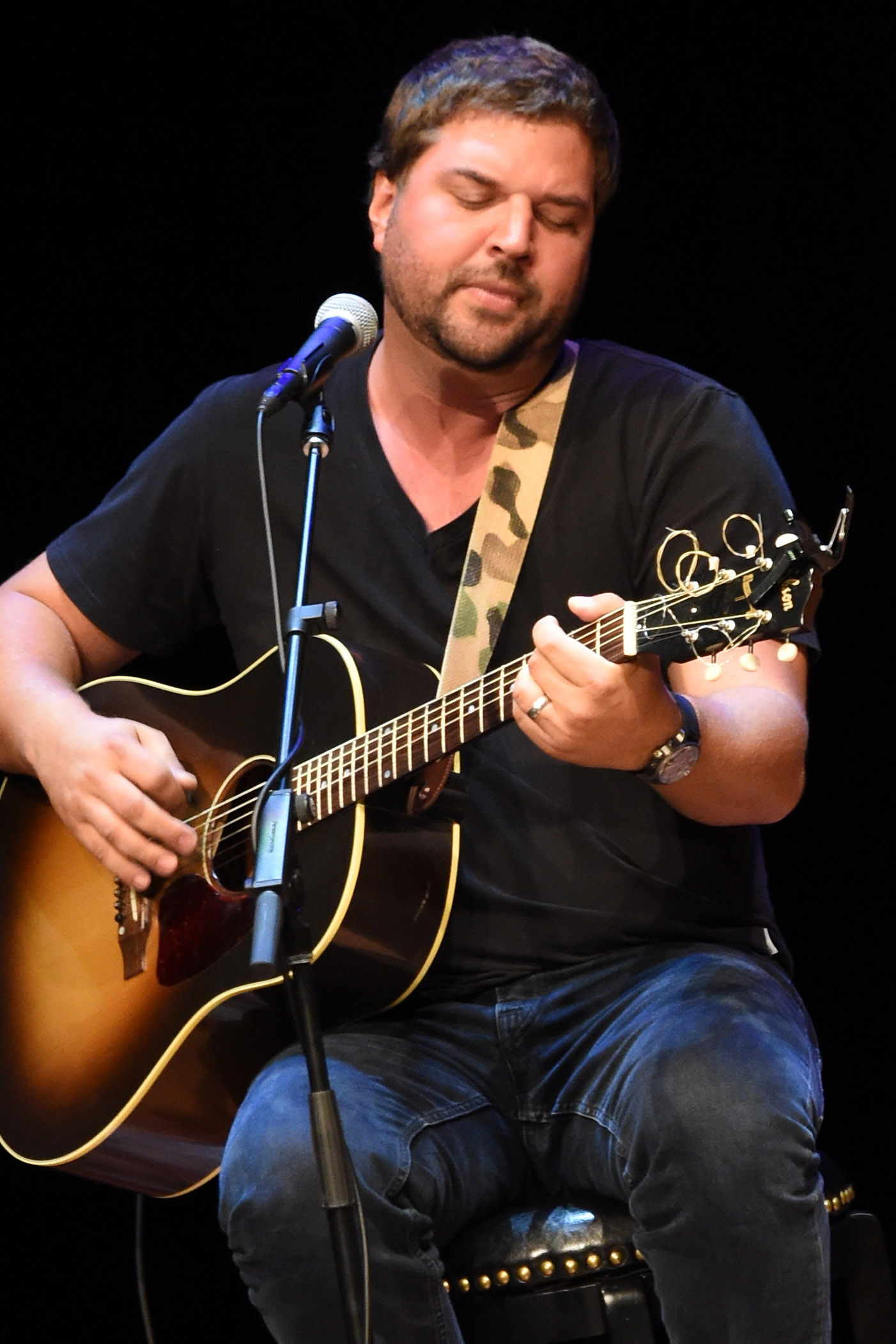 When two lesser-known Frankie Ballard tracks — “Sober Me Up” and “Tell Me You Get Lonely” — are mentioned as evidence that Davidson isn’t strictly about tailgates and dirt roads, he agrees. “They’re a little grittier and more representative of who I am if I was to be an artist, but they’re not commercial. I don’t make money off of those songs unfortunately. I’ve got to write ‘Country Girl (Shake It for Me)’ if I’m going to get paid,” he says.

The big pile of money he has made surely helps soften any critical blows, but on that financial point he only laughs and offers, “I have no comment on that.” Davidson says that he understands all of his songs may not be for everyone, but is glad that they have reached an appreciative audience.

“He’s a big reason I moved to town,” says Cole Swindell, who hails from the same part of Georgia as Davidson and Bryan. “I remember being with him the night before he moved and thinking, ‘This guy is crazy, he’s moving to Nashville.’ And then look what he did. He works so hard, and he’s a fun person to be around. Whether it’s a serious song or a fun song, all of his songs make you feel something.”

If Davidson believes he was misunderstood previously, he’s about to further complicate his image with “Country Boy Swagger,” his forthcoming release as a performing artist. It will either be an EP or full album, out later this year, that collects the collaborative songs that Davidson recorded with a group of hip-hop artists last fall, including Mannie Fresh, Mystikal and Big Boi. The Outkast member appears on Davidson’s upcoming single “Laid Back,” out Friday. The piano and beat-heavy track sounds like a bizarre but catchy mash-up of Bruce Hornsby and Uncle Kracker, features Davidson and Maggie Rose on vocals, and a provocative rap interlude from Big Boi.

“I know, right, what am I doing?” asks Davidson, chuckling about the always polarizing concept of combining country and hip-hop. But for the love-him-or-hate-him songwriter, creativity is all about doing what he wants — without worrying about who understands.

We asked Davidson to reflect on some of his songs, from Bryan’s new single to the notorious “Badonkadonk.”

“Huntin’, Fishin’ and Lovin’ Everyday,” Luke Bryan
(Written with Luke Bryan, Rhett Akins and Ben Hayslip during Bryan’s recent Farm Tour. Davidson appears in the song’s video.)
“The Peach Pickers is Rhett, Ben and myself. When Luke joins us we’re called the Peanut Pickers because Luke’s daddy was a peanut farmer,” says Davidson. “I can say that this is my favorite song I have ever written, 100 percent, because it really reflects my life. I’m at my farm right now, it’s turkey season and I’ve got two of my buddies from Georgia here and this is the ninth year we’ve done it and we’ve turkey hunted all day today. When I’m not working writing, I am in the woods. To write a song that nails who me and Luke are, when I hear it on the radio I’m like, ‘Hell, yeah!’ I never thought it was going to be a single; I thought it would get shoved in the back because it’s called ‘Huntin’ and Fishin” and not everybody’s okay with that. But they put it out and I’m so glad. It’s not about hunting and fishing — it’s just about enjoying your life.”

“Honky Tonk Bandonkadonk,” Trace Adkins
(Written with Jamey Johnson and Randy Houser)
“I think I met him the third day I moved to Nashville,” says Davidson of next-door neighbor and future brother-in-law Houser, his co-writer on “Badonkadonk,” Davidson’s breakthrough hit. “That song was born at the Wildhorse Saloon. Rob Hatch, our good buddy, was a bartender at the time and we didn’t have any money so we’d go there and he’d give us free drinks. We were on the third floor and there was a line dance going down on the bottom floor and there was this one girl who was very noticeable and Randy said, ‘Man, that’s a honky-tonk bandonkadonk!’ A couple months later we finally got together to write it. I don’t care how silly that song is, there was some redneck poetry in there. Just because it’s a novelty song doesn’t mean it doesn’t resonate with people.”

“I Don’t Dance,” Lee Brice (Written with Lee Brice and Rob Hatch)
“Lee and Rob Hatch came over and we were in the pool chilling, and Lee grabbed my guitar and started playing that little groove,” says Davidson of the CMA-nominated song. “I had that title in my phone and I threw it out. Lee was about to get married and good ol’ Southern boys, we don’t dance, we’re too cool for that. Or clumsy. So that’s how that was born and it became his wedding song. That’s one I was really proud of.”

“Play It Again,” Luke Bryan
(Written with Ashley Gorley)
“I love writing with Ashley because he does this and I do that and then we get to the best melody and blend it. That was just Ashley playing piano, which is what we always do — I set my guitar down and let him play piano because it’s fresh and inspiring melodically and it seems like lyrics fly out of my mouth and his mouth especially. We just started making something out of thin air,” says Davidson. “And then the lines, ‘She was sittin’ all alone over on the tailgate / tan legs swingin’ by a Georgia plate.’ I’m from Georgia so when I write a lyric like that, immediately Luke can latch onto it. So do I write with him in mind? Kind of. . . But I think it needs to be more natural than ‘trying to write a Luke Bryan’ song.'”

“That’s My Kind of Night,” Luke Bryan
(Written with Ashley Gorley and Chris DeStefano)
Reviled by some but hugely successful, this song was straightforward in its inspiration: This is how we like to have fun. “Yeah, pretty simple, right?” says Davidson. “I just wanted to write a song about that. We were trying to write something fresher than what people had already heard on the radio. And with DeStefano playing those crazy licks, it perked me up and made me want to bring my A-game that day. That song could be called ‘bro-country,’ but if you listen to that lyric, that song is country as pig shit.”

“Country Girl (Shake It for Me),” Luke Bryan
(Written with Bryan)
“That’s Luke watching his crowd and watching those girls out there shaking it,” says Davidson. “Golly, we wrote that thing a long time ago. That was all Luke’s groove. I do remember that I had to talk him into playing it for [the record company.] I said, ‘Please play it, it’s a hit.’ And the rest is history.”

“Sober Me Up” and “Tell Me You Get Lonely,” Frankie Ballard
(Written with Ashley Gorley and Marty Dodson respectively)
“Frankie cut some of my favorite songs. I didn’t even realize this until now,” says Davidson. “Unfortunately, when you write a song you’re proud of it doesn’t typically get much attention with radio. But when Frankie cut [“Sober Me Up”], that was a big deal. Even though he was a new guy, he got it. He had probably been there. And ‘Tell Me You Get Lonely’ had a grit to it. It was a man being a little vulnerable. We tried to be a little more honest in that song and wear our heart on our sleeve that day. Those songs you’re proud of them, they just don’t make any money. But that’s not why we write songs. We write songs to get to those good ones that we can latch onto and hopefully change somebody’s day or life.”