A lot has changed in the worlds of pop and country since Shania Twain last released an album (2002’s Up!) and last went out on tour. In that time, she’s witnessed the rise of crossover stars such as Taylor Swift and Carrie Underwood, as well as the chart-topping reigns of Miley Cyrus and Rihanna. Although she hasn’t been resting on her laurels, thanks to a two-year residency at Caesar’s Palace in Las Vegas, it’s a wonder Twain waited until now to step back onstage and remind the rest of the world what she’s capable of.

If any of that was weighing on Twain’s mind when she took the stage at Key Arena in Seattle, Washington, Friday night to kick off her first U.S. tour in 11 years, the 49-year-old superstar sure didn’t let it show. In fact, the closest she came to acknowledging the female pop powerhouses of today was the Beyoncé-like bedazzled bodysuit she wore as she closed out the nearly two-hour show with a fierce version of her 1999 classic, “Man! I Feel Like a Woman!”

Outside of that wardrobe choice, the newly blonde Twain didn’t attempt to use this nationwide tour as a way to compete with the pop and country stars of today. Rather, she stayed true to herself, strutting around the stage confidently in a variety of other body hugging outfits and managing to appear humble amid the meticulously planned spectacle.

Everything else about the show was set up to live up to the tour’s name, Rock This Country. Twain’s sturdy, seven-piece band was decked out in all black attire, with an emphasis on leather. And during the superstar’s costume changes, the ensemble showed off their voluminous chops, rousing the crowd with bombastic guitar shredding instrumentals. The staging of the nearly two-hour set was pure arena rock overkill, with lots of pyrotechnics and a colorful laser light show. 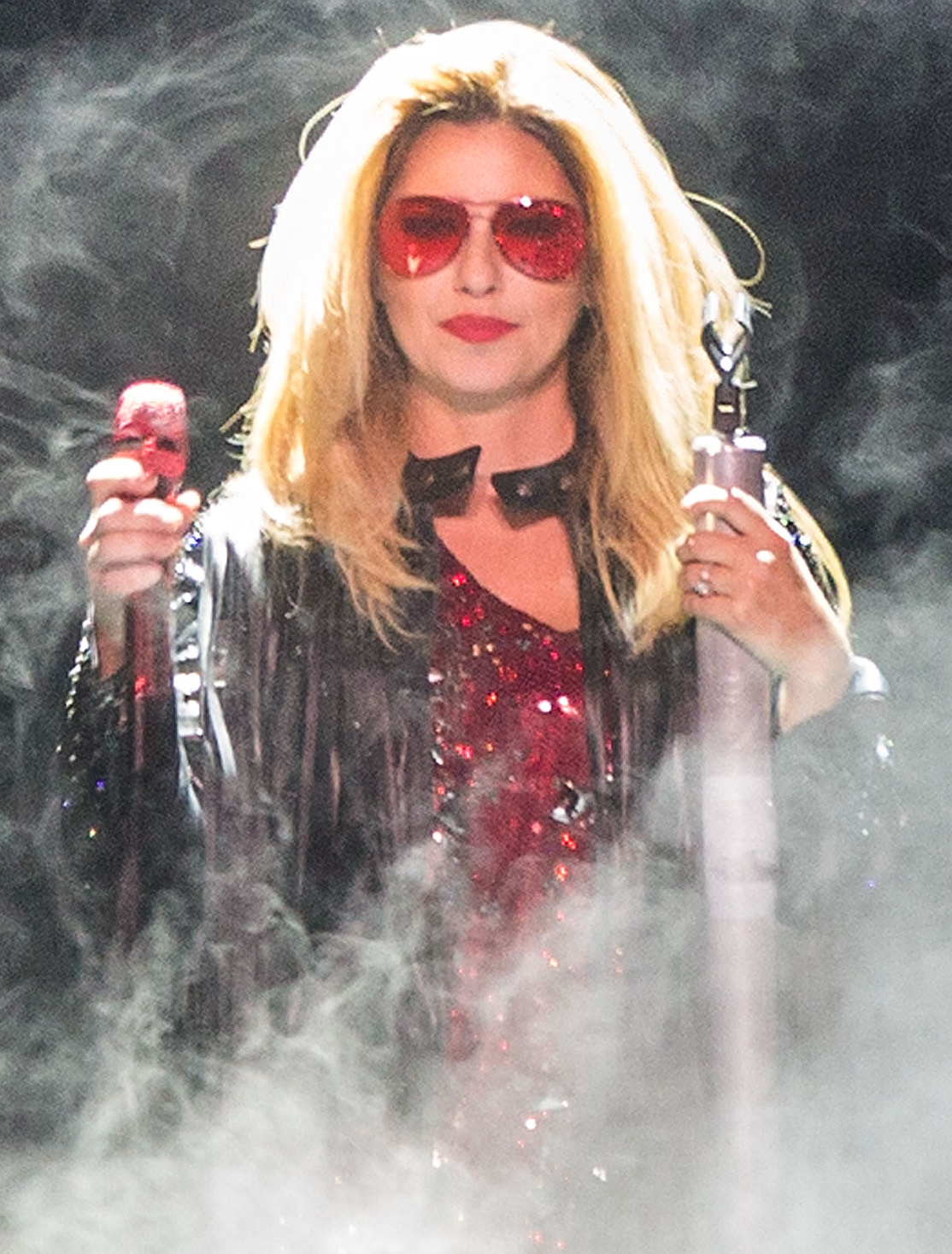 The setlist, though, put the emphasis on Twain’s country side. After a raucous opening version of “Rock This Country!,” she settled into a stomping groove, running through fan favorites like the fiddle-heavy “Don’t Be Stupid” and a punchy take on her first country radio hit, “Whose Bed Have Your Boots Been Under?”

Lest anyone forget where Twain’s roots are planted, she and the band set up at the lip of the stage with acoustic instruments to add a little old-timey flavor to “No One Needs to Know” and the heartfelt “Today Is Your Day.” There was a little wink added to the countrified proceedings, as well: During the title track to her last album Up!, Twain mounted a fringed saddle that lifted in the air and took her in a long slow circle above the audience as she sang.

Between tunes, Twain sounded downright awestruck at the rapturous response she was getting from the packed arena. Her between-song banter had an “aw shucks” charm to it, with her letting out lots of audible laughter. And prior to her skyward saddle ride, she spoke haltingly about losing all of her confidence a few years ago, and called her return to the stage nothing short of a miracle. It was a wonderfully humanizing moment rarely seen in a concert of this size.

This being the first night of a long U.S. tour, the kinks were visibly and audibly still being worked out, and Twain had yet to settle into any kind of routine. She flubbed a couple of lines during “Come On Over,” nearly missed a couple of cues (thankfully not any that put her in danger of being hurt by the flames and fireworks shooting from the stage), and ran out of vocal steam trying to hit a big note during an otherwise great version of “Any Man of Mine.”

Rock This Country is billed as Twain’s farewell tour, but as she told Rolling Stone Country recently, she feels like she has “so many other things to do musically.” She also acknowledged that she’s not closing the door on touring completely. And after the reception that she received in Seattle last night, and will surely receive as she criss-crosses North America this summer, she might soon be rethinking those retirement plans.