For his new live CD/DVD Back to Macon, GA, Gregg Allman returned to the small riverside town where the Allman Brothers Band first got their start, jamming on psychedelics in the local cemetery; the same place where, in 1971, his older brother and legendary guitarist Duane Allman died in a motorcycle accident. But today, Gregg Allman is even further south, in his childhood home of Daytona Beach, Florida, tending to matters in the wake of his mother’s recent death at 98 years old.

“I just got through picking out the urn for the ashes,” Allman says of the late Geraldine Allman, the woman known as “Mama A,” who helped her son find the 95 cents he needed to buy his first guitar at the local Sears and Roebuck, back when he was a teenager. There’s a weariness in his voice, though he can still erupt into cackles. “Just doing that funeral thing. She died in her sleep, so that’s a pretty good deal. I still marvel at the mere fact that I am alive, every morning.”

50 Rock Albums Every Country Fan Should Own

Maybe it is a miracle — somehow, through years of drug abuse, surgeries and sickness, he’s still on the road, touring behind the Gregg Allman Band, now his primary vehicle since the Allmans took their final bow at New York City’s Beacon Theater in 2014. Live recordings are nothing unusual for the band, but Back to Macon, Georgia, out today, is a special piece of resilience. Take this version of “Ain’t Wastin’ Time No More,” premiering exclusively on Rolling Stone Country, that’s performed as a living, breathing entity, bolstered with dynamite horns and a vocal delivery from Allman that still sits in the perfect spot between bluesy grit and that soft, Southern touch that made hippies swirl.

Though he’s still yet to see the DVD, he actually contends that “Ain’t Wastin’ Time No More” is the one song he’s improved on since the taping. “That was very early on. I’ve perfected it since,” he says, rattling off every member of his band, including his bass player, Ron Johnson, whose hometown he insists is spelled “N’awlins”; ace guitarist Scott Sharrard; and drummer Steve Potts, the “clock man” who keeps them all in the pocket. “If you play a song a few beats too fast, the groove goes out the window. It’s easy to start off fast because you’re all full of adrenaline. Used to be drugs,” says Allman. He’s clean now — no booze, no gluten.

Originally appearing on 1972’s Eat a Peach, Allman recorded “Ain’t Wastin’ Time No More” after his brother’s tragic death: lyrics like “you don’t need no gypsy to tell you why/you can’t let one precious day slip by” came to hold a new resonance after the accident. Despite the heavy presence of the Allman family spirit at the taping — some of Duane’s instruments were on hand and Gregg’s son, Devon, made an appearance — the Back to Macon version is pretty revelatory, boosted by “some old-school horn arranging with just a touch of echo” and Sharrard’s whiplash guitar, which tightly noodles but builds in plenty of space, too, just like Allman likes it. 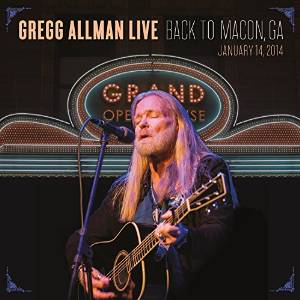 Allman is impressed, however, by fellow Southern rockers Kings of Leon (the Nashville band owes a lot to the country-blues infusion the Allmans created), as well as a British crooner that’s a little more unexpected.

“I listen to Kings of Leon,” he says, “and I always wanted to meet those fellas. I think they are a very, very incredible band. I love their records. And I really dig Sam Smith, oh boy. You can print that all day.”

Right now Allman has plans to record a new solo record in Muscle Shoals, Alabama, with producer Don Was, the place where the Allmans spent much time and Duane established tenure as a session guitarist at FAME Studios in the late Sixties. And Allman certainly wouldn’t be upset if the opportunity to collaborate with the “Stay With Me” singer presented itself. He’s going to be prepared, at least. “That would be the end-all, Sam Smith. A nice, soulful sad song. I’d love that. I’m working on one just in case,” Allman laughs.

The 16-track Back to Macon LP was recorded in the town’s 131-year-old, 1,000-seat Grand Opera House on January 14th, 2014. Although the Allmans released several live recordings, including the now classic At Fillmore East (and thousands of fan-made bootlegs), this is the first by a solo member of the band. The songs, from a funked-out “Whipping Post” to the mellow Memphis brass of “Melissa,” meet in the middle between how they were first recorded and how Allman has interpreted them over the years. He doesn’t deconstruct the melody, like Bob Dylan, but he does pump enough new life into them so they don’t sound like tributes to a bygone era.

“This is the most incredible musical experience I have ever had the honor of being a part of in my career, bar none,” he says of playing with his current band. It’s a strong statement from someone who has shared a stage with some of the greatest players of all time. “They are all musicians I can learn from, and people I admire and look up to. They are my peers. Though they are younger than me, it doesn’t mean a damn. Nobody works for me; they work with me. And man, do they do it.”

Allman will take that band on the road with him to the Allmans’ annual Peach Fest August 13th through 16th in Scranton, Pennsylvania, the first since the band called it quits; and to his inaugural Laid Back Festival on August 29th at New York’s Jones Beach Theater. For those who can’t make it to the show, there’s always the Back to Macon DVD, which can best be consumed with this piece of advice from Allman himself, who admits to having watched a live Pink Floyd video or two in his day.