Ron Louie would do anything to catch a couple of songs.

Last fall, the country and roots music superfan persuaded his wife, Janine, to take a trip to Alabama to see Jason Isbell, one of his all-time favorite artists, headline a festival in Isbell’s hometown. After a full weekend of music, Louie still needed more. He discovered that if he and Janine hurried back to Nashville in time, they could catch Old Crow Medicine Show play a few songs at an in-store at Grimey’s record shop before catching their flight home to New York.

“The set was two hours before our flight,” says Janine Louie. “I was flipping out, but he pulled it off. We caught two songs, got to talk to the band, and made our flight home.”

Louie lived for concerts, especially country, roots, and Americana shows. When he returned from Alabama last October, he was right out the door in search of more music. That month alone, he saw gigs by Kacey Musgraves, Kelsey Waldon, Shovels & Rope, Michaela Anne, Elizabeth Cook, Jamie Lin Wilson, Steve Earle, Carrie Underwood, and the New York band Spottiswoode & His Enemies. In all, Louie, who lived on Long Island with his wife and son and worked as a graphic designer in Manhattan, attended 96 concerts last year.

On March 29th, Ron Louie died due to complications related to COVID-19. He was 52.

Louie’s death sparked an immediate response from the country-roots community. Margo Price, Brent Cobb, Caroline Spence, Kelly Willis, Sunny Sweeney, Michaela Anne, and Waldon all posted tributes to the man known on the scene — and on his concert-focused Instagram — as “Ronny Vegas.” Isbell dedicated his song “Traveling Alone” to him during a livestream performance. Michaela Anne performed an entire virtual show “From Here, for Ron” in his honor.

“Ron was the ideal superfan,” says Michaela Anne, who had grown close with the Louie family over the years. “He wasn’t invasive; he just genuinely loved the music, and he wanted to support you. His passing has made me really reflect on that relationship between artist and fan, and how important it is; how it’s the only thing that keeps this going.”

“I loved seeing him in the front row with his wife,” Price says. “I’ll miss seeing him sing along in the crowd.”

Ronny was a true music fan… We will miss seeing him at our shows ❤️ sending love to his family and friends. https://t.co/DGqfS0bYaC

“Ron’s main thing was he was always so devastated if he missed a show,” says Josephine Bisco, a fellow New York-area Americana fan who attended dozens of shows with Louie over the years. “When I heard that he passed, I thought, ‘That’s what would’ve upset him the most: He’s going to miss all the shows.’”

A little less than a week before Louie began feeling ill, he attended a concert in Brooklyn by the California roots collective Dustbowl Revival on March 12th, the last evening before New York governor Andrew Cuomo banned gatherings of more than 500 people in the state.

“High energy, great musicianship, and beautiful harmonies” Louie wrote of the show on Instagram the following morning. “If this is the last show for a while, it was a good one to hold onto.”

Ronald Louie was born October 4th, 1967, the second of three sons. He grew up on Long Island and began discovering a passion for rock music as a teenager. He taught himself guitar, piano, and drums, and at 16, he worked at the local music chain Record World.

As a teenager, Louie also fostered an interest in graphic design, attending New York’s School of Visual Arts and joining the internationally renowned design firm Pentagram after graduation. In the mid-Nineties, he joined The New York Times, helping to launch the newspaper’s first website “with the push of a button from Ron’s workstation,” as Louie’s website notes.

“Ron was smart and sensible,” remembers Rich Meislin, a former colleague at the Times. “He was a great person to work with, able to listen and accommodate new ideas and reject bad ones.”

Around 1995, Ron met his future wife Janine, a fellow avid concertgoer. In May of that year, the couple went to see the Allman Brothers, Janine’s favorite band, at Radio City Music Hall. It would be the first of several hundred concerts the couple would see together over the next 25 years. A few years later, they gave birth to their son Jackson, loosely named after one of Janine’s favorites, Jackson Browne.

When Janine and Ron first met, Ron was mainly a fan of classic rock, a devotee of the Beatles, Bruce Springsteen, and R.E.M. The couple made it a point to see Paul McCartney each year that he toured and to attend as many Springsteen shows as they could afford.

Over the years, Ron began to slowly discover roots music and found the surrounding scene to be much more aligned with his tastes. “The arena shows got too big for him,” Janine says. “He didn’t drink, didn’t smoke, and for him it wasn’t about going out and getting hammered.”

Over the past 10 years, Ron found a new community in the small clubs and listening rooms of Manhattan and Brooklyn. “All those little music halls in New York, like Rockwood Music Hall, that was home for him,” says Janine. “He found the scene that he liked.”

Over the past decade, Ron could be found in the front row of those clubs several nights a week. His flowing, salt-and-pepper hair can even be seen on the album cover to 2016’s Live at Rockwood Music Hall, a concert LP by one of his favorite groups, JohnnySwim. (That’s him in the lower left corner, next to the “J”.) 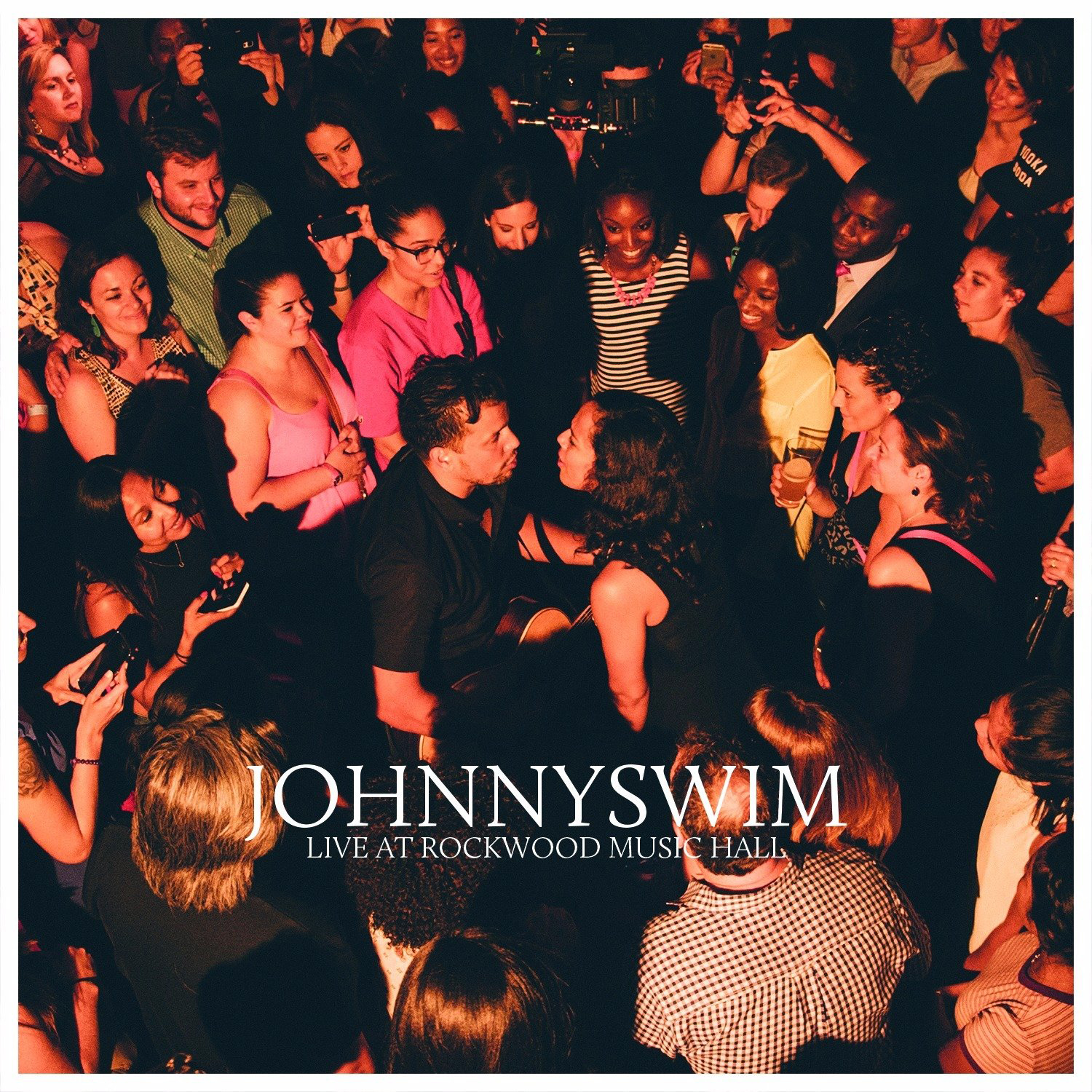 “Ron would go to two, sometimes three shows a night,” Janine says. “I’d go to him, ‘Oh, are you borough-hopping tonight?’ He would drive in from Long Island in the morning, park his car in Brooklyn, take his train to work, go see a show in Manhattan after work, take a train to Brooklyn, see another show, then get in his car and drive home.”

Ron and Janine bonded over their music fandom, which had a tendency to overlap: He was into singer-songwriters, she more into jam bands. When they just had to see a certain show together, they’d find a sitter for their son. Other nights, one of them would stay home. It was often Janine — she didn’t mind.

The Louies traveled frequently for concerts. They’d drive all around the tri-state area or fly to Nashville. One time, while in Hawaii, they ended up at a songwriter festival in Maui. “Twenty-five years of marriage overflowing with a hundred years of memories,” is how Janine’s brother Dan described their partnership.

For his 50th birthday in the fall of 2017, Ron returned to Nashville, this time with a full party in tow. Ever charismatic, he persuaded 20 of his closest friends and family members to fly down with him for a special gathering: Louie had hired Michaela Anne to perform a private show at a Nashville restaurant.

“We showed up figuring we’d just be background music,” says Michaela Anne. “But Ron sat everyone down and said, ‘This is an artist I really care about, and I hope you guys like her music.’ This was a room full of people who weren’t my biggest fans, but they loved Ron so deeply that they just paid rapt attention. The second a song would stop, they stood up and clapped. The attention and love they gave us, just as an extension of Ron, was really incredible.”

“It was one of the best nights of his life,” says Janine.

Ron was, as his friend Josephine Bisco puts it, a “harmless groupie.” He refused to be anywhere other than the front row and would insist on buying an album and getting it signed after each show. When he attended bigger shows at seated theaters, Ron knew how to get front-row seats nearly every time, waiting until the week of the show and then refreshing Ticketmaster’s website every 10 minutes during the day until the venue released a block of last-minute premier seats.

He refused, on principle, to pay for VIP tickets, but would always put down money for something at the merch table.

“He’d always buy merch, physical albums, whatever he could to help support the artist,” says Shawn St. Jean, a friend and fellow concertgoer who runs the New York country-music publication The Country Scene. “He always felt bad if he had to miss a show.”

“You know how trainspotters can be really nerdy, and they have to see every single train?” says Bisco. “Ron was like that with Americana music.”

On New Year’s Eve 2018, Ron and his wife went to see Price and Lilly Hiatt perform in Brooklyn. “It was pouring rain, and Ron literally stood in the cold and the rain while I waited in the restaurant, until the doors opened,” Janine remembers. “He eventually texted me and said, “OK, you come out.’ We stood right in the front row.”

Outside of music, Louie was an avid golfer and played in a weekly curling league. He was a devoted fan of both the New York Mets and Knicks. “He suffered over those two teams like I can’t even tell you,” his wife says.

But for Janine and Ron, going to concerts was always their number one passion. “We spent every penny on music,” she says. Their most recent obsession was country singer Tyler Childers. “We couldn’t get enough.”

In February, the couple took yet another trip to Nashville to see Childers perform at the Ryman Auditorium. It would be the last show they ever saw together.

About a month later, Louie began feeling sick, and he self-quarantined from his family in his own house. When he tested positive for the coronavirus, he went to the hospital as his condition worsened. When Louie arrived, he texted with his wife constantly, giving her updates. Ultimately, he had to be placed on a ventilator, but just before that, he told Janine he had purchased the new Lukas Nelson album from his hospital bed.

“We had an amazing life,” Janine says. “I don’t know how I’ll ever hear music the same way.”

A few months before he died, Louie went out on a Tuesday night after work to see the up-and-coming country songwriter Tenille Townes perform in Manhattan. The show ended fairly early, and Louie briefly chatted with his friend Shawn St. Jean afterward.

St. Jean said he was catching a train back home. Louie was headed uptown. It was still early, and Nashville songwriter Jamie Floyd was playing at a country dive bar.