In 1988, Rodney Crowell was already known as a talented sideman and an impressive songwriter: he played guitar and sang in Emmylou Harris’ band for several years, and scored credits on hits for Waylon Jennings, Bob Seger and the Oak Ridge Boys. But that same year, he also released Diamonds & Dirt, an album that minted Crowell as a solo star, spawning five hit singles and earning Gold certification from the RIAA.

Many artists would be proud of this commercial breakthrough, but Crowell, 66, dismisses it on “I Don’t Care Anymore,” the blasé manifesto that sits at the center of his bracingly reflective new album, Close Ties. “I listen to vinyl in the evening when we’re cooking, and Diamonds & Dirt fell out of the shelf,” Crowell tells Rolling Stone Country. “There I was [on the cover] with silver-toe boots and a wife-beater under a jean jacket, walking down the road like a poser. I looked at it, and I said, ‘You wanker!’

“It stuck with me,” he continues. “I’m going to write a song about how I don’t care about all the things that this guy cared about anymore.”

Still, he doesn’t regret the decision to strut his stuff on the album cover. “I was a good guy; I was trying to make good art,” Crowell allows, before turning toward the self-critical again. “That doesn’t mean that I wasn’t an insecure little shit.” 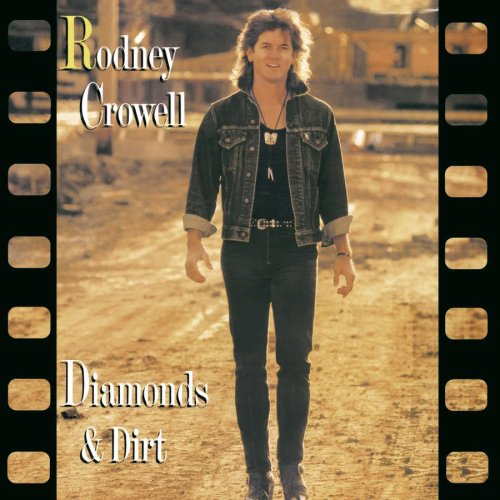 The legacy of Diamonds & Dirt is just one of several strands of country music history that courses through Close Ties. Crowell sings of Townes Van Zandt and Steve Earle, of Mickey Newbury and Tom T. Hall, and he riffles through classic song forms – shuffling blues, light honky-tonk and string-heavy ballads. “I’ve lived long enough now that some of my contemporaries are starting to pass from the earth, so those relationships started coming to the fore as I was writing songs,” Crowell explains. “Relationships that were so personal and so evocative in my life had passed away, but here I am, still tickin’, still slippin’ along. More than once I asked myself, ‘Who am I now?'”

He’s ruthless as he digs for the answer to that question on Close Ties. Crowell starts “Forgive Me Annabelle” with a series of stinging self-deprecations: “Maybe I was out of line, but mostly I was out of touch / You lean on anger like a crutch, you’re bound to take a fall / No doubt I was slow to learn, I just couldn’t get the gist.” Even seemingly innocent, happy-go-lucky moments – like encountering Willie Nelson at a party in Nashville in 1972 – don’t go unscrutinized. “I played him this shitty song I wrote and puked out in the yard,” Crowell says. “It was a shitty song – I had no business playing it for anybody.”

Nothing on Close Ties is as cutting as “Life Without Susanna,” which tracks Crowell’s friendship with Susanna Clark, an artist and songwriter (also the wife of Guy Clark) who died in 2012. “Susanna was a close, close friend of mine, she taught me a lot,” Crowell says. “The last ten years of her life, her agoraphobia took over. I tried hard to pull her out and get her out. She wasn’t having it; she was more stubborn than me. You had to go visit her in bed. It pissed me off. It hurt. When she passed on, I was really angry. But I loved her.”

This vicious emotional see-saw plays out blow-by-blow in the song’s lyrics. “Life without Susanna troubles me in ways hard to express,” Crowell sings. “As she withdrew I grew distant and judgmental/ A self-sure bastard and a stubborn bitch, locked in a deadly game of chess.” There’s no redemption waiting at the end of the song: “Life without Susanna is no man’s saving grace / This is life without Susanna, and I can’t find my place.”

Crowell believes this sort of unsparing inquiry – he describes “Life Without Susanna” as “the most raw love song I’ve ever done” – is only possible with age. “I couldn’t have written that when I was 24,” Crowell asserts. “I wrote some good songs. I wrote ‘Til I Gain Control Again’ when I was 22 [the same age, funnily enough, that he played that “shitty” ditty for Willie Nelson], and that’s been around forever, but it’s not as emotionally intense [as ‘Life Without Susanna’]. The more I do this, the more singularly my sensibilities start to express themselves.”

Sometimes, though not always, such idiosyncrasy can come at the expense of mass appeal. “One of the things that sort of rules out is the broad-stroke romantic love song,” Crowell acknowledges. “Those are not readily available anymore. When you’re younger, love is this magic thing where the heavens open up. You live 40 years past that, you realize sometimes the heavens close down.”

Crowell’s not overly nostalgic for those types of songs. These days, his worldview has changed.

“I wanted to have those hit songs, and I wanted people to think that I was cool,” Crowell says. “Now all I want is to be heard.”