“It’s a survival experience. I find it thrilling,” says California native Chris Thile of the two-degree weather in his temporary home of Oberlin, Ohio. He and his band, the Punch Brothers are doing both an entertainment and educational residency there, performing concerts, giving lectures and conducting student workshops at Oberlin College and Conservatory.

The brutal weather is almost Thile’s new normal. He arrived in Ohio just after hosting the Valentine’s Day edition of A Prairie Home Companion, in record-cold St. Paul, Minnesota. “That was a highlight of my life,” says the 34-year-old musician of his two February stints filling in for host Garrison Keillor and performing with the Punch Brothers on the program. “I grew up listening to that show. Garrison has created this world we can inhabit for two hours on Saturday. You have to participate to get the full benefit of micro creation. The point is not to tell the story but help listeners tell stories, exist creatively. That is the genius of Garrison Keillor, of J.R.R. Tolkien, of any great piece of art.”

By that definition, the Punch Brothers’ latest album, The Phosphorescent Blues, is also a fine piece of art. The genius of Thile and bandmates Paul Kowert, Noam Pikelny, Chris Eldridge and Gabe Witcher is the artistry with which they mix bluegrass, roots, rock, pop, jazz and classical to create a unique, contemporary sound. On the T Bone Burnett-produced LP, that sound ranges from the 10-plus minute “thesis statement” of the new album, “Familiarity,” to their rendition of the traditional “Boll Weevil.” Those, and all the songs in between, easily fuel an array of personal ruminations.

There’s little doubt the five musicians are virtuosos. But the depth of their artistry comes with the price of occasionally confusing some critics and fans who scratch their heads at artists who move from roots to classical to a cover of Radiohead’s “Kid A” with nary a pause. Suffice to say, the Punch Brothers’ music won’t be found on any mashups.

Thile seems aware of the occasional disconnect, though, saying the residency at Oberlin keeps him and his band mates musically grounded. “I love music with everything I have, and when I am in a front of a classroom talking about music sometimes someone will ask me a question and it reminds me to really think about something, to really feel something. The boys and I would take it into the writing room the next day and we could evaluate and say, ‘We are not doing what we say we want to do. Why aren’t we doing that?’ And lo and behold, a different piece of music emerged.”

The group crafted the new album while holed up at writing retreats between their myriad side projects — which for Thile included recording and touring behind A Dotted Line, the first Nickel Creek album since 2007, and recording the Grammy-winning Bass & Mandolin with one of his musical heroes, Edgar Meyers.

“Of all the projects I’ve done the last few years, if you had told me that was the one that would win a Grammy,” he says, laughing. “It is always a thrill. You go to the Grammys and you say, ‘I don’t care if I win or not,’ and of course you care. But that record, just Edgar and I creating sounds we like to make . . . It’s a boutique record. For that to win the Grammy, it tickled me.”

Thile fills Rolling Stone Country in on the Punch Brothers’ new album and how marriage, impending fatherhood and smart phones led to some of its most profound lyrics. 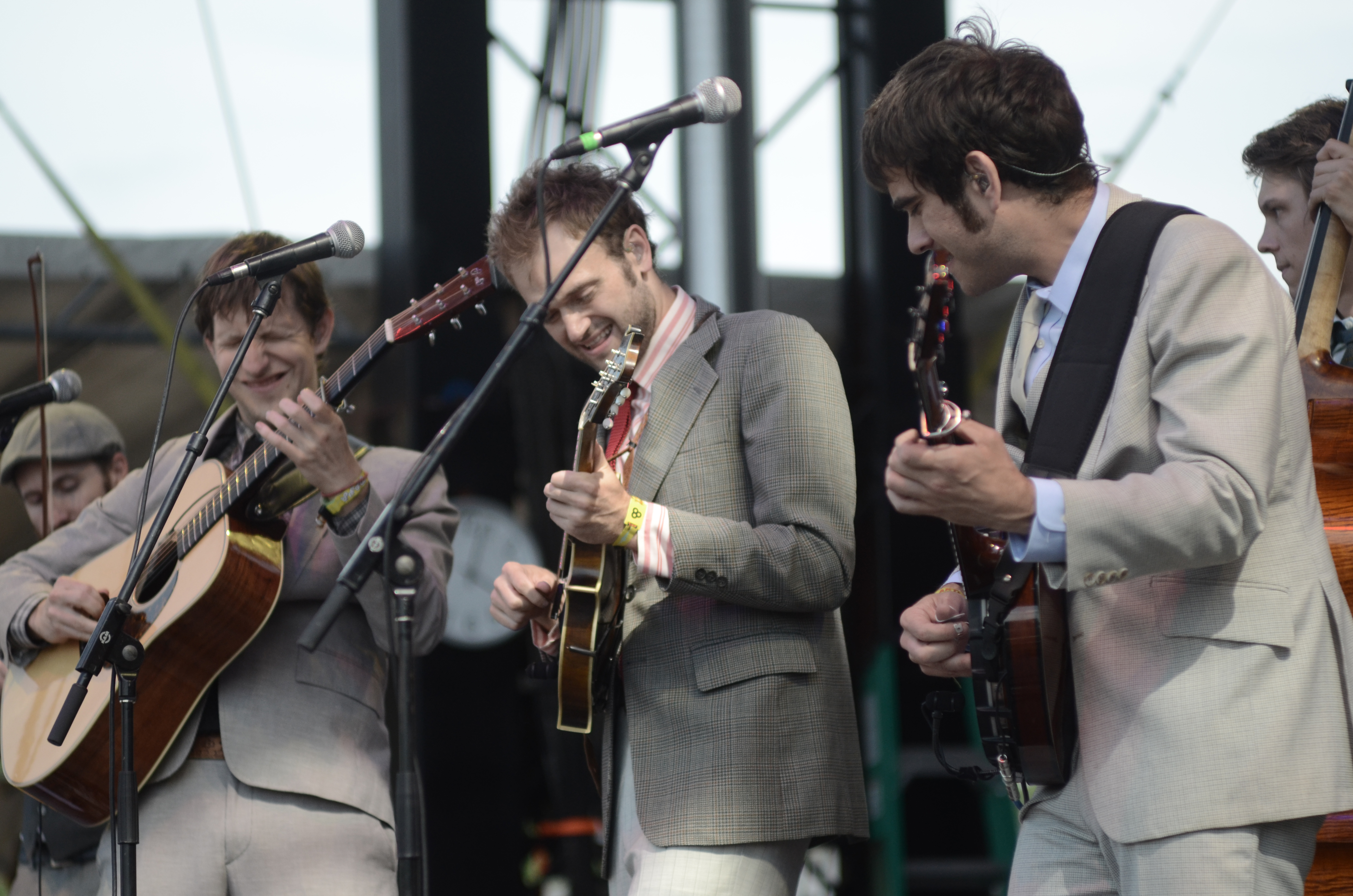 This record explores how technology has caused communication to shift. How have you experienced that change in your own life?
The boys and I have been a band now for eight or nine years and have experienced the rise of the smart phone together. When you sit down in the room with these same five guys and take stock of where your life is and where life in general is . . . We travel all over the place and we interact with people, and [we see] person after person experiencing life through phones.

As the boys and I start marrying ourselves off — I got married [on December 23rd, 2013 to actress Claire Coffee], and we have a baby on the way — even as I fear all the change that we have foisted on ourselves with smart phones, they are invaluable tools, especially for someone who is gone from the people he loves so much of the time. I don’t know if my wife and I could do what we do if it weren’t for these things.

And while communication is much easier, the quality is diminished.
Yes. The basic human desire to connect with other human beings is alive and well, but the quality of the connection we are settling for is lower. That’s not to say this is a hopeless case. I think we can start making these things work for us and not the other way around. The record, lyrically, is something of an exploration of those kinds of thoughts. What does connection mean to various kinds of people and how do we best pursue that at a time when it’s very easy to take things connected for granted?

Did you start with that theme, or did it manifest itself?
We definitely didn’t go in with a theme. The theme kind of tackled us as we were working on the music, as our conversations would drift toward that kind of thing at the end of the night.

How exactly does the songwriting process work for the Punch Brothers?
For me, music always leads. Lyrics are only about how they sing. It is wonderful if they read well, too. In the very best scenario, sometimes a lyric will pop out with a melody, simultaneously. That’s a lovely thing, but you can’t rely on that.

So much of the time I will be working on an idea and syllables will come out of my mouth. The boys will make fun of me. It sounds like we’re in Dr. Seuss-land. They will look over and say, “What did you just say?” I can remember working on a lyric and I just kept singing the words, “Day old farmer. Day old farmer.” I have no idea why.

“Familiarity,” the first song on the album, sounds like the prelude to the entire album. Was it the first song you finalized?
That [song] was kicking around about two years; it was slow cooked and allowed to gestate fully. That was a real luxury on this project. We could sit back and we would write for a week or two weeks and then go off and do a few things, and then the boys and I would reconvene and come back to some of these ideas.

“Familiarity” was the first thing that got started for the record and last thing that got finished. And that’s another reason why it had to be first, because it serves as a thesis statement to the record. I know this will sound terribly grandiose, and I don’t mean it to, but it’s almost like an overture for an opera that touches on every theme.

I can’t help but think that working with Oberlin students makes you go back to the basics of music, thinking about fundamentals you may not otherwise consider.
That’s absolutely right. Sometimes you can sit there and write and write, but you’re buried in clutter. You are writing through all the clutter of a life lived; you’ve got all these scraps lying around and all these distractions, and you have unproductive hopes and dreams for a project.

These kids at Oberlin, they are not surrounded by as much clutter. It is much simpler here, and that’s beautiful. There’s so much enthusiasm.

You mentioned expecting a child soon. Were you thinking of him, of all the things he’ll see and experience that we never will, when you wrote any of these songs?
Absolutely. The song “Forgotten” — I was thinking a lot about my family, that once you bring a child into the world, you are playing a game of life for keeps. There are some stresses, of course. I am no less ambitious a musician as a result. To be clear [when I wrote that song] my little boy wasn’t actually conceived yet but my wife and I were planning [on becoming parents].

You know how you talk to your friends? “How are you doing?” “Crazy! I have so much going on.” Everyone says that. We could all use more people in our lives saying, “You ain’t gonna die alone. You ain’t gonna be forgotten.”

So how do you guide a child through this maze of communication?
I think of my parents, what they meant to me, what they taught me over the years. Their parents have health problems, and they have to deal with that. I’ll have to deal with that. I see their mortality and stare at my mortality in the face. I wanted to say [the lyric, “You ain’t gonna be forgotten”] to them and I hope someone says that to me. So we want to figure out how to live with technology so that it doesn’t have to be an outright crisis for the generation following us. I think of it the way may parents presented TV to me: “This is fun and this is a nice thing, but we won’t have it on all the time. “

You juggle so many projects — Punch Brothers, Nickel Creek, side projects, teaching, family — yet you always seem completely present whether on stage, in an interview like this, or elsewhere. How do you do that?
If you can’t sweep it all aside, you will be the one swept aside. I can feel, on the rare occasions when I haven’t had much going on, that I go into hibernation. I become less present. I become flighty, unfocused and kind of content to just let the world go by. And so I feel when there are a lot of irons in the fire, it gets the machine humming. I feel my life force is diminished when I don’t end the day well spent. Otherwise, I’m busy, busy, busy, but nothing actually gets done. I am working on that balance right now.

Having Claire, and soon a child, that is going to be an incredible incentive to take it a little easier. Claire and I already have a new schedule in place that allows more off time. It is incredible to be home and to be thinking about music quietly, as opposed to loudly, to be on input and not always output. You can run out. I did feel, last year, like the well had almost run dry. I feel like I am refilling the well right now.