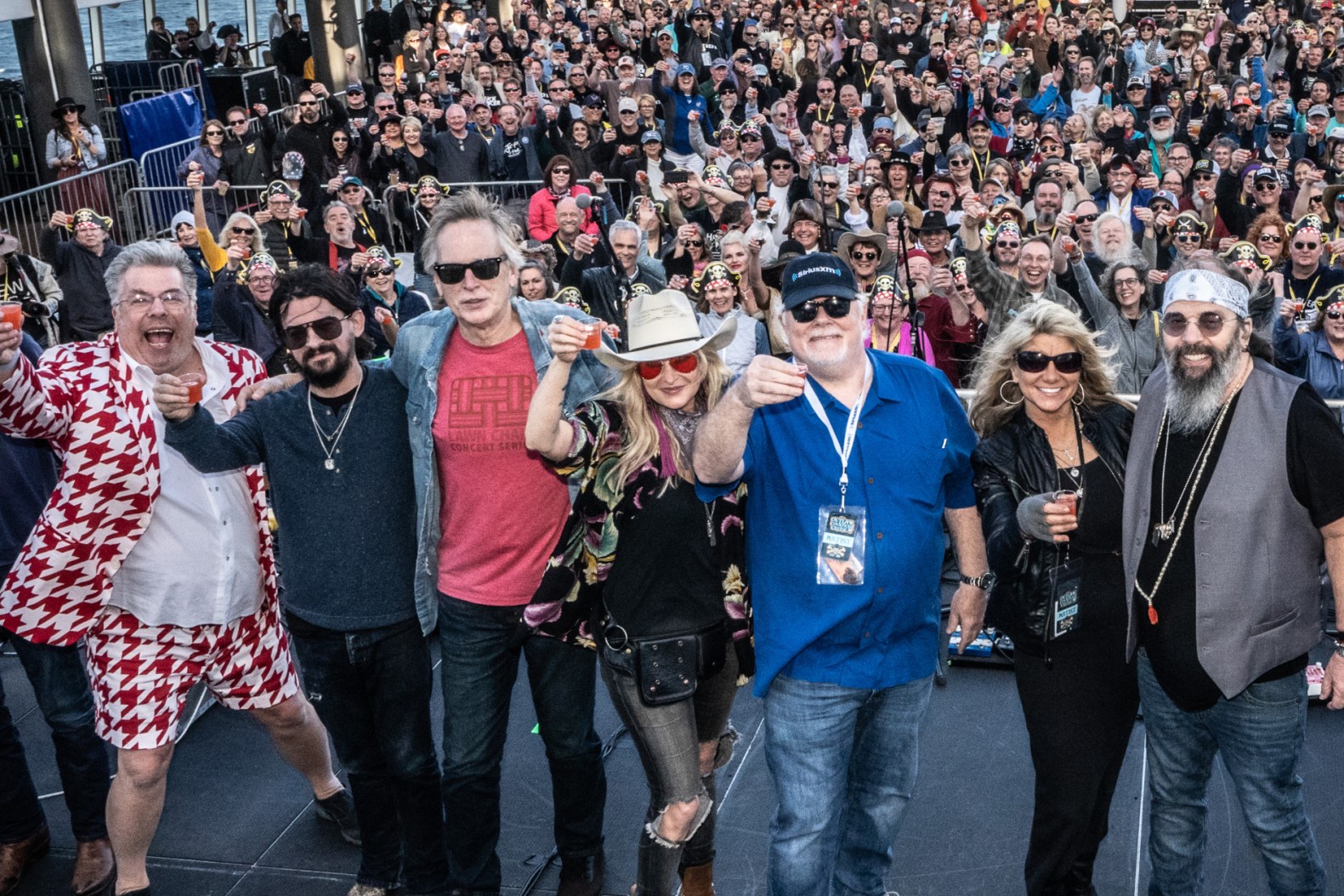 About 200 yards away in a discreet cabana, within earshot, sits Earle himself, reclining on a chair in sunglasses and a Shooter Jennings T-shirt. It’s an off-kilter juxtaposition, the sober since 1995 singer listening to one of the songs from his drugging years as it serves as the soundtrack to unleashed vacationers getting hammered on the beach.

That, however, is the dichotomy of the Outlaw Country Cruise, a fantastic voyage of sea and sand that assembles some of country, rock and Americana’s most against-the-grain artists on one boat for five days of live shows, film screenings, tattoo sessions, Best Trucker Hat contests, Lebowski-themed bowling and booze. Lots and lots of booze. Lucinda Williams, Drive-By Truckers, Margo Price, Shooter Jennings, Old 97’s and Earle, a perennial Outlaw Cruiser from when it was still branded the Lynyrd Skynyrd Simple Man Cruise, are all aboard for this fourth year, which boasts 45 acts in total and, like its predecessors, is sold-out.

“It’s a really cool group of people,” says Old 97’s singer Rhett Miller, making his second voyage. “Like a lot of things, the definition [of outlaw] tends to be negatively presented. We’re not Nashville Top 40 bullshit, and we’re not Confederate-flag waving rednecks. It’s a very liberal, yet very old-school Americana contingent of people. And that’s such a cool small section of the Venn diagram.”

Today, on the third day of the journey, the massive Norwegian Pearl is anchored in the crystal blue waters of the Caribbean, a short ship’s tender ride from Great Stirrup Cay. From the beach, the snow-white vessel beckons like a glistening kingdom, where cruisers from across the U.S. and as far away as Australia, Norway, Ireland and Germany can commune across 12 decks of stages, restaurants and bars. But right now, after a day-and-a-half at sea in pretty choppy conditions, and with the music blasting on the isle — steel guitars replacing steel drums — no one seems to be in much of a hurry to get back onboard.

Jim Lauderdale, the Americana songwriter who earlier in the day taught tai chi to cruisers on the beach, walks shirtless around the rows of chaise lounges, fist-bumping fans. A dude in a denim shirt wades into the ocean, while another figures that his gray Fruit of the Loom briefs are good enough for swimwear and gives everyone a show. Suntan lotion mixes with whiffs of vape smoke. You could concoct a coconut-flavored drinking game around spotting the number of beards on display. Harley-Davidson T-shirts — along with those saluting Woody Guthrie, Guy Clark, Robert Earl Keen and Bob Marley — are everywhere. There’s even one misguided soul sporting a “Legends of the Confederacy” tee. He’s lucky Earle doesn’t see it.

“It took me about two years to run all the Confederate flags off,” says Earle a week after returning from the cruise to his home in New York. He recalls those first two years, when a Skynyrd fan — others would follow — asked him to sign his flag during the onboard autograph sessions. “He was a leftover from the Simple Man cruise. I felt bad. But I didn’t see a single Confederate flag this year or last year. Part of that is me being a dick about it.”

Despite his gruff exterior and no-bullshit demeanor, Earle is far from the dick he claims to be when he’s onboard. In fact, he’s one of the more gregarious of the artists on the Outlaw Country Cruise, where engaging with the 2000 or so cruisers is not just expected but inescapable. At lunchtime, you’ll see him loading his plate at the ship’s Garden Buffet. Over dinner, Margo Price and her family will be seated alongside you at the hibachi grill. The next morning at the spa, Nikki Lane might be in the waiting room. On the final night of the trip, at the conclusion of Mojo Nixon’s Rolling Stones tribute, Dan Baird, the former Georgia Satellites singer, hopped off the stage, and with Telecaster cradled in his arms like a newborn, joined the pilgrimage of fans as they made their way to the next venue, a parade of leather and denim moving en masse.

“It’s this incredible cesspool, if you will, where we co-mingle with our audience,” says Jeremy Tepper, the program director of the Outlaw Country channel on SiriusXM, whose DJ-slash-artists like Earle, Jennings and Elizabeth Cook both perform and record their radio shows onboard.

A Music Cruise Sells Out a Year Ahead of Time

When Sixthman, the Atlanta-based cruise-promotion company, launched the Outlaw Country Cruise in 2016, it paired up with Little Steven’s production outfit Renegade Circus and Tepper, who curates the ship’s lineup with Sixthman’s talent-booking team. Tepper is an everywhere presence aboard the boat, bopping his head to Jennings’ set, watching Price from the wings as she commands the pool deck crowd and holding court from his suite overlooking the main stage. He also oversees the SiriusXM Sessions at Sea, a series of four onboard tapings that air on Outlaw Country, including the annual all-star guitar pull. This year’s slate featured a boisterous Q&A between Elizabeth Cook and Margo Price, and what Tepper refers to as “the kid’s table,” a loose “remember when?” conversation among second-generation artists like Jennings, Amy Nelson, Bobby Bare Jr. and Cocaine & Rhinestones podcast host Tyler Mahan Coe.

“You can kind of trace this lineage,” says Lauderdale, connecting the dots from onboard legends like Cajun fiddler Doug Kershaw and troubadour Dale Watson to the Old 97’s and Drive-By Truckers. “It’s a really rich field of music.”

“The Outlaw Country Cruise becomes a place where that legacy of what happened in the mid-1970s lives on,” says Tepper. “It’s still alive and we’re moving it forward.”

But aside from the music and some salty language — it is satellite radio, after all — there’s nothing outrageously outlaw about the Outlaw Country Cruise. It’s near impossible to sneak pot onboard: drug-sniffing dogs and law-enforcement agents lined the security checkpoints at the terminal in Tampa, eyeballing musicians and fans alike. Any tax-free spirits you buy in ports like Nassau in the Bahamas have to be checked until the end of the voyage. And the shipboard efforts to fight a Norovirus outbreak — including nonstop reminders to wash your hands — are ever-present, strict and no laughing matter. When “Don Henley Must Die” singer and DJ Mojo Nixon joked from the stage, “I had 400 drinks in four days. There’s a good chance I’ll shit my pants,” the crowd in front of him cringed.

In other words, the rebel ethos only goes so far. The boat may be outlaw, but it’s outlaw in moderation.

“It’s a little more sober than it was the first year. Not that people aren’t getting drunk, but it’s a different kind of drunk,” says Earle, nodding to the median ages of the cruisers by ticking off a list of onboard medical emergencies that he’s either witnessed (heart attacks) or experienced himself (kidney stones). “They have real medical facilities. I’d have been fucked if they didn’t.”

Most amazingly, considering the amount of alcohol consumed and the very close quarters, fights rarely break out on the vessel. According to Sixthman, a regimented company that prides itself on running the tightest of ships, the Outlaw Cruise is one of their most well-behaved. It’s also the first themed voyage that kicks off a string of nine consecutive cruises for the company this year, including the Americana-focused Cayamo Cruise, Sister Hazel’s Rock Boat cruise, Kesha, Kiss and 311 excursions, and trips in celebration of zombies and the cult TV show Trailer Park Boys.

“Ninety-nine percent of the time, no matter what the community is — country, rock, pop, Latin — we don’t have any problems,” says Anthony Diaz, Sixthman’s chief executive officer. “It’s the difference between a community and a concert.”

The Outlaw Country Cruise is certainly that, an undeniable community made up of mostly 50-somethings, split evenly across gender, that stages its own family reunion every winter. This year, 53 percent of those sailing have been on the cruise before. For the most part, they gather for the music and camaraderie, while others just need a break from reality. “I came for the beer,” one cruiser in a Bottle Rockets T-shirt from Little Rock, Arkansas, tells me. He’s on his first Outlaw Country Cruise and brought along his wife. Another couple is escaping into a full-on pirate fantasy, complete with a bustier and wooden sabre, part of the ship’s dress-up night, while another just can’t seem to leave his politics at home. “Party like W, Dress Like JFK, Think Like Reagan,” his T-shirt reads.

But opposing politics don’t weaken the bond among the cruisers, even when one of the acts they’ve paid to see, Drive-By Truckers, aren’t afraid to mince words onstage or via their own sartorial choices. During his solo acoustic set, DBT’s Mike Cooley prefaces a biting “Surrender Under Protest” with a tale about Confederate sympathizers who can’t let go of their Southern heritage, while his bandmate Patterson Hood walked the boat with a pro-Mueller Investigation pin on his jacket.

Tepper says the “outlaw” tag is as a catch-all for anything that goes against the norm. “It means something different to everyone,” he says, preferring to view it in musical terms. “On both the cruise and channel we draw from a variety of food groups: rockabilly, honky-tonk, the country-rock of the Byrds/Dylan variety, cowpunk, alt-country, all the way through to today’s Americana artists.”

On the final night of the cruise, after the Drive-By Truckers roared through a set in the ship’s notoriously listing Stardust Theater and Jennings sang about getting “D.R.U.N.K.” in the Spinnaker Lounge, a crowd of die-hards moves to the smaller Atrium stage nestled in the center of the ship. The bar is bustling and those left are feeling no pain. A man in a tight black shirt advertising the Eighties band Junkyard is alternately flexing his muscles and pointing at his chest to no one in particular. Nixon is ordering more drinks. Baird and his band Homemade Sin take the stage as the last live show of the cruise, which is just hours from docking in Tampa for an early-morning disembarkment. The ship has to be turned over, restocked and sanitized before Rock Boat bands and cruisers can board.

“We’re the last chicken in the shop,” Baird hollers, launching into a set of gems like “Shake, Rattle & Roll” and the Georgia Satellites’ “Keep Your Hands to Yourself.” “This song’s been very, very good to me.”

The same can be said of the Outlaw Cruise itself. It’s that rare gig that artists at all stages of their careers can bank on, playing for a truly captive audience — Margo Price calls it “party prison.”

Earle, who served time in jail in 1994, can’t grasp how some of his peers go stir crazy.

“I had somebody, an artist, a pretty famous guy who I really respect, on the very first Outlaw. I said, ‘How you doing?’ He said, ‘I feel kind of trapped,'” Earle says with a pause and a laugh. “I said, ‘I was locked up for a little while — this ain’t trapped, this is a cruise.'”