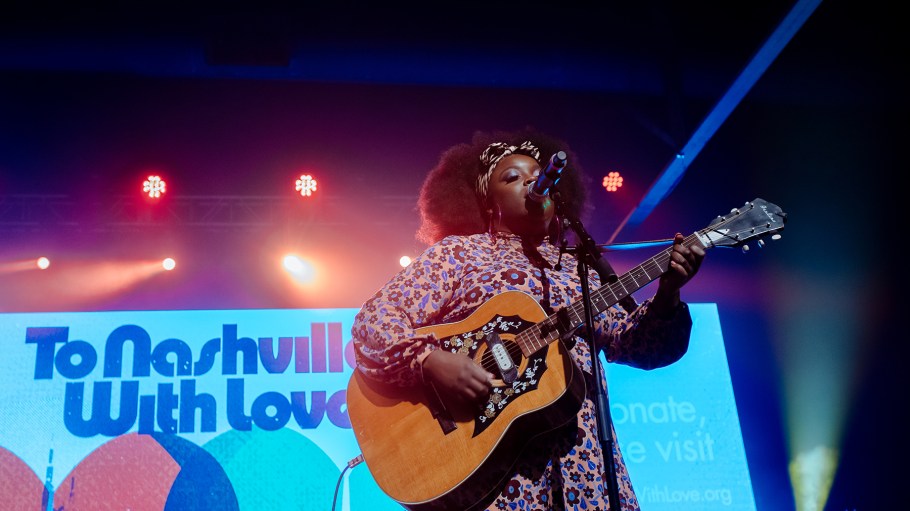 “You can dance in a hurricane, but only if you’re standing in the eye,” Brandi Carlile and Tim and Phil Hanseroth sang onstage at Nashville’s Marathon Music Works on Monday night. The Seattle-based musicians flew in especially to perform at the To Nashville, With Love tornado relief benefit concert and, with songs like “The Eye,” helped take back the power of last week’s natural disaster and transform it into something healing.

If you listened closely, either in the venue itself or via the livestream, lyrical references to strong, sometimes harsh winds were abundant. Carlile alluded to their power to scatter the haters in her staggering performance of “The Joke,” Ashley McBryde sang of “waiting on the wind to take you home” in “Sparrow,” and Jason Isbell nodded to their transformative nature in “24 Frames.”

Old Crow Medicine Show opted for the more direct approach: they recast the folk song “Minglewood Blues” into a euphoric rave-up warning tornadoes not to mess with the 615 area code. Even when Old Crow adjunct member Charlie Worsham sang about hanging his head when he saw the decimated club the Basement East, it was followed by a blast of optimism — “But the sign still said ‘In Nashville I Believe,'” an acknowledgement of the “I Believe in Nashville” mural that survived the building’s collapse.

Such hope and perseverance was the underlying theme of the benefit, which raised an estimated $500,000 to be dispersed to disaster relief efforts and mental health organizations. Hosted by club owner and promoter Mike Grimes, co-owner of the Basement East, and Lightning 100 DJ Lt. Dan, the all-star concert came together in just six days, an only-in-Nashville feat pointed out by many of those taking the stage. Carlile said she received a call the day after the tornado from the team of U.K. soul singer Yola, who were integral to organizing the event and the To Nashville, With Love fund.

Both behind the scenes and onstage, Yola herself was a revelation. She joined Dan Auerbach, Aaron Lee Tasjan and Natalie Hemby for a cathartic “It Ain’t Easier,” off her Auerbach-produced album Walk Through Fire, and then manifested compassion with a stunning take on Marvin Gaye’s “You’re All I Need to Get By,” before sticking around to recreate the “Highwomen” theme with Carlile, Hemby, and Sheryl Crow. By the show-closing jam, an Isbell-led version of Neil Young’s “Rockin’ in the Free World,” she was sharing a mic with Kendell Marvel.

“I was like, ‘We need to be doing something,'” she told Rolling Stone backstage, recounting how she and her manager Charlie Pierce birthed the concert. “Me and Charlie are talking, and Charlie’s like, ‘I’ve had a crazy idea.’ I’m like, ‘Oh god, she’s had a crazy idea. It’s going to spiral into something really massive.'”

In truth, the idea had to be massive in order to match the amount of work required to recover from the March 3rd tornado, which killed 24 people across Middle Tennessee, and damaged nearly 600 homes and businesses in Nashville — a city that if not home to all of the performers last night, is a cornerstone of their artistic lives.

“I didn’t know I was being accepted anywhere until I slowed down and noticed the people that were embracing me instead of the people that were rejecting me,” Carlile said backstage. “When I realized how much of that was happening in Nashville, I started to feel like it was home to me.”

Anti-Vaxxers Are Flipping Out Over Justin Bieber's Facial Paralysis

‘What the F-ck Is This?’: Team Trump Blindsided by Jan. 6 Committee Getting Doc Footage