When Midland announced that they would be playing a one-off show at the Palomino in October 2019, the North Hollywood venue hadn’t been operational for nearly 25 years. Though the original structure is still standing, the former country-music hot spot on Lankershim Boulevard now serves as a rentable banquet space for birthday parties and quinceañeras.

“They essentially moved a honky-tonk into that building, which is as un-honky-tonk as you get,” says Midland guitarist-vocalist Jess Carson, joined by singer Mark Wystrach and bassist-vocalist Cameron Duddy a few months later at their label’s Nashville offices.

The old Palomino building will get to retain some of its beer-soaked, neon-lit aura in perpetuity on Midland’s forthcoming document of that evening, Live From the Palomino. Due out February 28th, the concert LP attempts to reanimate the spirit of the Palomino with 10 tracks originally featured on Midland’s two full-length albums, catching the group when they felt like they were in peak live form.

“That was us coming off being on the road pretty much continually with this seven-piece setup,” says Wystrach. “Just hitting the road hard. At that place and time, we were just ice cold. We were in the pocket. We were confident. We were having a good time. That show was loose and really tight at the same time.”

Opened in 1949, the Palomino was the premier Los Angeles destination for country music during its run, hosting Johnny Cash, Buck Owens, Linda Ronstadt, and the Flying Burrito Brothers, among many others. In the early Eighties, Dwight Yoakam held court there alongside cow-punk favorites like Lone Justice and the Blasters, updating his version of the Bakersfield sound for the rock- and punk-loving patrons.

“He was the torchbearer of coming out of that era and talking about that era and paying homage to that era in his recordings,” Duddy says. “[It was] partly through Dwight and his music and also partly because we all did spend time in L.A. I was actually born there. We met each other there. We lived there for a decade.”

“The Palomino was cool because it was country-centric but all the guys that balanced the line of rock & roll and maybe on the soul side of things — big influences of ours — [were] coming out there and playing shows,” Wystrach adds. “It was a place people wanted to play. And everybody did, from Waylon [Jennings] to Elton [John] to Dwight Yoakam, you name it. The cast of characters who came through there, it was historic.”

In a new video for a live rendition of “Cheatin’ Songs,” Midland are sweat-drenched and within arm’s reach of the VIP crowd, and the clip also gives glimpses of the restored Palomino sign — on loan from the Valley Relics Museum — and a Pontiac designed by Nudie Cohn, the Rodeo Tailor. But the audio is all them — loose and confident, sliding into their three-part harmonies with ease.

“It was like it was locked in the walls or something deep back, all that voodoo and that magic that had happened and the lore,” says Wystrach. “Once they turned the lights down low and the fans and the press and whoever else was there, came in, and the beer started flowing, once the music started, it snapped — for that brief two hours, it was the Palomino. That raucous, Wild West honky-tonk feel was really in there.” 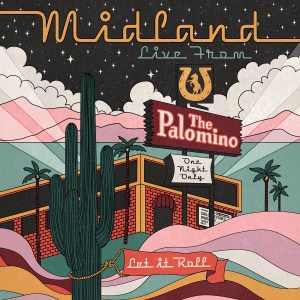 In 2020, Midland will go on to play bigger stages, including opening the Houston Livestock & Rodeo on March 3rd, headlining a series of shows in their adopted home of Texas, and supporting Tim McGraw on the Here on Earth Tour all summer long. But for one glorious night last October, they rewound the clocks and inserted themselves into a lineage of country’s all-time greats.

“In a way, it is like time traveling,” Carson says. “The Palomino Club is in the list of places we have played. Who else can say that, that’s our contemporary? We were able to re-write history by moving the Palomino back into that building for one night.”

“We are the first time-traveling country music band, is what I’m trying to say,” Carson agrees, grinning.

“We did 88 miles an hour all the way to Palomino, if you know what I mean,” Wystrach says, waiting a beat before he quips, “That’s a Back to the Future reference.”