On Friday evening, dobro player Jerry Douglas stood side stage at MerleFest and marveled watching Tyler Childers play the headlining slot in front of a capacity crowd numbering in the tens of thousands.

“It’s great to see all these new artists here,” Douglas says. “You know, Tyler used to come and watch this thing. So did Zac Brown and the Avett Brothers. And they’ve all eventually headlined here. It’s a sacred place to play — it’s a badge of honor.”

Childers, the rapidly-rising Americana/country star, played to a roaring audience on the campus of Wilkes Community College, located in Wilkesboro, North Carolina. With a motto of “Where the Mountains Begin,” the town sits on the eastern slope of the Blue Ridge Mountains.

Brandi Carlile on Busking With Dave Grohl: 'It Was Pretty Surreal'

Started in 1988 by the late Doc Watson, the event is named after his son, Merle, who died in a 1985 tractor accident. Doc, the iconic blind guitar guru, felt the need to hold a festival, partly as a fundraiser for a garden for the blind he had hoped to build on the campus.

“I was here at the very first festival, playing on the back of a flatbed truck. And Doc handpicked everybody that first year — Chet Atkins, Earl Scruggs, Marty Stuart and so on,” Douglas says. “Those of us who have been coming every year have seen this festival expand, opening its eyes and ears. MerleFest is definitely on every musician’s bucket list.”

Here are the 10 best things we saw at this year’s gathering in the mountains.

Peter Rowan and co. moan the blues.
Featuring musicians who have performed at every single MerleFest, the Veterans Set is the official kickoff to Saturday. Peter Rowan, Jerry Douglas, Sam Bush, T. Michael Coleman, Jack Lawrence and Joe Smothers (and also Scott Vestal) combine decades of bluegrass talent and lore within a fast-paced 45-minute set of oldies and goodies. Bush led “I’ve Got the Nashville Blues,” while cosmic cowboy Rowan dusted off “The House of the Rising Sun,” before the players swayed into B.B. King’s “The Thrill Is Gone,” which then morphed into Screamin’ Jay Hawkins’ “I Put a Spell on You.” “When we started out, bluegrass [was] called the bastard step-child of country music,” Rowan says, “but bluegrass is a fantastic combination of blues, gospel and even country — it’s really a universal music.”

Molly Tuttle reinforces her star status.
The reigning two-time International Bluegrass Music Association Guitar Player of the Year and Americana Music Honor & Awards’ Instrumentalist of the Year, Tuttle represents the preservation and perpetuation of both genres. Her soothing tone, both in voice and guitar, is a breath of fresh air, but also a window into a rich and vibrant melodic past — one of pride, passion and pursuit of the basic wants and needs of human emotion through instrumentation. At MerleFest, her set nodded to the event’s founder. “I remember getting to see Doc Watson when I was a kid and he really inspired me to work on my own flatpicking and singing,” Tuttle says. “Playing on the Watson Stage, I was thinking about Doc playing on that stage.” 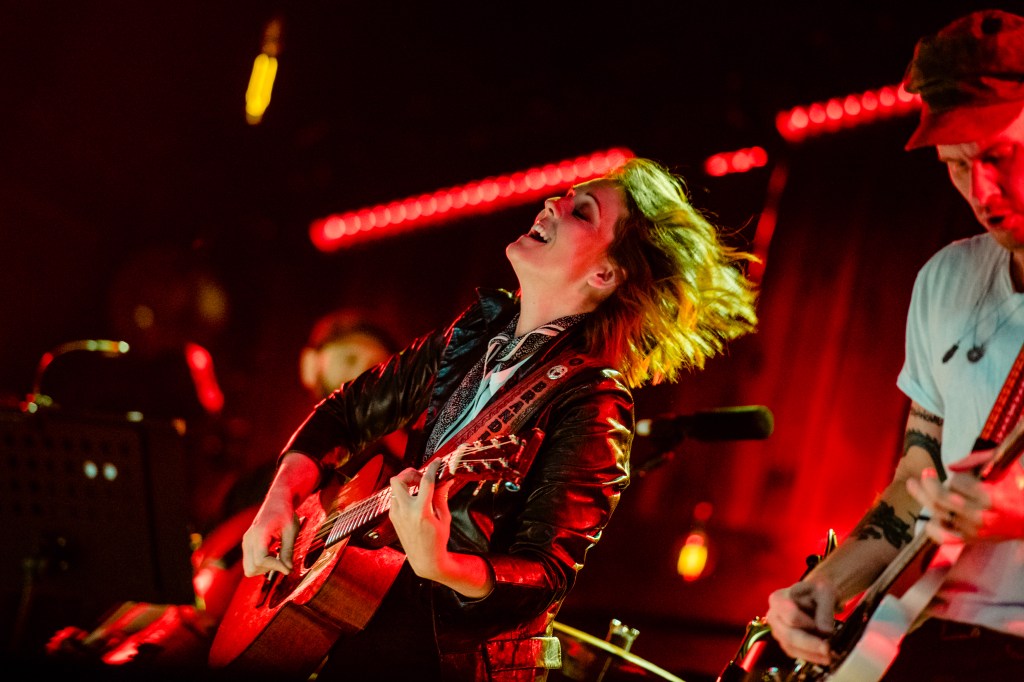 Brandi Carlile covers John Denver, encores with the Avetts.
The biggest name in Americana music over the last year, the singer-songwriter stormed the stage with a smile as big as her sound. Gliding through her rocking set, Carlile’s performance of the Grammy-winning song “The Joke” was especially powerful, with her staggering howl echoing far and deep into the mountains surrounding the Watson Stage. She also offered a spot-on mashup of John Denver’s “Take Me Home, Country Roads” and “Rocky Mountain High,” before creating a legendary MerleFest moment: an encore of “Murder in the City” with the song’s writers, Seth and Scott Avett, singing around a single microphone. “I like to have a good time and I like to drink whiskey onstage and have rock & roll moments,” Carlile says. “But what I really like to do is incite empathy in other people, and in myself. It’s a catharsis for me to be able to tap into that.”

The Gibson Brothers challenge bluegrass with an indie sound.
With their Dan Auerbach-produced alt-country/indie release Mockingbird, the Gibson Brothers raised an eyebrow in the bluegrass world by switching from acoustic to electric instruments, discovering a sound that’s ’68 Elvis meets the Everly Brothers. The result was a new creative life for the two-time IBMA Entertainer of the Year winners, who delivered tracks off the album for an engaged MerleFest crowd. Says guitarist-singer Leigh Gibson: “You have to evolve as an artist, and having to learn music in this sort of fashion in the Mockingbird band has brought a lot of energy to our band and our songs.”

Tyler Childers sings of hard luck and trouble.
Opening his much-anticipated MerleFest debut on Friday night with “Whitehouse Road,” the Kentucky singer-songwriter held the audience in his grasp, commanding their attention with a gravelly wail that stirs up more than just tears and long forgotten memories. “I got people trying to tell me Red/Keep this living and you wind up dead/Cast your troubles on the lord of lords/Wind up lying on the cooling board,” he sang. But aside from his captivating performing style, the genius of Childers is that he figured out early on the key to penning a timeless song — write what you know. For him, that’s the hard truths of a hardscrabble life and the notion that even if the deck is stacked against you, it’s you who decides your fate.

Steep Canyon Rangers celebrate the songs of their home state.
Before the Rangers hit the stage Sunday afternoon, North Carolina Governor Roy Cooper took the microphone to introduce the band, and also make note of the state recognizing 2019 as the “Year of Music.” As a salute to Cooper’s initiative, the Asheville, North Carolina-based group played a one-off set of covers by North Carolina artists, which included hauntingly beautiful renditions of James Taylor’s “Sweet Baby James” and Doc Watson’s “Your Long Journey,” a beloved tune written by his wife, the late Rosa Lee Watson.

The Earls of Leicester nod to Flatt & Scruggs.
Three-time IBMA Entertainer of the Year winners, the Earls maintain the legacy of bluegrass greats Lester Flatt, Earl Scruggs and the Foggy Mountain Boys. Though the songs are over 70 years old, the melodies are timeless and yet somehow receive new life in the hands of players like Jerry Douglas and Shawn Camp, who layer songbird vocal tones over intricate instrumentals. Onstage, the Earls were dazzling, driven forever forward by Douglas’ lightning-fast Dobro work and decades of bluegrass spirit. 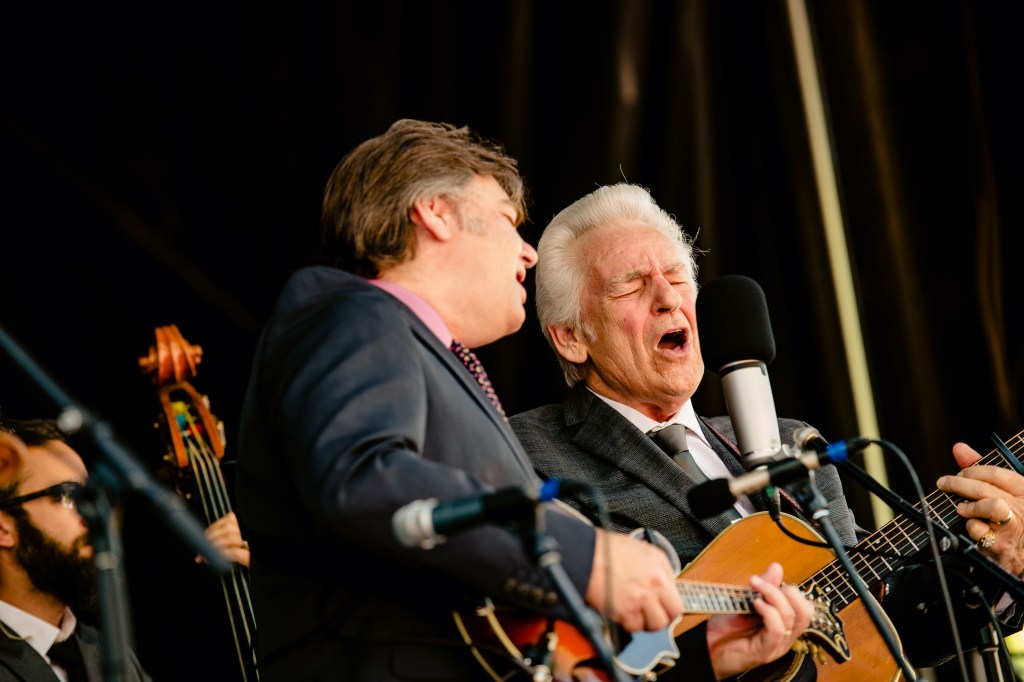 At 80, Del McCoury doesn’t miss a beat.
A pillar of bluegrass music and the true torchbearer of that “high, lonesome sound,” Del McCoury took the Hillside Stage on a blazing hot Sunday afternoon. Never once losing a step, the quintet, which includes McCoury’s sons Ronnie and Rob, swirled around the microphone, with tunes like “Nashville Cats” radiating out across the hills. Del McCoury is bluegrass greatness personified, a fact not lost on the audience, who recognized that McCoury’s showmanship and playing remains as razor-sharp as his distinctive tenor voice after more than 60 years of touring.

The Avett Brothers celebrate a homecoming.
Closing out MerleFest late Sunday afternoon, the Avetts roared onto the Watson Stage, opening with “Black Mountain Rag” before pushing heavenward with “Distraction #74” and its audience singalong: “And I knew it/I never should have turned the wheel/And I knew it/The voices calling me were real.” Scott Avett built on that commune with the fans, later hopping into the audience and wandering the aisles to thank any and all within reach, a nod to this being a homecoming show of sorts for the North Carolina natives, who first played MerleFest in 2004. “[Back then, Merlefest] was pivotal because that year I made the comment if we didn’t get MerleFest, then I would go back to art school,” says Scott Avett.

The presence of Doc looms large over the Watson Stage.
Aside from all of the musicians and music freaks in every direction, it’s Doc Watson that remains the core of MerleFest. His presence is felt throughout the grounds, especially on the Watson Stage, with each artist who stands there paying tribute to Watson and the unparalleled sense of community he created those many years ago. “I get here and I feel Doc and Merle. I miss them when I’m here. And that’s what keeps me coming back,” says mandolin great Sam Bush. “As a musician, [Doc] led by example. It was the kindness and generosity he showed all of us, and how open his mind was to other music.”