Musicianship was the theme of the evening for the second of Marty Stuart’s three Artist-in-Residence performances at the Country Music Hall of Fame and Museum on Wednesday. Titled “Psychedelic Jam-Bo-Ree” and featuring a multi-generational cast of guests, the emphasis felt tilted slightly more “jam” than “psych,” with Stuart and his band the Fabulous Superlatives flexing their instrumental chops.

In a way, the show was akin to Stuart’s annual Late Night Jam, held each June at the Ryman Auditorium during CMA Fest. That show mirrors the format of an old radio program, with a wide variety of performers and even the Grand Ole Opry square dancers making an appearance. On Wednesday, the square dancers were joined by go-go dancers, along with Old Crow Medicine Show, country great (and Stuart’s wife) Connie Smith, and Chris Hillman and Roger McGuinn from the Byrds.

Stuart’s Artist-in-Residence performances continue with a songwriter-themed show on September 25th featuring John Prine and Brandy Clark. Here are the five best things we saw from the Psychedelic Jam-Bo-Ree.

Fabulously Superlative Guitar Duo
Stuart and Fabulous Superlatives member Kenny Vaughan make for a thrilling collision and combinations of skill when they both have guitars strapped over their shoulders. On a ferocious rendition of “Tear the Woodpile Down,” they dove off in different stylistic directions, with Vaughan firing off some searing blues licks and Stuart sticking to string-bending country twang, while on “Old Mexico” — from Stuart’s excellent Way Out West — Stuart kept a steady acoustic rhythm and sang while Vaughan created the vibe with some eerie, tremolo-effect doodles.

Buck Up
Instrumentalist Buck Trent gave a lesson in showmanship and the sonic possibilities of the banjo during his brief guest appearance. In a flashy, rhinestone-covered jacket — like many of the performers onstage last night — the former member of Bill Carlisle’s band and Porter Wagoner’s Wagon Masters mugged and posed as he showed off some of his signature licks on tunes like Wagoner and Dolly Parton’s “Holding on to Nothing” and the original “Until Dawn.” His banjo, electrified and lightly distorted, frequently took on the character of other instruments, evoking an electric lead guitar with his rhythmic riffing, or pedal steel with some staccato picking and precision twists of his tuning pegs. Far out! 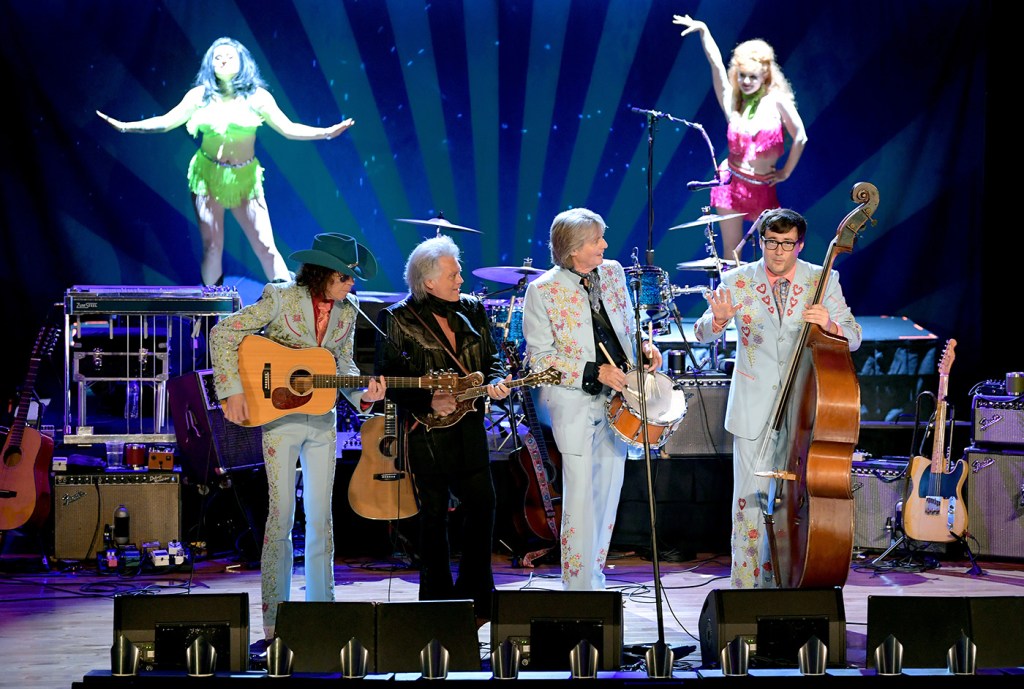 Photo: Jason Kempin/Getty Images for the Country Music Hall of Fame and Museum

“Wipe Out” Country Style
Stuart nodded to some of the surf-rock influences that permeated Way Out West with a delightful cover of the Surfaris’ “Wipe Out” around one microphone. Noting it was the “country” version of the song, Fabulous Superlatives member Chris Scruggs led the charge with a bassline that was doing a lot more running than walking, while Stuart and Vaughan kept up the manic, wave-riding energy on their guitars. But the breakout star was drummer Harry Stinson, who paused his tumbling tom-tom patter to provide what can only be described as a cheek-slapping mouth-percussion solo.

Old Crow Worsham Show
Though he may not be a permanent addition to the band, Charlie Worsham fits right in with the Old Crow Medicine Show guys, with whom he’s been touring. On Wednesday, they let the Mississippi native sing his gutsy, hilarious weed endorsement “I Hope I’m Stoned (When Jesus Takes Me Home),” a longtime live staple that he recently released. Old Crow Medicine Show’s Ketch Secor, giving a shout out to recently deceased New Lost City Ramblers musician and folklorist John Cohen, then tore into “Wagon Wheel,” for which Stuart returned to the stage with an enthusiastic dance. What a journey that song has had: from slightly anachronistic acoustic country tune to bar-band standard to chart-topping country hit to a stage at the Country Music Hall of Fame.

Flight of the Byrds
Even with a full guest list, Stuart somehow managed to stuff a short set from the Byrds’ Roger McGuinn and Chris Hillman into his two-hour Artist-in-Residence show. McGuinn and Hillman, whom Stuart and the Fabulous Superlatives previously joined for the 50th anniversary celebration of the Byrds’ country-rock landmark Sweetheart of the Rodeo, got to play a full eight songs, including lovely renditions of Bob Dylan’s “My Back Pages” and “Mr. Tambourine Man,” alongside the country rhythms and steel of Sweethearts chestnuts “You Don’t Miss Your Water” and “You Ain’t Going Nowhere.” Stuart and His Fabulous Superlatives also chimed in with McGuinn and Hillman for the cascading harmonies of jangle-rock masterpieces like “I’ll Feel a Whole Lot Better” and “Turn! Turn! Turn! (To Everything There Is a Season,” the latter of which got the entire theater up out of the seats. It may not have exactly been psychedelic, but it was certainly sublime.