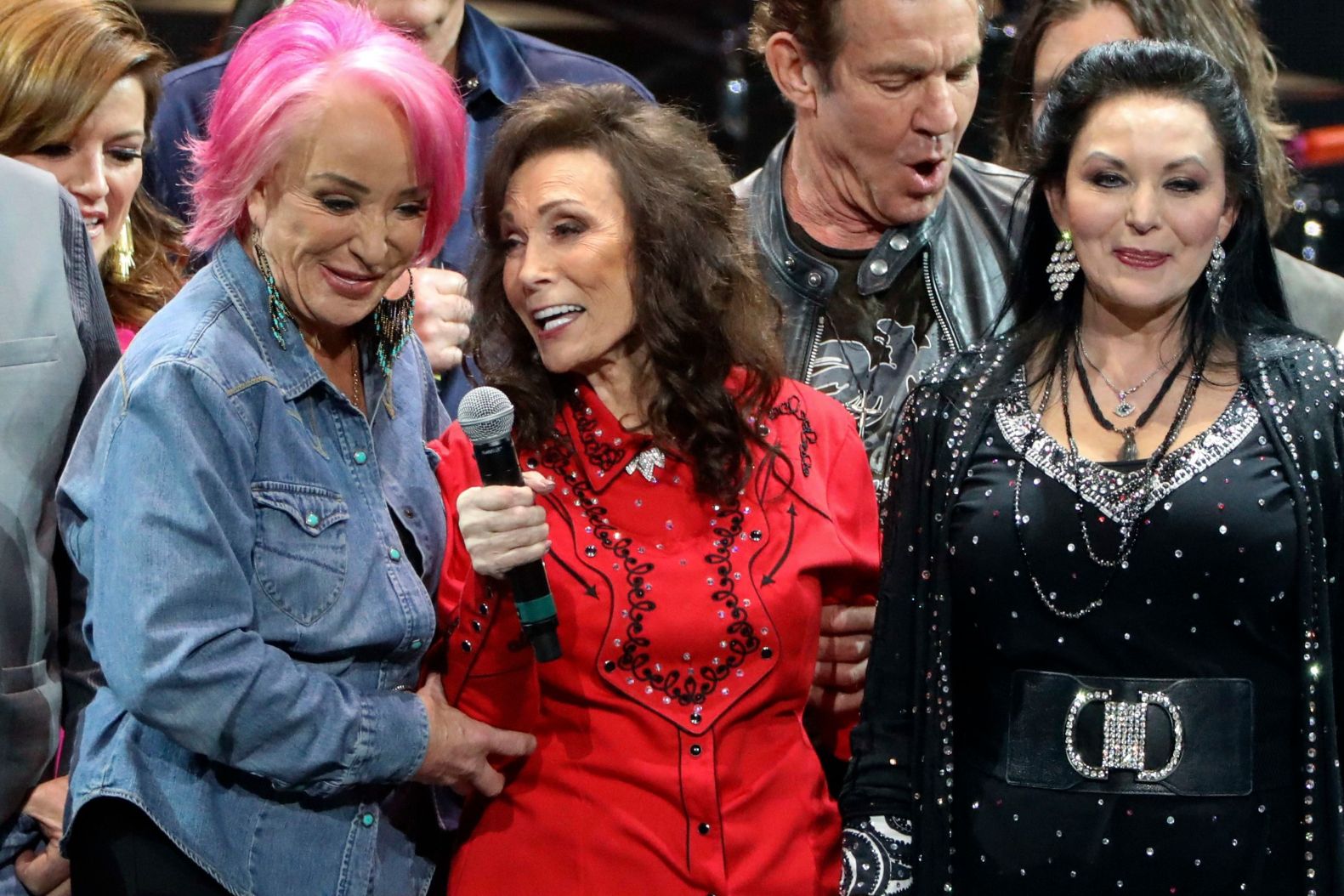 For the finale of the Loretta Lynn birthday concert in Nashville on Monday night, the majority of the all-star cast returned to the stage to sing “Coal Miner’s Daughter,” a motley crew of Tanya Tucker, Brandi Carlile and Dennis Quaid all gathered around the guest of honor. It was a tenuous moment, with the soon-to-be 87-year-old Lynn emphatically shaking off her sister Crystal Gayle’s overture for her to sing her signature song. “I don’t wanna,” Lynn said.

But then, at the start of the second verse, Lynn seized the moment. Chalk it up to muscle memory or some higher power, but the Country Music Hall of Fame member, who is still visibly recovering from a 2017 stroke, proceeded to deliver each line of her 1970 musical autobiography. The crowd in Nashville’s Bridgestone Arena ate it up, reaching fever pitch as she hit that crescendoing declaration: “Yeah, I’m proud to be a coal miner’s daughter.”

When the performance ended, Lynn was clearly exhausted, as if any energy reserve she had maintained throughout the nearly three-hour concert — which she watched surrounded by well-wishers from a chair at sidestage — had been depleted. Quaid, an inexplicable but ubiquitous presence on Monday night, stepped in to help escort her offstage.

If this proves to be Lynn’s last public performance, it was one that won’t be forgotten. Much like the bulk of the all-star celebration, a concert that boasted star turns by three Hall of Famers in George Strait, Alan Jackson and Garth Brooks; the debut of the Highwomen supergroup; and a wicked rock-god moment by Jack White, whose “Portland, Oregon” with Margo Price left many in the primarily old-school country crowd wondering what they had just witnessed.

The same can be said of Brandi Carlile’s performance of “She’s Got You,” which Lynn cut for her 1977 Patsy Cline tribute album. Arguably the stunner of the evening, Carlile’s delivery was pristine and impassioned, singing with an emotion that left her physically shaking. Regaining her composure, she introduced a pink-haired Tucker, whose upcoming album Carlile produced with Shooter Jennings, and accompanied her on piano for the new song “Give Me Flowers While I’m Living.” It was a sentiment shared by Lynn, who warmly accepted flowers at the culmination of the song from Price.

Tribute shows can often be lumbering beasts, overwhelming with too many artists, but this one excelled because of its agility and diversity, recruiting Americana songwriters like Carlile and Price alongside mainstream country stars like Keith Urban and Darius Rucker — with talent as the underlying theme. While some of the artists may not have a current hit on country radio, they represented the best of Nashville. Randy Houser’s haunting “Wouldn’t It Be Great” was flawless, Price’s rendering of “One’s on the Way” was especially personal (she’s eight months pregnant), and Kacey Musgraves’ “You Ain’t Woman Enough (To Take My Man)” displayed the versatility that has made her a Grammy favorite.

The night’s house band was equally star-studded. Led by Dave Cobb (who, playing a mean shaker, could step in for the English brothers in Willie Nelson’s Family Band), the group included guitar heroes Charlie Worsham and Leroy Powell, and pedal-steel great Paul Franklin. As a unit, they helped transform Cam’s underappreciated “Rated X” and Darius Rucker’s surprise interpretation of “The Pill” into roadhouse rave-ups, adding an extra dose of energy into an already spirited night.

But in the end it was the image of Lynn powering through “Coal Miner’s Daughter” that is most indelible. Her official birthday may not be until April 14th, but on Monday, she celebrated the pure strength of will.