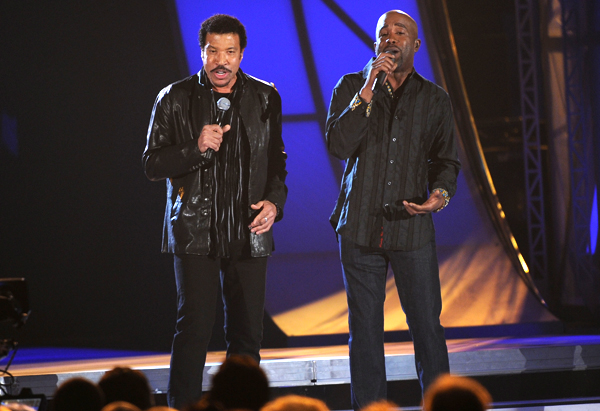 Lionel Richie will go back to his roots in Alabama with Tuskegee, a new album due March 27th that will reprise 13 of the singer’s biggest hits in duets with country stars including Tim McGraw, Blake Shelton, Kenny Chesney, Jason Aldean and more.

The album will feature new versions of “Say You, Say Me,” “You Are,” “Sail On,” “Hello” and other highlights of the singer’s multi-platinum career. Other stars set to appear include Sugarland’s Jennifer Nettles, Rascal Flatts, Darius Rucker and Shania Twain, as well as veterans Kenny Rogers, Willie Nelson and Jimmy Buffett. Richie and friends will also tape a concert special on April 2nd in Las Vegas, and it will air at a later date on CBS.

Richie clearly loves Tuskegee, his hometown; he said in a statement, “[The city] is where I learned about life and love and the power of music, and the place I built a musical foundation that knows no genres or boundaries.” Richie is already something of a fixture in the country world, with his frequent appearances on the Country Music Association Awards programs. His songs having been covered by stars such as Kenny Rogers and Conway Twitty.