The prison song is a staple of country music. From Johnny Cash’s “Folsom Prison Blues” to Merle Haggard’s “Mama Tried,” tales of hard luck and hard time have grown to be some of the genre’s most evocative songs.

On his debut album Down in the Hole, Kiefer Sutherland tried his hand at writing one, turning out the Tom Waits-esque lament “Shirley Jean.” The tune tells the story of a man’s last night on death row, taking the form of a goodbye letter to a woman he once loved.

“It was the one song on the album that obviously was not a very personal story from my own life,” Sutherland tells Rolling Stone Country. “I had a huge respect for Johnny Cash, Waylon Jennings, Merle Haggard. These guys wrote about the dirtier side of life and the tougher aspects of life.”

Sutherland has long drawn parallels between Cash’s story and his own, noting that they each had spent time on the wrong side of the law during their lives. For Cash, his experiences helped him develop a special kinship with inmates.

“He realized he wasn’t a ‘bad guy,’ and that maybe some of these people in prison aren’t ‘bad guys,'” Sutherland says of Cash. “He gave them a kind of dignity that I really respected. He created an avenue of forgiveness that I don’t think was as available at that time. I love the way he did that. So I really wanted to write a song about that.”

In a new video for “Shirley Jean,” Sutherland doubles down on that idea of portraying prisoners as human beings with inner lives, offering a fairly literal interpretation of the song in which a condemned inmate is shown in the last hours of his life. To play the part of the prisoner, Sutherland recruited actor Robert Knepper, a longtime friend known for his fan favorite role of “T-Bag” on the Fox drama Prison Break.

“He and I have known each other for over 25 years,” Sutherland says of Knepper. We did a film called Renegades together with Lou Diamond Phillips way back in the Eighties. He has a face that – he can emote without a word as well as, if not better than, any actor I know. The video is completely anchored on him.”

The video, which ends with Knepper’s character in the electric chair, feels especially timely in the wake of current events, as two inmates in Arkansas were executed on Monday after a contentious legal battle. Sutherland explains that he’s “not a huge fan of the death penalty,” but does make a point of noting that it’s a “really complicated” issue, with his objections pertaining more to the imperfections of the judicial system than they do to the severity of the actual crimes committed by those on death row.

“My problem with the death penalty extends to two issues,” Sutherland says. “There are certain religions in the world that really cannot accept this concept of ‘eye for an eye.’ I think as a society, if we’re doing this in the name of the state of California, or in the name of the state of Arkansas, we have to take those things into consideration.

“I’ve also been here in Los Angeles, California, for the last 20 years and there have been nine people taken off of death row because of DNA evidence that has proven their innocence. We were wrong,” he continues. “To give such an absolute punishment when we are not an absolute people, I just don’t agree with such a conclusive ending given such a less than perfect judicial system.”

Sutherland finds himself embroiled in politics on a near daily basis, as his current gig as an actor is playing the president on the ABC drama Designated Survivor, an interesting time for someone who once compared now President Trump to segregationist former Alabama governor George Wallace. It’s music, though, that seems to strike the truest chord in his heart, so much so that playing a gig at a small club can rattle his nerves far more than shooting a tense political scene. 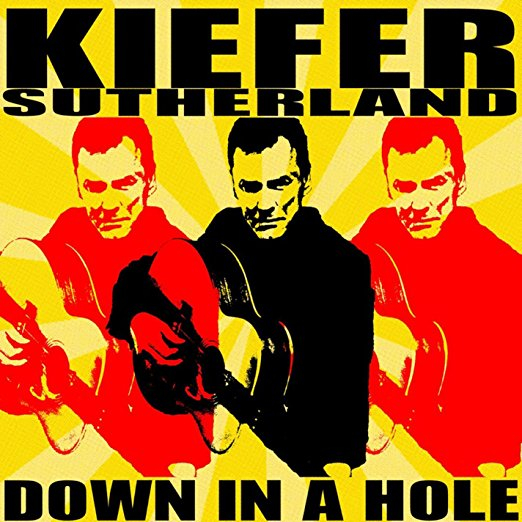 “I thought certainly, two years ago when I started playing shows, that 30 years of acting experience was going to help me there,” he says. “And it wasn’t. In fact it was the opposite. It took me a minute to realize, because I got so nervous that I had to actually ask myself, ‘Why are you doing this?’ But the truth is that I love to tell stories. It was so simple. For 30 years I got to hide behind a character, and all of a sudden here I am on stage playing a song about losing someone. For the first time in my life, I wasn’t hiding behind a character.”

That realization gave Sutherland, who performs at the Stagecoach Music Festival on April 30th, a new appreciation for shared experiences, both the kind that inspired the story of “Shirley Jean” and those that are able to bridge ideological gaps between two seemingly different people.

“Whatever preconceived notions I had going into [a concert], at the end of it, I think we have realized that we have a lot more in common that we might have thought,” he says. “Regardless of how successful you think I am, the things that we do have in common will be the moments where our hearts were broken, where we’ve lost people, where we haven’t fulfilled the best parts of ourselves. The songs that I’ve written communicate that I hope.”