Kiefer Sutherland gets the “why now?” question about music a lot. His answer is keenly simple: “Now, I just don’t give a shit.”

At 49-years-old, Sutherland, one of the most successful actors of his generation, is making his debut as a country singer-songwriter. But he’s far from a bandwagon jumper. The London-born, Toronto (by way of California)-bred star started playing violin at age four and has been honing his guitar skills since he was 10-years-old. He nurtured other recording artists’ careers via his own record label, Ironworks, which he co-founded with best friend Jude Cole more than a decade ago. And now, just as the Hollywood heavyweight has signed on for another primetime network gig, playing POTUS on ABC’s Designated Survivor, he’s simultaneously releasing his own music. It’s a résumé curveball, sure, but not really out of character.

Sutherland’s album Down in a Hole, named for a song he wrote about losing a close friend to alcoholism, will hit stores later this summer. The collection was produced — and spearheaded, really — by Cole, who heard some of Sutherland’s demo tapes meant for pitches to other artists and convinced his buddy to keep his self-penned tunes for himself. The resulting LP is full of introspective story songs informed by old-school country melodies and rock & roll edge, sung in the actor’s signature smoky rasp.

Rolling Stone Country caught up with Sutherland just before his Grand Ole Opry debut. He performed two tunes from Down in a Hole for the packed audience: his heartbreaking “Not Enough Whiskey” and cinematic “Shirley Jean,” which was inspired by a late legend who stood on that same stage many, many times.

“Johnny Cash wrote about men in prison and he managed to do that with a kind of dignity that I always thought was incredible,” Sutherland said, prefacing his own song about a man’s last night on death row. “I’ve never been to prison. . . I have gone to jail a few times in my life for doing some incredibly stupid stuff and I can tell you, the first thing you lose when you walk through those doors is your dignity. I always really appreciated [Cash] for that. Jude and I wanted to write a song that was an homage to that writing.”

Sutherland also paid tribute to one of the real-life inmates Cash was singing about, covering Merle Haggard’s “The Bottle Let Me Down” on the Opry. It turns out, he met the Hag just three weeks before his death, which he recalls in our candid interview.

I was revisiting your 2006 Rolling Stone cover story, where you talk a lot about your love for music. Do you still have 60-something guitars in your collection?
When I moved out of the [Los Angeles] studio, space was a premium. I moved back to New York and I didn’t want to be the guy who had 60 guitars in storage. I had bought them all to play. When they were all out, you couldn’t help it. Phenomenal guitar players would come to the studio and would get used to not bringing any of their gear. So I pared down a lot. And then I got to the point where if I saw a guitar I really liked, I’d have to get rid of another one. That became an interesting dilemma. I think at one point I had 70 or 75 guitars that were really beautiful, but I’m down to 15 or 20.

What’s your favorite?
I have an old Gibson Country Western that I’ve been playing on the last two tours. And I have an old Les Paul and a Tele that I made specifically for what I like to do.

Who taught you?
Liona Boyd, who is certainly my favorite classical player, her teacher was my teacher up in Toronto. I played violin from the time I was four ’til I was 10. I wanted a guitar when I was seven, but my mom said, “If you play violin until you’re 10, then I’ll get you a guitar.” Then she got me a guitar and I don’t think I picked up another violin ’til I was in my twenties.

The first job I did as a professional actor was called Throne of Straw at the Odyssey in Los Angeles. And I would not have gotten that job had I not been able to play violin, because I played violin at the end of the first act and top of the second act.

Down in a Hole stemmed from two songs you wanted to pitch to other artists. What were those two songs, and who convinced you to keep them?
“Calling Out Your Name” was one and the other song is not on the record. With “Calling Out Your Name,” I really liked the way that turned out and it’s really a personal story to me: There’s always that moment when you lose the wild innocence of youth; something knocks you over the head — and for most people I know, it’s a relationship. Mine was no different. I really expected a lot of things in my life to be different and all of a sudden this happened, and I was caught off guard. When I wrote this song, a few years back, it put an end to that. I finally felt all right about it.

So did it turn out these songs were too personal to give away?
No, I think it would’ve been a relief! [Laughs] One of the things that surprised me the most is that when we went to play our first show, I’d go to explain where a song came from and I didn’t realize how personal that was gonna be — how open you have to be to try and make that work. But I really enjoyed it. We were playing bars with 250 to 300 people and there was something nice that happened at the end: the audience would understand that there’s not that much different between you and me, regardless of what their perception was when they walked in. The songs did that.

Was your confidence performing live a slow build, or was there one pivotal moment?
I played in a cover band for three years, close to 200 shows. But what was that show [turns to bandmate Joseph De La O], Joseph – you and I were scared? [Joseph answers with a laugh, “Which one?!”] We played a show in Halifax, and were going to open up for Dwight Yoakam. The first show, we were both nervous and Joseph is such a brilliant player that it made me feel really good that he was nervous. But now it’s trying to figure out how to seize an opportunity and really drive a show home. The difference between a great show and a show we’re not that thrilled with is getting very small. That’s a nice place to be. 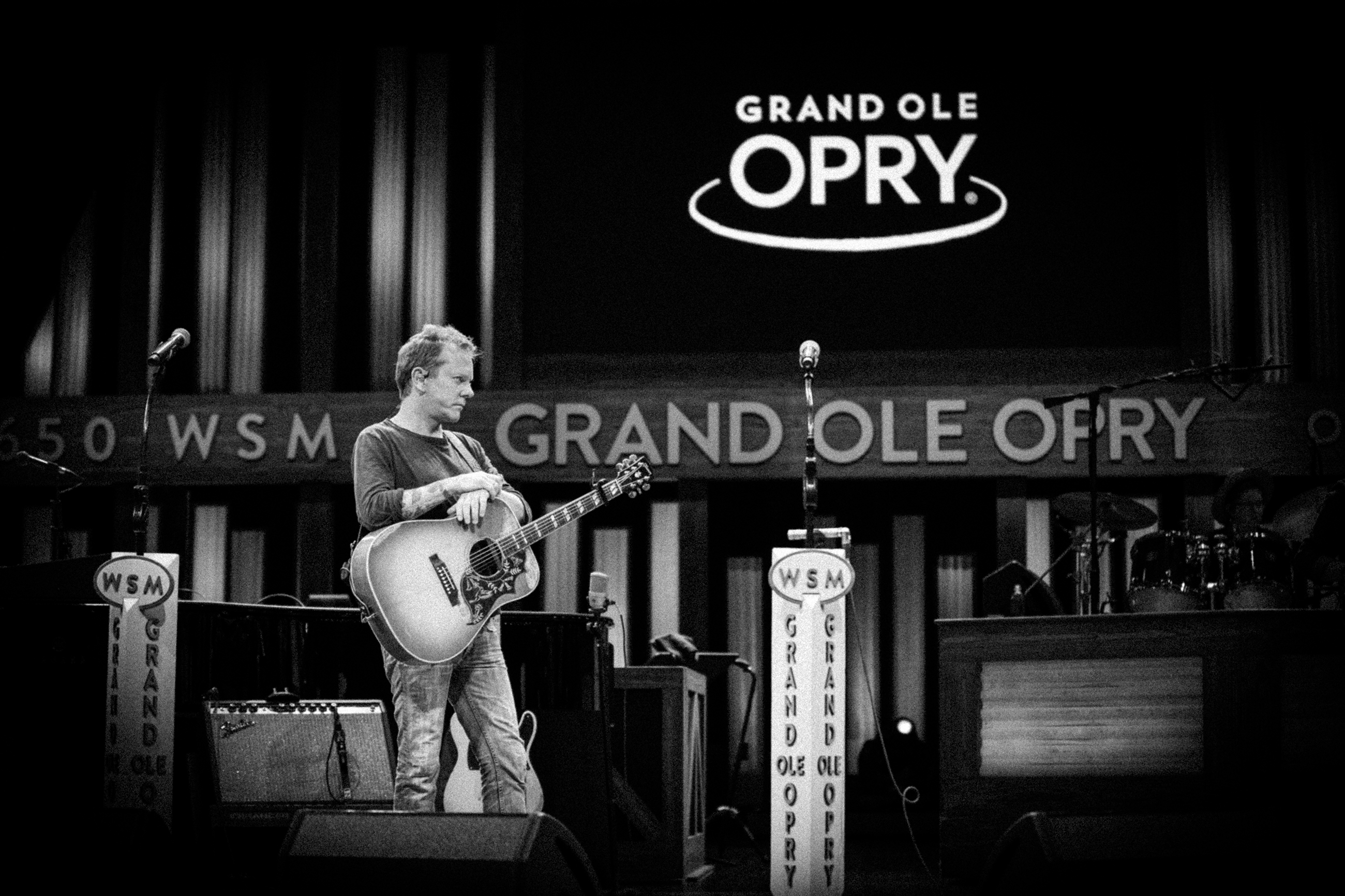 Do you feel like people come to see Kiefer the TV star but leave fans of Kiefer the musician?
I’ve always likened it to a NASCAR race. People say they want to see a good race, and that’s bullshit. You want to see a crash! But if no crash, then maybe you settle for a good race. But I get it, trust me. There is a reason I waited until now: Now, I just don’t give a shit. Fifteen years ago, it wouldn’t have been possible. Jude really had confidence in the way he was making the songs sound, and I couldn’t really argue with him. But it was still really five or six songs in until I acquiesced and said, “OK, I want to do this.” I had to have that come-to-Jesus moment because, trust me, an actor doing music makes my eyes roll in the back of my head, too. So I can’t blame anyone for thinking that, and that’s why we’re prepared to go one bar at a time. It’s the most constructive thing I’ve ever done in a bar [laughs], so it’s working out.

People can’t argue with authenticity of it. You’re writing about your own experiences, you played your own guitar on the album and even recorded the whole thing live in one room.
We recorded basic tracks, and if Brian was going to play drums while I was going to sing, I would have to stand out in the desert. It’s just one room, a door and then there’s nothing out there. So I’d be standing out there doing a vocal while they were tracking inside. I was probably the only singer in a long time who was in danger of being attacked by coyotes while recording a track. It was an intimate setting. Jude is my oldest friend, so there was a safety there to try stuff and see what happened.

The song, “Down in a Hole” is about friend who you lost to alcoholism. What’s significance of making it the title track?
Well, I was going to call it Shirley Jean, because that’s my mom’s name. I just ended up liking “Down in a Hole,” because a lot of songs reflected that sentiment. And Jude Cole’s son, Ethan is a great graphic artist and he did the album cover. It might have just looked better in the context of the artwork than anything else.

Do you have nerves going into your Opry debut tonight?
Yeah, it would be disrespectful not to have something going on! But they settle pretty quick. And one of the things I’ve realized pretty quick with the music is that if you’re not nervous about something on any level then it’s not feeding you back. When we went to shoot Designated Survivor, we had just finished 25 dates in California and it got me excited about working as an actor because I got excited about telling stories in a very different way. So it’s had a nice impact the other way. At a certain age, you get better at handling your nerves and finding out ways to take advantage of them as opposed to letting them destroy you.

You’re covering Merle Haggard tonight. Did you ever get a chance to meet him?
I met Merle Haggard via Skype. We were playing a show at Buck Owens Crystal Palace in Bakersfield and Scott Cox, a big radio guy out there, became a friend of mine very quickly and he said, “Hey, man, wanna talk to Merle Haggard?” So he got Merle on the phone. I was meeting him via Skype through Scott’s phone, and three weeks later he passed away. I only met him for a second, but I thought this would be a nice way to say goodbye to him.