Walking into a midtown Nashville coffee shop for her first cup of the morning, Kelsea Ballerini seems already sufficiently caffeinated as she excitedly talks about her new rescue dog, Dibs. (Yes, he’s named after the latest single from her debut album, The First Time.) She’d been walking the pup earlier when a passerby noted, “Do you know who you look like? That singer, Kelsea Ballerini.” The rising country star just laughed; she’s not used to being recognized. But that’s all changing, and at lightning speed.

Back in June, the 21-year-old made country history with her very first single, “Love Me Like You Mean It,” as its reign atop the country radio charts made Ballerini the first female in nine years to have her debut country tune hit Number One — with the last being Carrie Underwood with “Jesus, Take the Wheel.” And with “Love Me” now certified gold, signifying sales exceeding half a million, the momentum continues with the follow-up “Dibs,” which was the most-added song to country radio within its first week of release and cracked the Top 40 within mere days.

Chatting with Rolling Stone Country, it’s apparent Ballerini isn’t overwhelmed by the fast pace that comes with success. It matches her personality. She’s constantly plotting new elements for her high-energy stage show, she’s already written too many songs for her next album, and Dibs is racking up his own frequent flier miles. We talk with the Knoxville, Tennessee native about the significance of breaking through as a female artist in the male-dominated country music world, along with her incessant comparisons to Taylor Swift and why pop and hip-hop infusions actually make country music more honest.

As great as topping the charts may be, does it also make you a little annoyed at country radio that it took nine years for this to happen again for a new female artist?
Yes and no. Yes, that it’s been that long. No, because they just gave me a Number One and Carrie was the next week’s Number One [with “Little Toy Guns”]. Another girl! And there are a lot of girls on the charts right now who’ll probably have Number Ones or close to it. So it was kinda like someone busting the gate back open.

You’ve been thrown into the gender inequality debate that’s so red hot right now in the country music industry, thanks a radio consultant’s public comments that women are just the “tomatoes,” while men are the lettuce in country radio’s salad. But you didn’t necessarily seek out being a poster child for any sort of musical feminist movement. What’s it been like to be such a big part of this huge discussion?
It kind of happened by default. The whole “tomato” comment happened when Carrie and I were both Top Five. So naturally we were part of the conversation, and I welcome it. I think it’s great.

Carrie is one of several stars who’ve tweeted support for you and your music, along with Little Big Town, Dierks Bentley and Taylor Swift, to name a few.
I remember people telling me early on that the country music community is very welcoming. People cheer each other on and have this respect for each other, and I felt that. During the Number One week, it was a celebration that rippled. So many people were celebrating, which made it even sweeter. 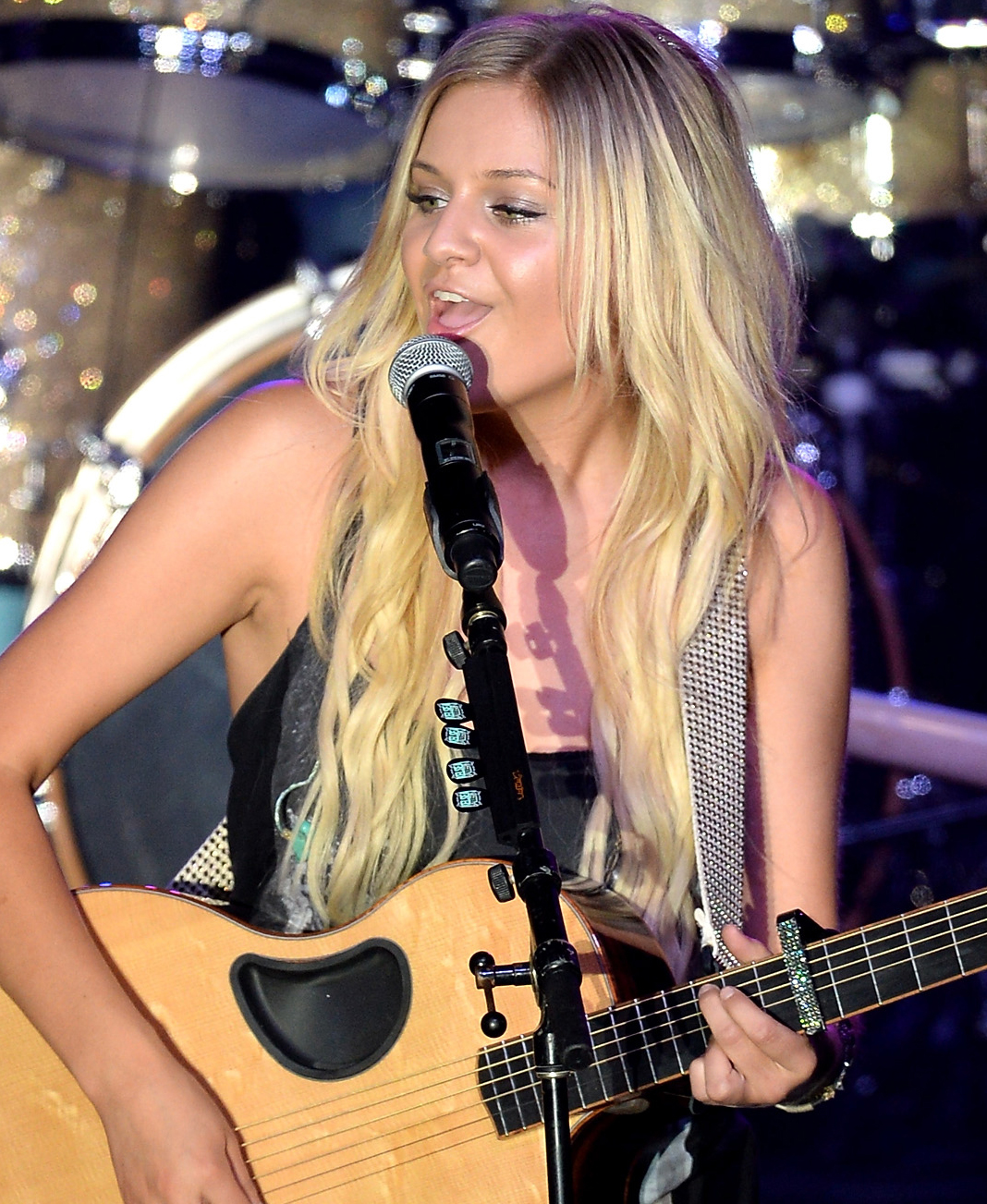 Hillary Scott of Lady Antebellum is another big supporter and one with whom you’ve become close. What advice has she given you in the past year?
She told me, “I just feel called to be a mentor to you.” For my Number One, she got me a necklace with this gold thing that she said is like my golden ticket. She’s amazing. I know I can call her at any point.

I have a picture of me with Lady Antebellum, when they released their first single and I was at CMA Fest as a fan. I’m in flower-power shorts and a headband — so not cute — and I’m fan-girling next to Hillary. I couldn’t believe I was standing next to her. Fast forward to now, and I have cried on her couch several times. That’s been a really cool thing, to go from being a fan of people to a friend of people.

A similar thing happened with Taylor Swift, who has become a friend. But the comparisons between you two happened long before you met — which is pretty much inevitable given your pop-country sound, autobiographical lyrics and young age starting out. But as flattering as the Taylor parallels are for you, you’ve also expressed how it’s important to you to be unique. Is it bittersweet to hear those constant comparisons?
It’s a balance, because I’m such a huge Taylor Swift fan and have been on that side of it with her for so long. If there’s anyone’s career who I’d like to have a sliver of similarity to, it would be hers. So I’m glad for the comparisons. The way she puts songwriting and her fans at the forefront, instead of letting everything else fall where it’s supposed to fall, that’s always something I’ve really respected about her. So if people see that in me, I really hope it’s what it is.

I’ve texted her a few times about a few things and she is hilarious and very bright. She’s such a brilliant one to learn from.

“Love Me Like You Mean It” and “Dibs” are such confident songs about love, with both putting a guy in his place and exerting the fact that you are worth it. Was that a conscious choice, to introduce yourself out of the gate with back-to-back empowering songs?
Definitely. I really wanted to solidify that now. “Love Me” was such a different, left-of-center sound and I really wanted to hone in on that. “Dibs” was the closest to that. It’s like, I’m still gonna be flirty and fun and youthful, but I’m confident enough to call dibs on you. It’s a fun, summer song with an empowerment thing that I love, like in “Love Me.”

Even with “Secondhand Smoke,” it’s such a vulnerable song but the message that I hope people hear is that I don’t have to be like that. As a fan, I connect with realness. Whether it’s strong or vulnerable, if it’s real I can connect with it. Even in songs like “Dibs” and “Love Me,” you still see the fun side. I’m so weird and quirky, and painfully awkward sometimes. And I tell people, “I sing these songs not because I’m confident, but because I have to remind myself to be.” It’s not like I’m saying, “Look how confident I am.” It’s me reminding myself, “Be confident. Value yourself.” So I hope other girls are like, “Love me like you mean it, boy!”

Think back to signing your record deal. What were your expectations? What was the balance of fear versus optimism?
I’ve never been scared, but I’m very naïve. The greatest gift I’ve been given is being naïve, because I don’t know what I can’t do. And when you don’t know what you can’t do, you think you can do everything. I never cared to be on a big label, I knew who I wanted to produce me. . . . I always had this laser-vision of what I wanted.

Speaking of your producers, Forest Glen Whitehead [who co-produced The First Time with Jason Massey] was looking for a “country Beyoncé” when you two got together.
He was telling the publisher, “I want to produce a country Beyoncé.” And he told me, “The first time I wrote with you, I knew that’s who you are. I have to produce you.”

And you have the dance background, too.
I do. Ten years. I did ballet, jazz and all that, but I think hip-hop is really where I leaned rhythm and groove, which has helped me in music.

And you’re not afraid to admit that hip-hop, Beyoncé, Justin Timberlake and Britney Spears are just as big of influences on you as artists singing on the Grand Ole Opry. Do you think country fans have finally progressed past caring about blurring lines?
Yes and yes! I think that the key is respecting the roots and traditions of country music and always putting value in that, but country radio has really opened its arms to other influences. It’s been really cool to me to watch someone like Sam Hunt, whose lyrics and roots are in country but you can hear that he listens to Drake and Justin Timberlake — and that’s OK. It allows songwriters to be more honest, because it’s like, “This is who I’m listening to.” And country radio is accepting that, which allows more honesty, which is what country music is all about!