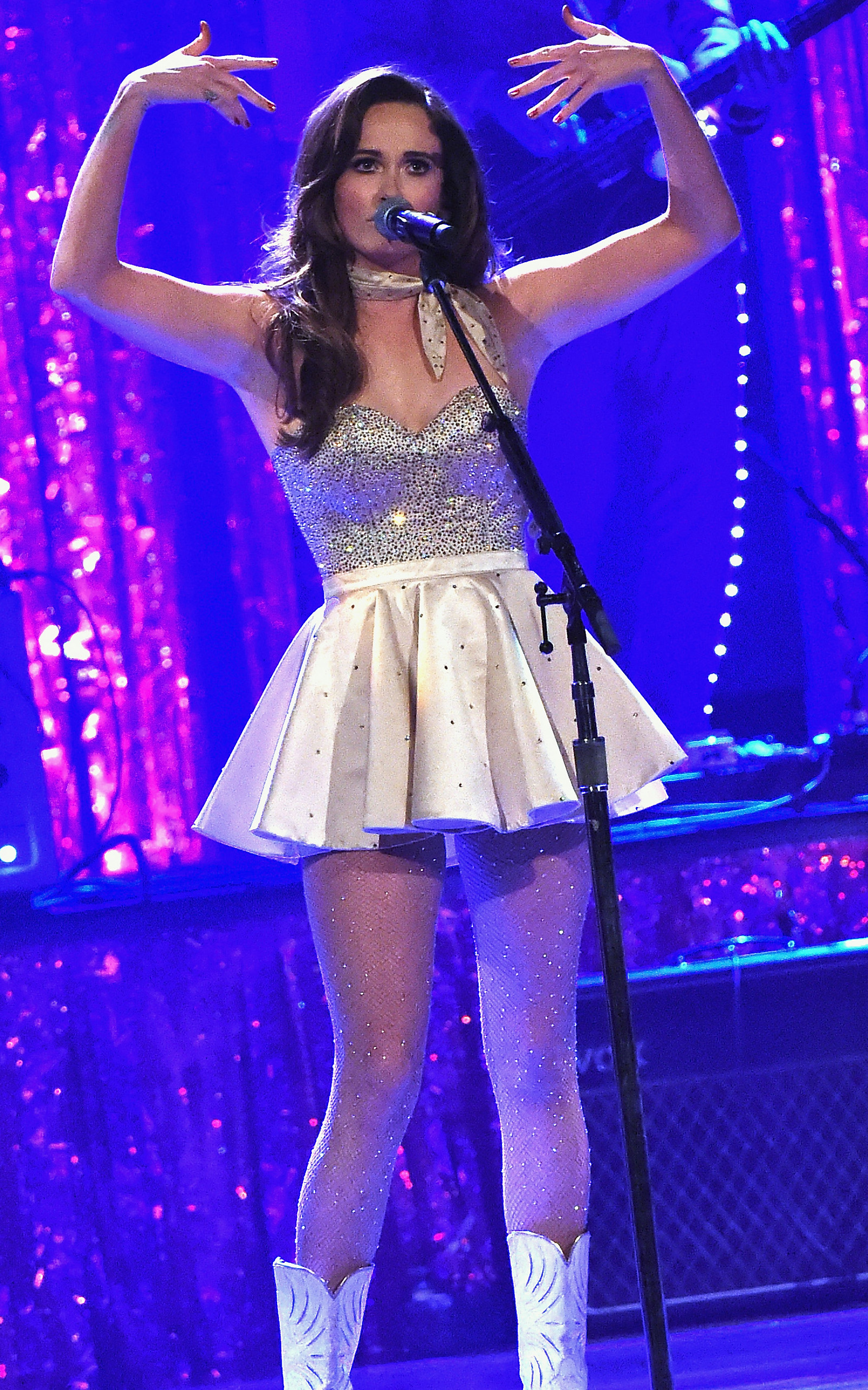 Kacey Musgraves ended her two-night stint at Nashville’s hallowed Ryman Auditorium with a glittery, mirror-balled show that featured songs from both of her acclaimed albums, 2013’s Same Trailer Different Park and this year’s Pageant Material. It was the latter that inspired some of the best moments from Thursday night’s finale.

Musgraves’ tour is titled the Country & Western Rhinestone Revue, but that dated description of the genre is actually a fitting one. The set was decorated with shimmering red tinsel and the singer’s five band members were decked out in pink Western wear (with lighted piping) and cowboy hats, with a disco ball spinning overhead. The whole spectacle evoked a small-town high-school talent contest, which underscored Musgraves’ relaxed vibe onstage. This was her show, a milestone realized, and she wasn’t about to let stuffiness or formality set in. Still, she displayed an obvious reverence for the “Mother Church of Country Music,” especially in her authentic, neo-traditional country songs. On this night at the Ryman, drum loops and Nineties-rock guitars were verboten.

That’s not to suggest that everything in the set list for the nearly two-hour show was traditional. A spirited cover of TLC’s turn-of-the-millennium R&B smash “No Scrubs” had the audience singing — and rapping — along in delight. And the encore yielded a zippy take on Nancy Sinatra’s “These Boots Are Made for Walkin’,” at which point Musgraves’ pink cowgirl boots lit up and Americana hero Buddy Miller appeared onstage to deliver some blazing electric guitar with her band, which also included a string section. (During Musgraves’ Wednesday-night performance, Sheryl Crow sat in.)

It was Musgraves’ own exemplary songwriting, however, that elevated the evening. Highlights included a chill-inducing solo version of her breakthrough hit, “Merry Go Round,” the anthemic “Follow Your Arrow” and the touching “It Is What It Is,” all from her award-winning debut LP. During a performance of her latest album’s title track, “Pageant Material,” a fan gifted Musgraves with a pink sash reading “Ryman Material,” a gesture she clearly appreciated, judging by her repeatedly asking the fan if she could actually keep it.

“Good Ol’ Boys,” the should-have-been-a-bigger-hit “Biscuits” and current single “Dime Store Cowgirl” also represented Pageant Material. Of “Cowgirl,” Musgraves explained the song was inspired by an encounter with a woman who was critical of the way she was wearing her hat during a performance — when she was just 11 years old. “I wonder where that lady is now,” she mused. She also gave her band a chance to show off skills other than their musicianship in the “talent portion” of the evening, which included juggling and mimicking a dog bark.

Before Musgraves and company left the stage for good, the ensemble closed the show with a sweetly rendered a cappella version of Roy Rogers’ signature send-off “Happy Trails.” Musgraves isn’t exactly riding off into the sunset, however. The Country & Western Rhinestone Revue continues this weekend in Mineola, Texas, with an event aptly dubbed the “Hometown Hang” — Musgraves was born in the nearby community of Golden.