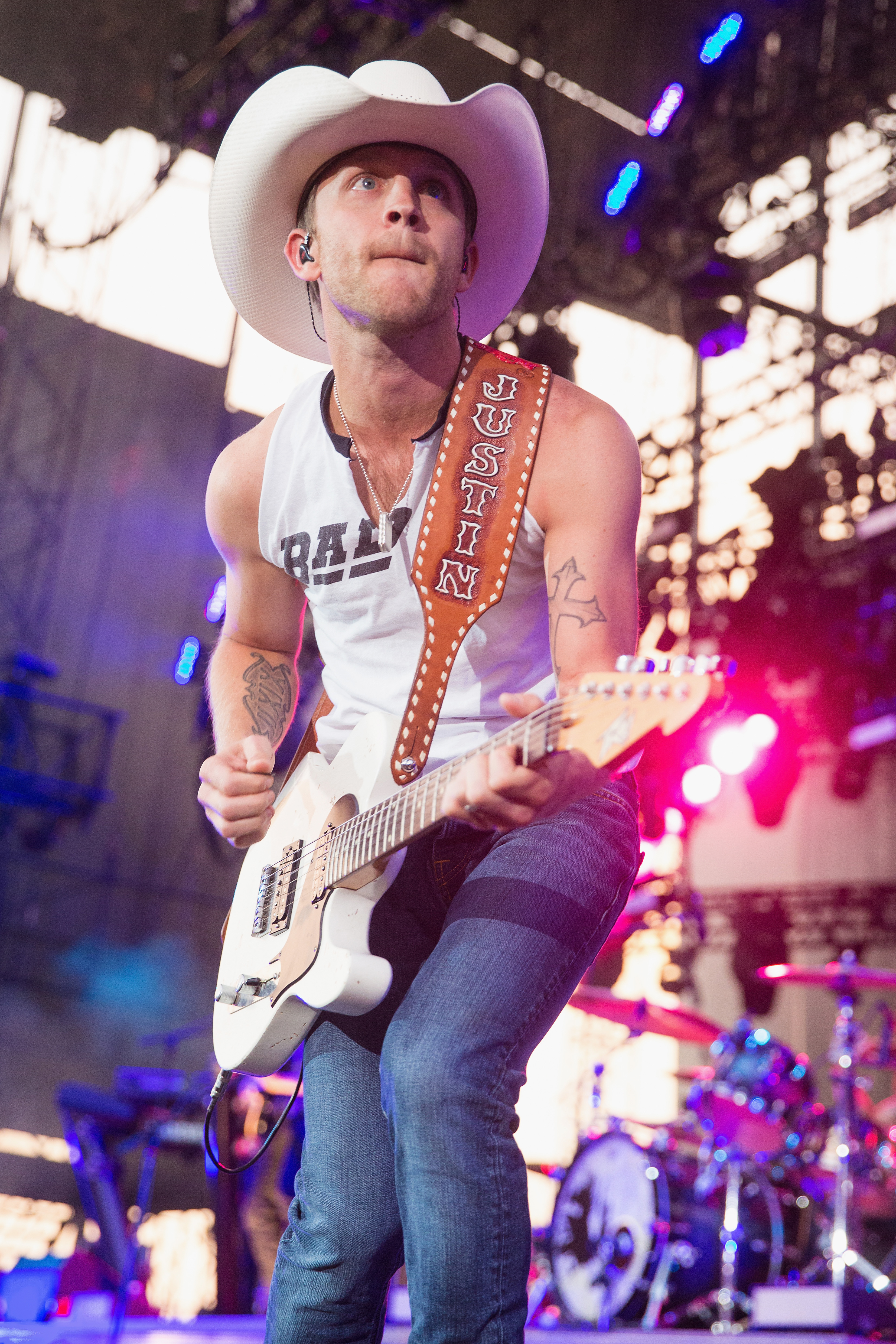 On Friday night in Knoxville, Tennessee, during a stop on her Certified Platinum Tour, Miranda Lambert proved she knows how to pick just the right tourmates. Both The Voice alum RaeLynn, who opened the show, and Arkansas native Justin Moore turned in sets that complemented their hostess in sound and attitude.

For Moore, the tour is a reunion with Lambert. The pair hit the road together last summer. “I don’t think anyone has toured as much with Miranda as me. We’ve been on five or six tours together,” Moore tells Rolling Stone Country. “We enjoyed doing our own headlining tour last year and had some success with that, and we were gearing up to do that again this year. Then she asked if I wanted to [team up]. She’s one of a very small group of people who I’m willing to go out with.”

The singers — who each come by their distinctive twangs naturally — have also recorded together. Lambert joined Moore on the weeping duet “Old Habits” on his latest album, 2013’s Off the Beaten Path. Alas, the red tape associated with releasing a single to radio by artists on different labels — Moore is part of the Big Machine Label Group family; Lambert resides under the Sony umbrella — has kept the track a deep album cut.

“I’d love nothing more for the opportunity for that song to be a single,” says Moore. “But there’s backroom stuff that the fans don’t really care to hear about that make it at least challenging to do that.” As well as the fact that both artists had two other duets released recently: Moore cut the Mötley Crüe power ballad “Home Sweet Home” with Vince Neil for the Nashville Outlaws tribute, and “Small Town Throwdown” with Brantley Gilbert and Thomas Rhett, while Lambert recruited Carrie Underwood for “Somethin’ Bad” and appeared on Keith Urban’s “We Were Us.” Still, Moore remains optimistic. “You never know in this business,” he says. “I wouldn’t say 100 percent it won’t happen.”

Nonetheless, Moore — who was named New Artist of the Year at last year’s Academy of Country Music Awards —  is busy working his latest single, “This Kind of Town,” the third from Off the Beaten Path. Previous Path releases “Point at You” and “Lettin’ the Night Roll” both went Number One. “It’d be nice to go three for three,” says Moore, comparing the new song to his breakout chart-topper, 2009’s “Small Town U.S.A.” “It’s like vintage us, if you will. This song is at the very core of what it is that I stand for, not only as an artist but as an individual. I love the song and the fans are digging it, and hopefully radio will like it too.”

Moore says he is already working on the follow-up to Off the Beaten Path, having written about a third of the project. “I wrote more last year than I ever have in my career. I haven’t yet decided what the new album will be or what I want it to be, but I want to do different stuff every time out,” he says, going on to pledge his allegiance to a classic country sound. “I don’t want to give up on traditional country music at all, but at the same time, I have to continue to stay relevant.”

Even if he admits he doesn’t listen to anything that came after Don Williams, Vern Gosdin and Hank Williams Jr.

“My wife and I took a trip with Thomas Rhett and his wife to Hawaii this year over New Year’s. He [was talking about this] one guy who was like the biggest artist in the world and I never even heard of him,” Moore shrugs. “I feel like I’m an old soul.”