If the thought of the Country Music Hall of Fame and Museum conjures images of black-and-white photos or relics of a bygone musical era, think again. A new exhibit titled “American Currents (The Music of 2016)” aims to highlight the trends and achievements of country music in the present tense.

Running through 2017, the exhibit offers memory-jogging totems from the previous year’s significant moments and faces, because as museum director Kyle Young points out, Elvis Presley didn’t make old time rock & roll – he was a man of his times.

“This museum bears testament to music history,” said Young during an opening-night gala this week in Nashville, where he welcomed the exhibit’s first round of guests, including Jason Isbell, Florida Georgia Line, Brett Eldredge and William Michael Morgan. “We are the caretakers of [Bill] Monroe’s mandolin, Mother Maybelle’s guitar and Elvis’s gold Cadillac. … But to bear proper testament to music history, we must bear testament to the present, because history is born in the now.”

Among the contemporary, fashion-forward items on display are the jacket and vest worn by Chris Stapleton on the cover of his debut album Traveller; the revealing yellow dress Miranda Lambert wore to last year’s ACM Awards; the windblown gowns from Kelsea Ballerini’s “Peter Pan” video; and the plain black T-shirt Luke Bryan favored during his Kill the Lights stadium tour.

“American Currents” also spotlights an abundance of instruments and hand-written lyrics, helping to place today’s music in the context of country’s past. Many items are juxtaposed next to artifacts from legends like Buck Owens or Reba McEntire.

“I walked in there and I’m like, ‘Look at that, I’m right there next to Ronnie Dunn,’ who’s my favorite singer ever,” said Eldredge, whose tux from the 2014 CMA Awards sits alongside Dunn’s collarless blue suede jacket. “It hit me out of nowhere; I wasn’t prepared.”

Along with heavyweights like Bryan and Lambert, “American Currents” also profiles newer artists, from Eldredge to RaeLynn, whose eye-catching ensemble is on display next to one worn by Tammy Wynette.

“I feel so honored to be next to such a queen in country music,” said the “Love Triangle” singer. “But I didn’t cry, because I don’t believe that was me.”

Illustrating the Museum’s broad definition of country music, a selection of Americana and bluegrass artists were also chosen for the exhibit, including Grammy winner Jason Isbell. His display of lyrics and instruments is sandwiched between those of the Earls of Leicester, a bluegrass supergroup led by Dobro master Jerry Douglas.

“It’s pretty incredible to be included with those folks,” Isbell said. “It’s another thing that proves to me that I live in the right town. When I moved up here from Alabama I wasn’t sure – with the type of music I make and the type of person I am – that I would feel welcome, but I do. This is definitely above and beyond anything I could have imagined.”

Rootsy breakout star Margo Price recalled serving drinks as part of the Hall’s wait staff just three years ago, deeming this honor the cherry on top of a year that saw her perform on Saturday Night Live and win the trophy for Emerging Artist of the Year at September’s Americana Music Honors & Awards. That piece of hardware found its way into the Hall’s collection. 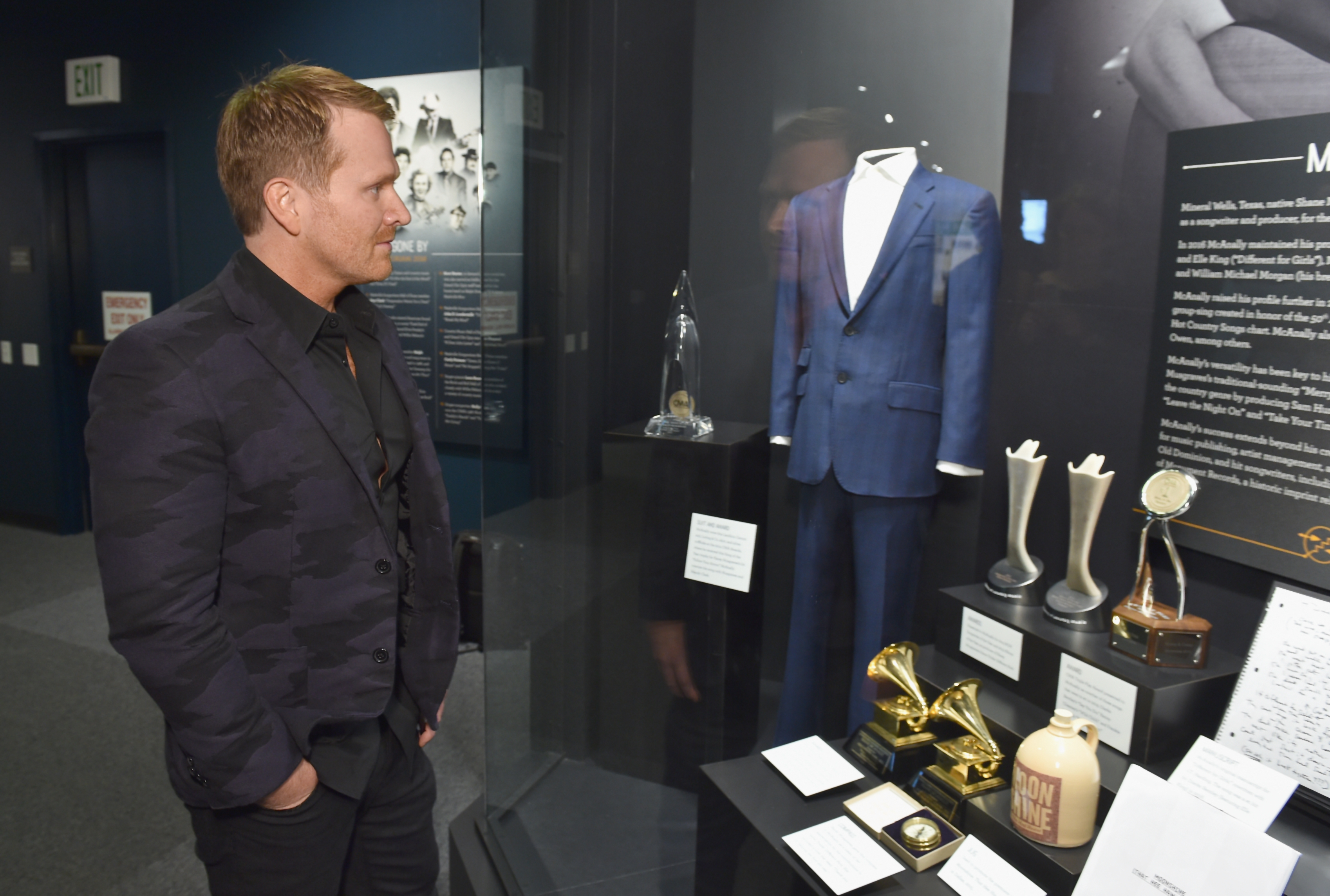 “I never dreamed I’d have some possessions of mine sitting next to Dolly Parton and Randy Travis and John Prine,” Price said. “[The museum staff] came over to my house and I was wearing sweatpants. They were picking up things that were laying around like, ‘Hey, do you want this?’ I had just gotten my Americana Award and it was on the kitchen table, so I said, ‘Here you go!'”

But the most interesting aspect of “American Currents” may be the focus it places on a group that used to fly under the radar – Nashville’s songwriting community. Hitmakers like Shane McAnally, Lori McKenna, Natalie Hemby and Ross Copperman all have displays alongside the stars, evidence that their contributions are becoming more visible.

“That really is something [country music] does that other genres don’t,” said McAnally, referring to the praise the genres heaps on behind-the-scenes tunesmiths. “I think there’s a newfound interest in songwriters. The artists are shining a light on it, so that has been a new twist for us to now be a little closer to the limelight.”

“I’m going be honest,” said Hemby, “I thought it was going to be a lobby deal, like, ‘Here’s a little thing in the gift shop.’ You just never think anything you do would end up in a place like this.”

The “American Currents (The Music of 2016)” exhibit is open now at the Country Music Hall of Fame and Museum and will run through the end of this year.